Expanding highways and removing homes is one of the great creation myths of Los Angeles. The theory: Where the highways grew, progress would follow. But often that expansion came at the cost of homes in working-class neighborhoods like Boyle Heights. “Getting there” was more important than the actual “there.”

When Downey resident Alexandria Contreras heard that proposed designs for expansions on I-605 and I-5 could include the demolition of hundreds of homes in southeast LA County, she felt a kind of generational deja vu. Contreras feared that her parents’ home, where she grew up, was on the chopping block. If so, it would mean three generations affected by highway expansions.

“My grandparents lost their house, the house that my dad grew up in, to a freeway project when he was a kid,” she said. That house was in Boyle Heights.

“That will be three generations of wealth, just gone for freeway projects that have historically ran through Black and Brown communities. … This is not just me. This is everyone I grew up with, essentially. They're all going to have their homes potentially taken away or have the freeway move closer.”

So this is a freeway story. It’s about things moving slowly and rapidly. The slow things are bureaucratic and the rapid things are public opinion. Can you really tear down a neighborhood to build a freeway in LA in 2020?

The project in question is the I-605 Corridor Improvement Project, a massive, LA-style old-school freeway plan. Among other things, it could add new lanes and exit ramps along 16 miles of I-605 and a stretch of the I-5 and other highways in southeastern LA County. 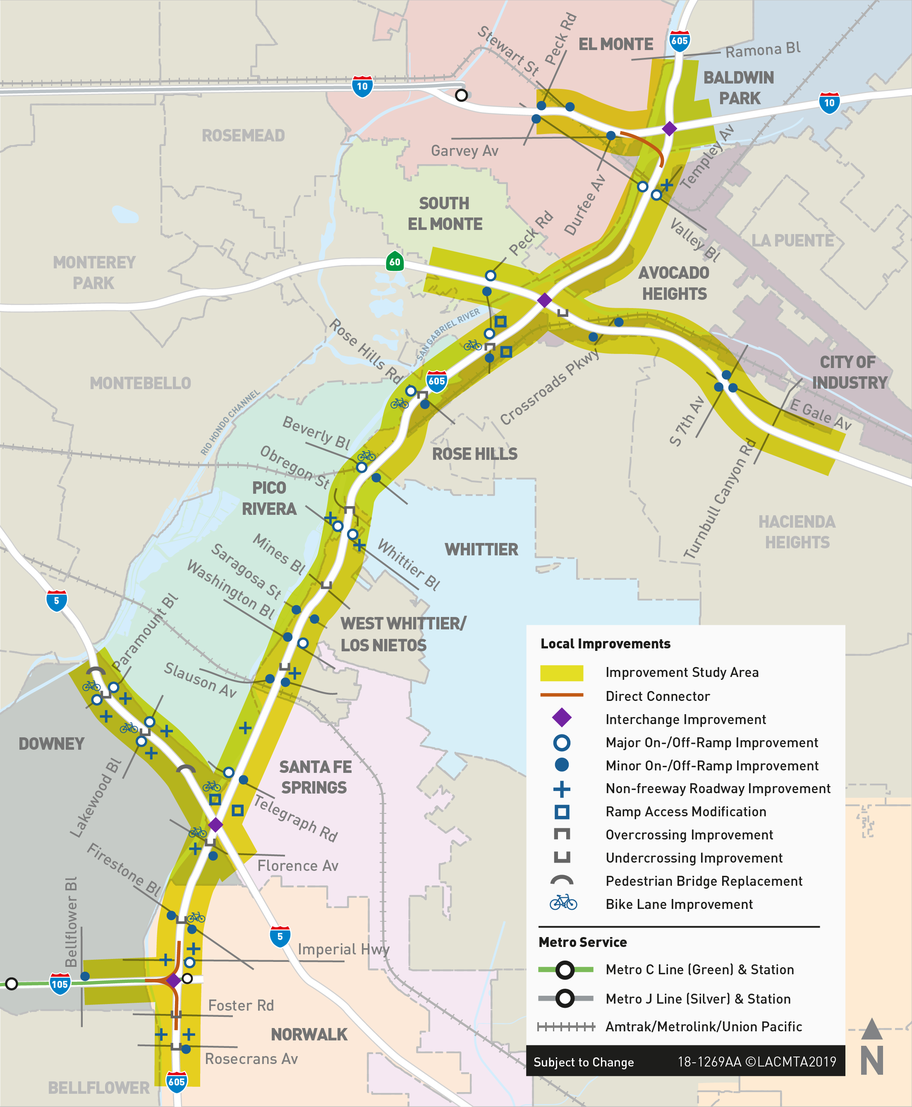 The project as presented would require significant “right of way impacts,” which is planner-speak for houses that would have to be eminent domained. That includes as many as 300 homes, most of them in Downey, Santa Fe Springs, and Norwalk.

So for some, the I-605 Corridor Improvement Project calls up the specter of previous infrastructure projects that displaced Latino communities.

But this is a highway project. Highway projects are the gold-plated Galapagos tortoises of engineering endeavors. They’re expensive and they take forever to get anywhere.

And LA Metro says fears of looming bulldozers are overblown.

Metro’s Measure M includes $590 million for work on the 91/605/405 corridors. But the I-605 project would require an estimated $1.1 billion, which hasn’t been shaken out of any municipal couch cushions yet.

Ansari says that Metro researched its options when putting together its “Draft Environmental Impact Report/Environmental Impact Statement,” including a set of alternative highway designs that propose adding lanes and restructuring some existing lanes to be HOV or Express.

But Ansari emphasizes that these decisions will be made by the communities themselves.

“That decision is made by the locals that are being impacted when we go to the environmental process,” he said. “This is simply sharing information. If we want to fix the problem, this is what it takes. ... Should we look for other types of projects? Should we be looking into anything other than impacting properties? And if the public answer is yes, that's the end of the road for that.”

What about this thing called induced demand?

“There's no situation in a vital growing economy under which expanding a roadway to fight congestion makes much sense,” said Michael Manville, an urban planner at UCLA. He thinks of highway space as valuable land that we treat in a sort of ridiculous way, economically speaking.

“We offer it to people for no direct charge. And so as a result at times, when lots of people would like to use it, there is more demand for the [highway] than there is actual [highway] in existence. And so we end up with congestion.”

Manville’s talking about “induced demand” or “induced traffic.” It starts by reconsidering the idea that congestion is just a simple problem of too much demand. If there’s too much demand, one solution is to increase the supply, right? More freeway. Except the problem is that you’re giving away the extra freeway for free. So more people are going to take advantage of that. Soon enough, the wider highway is bumper to bumper too.

Induced demand is not fringe. Many urban planners consider it a deal breaker for expansion projects, at least until you try pricing the roadway first.

“If Starbucks opened each morning and gave away coffee, it would run out,” said Manville. “But Starbucks has figured out that if it charges $2 for a cup of coffee, it's never going to be in a position where it just has totally run out of coffee. The price deters enough people from buying it that it doesn't cause a shortage.”

Metro’s Ansari doesn’t think induced demand is a thing. It’s not a coffee. It’s a river.

“Traffic is like the river. ... The river never stops, never rests. It keeps going. Traffic has the same nature,” he said. “If you open up one or two lanes on US-101, you have actually saved the neighborhoods and preserve the quality of life in those neighborhoods because you're recollecting the water back into the river bed.”

There’s a significant body of research that suggests induced demand is very much a thing, that highway-expansion projects nationwide solve no problems. Remember Carmageddon in 2014?

One study looked at traffic data and concluded that rush hour speeds after the 405 expansion actually got worse. Now, Metro did its own study that showed conditions had improved on 405. But it’s worth noting that Metro’s study came out the year after construction, while the former study, the critical one, looked at a bigger data set through 2017. And you can find this pattern of congestion in highway projects nationwide. And with more traffic congestion, you get worse air quality, more greenhouse gases, and so on.

The proposed home demolitions set off alarm bells not only in the affected neighborhoods, but even among Metro’s partners.

Now what? “Sharpen the pencils, take a closer look at the drawings, sit down around a table or what passes for that these days over Zoom. And really work closely with the cities and they have agreed to do that, absolutely,” said Nancy Pfeffer, Chief of the Gateway Cities Council of Governments.

Meanwhile, Supervisor Hilda Solis, who represents some of the areas where homes would be destroyed, brought a similar motion to Metro’s Board of Directors, which passed unanimously. The desire to find an alternative to ripping down homes is strong, and at this point, bureaucracy appears to be working. And sort of quickly.

Early next year, Metro will come back to the table with new alternatives that, presumably, won’t involve home demolition. Sup. Solis says that 21st century values are slowly creeping in.

“I think it's just a whole new way of looking at issues. When we talk about building freeways, we should be talking about really not displacing people, but making sure that we take care of families and keeping them together and not destroying their very livelihoods,” she said.

“We've had a history here in LA County. … all the people that were displaced with all the freeways at 10, the 5, all of that. We don't want to see a return to that mode of thinking. We've got to be smarter at it. And we should be thinking about equity, but also climate change and how we can reduce our carbon footprint.”

Expanding highways and removing homes is one of the great creation myths of Los Angeles. The theory: Where the highways grew, progress would follow.

The “happiest place on earth” will be closed through the “most wonderful time of the year.”