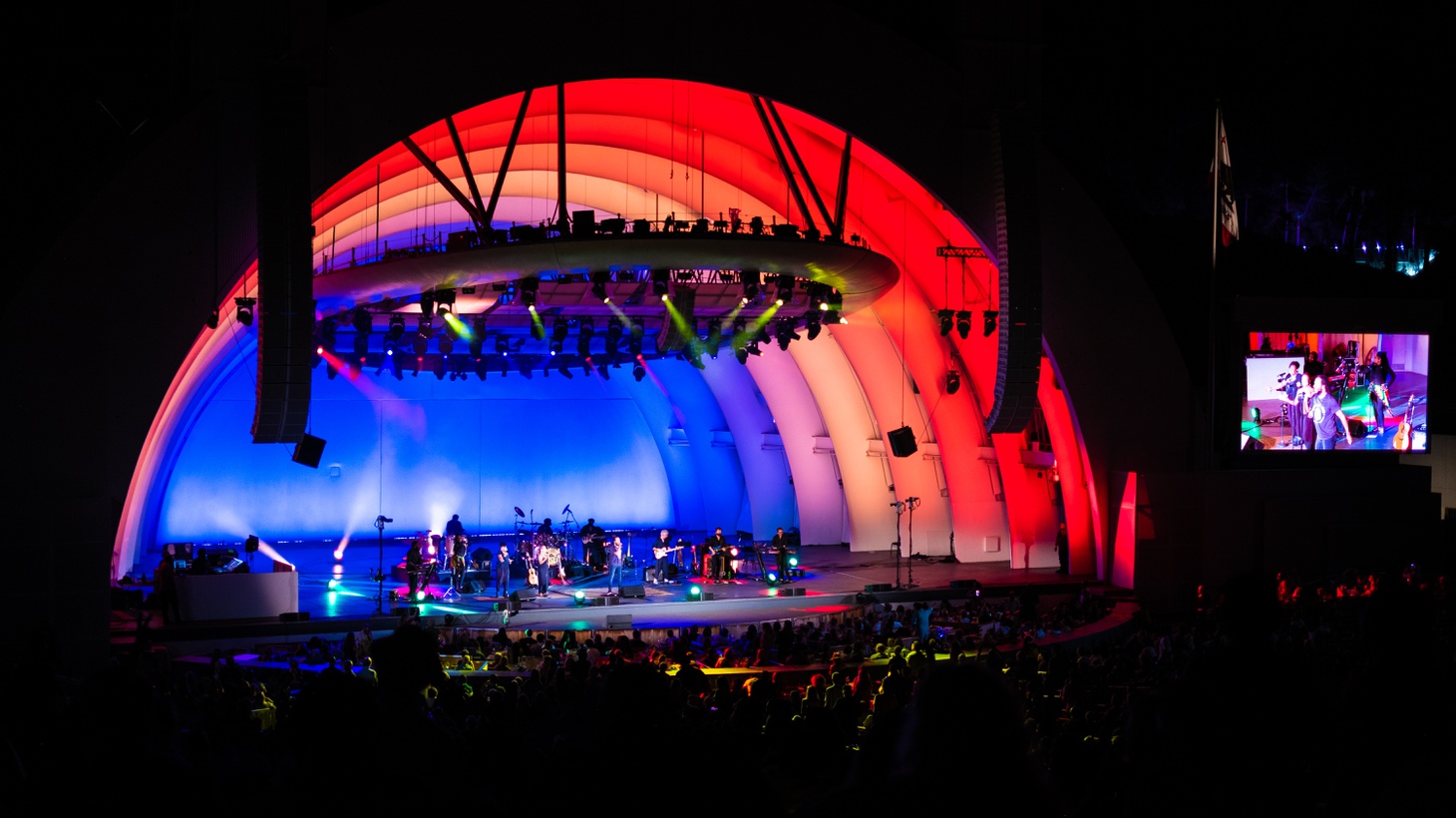 Today, the Hollywood Bowl reports that about 1.5 million Southern Californians head there each summer to soak up a night of music and fun. It’s become a rite of passage that gives way to a full-bodied experience. Concert-goers pack snacks and maybe even a bottle of wine, track down parking spots, and hike up that hill — all to enjoy musical performances under the open LA sky.

We recently asked KCRW listeners to share their favorite night or memory at the Bowl. Here are some of their stories.

Lorna Tansey worked as an usher — part of a group of about 100 — during Survival Sunday, an anti-nuclear rally at the Hollywood Bowl in 1979. She distinctively remembers watching Bruce Springsteen and the E Street Band during soundcheck.

“Suddenly everything stopped. The earth stopped rotating. All the ushers just stopped in their tracks and we were absolutely mesmerized,” she recalls. “I had never heard him before. ... It was like the whole world was filled with music, and we were just nestled and safe in a little bowl in the mountain. It was absolutely amazing.”

When Dana Ross was 13 years old, he had the chance to watch Jimi Hendrix perform alongside a neighborhood friend and their family. He viscerally remembers the nervousness he felt when an usher guided them to their seats, but all of that was swept away when Hendrix started to play.

“I had heard Hendrix on the radio and on records, and I knew even at that age, and he was amazing,” Ross says. “He was great live, and I was impressed that just three guys could sound so full and fill up the sold-out Bowl with so much sound.”

The show went off the rails when fans jumped into the fountain and on stage as Hendrix played.

“One guy, who was all wet, started to get up on the stage. Jimi didn't move and kept playing and singing. The bass player, Noel Redding, looked like he was afraid of getting electrocuted. He started to back away from the guy who ended up trying to jam his hand into one of the amps,” Ross notes.

He adds, “I grew up in LA and was lucky to see a lot of great bands who played here, including Cream, Led Zeppelin, David Bowie, The Who. Seeing Jimi Hendrix at the Hollywood Bowl so close up from that first concert was unforgettable.”

In celebration of her 50th birthday, Laura Perry got some of her best friends together to watch her favorite band — Pink Martini — play at the Hollywood Bowl.

“After we wined and dined, we headed up the hill and took our place in the audience right before the show began. Pink Martini did not disappoint,” Perry says. “As always, Thomas Lauderdale and China Forbes were incredible. They played so many of my favorite songs including, ‘Amado Mio,’ ‘Eugene,’ and ‘Hang on Little Tomato,’ as well as their striking rendition of ‘Bolero.’ It was a night I will never forget.”

Lacy Rainwater had the chance to catch the godfather of soul himself for her 18th birthday, and says James Brown blew her away.

“[He] had the energy of that crowd. … It felt like soul was hitting just right that night. And I realized I had been gifted the trees, the air, the hug of an amphitheater that was so organic in every way. And [I began] my love affair with the Hollywood Bowl.”

John Calderon was an LA city inspection supervisor on the 2003 renovation project of the Hollywood Bowl. During the job, Calderon says he carved his initials into the historic institution.

“My initials are all over the arches under a couple layers of paint. We’d arrive at the Bowl early enough in the morning to see the mule deer come down out of the hills and into the stands. We would leave apples down on the tables for them to take,” he explains. “We would all take a few moments to enjoy the silence and serenity of that scene before we got to work and replace the silence with the sounds of construction”

In total, Tommy Rasera says he’s been to the Hollywood Bowl at least 77 times. His first show was a Belle and Sebastian and The Shins concert in 2006. He’s been attending enough shows that he even has a favorite section: X2. His friends affectionately refer to it as “The Rasera Suite.”

“At the start of every season, they sell a bunch of $1 seats up in [that] top section. So for the past few years, I’ve bought a bunch, usually like four seats. I'll bring friends, sometimes even go solo,” he says. “Don't get me wrong, sitting close is cool. But there's something about being at the top row at the bowl. That's just magical.” 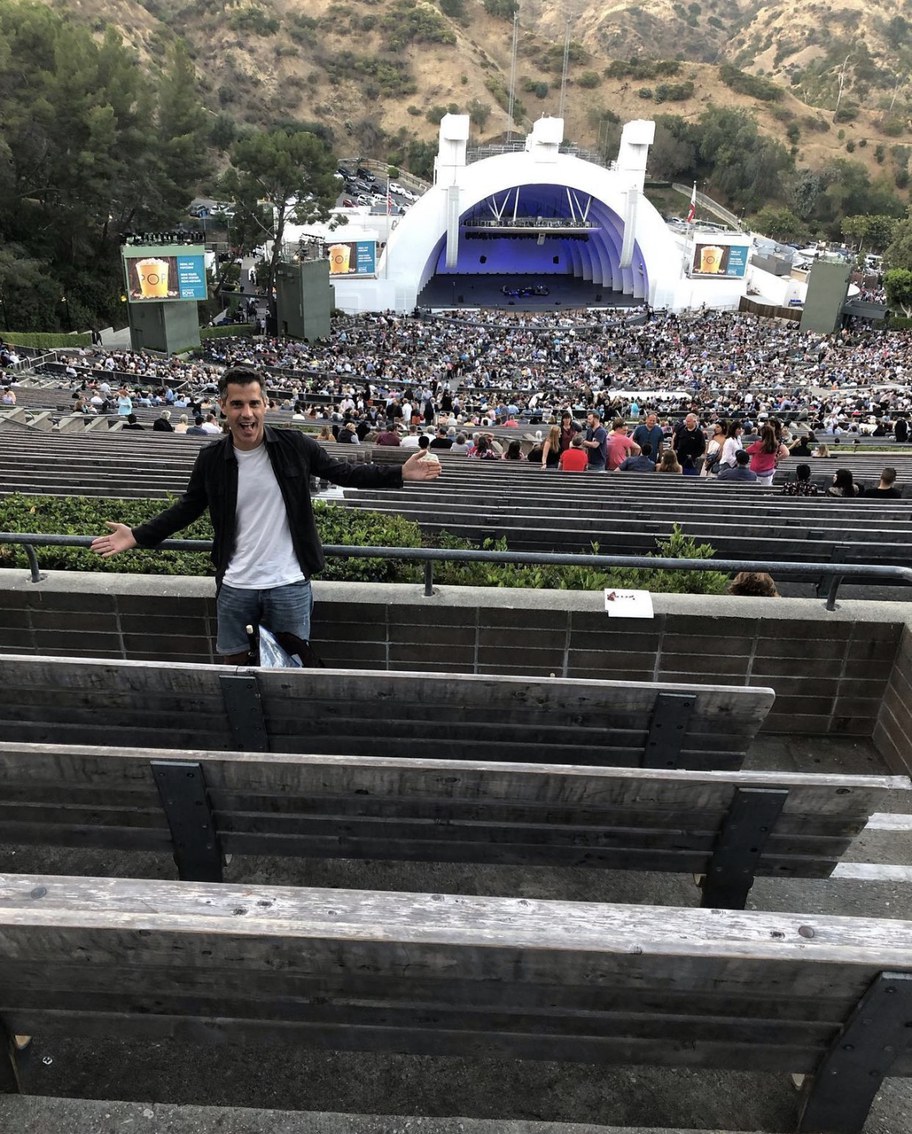 Tommy Rasera stands in the X2 section of the Hollywood Bowl before a Tony Bennett show in 2012. Photo courtesy of Tommy Rasera.

The Hollywood Bowl celebrates its centennial this July. KCRW looks at its origin story and legacy in LA.

The Hollywood Bowl reports that 1.5 million Southern Californians see a show each summer at its iconic venue. KCRW listeners share their favorite experiences.

At Craft Contemporary, an exhibit includes portraits of farm workers that are drawn onto cardboard boxes, and another features quilts that reference a 1960s LGBTQ magazine.