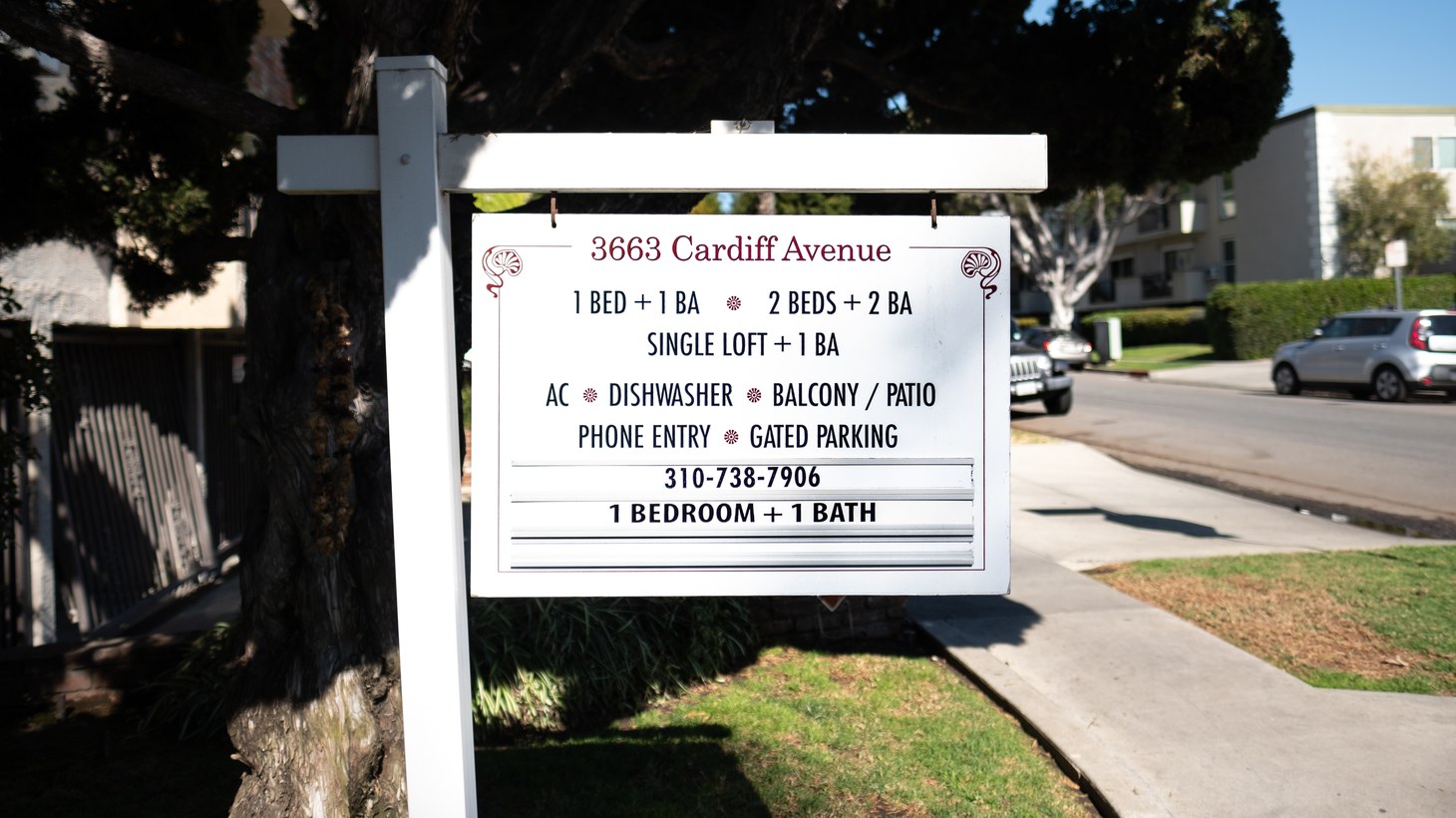 An apartment rental sign is placed along Cardiff Ave. in the Palms neighborhood of Los Angeles. Photo by Amy Ta.

Los Angeles implemented some of the nation’s strongest renter protections amid the pandemic. But a proposal being considered by the Los Angeles City Council might allow landlords to resume evictions for rent nonpayment starting next year. It would also bring back rent hikes for tenants in rent-controlled apartments starting in 2024.

Efforts at the state level to help tenants who fell behind on payments have resulted in $1.5 billion being distributed to low-income Angelenos. But Liam Dillon, housing affordability reporter for the Los Angeles Times, says his research showed these funds were often “difficult to access,” particularly for tenants who lived in buildings owned by non-corporate landlords.

Tenant organizers report that evictions have continued in Los Angeles throughout the pandemic. While the current protections give tenants who are behind on rent a defense against an eviction in court, landlords can still file unlawful detainers.

René Christian Moya, an organizer with the Debt Collective and the Los Angeles Tenants Union, worries that ending these protections will make evictions more frequent.

“We know and have experienced a surge of evictions in LA County. … We believe that the evictions are already at the level that they were pre-pandemic and likely to go higher,” he says. “I'm fielding a ton of phone calls on a day-to-day basis, hearing the desperation in the voices of a lot of these tenants.”

“It's the ability for owners to be able to start paying to repair things with the property, to cover their debt services, to not have to come out of pocket,” he says.

He estimates that the buildings he works with are coming out of the pandemic with a “less than 1% eviction rate,” and says that owners tried their best to work with tenants to keep them there.

“They don't want to evict, they care about their elderly tenants,” says Williams. “It was very tough.”

But Moya says organizers with the Los Angeles Tenants Union saw many people displaced by these non-corporate landlords — often in ways that were illegal.

“What we actually saw was a lot of small ‘mom-and-pop’ landlords engaging in illegal lockouts,” he says. “Sometimes the landlord themselves, the property manager, oftentimes hired goons would come in and kick people out of their homes physically, often assaulting the tenants and throwing people's goods out onto the street, and trying to get the cops to be involved.”

Moya feels that Los Angeles officials should not only preserve the current renter protections, but should increase them. He says stronger enforcement of the city’s tenant anti-harassment ordinance and a right to counsel for financially-struggling tenants could help stem the tide of evictions.

Tenants who can’t stay in their homes will face an increasingly tight housing market, says Dillon. Despite rents dropping near the beginning of the pandemic, they’re up again.

“A newly leased [two-bedroom] goes for about $2,200 a month, and that's nearly 10% higher than what it was in March 2020,” he says. “And so even though there was that decline, these numbers are back and obviously making it harder for tenants, particularly at a time of rising inflation.”

Dillon also points out that economists say the only real long-term solution to the crisis of affordability is to build “a lot more housing and having it available to people of lower incomes, or providing vouchers and things like that.”

Williams asserts that in this economy, rent hikes are necessary for landlords to provide the “same quality of service” for renters.

“The problem in the market is we have to raise rents because the owners’ expenses to maintain the buildings are going up with increasing minimum wage, increases in expenses, increases in gas,” he says.

But taking away protections while rent prices are up means that more people will likely be displaced, says Moya, and they might ultimately wind up without a home.

“The pipeline to homelessness starts with evictions, it starts with tenants getting priced out of their homes and out of their neighborhoods. It starts with landlord harassment of tenants. That is the actual crisis that we're confronting in the city and the county. And as long as we don’t face up to that fact … we are never going to get ahead of this crisis,” says Moya.

LA City Council is considering a proposal to end COVID-era eviction protections. Landlords say they need the income amid inflation. Activists worry that this will lead to...