Beny Ashburn (right) and Teo Hunter (left) are determined to protect the city’s culture through their brewing company, Crowns & Hops. It will be the first Black-owned brewery in the city. Photo courtesy of Crowns & Hops.

Inglewood is in the midst of a development boom, with multiple housing projects planned, a light-rail train line set to open next year, and the nation’s newest and most expensive football stadium hosting the Super Bowl in February.

Beny Ashburn and Teo Hunter are determined to protect the city’s culture through their brewing company, Crowns & Hops. It will be the first Black-owned brewery in the city.

“One of the things that was important to us, specifically for choosing the city of Inglewood, is we truly wanted to create something that felt and looked and sounded like the culture that's already here,'' says Hunter. “One of the first things that you typically see in a gentrifying community is a white-owned brewery.”

The likelihood of seeing a white-owned brewery in a changing community is high. According to the Brewers’ Association, a national trade group representing the craft beer industry, fewer than 1% of 8,000 breweries nationwide are Black-owned. This lack of diversity should not be attributed to a specific factor.

“The craft beverage industry doesn't exist in a vacuum. It's a part of the broader social, economic, political climate of the United States,” says J. Jackson-Beckham, PhD and the Brewer Association’s Equity & Inclusion Partner. “And if we are seeing inequities in our industry, it's only a reflection of what's going on in the United States more broadly. Generational wealth is a massive barrier for people who are thinking about entrepreneurship in what is a capital intensive industry. And it takes a fair amount of outlay to get up and started in the industry.”

Six years ago, Ashburn and Hunter experienced the lack of diversity  first-hand. To address this problem, they began organizing and sponsoring events, specifically for Black and Brown communities to create safe spaces and a sense of belonging. From the beginning, they used their personalities to create their brand. They sold t-shirts that said "Black People Love Beer" and built a following on Instagram even before they had their first craft beer to sell.

“For us, we've always just led with the culture aspect of it,'' says Ashburn. “We knew in creating these spaces where people could feel themselves and see themselves in the curated experience, we knew that the community would start to form itself. And that's exactly what happened. People started coming to our events and people started engaging with us on social and conversations.” 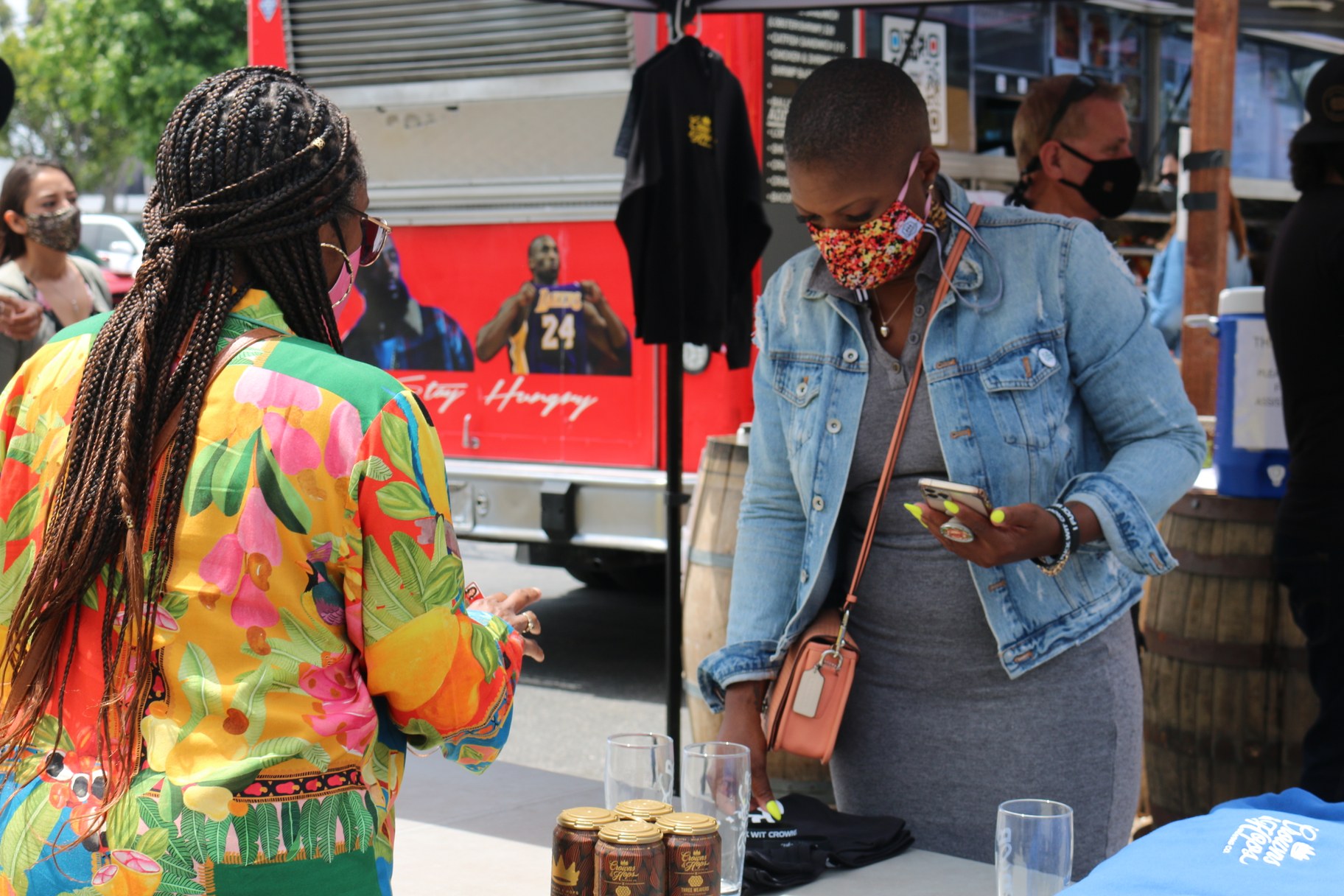 One of the people they engaged on social media is Aisha Dillard, a local of Inglewood, who was introduced to craft beer through the Crowns & Hops brand.

“They really have kind of captured how you make your audience feel special and feel seen,” says Dillard. “And that's what they've done for me.”

Currently, they have five signature styles of beer sold in over 800 stores across California, Nevada, and Oregon, with limited drops in Atlanta and New York. Their next dream is a brick-and-mortar pub called Crowns & Hops in Inglewood with close proximity to the SoFi stadium. Their community gathering spot will serve multiple purposes as a brewery while also being a place to learn how beer is made, and eventually a hub for creating videos, selling merch, and presenting art and music. They plan to have the brewery up and running in time for next year’s Super Bowl at the SoFi stadium.

“It is a good business strategy to have a business in the region where one of the newest stadiums on a planet is there that will not only have the Super Bowl, but we'll also have the Olympics and the World Cup within the same decade,” explains Hunter. “What we're doing is we're planning accordingly to ensure that as a Black-owned business, that we are as successful as we possibly can be.”

While they’re growing their business, Crowns & Hops want other new Black-owned craft beer companies to be successful too. Even though they’re raising money for their own venture, last year, they awarded grants totaling $100,000 to five young, Black-owned beer brands across the country. Dr. Jackson-Beckham, the beer business expert, thinks the market will grow.

“Black-owned craft beer brands, the vast majority of them are young, less than 3 years old,” says Jackson-Beckham. “And so presuming that that trend continues then, I would expect that we'll see more.”

In fact, the South Los Angeles Beverage company released its first beer label, the People’s Republic of South Central, last September with plans to invest proceeds back into the South Central LA neighborhood where the founders work.