“Pico Boulevard plays host to the unglamorous bits of Los Angeles,” wrote the late great food critic Jonathan Gold. “It is at the center of entry-level capitalism in central Los Angeles, and one of the most vital food streets in the world.” Photo by Mike Schlitt.

Pico Boulevard just may be the hardest working street in Los Angeles. It doesn’t have the myth or glamour of Sunset Boulevard, but as the late food critic Jonathan Gold once wrote, “It is at the center of entry-level capitalism in central Los Angeles, and one of the most vital food streets in the world.”

The life of Pio Pico 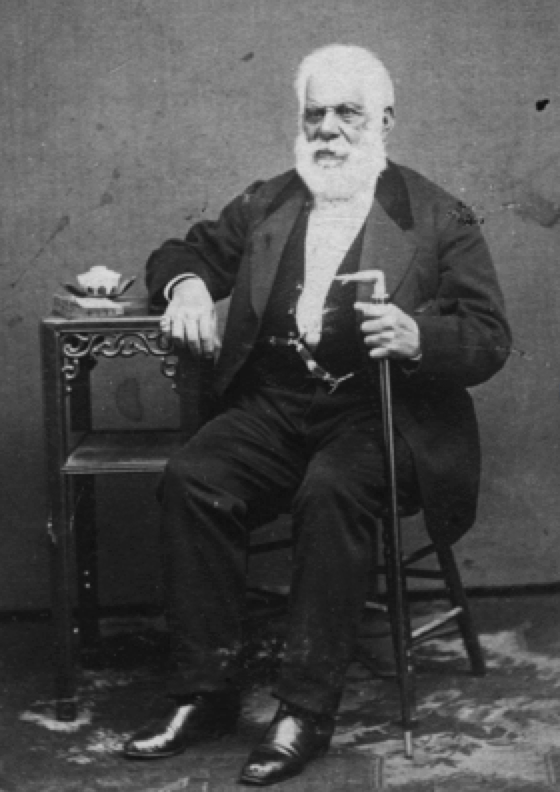 Pico Boulevard is named after Don Pio de Jesus Pico — a real estate baron turned penniless gambler, an indigenous African American Spanish Mexicano, and the last governor of California when it was ruled by Mexico. Pio Pico (1801-1894) lived under three flags in his lifetime — born a Spaniard, became a Mexican and died an American — all without ever leaving Southern California.

Pio Pico rose from humble beginnings to become one of the wealthiest and most powerful men in his time. He thrived as a public figure, politician,  landowner, merchant, soldier, ranchero and governor. He understood early in life that property was the conduit to economic and political power.

Sadly, near the end of his life, Pico lost everything. Bad business dealings, an inability to read or write English, natural disasters, a lifelong addiction to gambling, and an overly litigious nature all left his finances in ruins. “Rags to riches to rags,” says William Estrada of the LA County Natural History Museum. “He ended up living off charity from family and friends.”

“They were going to display him at the Chicago World's Exposition in 1893 as the last Don,” Estrada tells KCRW. “He was going to be placed as a living exhibit next to Chumash baskets, California oranges, everything that evokes the reality and mythology and romance of Southern California.”

The World’s Fair wanted to celebrate California exoticism by displaying Pio Pico like a circus animal. The pay was good — enough to live comfortably for the rest of his life. So what did Pio Pico say? He published his reply in the LA Times: “If those gringos imagine for a moment that they can show me in a side tent at two bits a head, they are very much mistaken.”

Estrada says, "He didn’t just say 'no.' He said 'hell no.' His dignity and his pride remained intact. And that’s all we can take with us in the end.”

KCRW spoke with small business owners on Pico Boulevard and found a remarkable parallel between the life and values of Pio Pico and the spirit on the street today. Here’s what a few of them had to say. 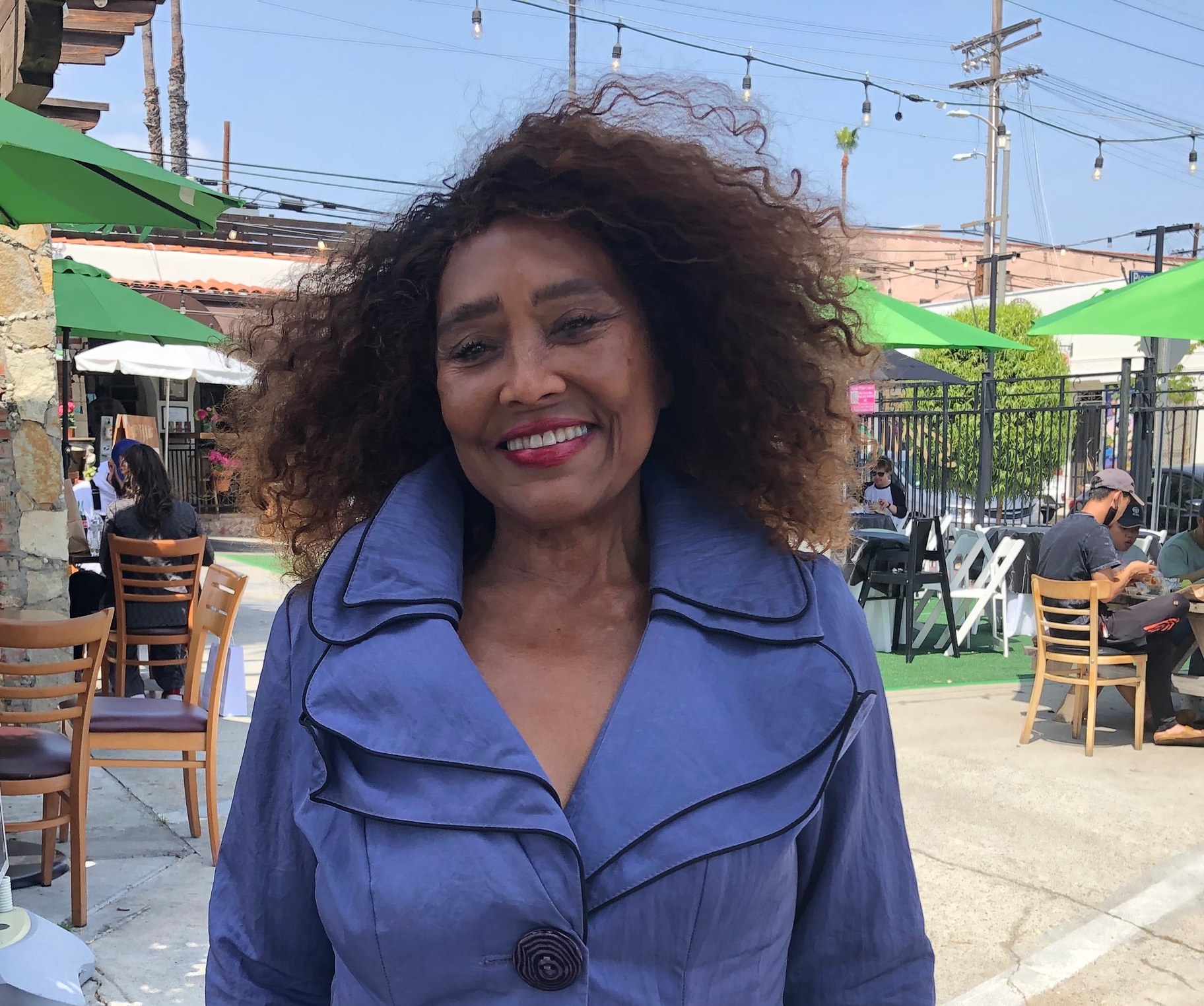 “I believe every street carries a vibration. There’s a spirit on Pico that brings life to your soul,” says Barbara Sky Burrell, who started Sky’s Gourmet Tacos more than 28 years ago. Photo by Mike Schlitt

“I believe every street carries a vibration. There’s a spirit on Pico that brings life to your soul.”

“I started my business over 28 years ago. I started with a wood stove and probably $2,000. And I started on Pico. It was right around the time of the civil unrest. I kept my doors open, didn’t leave my business, I stayed there until I couldn’t stay any longer. I wasn’t frightened, I found how people came together on Pico, it was a sense of community. Somehow, something had changed during that time. It was a shift of caring. After 28 years, I can tell you, this community cares, these people care.”

“The pandemic will be over, but the economics of that pandemic will remain for some time. Most of my people have been with me, like, 20 years. We’re a family. I have not laid off a single person during this pandemic. Oh, I’ve taken a cut. But so what? Are we going to sustain? That’s my concern. I’m a day-by-day person. I’m an optimist. And I’ve seen a lot of crazy things. I can’t give you a guarantee. I wish I could.” 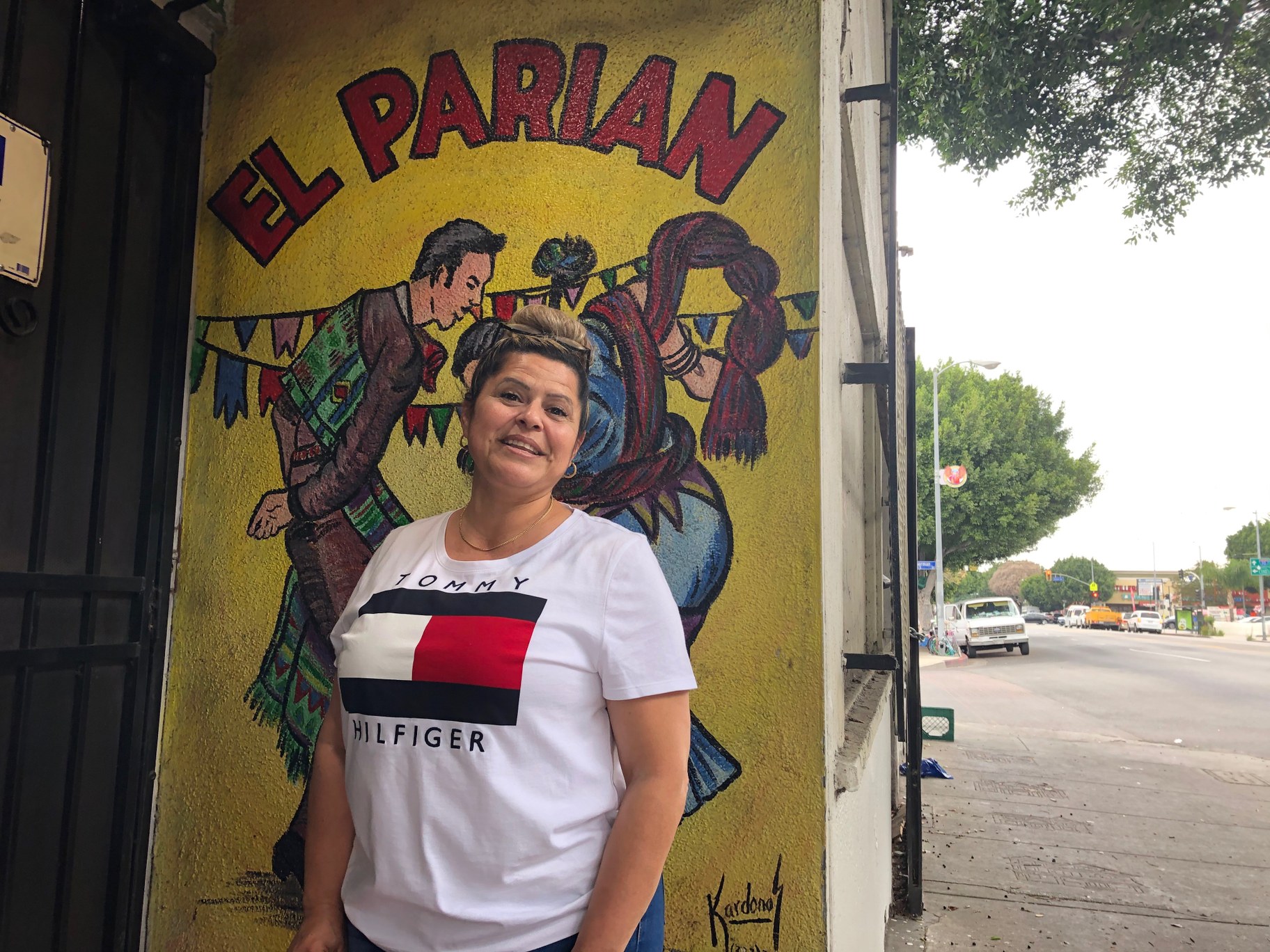 “This restaurant was founded by my grandfather in the early 70s. I grew up in the backyard playing El Parian, wishing I was old enough so I can come and work as a waitress. I’ve been here every weekend since the age of 11.”

“We’re hoping that we can overcome the pandemic.  And we also have to care for other families. It's heartbreaking.  My grandfather passed away and we didn’t close, my father passed away and it didn’t close. If they sacrificed, I think my will should be stronger than theirs. Because if they were willing to do it for us, I should be willing to do it for them. “ 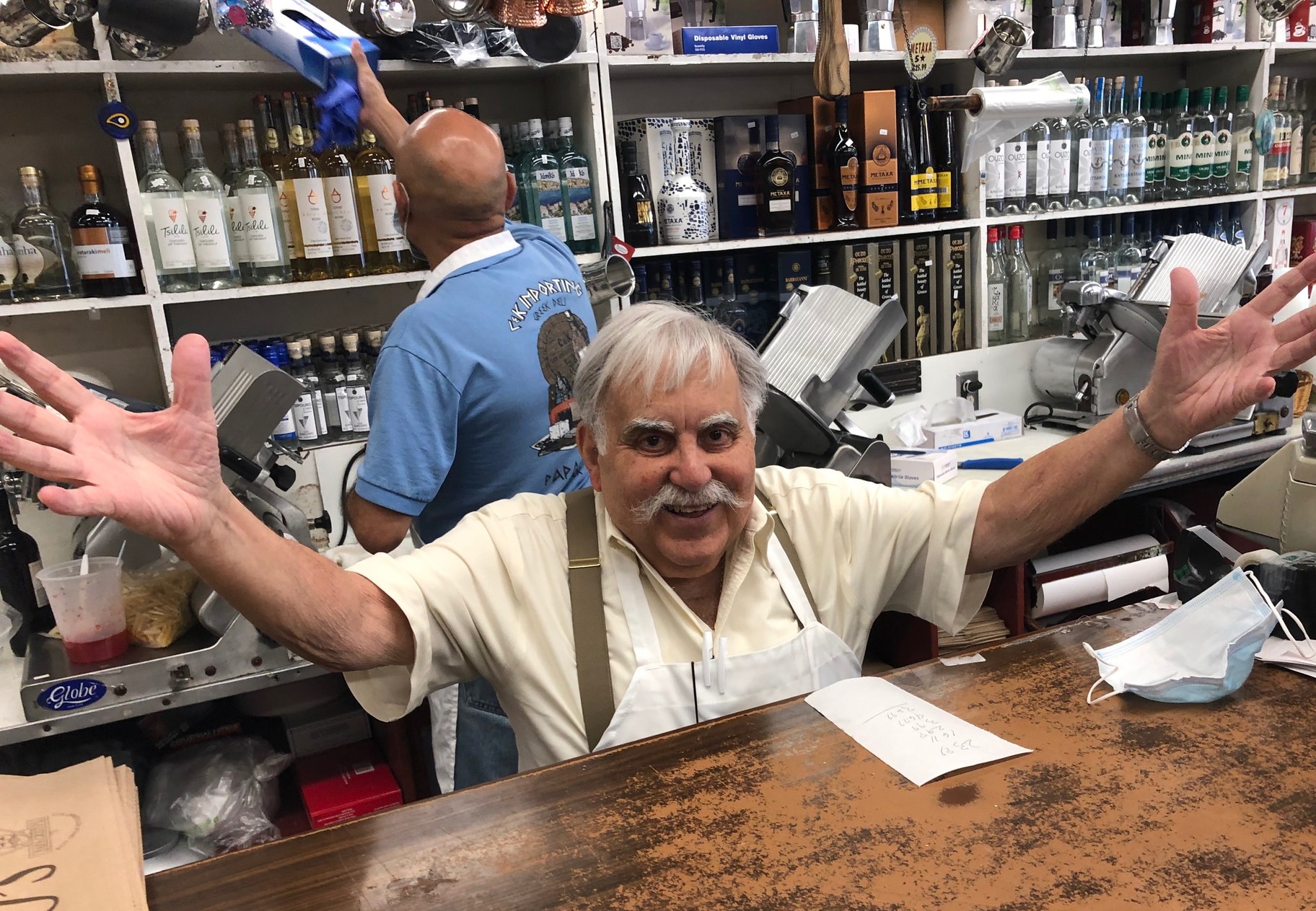 “What I love about Pico: We don’t have major corporations here. No McDonald’s or Starbucks here. It’s family-run operations,” says Chrys Chys. Photo by Mike Schlitt.

“We’ve had the same address, same telephone number and same landlord since 1948.  It’s been like a fairy tale. And what I love about Pico: We don’t have major corporations here. No McDonald’s or Starbucks here. It’s family-run operations. When you walk into a store, you’re going to see the owner or someone from his family. At Papa Cristo’s, we are one big family working together — on both sides of the aisle.” 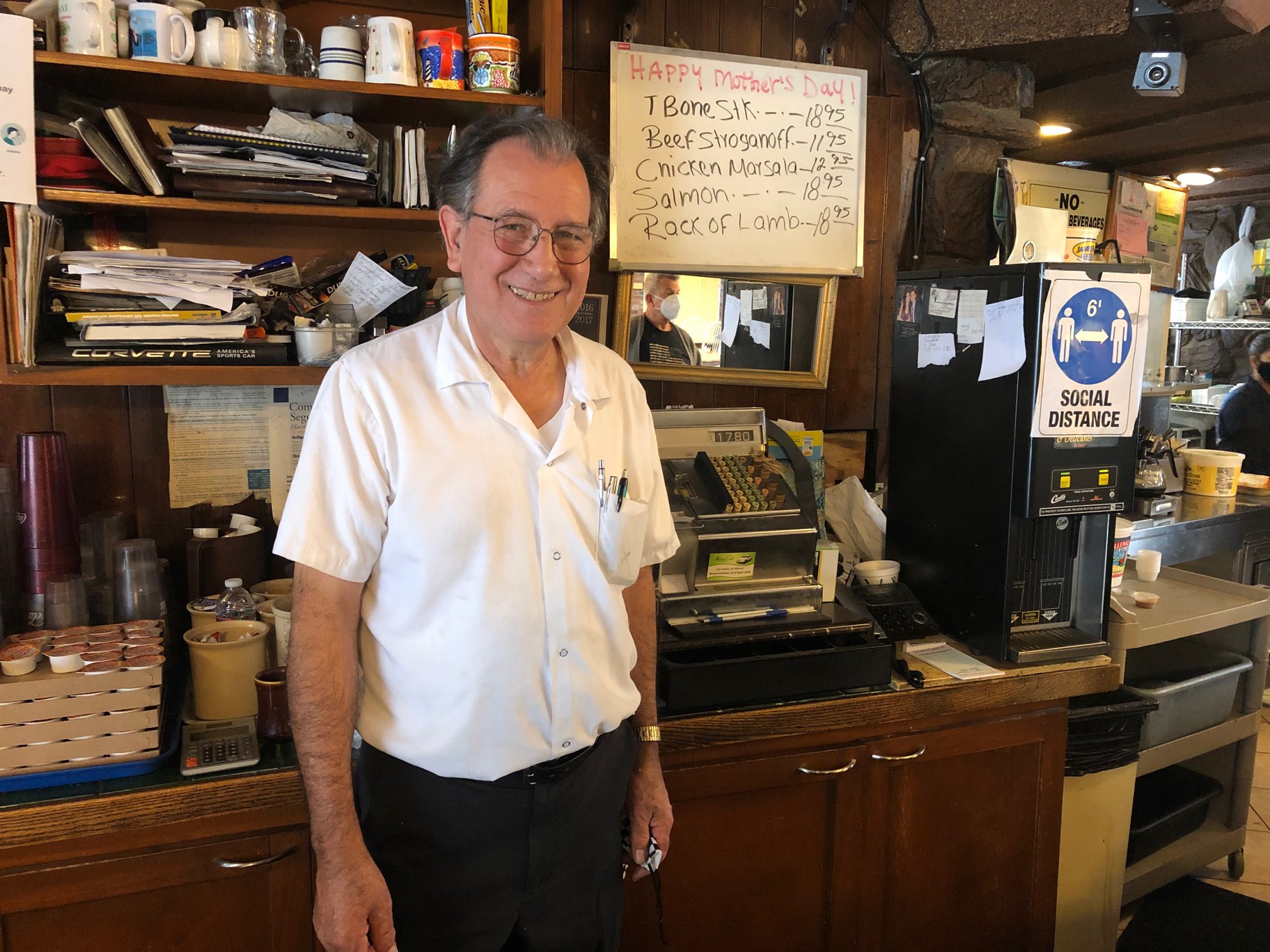 “I was also working at Teddy’s Café back then. I told myself: If I start a business, I have to own the property. … I see many businesses, they build up good, but then the landlord starts to raise the rent. Or even they sell the property and let you go. So one day the owner comes to me and he says, “You know what, Ted? You ask me many times if I sell you the property. So I will!’” 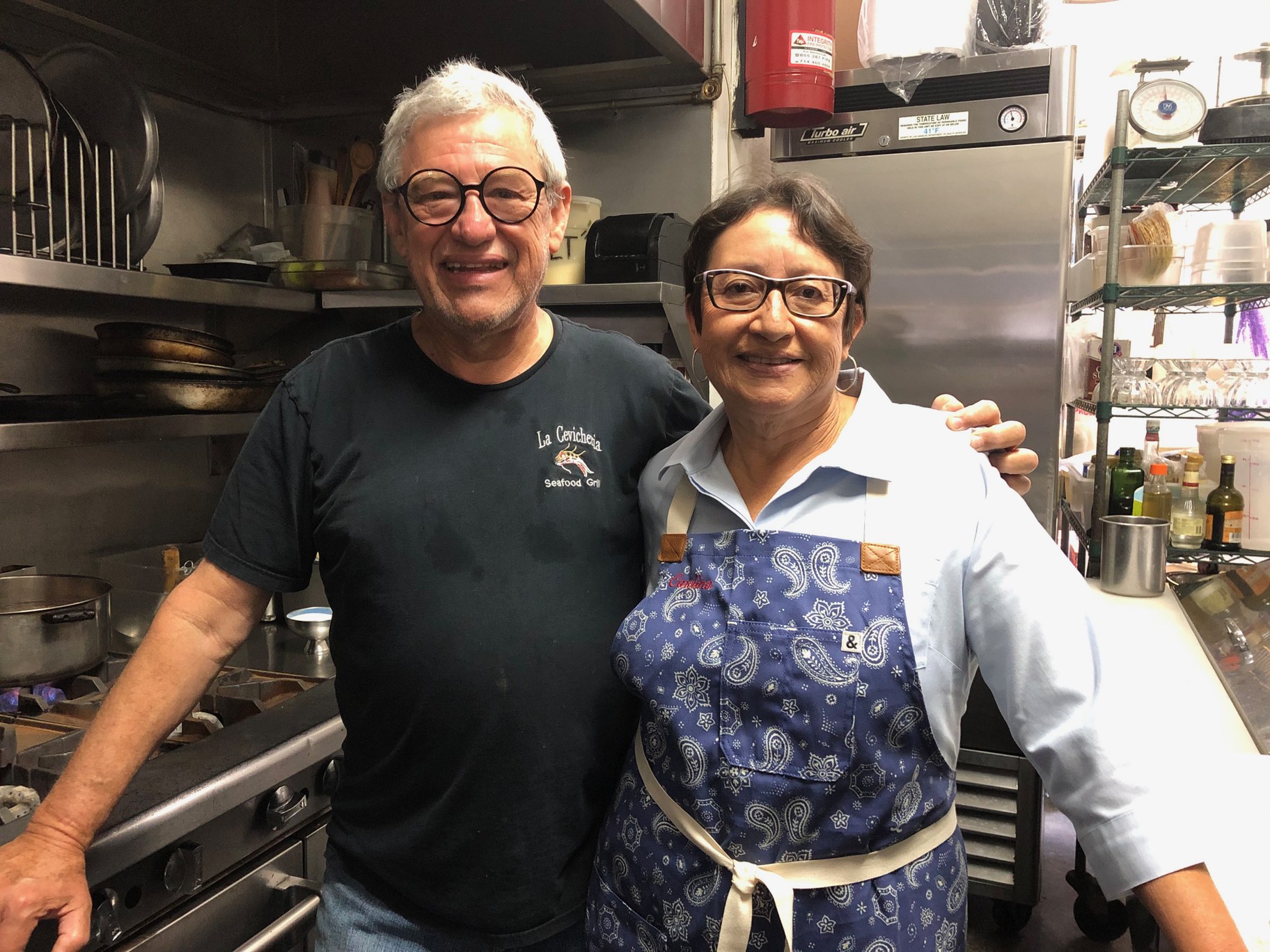 Julio and Carolina Orellana opened La Cevicheria in 2003, and they say they still have the same clientele. Photo by Mike Schlitt.

Julio: “I’m her husband, her assistant, and whatever else you want to call me. We’re called La Cevicheria — [it means] seafood grill. In the menu, she says Ceviche is an aphrodisiac. We opened in 2003, we still have the same clientele. We’ve done all right in the pandemic, our restaurant is small. So it’s easier to manage.”

Carolina: “We have people who want to help expand our business, but who knows?”

Julio: “Probably in the future, we’d like to sell franchises of La Cevicheria with the same concept and the same service and the same people, you know. So we can relax. I was telling Carolina, ‘Let’s make some money without breaking our backs. Let’s go somewhere else and live anywhere.’ You know what she says? ‘I don’t want to leave my kids.’” 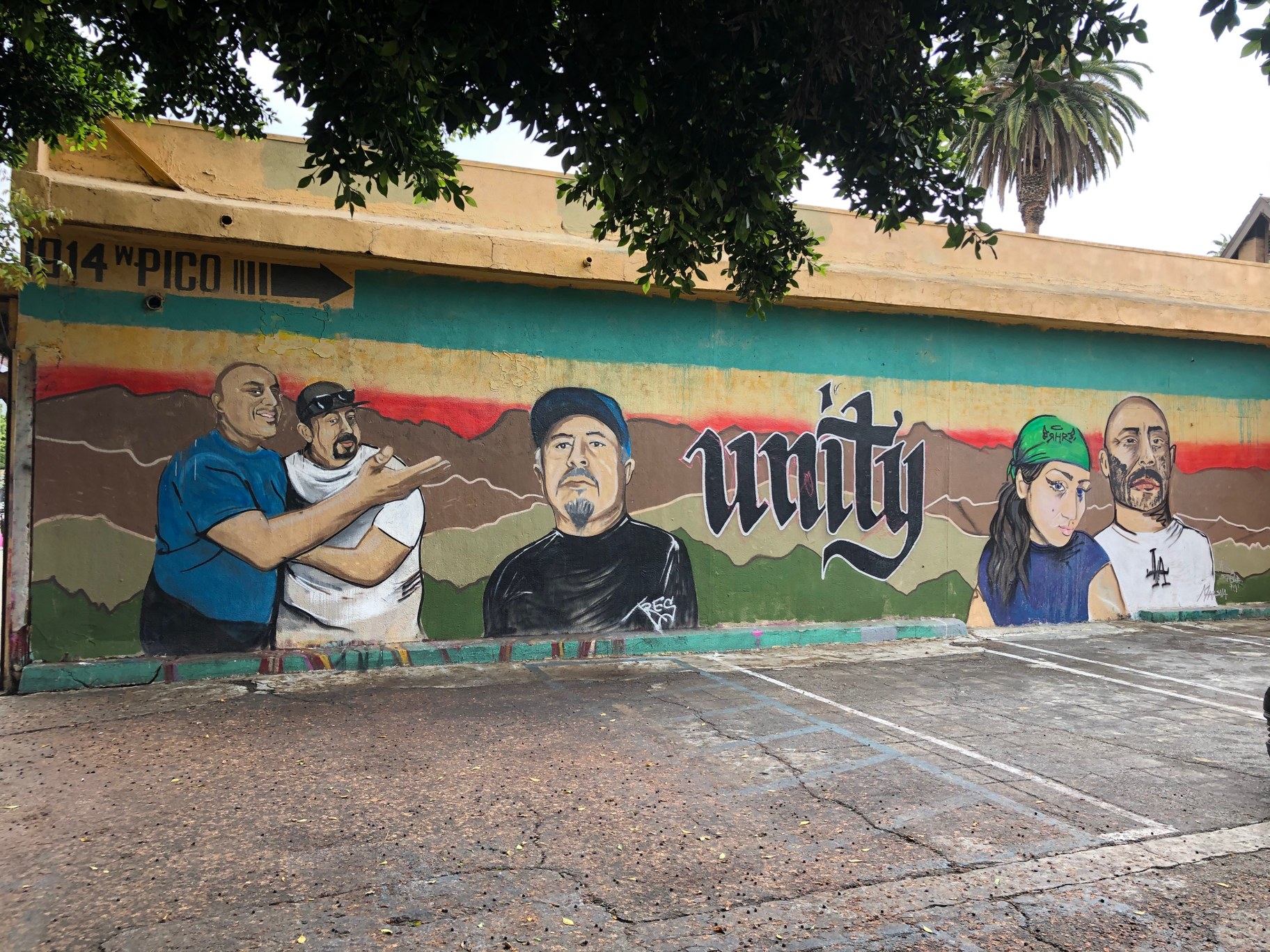 A mural is seen on Pico Boulevard, near the intersection of Pico and Alvarado Terrace. Photo by Mike Schlitt.

Pico Boulevard just may be the hardest working street in Los Angeles.