LAPD wants more volunteers, but not everyone's on board Volunteers in the LAPD’s Devonshire Division receive a briefing from Sergeant Jose Torres (top right). All photos by Carla Green.

Volunteers are the "eyes and ears" of the LAPD, as its officers like to say. One of the biggest volunteer squads is in the San Fernando Valley's Devonshire Division, which has about 200 volunteers. Altogether, the LAPD wants to recruit 5,000 volunteers across the city.

Volunteers get trained to do community watch, front desk duty, bike duty, traffic control, and other shifts. Prospective candidates must go through a background check and trial run, and can be disqualified for a number of reasons, including certain criminal convictions. 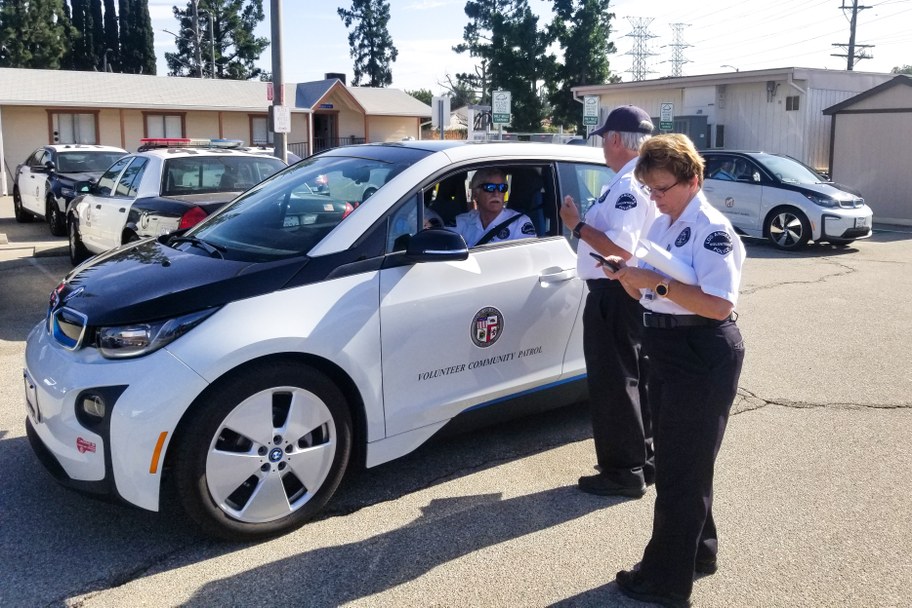 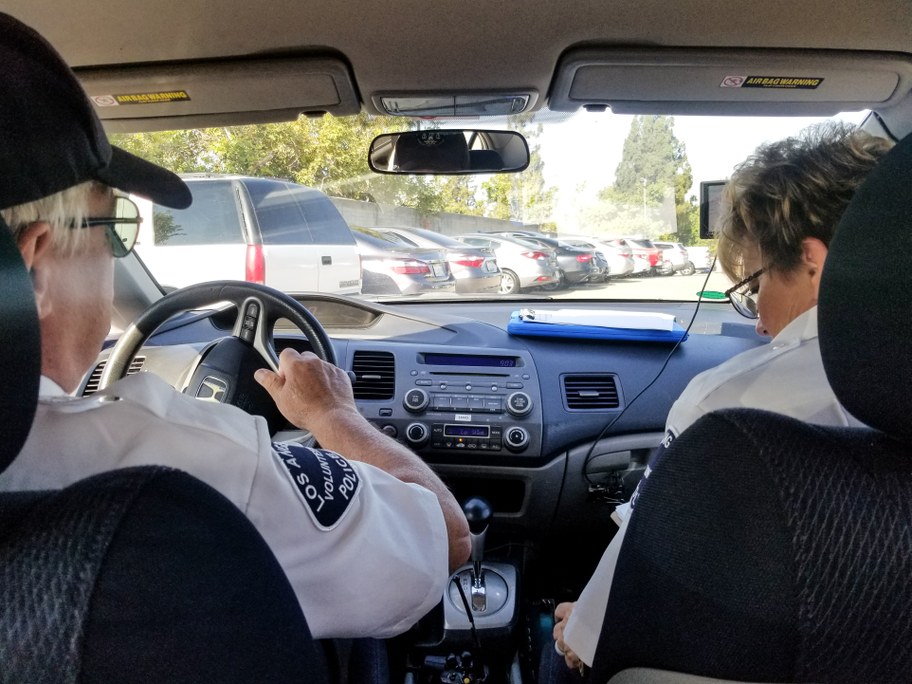 The philosophy behind the LAPD’s volunteer program is similar to that of neighborhood watch programs: if you see something, say something.

But that philosophy can be controversial, especially among communities of color that have been targeted and racially profiled by the police. And neighborhood watch programs themselves have sometimes led to violence. It was a neighborhood watchman, George Zimmerman, who famously shot and killed 17-year-old Trayvon Martin in 2012.

Do officers worry about another George Zimmerman? LAPD Sergeant Jose Torres, who’s in charge of the volunteers at the Devonshire Division, said that volunteers are not allowed to carry guns, and that the department has tried "having a more open dialogue with our community."

“We do have some concerns that come up every now and then, but I think that's always an opportunity to learn,” he said.

LAPD volunteers haven’t been involved in any shootings, but that doesn't mean they're immune to controversy. Last month, activists uncovered two closed Facebook groups where certain members called for violence against homeless people.

Both groups were moderated by a (now former) LAPD volunteer, and members included LAPD officers and volunteers (although neither seem to have been among those who made the violent comments).

An LAPD spokesperson said that when the department learned about the groups, they "released the volunteer and ordered the officers to leave the group."

“We have no tolerance for hate speech, nor will we allow any employee or volunteer to encourage criminal or violent behavior,” the LAPD said in a statement. “Neighborhood watch and volunteerism are critical components in our effort to drive down crime and create safe healthy neighborhoods … We continue working to grow community participation but, we are well aware of how important it is that we ensure every one of our citizen patrol volunteers is thoroughly vetted through a background process and Department interview.”

How do residents feel about LAPD volunteers?

KCRW spoke with several residents in Pacoima, a community about five miles away from the Devonshire Division, about the LAPD’s volunteer program and their own relationship with police.

Palmdale resident Vincent, 62, who didn’t want to share his last name, said he’s seen and experienced a lot of racial profiling by police.

He said he was aware of “a lot of profiling, a lot of racial issues. It seemed like [the police] were just trying to put felonies on most of the people. To lock them up. And that prevents you from moving forward in life, getting a job, and getting equality. Being able to be an equal with everyone else.”

However, Vincent also said he would volunteer with the cops – to try to make policing better.

“I think by helping them, or working with them, you can educate them. [Because] you’re supposed to get out in the community and meet the people – without always doing it with a stick, or with a gun, roughing someone up, handcuffing them, and taking them to jail for small things," he said.

Hasan, 18, who also didn’t want to share his last name, said a cop pulled a gun on him last year, when he got pulled over and had forgotten his license. "I felt like wow. Felt discriminated, really," he said.

While some see collaborating with the police as the best way to keep their community safe, others, like Vincent and Hasan, don’t trust the LAPD. In response, independent organizations have emerged with their own programs to help people deal with crime outside of the traditional system.

For example, the Youth Justice Coalition in South LA, which offers a program called Community Alternatives to 911 (CAT 911). Based on the idea that calling the police can lead to unnecessary violence, the program teaches people how to handle crime without calling the cops.

Still, Anthony Robles, an organizer with the Youth Justice Coalition, acknowledges that sometimes you might need to call the police.

LAPD wants more volunteers on its force, but it's complicated

LAPD wants more volunteers, but not everyone's on board

Volunteers are the "eyes and ears" of the LAPD, as its officers like to say. One of the biggest volunteer squads is in the San Fernando Valley's Devonshire Division, which...

USC professor: 'Do we need police at all?'

Why is the LAPD having trouble finding black and brown volunteers? “It doesn’t seem particularly insightful for us to want to be a part of that system.

There aren't many parks and recreational areas in Garden Grove and Santa Ana. Public land advocates want to change that by turning the 100-acre Willowick Golf Course...