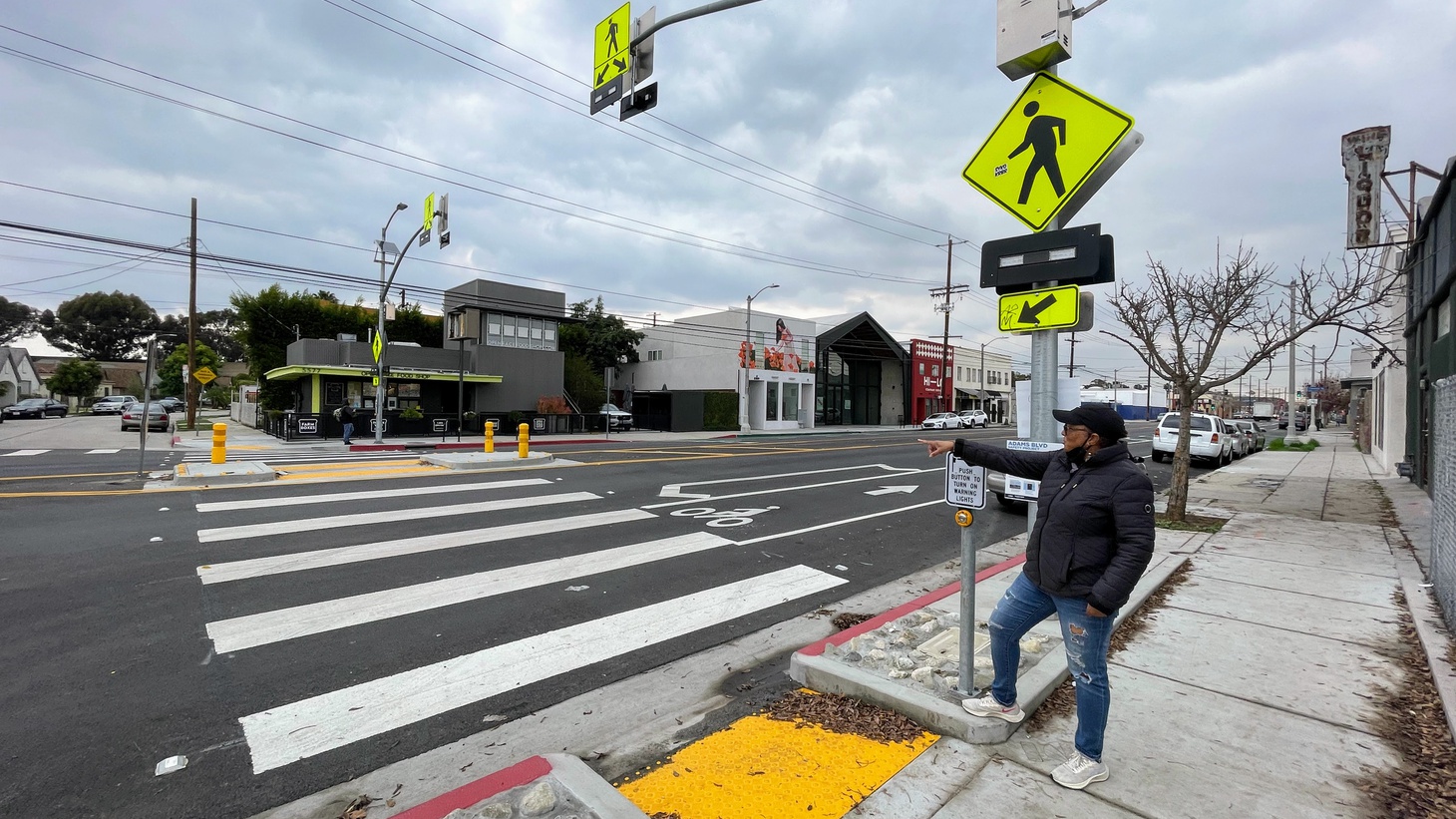 Yolanda Davis-Overstreet, a community organizer and mobility justice advocate, points to a crosswalk on West Adams Boulevard that she helped bring to the neighborhood through the City of LA’s Vision Zero. Photo by Megan Jamerson.

As community organizer Yolanda Davis-Overstreet shows off the new crosswalks she helped bring to her West Adams neighborhood, she says she feels uplifted: “This is a safety change that has been made for the very people that live here and have been affected by traffic violence, and a disenfranchised community that hasn't been improved for decades.”

But street safety improvements are not the only change happening in this working and middle class neighborhood. Amenities familiar to locals — a Mexican restaurant here, a laundromat there — are disappearing as new businesses — a $200 per night hotel, a French bakery — move in. Sweetgreen and the fashion company Signal Brands, which manages products for Nine West and Guess, are planning to move their headquarters here. 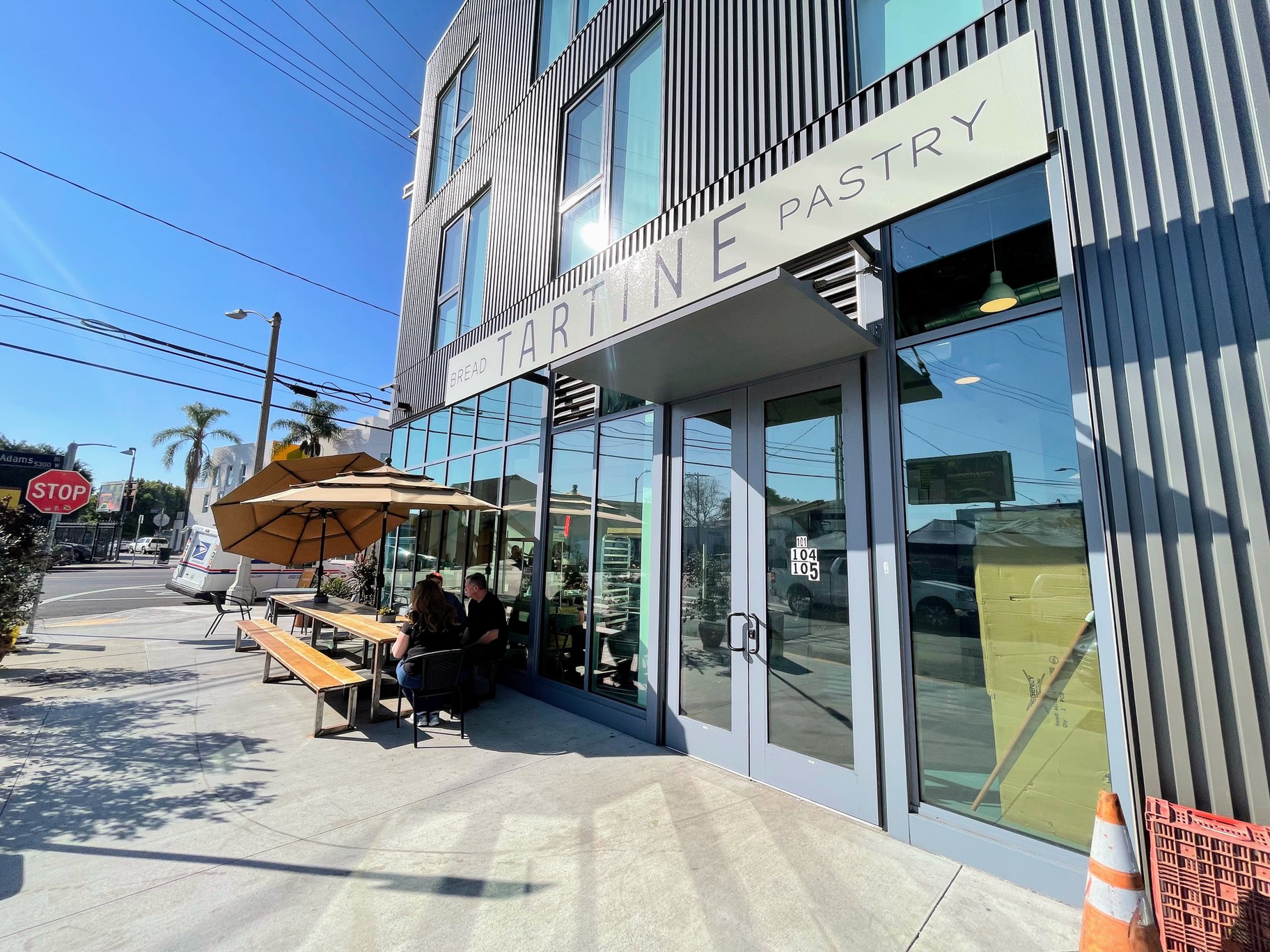 The barkery Tartine opened in West Adams in November 2021. Photo by Megan Jamerson.

Consequently, neighborhood improvements that benefit everyone, even crosswalks, are sometimes regarded by old-timers with suspicion about who these changes are meant to serve.

The City of Los Angeles targeted these two miles along West Adams Boulevard, south of the 10 freeway, for safety upgrades in 2017 after a shocking number of hit and runs killed Black and Brown elders. As part of Vision Zero, the city brought the street down to two lanes of traffic and added a bike lane and more crosswalks.

But long-time West Adams resident Steven Meeks says a skeptical neighbor told him she believes the crosswalks are all part of gentrification. “People have been saying that about the whole area,” says Meeks. “They're wondering, ‘This is for us? This is not for us.’”

The meaning of the neighborhood name “West Adams” now differs for locals versus investors, says Darryl Wash, CEO of Band of Vices, a Black-owned art gallery on West Adams Boulevard. His family goes back 70 years in the area.

He says the people who grew up here see West Adams as “the rich legacy and the history and depth of culture that existed, and Sugar Hill.”

Sugar Hill is a nearby middle class Black neighborhood, much of which was bulldozed to make way for the 10 freeway. Today displacement is happening in the area again. The latest Census data shows West Adams’ Black and Latino populations have dropped about 7 and 3% over the last decade while Asian and white populations have increased by 2 and 5%.

Meanwhile, Wash says investors and people moving in think: ‘‘Hey, this is a hot new area to put some money into.” 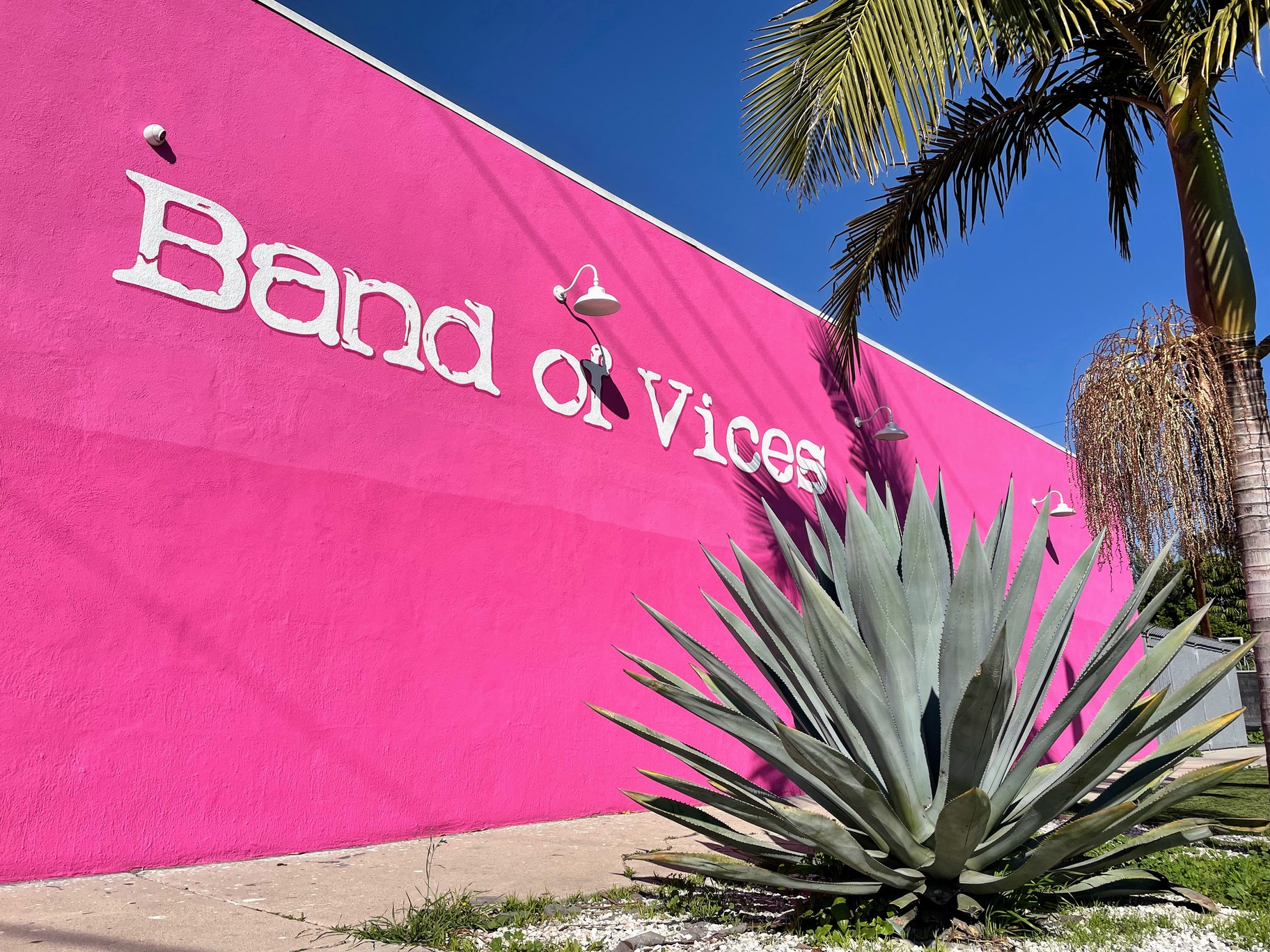 The Band of Vices art gallery on West Adams Boulevard is owned and operated by locals who grew up in the area. Photo by Megan Jamerson.

One common driver of displacement is rising housing costs. Over the last 12 months, rent for the average for one-bedroom apartment in West Adams jumped 46% to $2,500 per month, according to the rental website Zumper.

But even local homeowners, whose equity has spiraled upwards over the past 10 years, can feel threatened by the changes.

West Adams resident Laura Clines, a retired LAUSD administrator, says she’s been dealing with incessant phone calls, texts, and offer letters to buy the childhood home she shares with her 95-year-old mother. Her parents bought the house in 1962 for around $25,000. Now it’s easily worth over $800,000. When her mom dies, the plan is to sell and split the profits of the three-bedroom home with her two siblings. 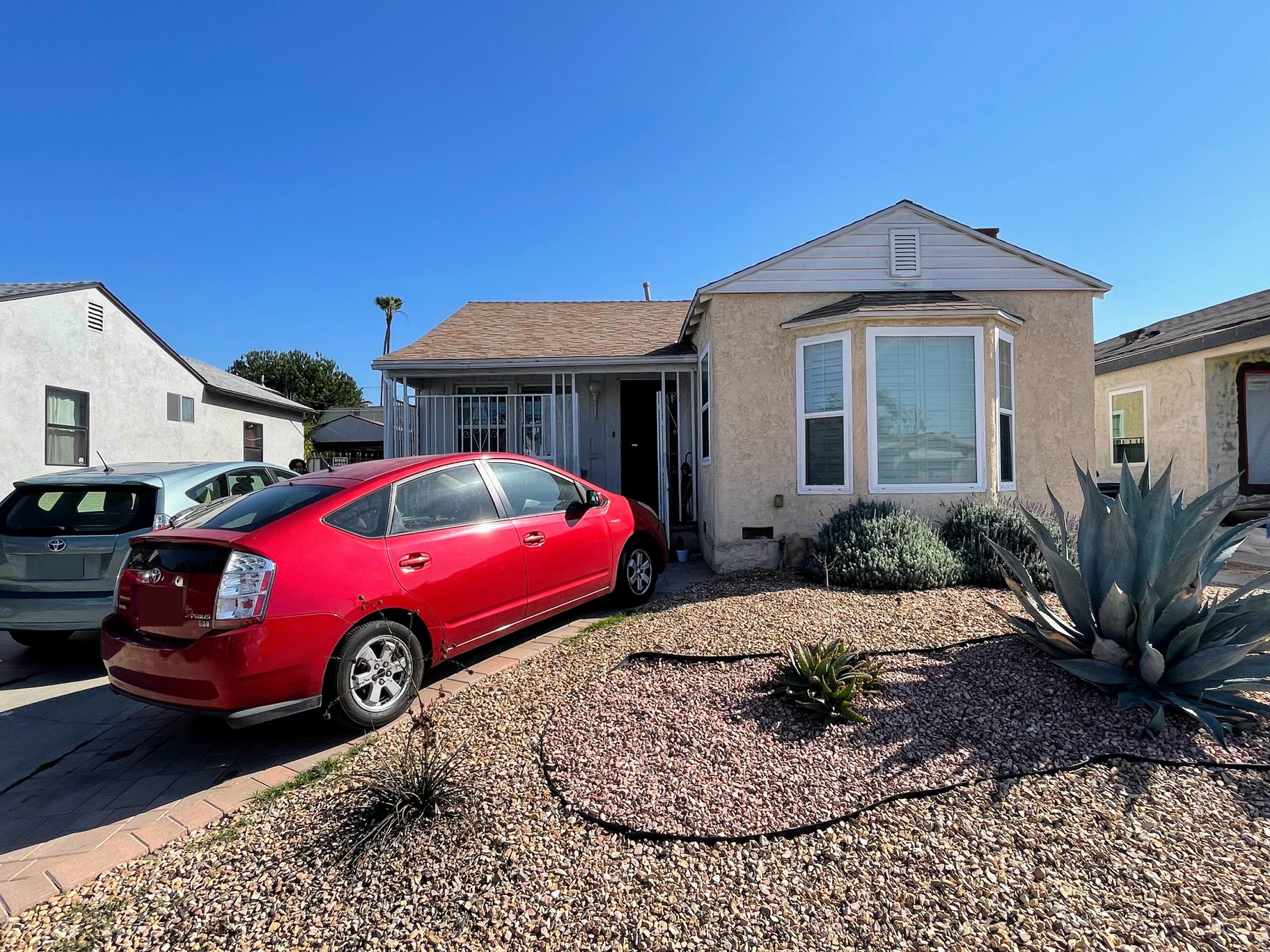 Laura Clines and her mother share this three-bedroom home. Remodeled homes this size often sell for over $1 million in the current market. Photo by Megan Jamerson.

Clines planned to use the money to stay in West Adams, but the reality of that dream is slipping away as she watches the neighborhood become unaffordable. “I think when the time comes, I'm gonna have to leave Los Angeles because it's just too expensive.”

West Adams homes are still affordable for some Angelenos, like Jennfier Li and her partner, who moved here three years ago from West LA. They were renters and found a remodeled home in West Adams that cost far less than similar houses in their old neighborhood. Li, a financial planner, says the affordability, the central location, and neighborhood feel sold her on the area.

Li notices the changes like the new restaurants and apartment buildings. Those feel like gentrification to her. The other improvements like the new crosswalks and bike lane don’t.

Davis-Overstreet, who played a large role in bringing these safety improvements to West Adams, agrees that those are two different efforts. “It was a community member effort, doing what I did. And then there's the business improvement effort that's come as a result of the gentrification that's happening.” 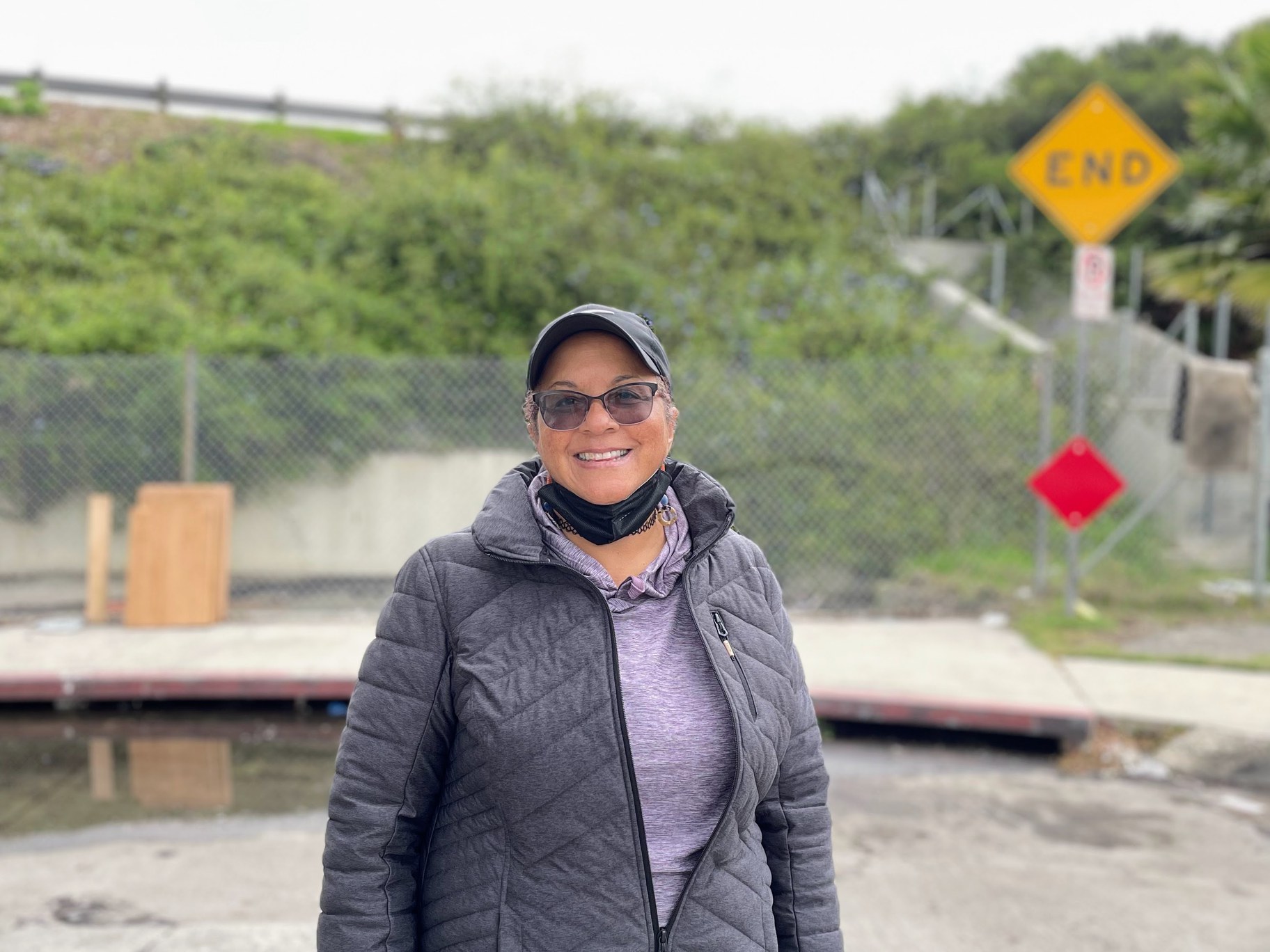 Yolanda Davis-Overstreet stands on the street where her parents first lived in West Adams. They had to move when the 10 freeway, seen behind her, split the street in two. Photo by Megan Jamerson.

Davis-Overstreet has complicated feelings about the changes herself. On the one hand, who doesn’t want a new bakery nearby? Yet she describes a “perplexing reality” during her last visit to Tartine.

“It's like a part of me has this rage in it to wonder: Where am I? … I didn't see me. I didn't see my community,” she says. She saw only white patrons at the bakery, and longed for another Black resident to be there with her, so  she called a friend.

Davis-Overstreet says she’s not trying to “jam white folks.” She adds, “But I don't think they understand what it feels like to have a community that has been disenfranchised, and we made it work. Now it's like, who we are and what we are don't matter anymore because it's changing.”

Meeks, a community organizer with the neighborhood’s Good Earth Community Garden, agrees that people are starting to feel more than just invisible. “The people in this neighborhood. I don’t care what color you are. … If you live here, you're expendable.” 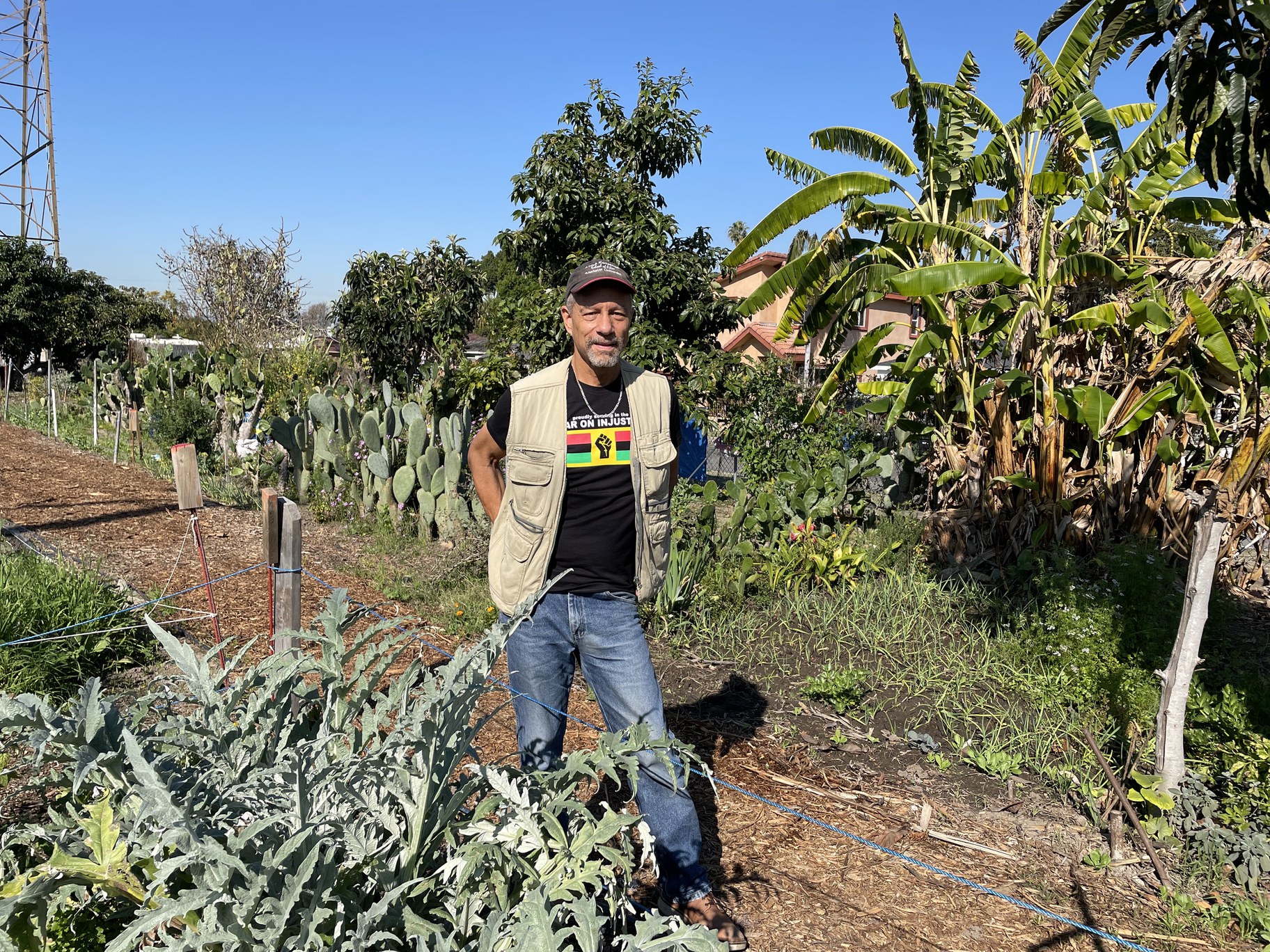 Back on West Adams Boulevard, Davis-Overstreet walks by for-lease signs in renovated storefronts as she says she hopes more of the changes to come in West Adams are the kind that truly benefit everyone. The kind that makes it easier and more comfortable for the long-time community to thrive.

As she reaches another new crosswalk, she stops. “At least we can stand up and hold our hand up and say, ‘I know that this activity took place as a result of my voice, as a person that lives in the community,” she says.

Does gentrification come with safer roads in West Adams?

As LA makes safety improvements during rapid neighborhood development south of the 10 freeway, locals ask which changes really benefit them.