A private bar where you can drink, hug, and ditch masks? Welcome to Risky Business in North Hollywood Before COVID-19, you might’ve known Risky Business as The Other Door —  a largely unassuming cocktail-focused neighborhood bar in North Hollywood. But today, 14 months into the pandemic, the venue has transformed into a private club for fully vaccinated people. Co-owners Ari Schindler and Jonathan Katz know the venture is a risk, and they chose the new name to be transparent about it.

“It's not that we accidentally said the quiet part out loud. This is about people who want to manage their risk,” Schindler tells KCRW. “They know nothing is 100% safe, both in COVID and out. Life is challenging. Life has risks. All we've done here is we've created an environment where you have a different risk profile than other places.”

Want to be part of Risky Business? You need to show a card proving you’re fully vaccinated against COVID, and pay the $10 one-time membership fee. You can then sit at the bar, meet and rub elbows with strangers, eat and drink without masks or social distancing. You’ll also receive an engraved membership card made out of black anodized aluminum. 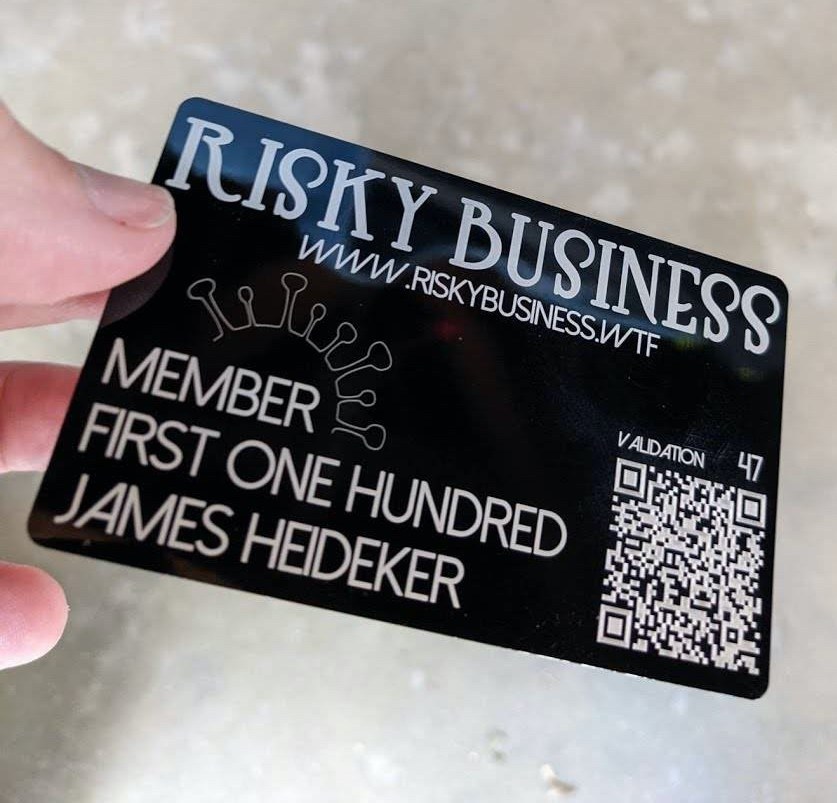 The bar held its soft opening the weekend of May 7 and welcomed nearly 40 newly minted members. At least 1,000 memberships have been sold so far, says Schindler.

“It feels good. It feels free. Unrestricted. It feels pre-COVID, almost like a different time,” says Crisanta Melendez, who visited the bar last Saturday after reading about it online. “Here we have this very relaxed [space]. It almost feels wrong, but in a good way.”

She adds, “The membership fee is worth the peace of mind — coming here knowing that there's like-minded people who have done everything that they're supposed to do in the past year. They've socially distanced. They've worn the masks. They've gotten the tests.”

For Andy Kantos, the chance to meet new people felt like a return to normalcy.

“This place is fantastic — the vibe, the energy, the people around. .... It feels so good to be back in life. We're all walking around without our masks on, because every single one of us are healthy and vaccinated.” 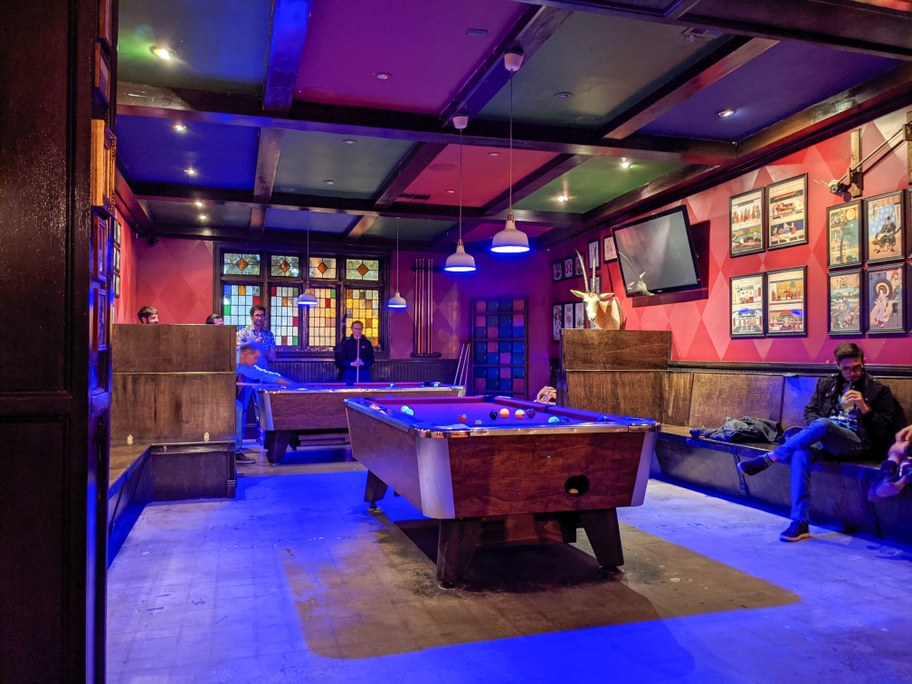 Club members gather around pool tables in the back of the bar. Photo by Jonathan Katz.

Saturday was one of his first nights back out on the town since last March. He’s been as careful as possible in the 14 months since. He has type one diabetes, and has coworkers and friends with pre-existing conditions. Kantos says he’s missed being close to others.

“The feeling I had when I shook the first person's hand, being able to touch somebody again, just palm the palm, just that little bit of time that I got to share with somebody in that simple way,” he says. “Remember the joy you felt when you were a kid? Maybe it was your birthday or maybe it was like when you spent time with a friend? That's what it feels like here today. We are all friends together.”

The North Hollywood watering hole isn’t the only organization requiring full vaccination for entry. Inglewood’s SoFi Stadium recently hosted tens of thousands of fully vaccinated audience members at a star-studded charity concert. Dodger Stadium has a section that doesn’t require masks or social distancing for fully inoculated people. This summer, the Hollywood Bowl plans to do the same.

There is one caveat to joining the private club. Prospective members must sign an agreement stipulating that they understand the bar’s health risks, and understand that if someone lies about their vaccination status, they may be subject to legal action or a $10,000 fine.

KCRW checked the viability of legal threats with Thomas A. Lenz, a partner at the Atkinson, Andelson, Loya, Ruud & Romo law firm in Pasadena. He says the threats — and even the bar itself — operates in a legal gray area.

“We're in the middle of a developing situation. And I think a lot of business people are trying to adapt. They may be changing their business model. … It's not at all unusual for the government to take a different view of the situations,” he says. “So I wouldn't be surprised to see the county or perhaps some other regulator take interest in this situation.”

So is this legal? Perhaps.

But Schindler argues that there is no explicit rule banning private clubs for fully vaccinated people amid the pandemic.

When this bar first announced that it’d reopen as a private club, it received mixed reactions. Some were happy while others deemed the business owners irresponsible or discriminatory.

“It's funny … the number of times we've been called Nazis, just because we're demanding people's paperwork. But at the same time, we do have that almost libertarian perspective of this is the risk profile that we can provide. You make decisions that are comfortable to you,” Katz says.

Schindler says others were turned off by the exclusive nature of a private club.

“Everybody in here is a normal person, and there's nobody landing with their private jet or their drone copter. It's just funny that [when] people hear that it's private, and see that we have very well designed membership cards that Jon engraves, [they] think that it must be some kind of elitist thing, when it's exactly the opposite.”

Katz wants to make it clear that they’re not forcing anyone to step outside of their comfort zone.

“There's really no shaming either way though. We make hand sanitizer available. If somebody wants to wear a mask, there's no shaming. It's what makes people comfortable. We're not trying to be the jerks either way here.”

A year of learning to pivot

Pre-pandemic, The Other Door was always swimming with bodies. Patrons eagerly showed up for live music performances, stand-up comedy shows, or the occasional burlesque show.

Schindler says they saw the pandemic writing on the wall in December 2019. That was when senior patrons stopped coming. When March hit, business came to a complete stop.

“You had the whole venue that days before had been thriving with 100-plus people and a dozen staff members,'' Schindler says. “Then you have one person, and I can't let anybody else in the building at all at that stage. Even to get deliveries is to get them dropped outside and let them cook in the sun for a few hours.”

Schindler says they immediately had to do something about the excess booze piling up, and find a way to pay the bills.

“It only took about a day for us to get into the mode of realizing that we both need to liquidate some of the stock to find any way to function as an entity,” Schindler says. “Bars operate on net 30. So generally speaking, you purchase a bunch of product, it gets delivered, you sell it, and then you pay for it later. … For most bars, when they get shut down, the system collapses hard. Because suddenly all the bills come due, and you haven't been able to sell the stuff.”

Then Schindler started packaging bundles of household essentials to sell. They included items that people had trouble finding in stores at the beginning of the pandemic.

The model later pivoted from essentials to weekly curated subscription boxes of liquor and snacks.

Eventually, the idea for the vax-only space came from frontline worker friends who saw the worst of the pandemic.

“It's a horror show for them in the hospital with no rooms available and people on ventilators. They came to us and they basically said, ‘When is there going to be someplace we can to blow off steam?’”

What happens when the pandemic is history?

Schindler recognizes that eventually, the club might be able to drop its vaccinated-only business model. 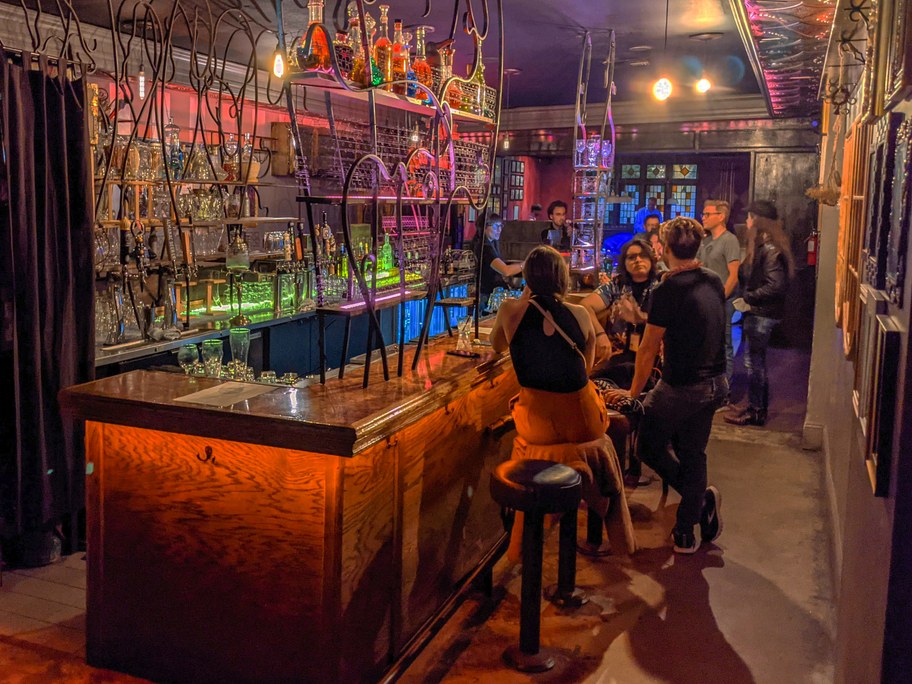 Patrons mingle at the bar while waiting for drinks. Photo by Jonathan Katz.

What are the business partners hoping for by opening a vaccinated-only club? A return to normalcy.

He adds, “That's really all it comes down to. We've got a room where there's a group of people who are living the way we used to live.”

A private bar where you can drink, hug, and ditch masks? Welcome to Risky Business in North Hollywood

Risky Business is a private club in North Hollywood for fully vaccinated people, where people can drink and mingle without wearing masks or social distancing.

Vaccine mandate for employees? Some companies already have one

Silverado, a long-term care facility chain with the majority of its locations in Southern California, started requiring COVID vaccines for employees starting March 1.

Scammers are selling fake vaccine cards. How authorities are responding

Anti-vaccine groups are spreading information online about where to buy forged cards and instructions on how to print your own, says reporter Sheera Frenkel.