Mona Holmes in 1992. “You might be white, but this is your city and country too. Racism and police violence affects everyone, whether you believe it or not,” she says. Photo courtesy of Mona Holmes.

Greater LA contributor Mona Holmes shares what it was like for her to grow up Black in Los Angeles:

When tens of thousands of people took to the streets of Hollywood, Downtown, points in between and beyond last weekend to protest police brutality and the killing of Black people, I stayed home. I watched the crowds from Twitter and news networks. And I listened to coverage on KCRW.

I stayed home because I am tired. Exhausted, actually

I knew these were unprecedented times, so I kept a journal.

I can’t bring myself to watch the video where two white men ambushed and killed Ahmaud Arbery in rural Georgia. It’s hard to find any Black person who wants to view it. It’s triggering in the same way as the murders of Eric Garner, Tamir Rice, and Sean Reed — say those names with me — and countless Black men and women who have been killed by police officers on camera.

Learning about the horrific details surrounding Ahmaud's attack only made my feeling of helplessness worse. That the killers walked around free for three months without charges or arrest. We all know that public outcry makes a difference.

But my thoughts immediately go to this: If it took three months to arrest those men, how many more cases are there where police kill with impunity, ignore actual violence, and go unpunished?

My husband and I have argued a lot in the past three months. He’s been away in New York, taking care of his sister, who’s sick. The distance and isolation amplifies things. Those little things I let go, but still bother me. I don’t always have the bandwidth to address long-standing problems in real time. But there’s an added edge to our talks, which are mostly on video chat.

For the first time in 17 years, I don’t look forward to speaking with him. I hate that. I’m not sure that a kind, loving white guy from Toronto can fully understand the magnitude of what I’m experiencing right now. And I don’t have the emotional strength to express it. Even now, with the person I love the most. I’m too tired to share what’s happening from my eyes and from my soul.

He knows plenty though. He knows about the times when servers or restaurant owners are dismissive to me when I’m just doing my job as a food reporter. He’s witnessed what occasionally happens when entering a restaurant as a couple. We might walk in the door together, but the host doesn’t assume we’re a party of two.

George Floyd’s killing in front of bystanders took my breath away. His killer knew he was being watched, but didn’t care and looked directly at the cameras and onlookers while George took his last breaths. I said right away to my husband, “It’s going to be a very long summer.”

I’m old enough to remember the 1992 protests after the Rodney King beating trial.

The faces protesting the jury’s decision were mostly Black and Brown. I went to college in San Francisco, and the protests were fiery there too. Yet still, mostly Black and Brown protesters. Not anymore. Over the last few weeks, I’ve seen so many of you out there from every single background.

In moments like this, it's always fascinating to see who values property and material objects over human lives and dignity. And that's the police. That’s people who can’t keep their eye on the subject at hand. I am always floored when hearing someone complain about property after seeing video after video of police hitting Black, Latino, Asian, and white people with batons. Shooting at them with rubber bullets, or arresting and cuffing them with overly tightened zip ties. The LAPD failed to protect its citizens exercising their right to protest. And now, others have seen and experienced how they treat us.

I am hopeful. People have time right now to make their presence known and feelings felt. Friends with conservative and pro-law enforcement parents are shocked by George’s death. Their outrage is a significant shift. And now this new group of protesters have experienced violence by the hands of the police or authorities. Mine are memorable throughout my lifetime. Here’s a small sampling:

The security guard who angrily grabbed my 8-year-old arm, then checked my pockets to see if I was a shoplifter.

The one cop who pulled my 24-year-old self over and said, “If you don’t give me your phone number, I’ll give you a ticket.” I gave him a fake one, but he still stalked me for weeks.

The other cop who said I ran a stop sign and said that warranted the search of my car. I refused, and he called me “uppity.”

An unarmed young man was killed by police in '95, and small groups protested. As we walked by cops in riot gear, they muttered all kinds of things to us: "Fucking animals." "Gimme a reason to arrest you." "Get a job." "We're gonna kill you." We kept it moving.

After police chief Daryl Gates resigned in 1992, there was change in the LAPD. There was no going backwards. And I felt that shift. I saw it. It wasn’t perfect, but it was something. So all of those reforms were put into place 27 years ago, and yet we’re back here again in 2020.

Personal attitudes are the next step. Earlier this week, one of my husband’s relatives friended me on Facebook. I met her once over a decade ago, and accepted the request. I didn’t think twice about her until receiving a message on Monday from her that said, “Wanted to reconnect as family, not really interested in political stuff, sorry. I will unfollow you.”

She has the luxury of being able to look away from things happening in the world. She also reminded me of how most believe that racism and bias is this overt thing. But it’s so subtle. In my experience, it’s the grade school teacher who was really nice to white students, but really hard on ones who looked like me. Or the bank teller and manager who wouldn’t let me withdraw money from my own account, even though I had identification. Or the club bouncer who told me, “There’s too many Black people inside, you’re going to have to wait.” Actually, that last one was pretty overt. But there’s a recurring theme going on with this behavior: “You don’t belong here.”

“You don’t belong here” happened when doing my job a few weeks back. While taking photos of the city, I took steps to make sure my clothing wasn’t too threatening, while placing business cards and multiple forms of ID in my pockets. I removed anything from my car that might be mistaken for stolen merchandise. These were all defensive moves that might make a difference if I was stopped. It still didn't stop one cop from aggressively asking what I was doing, and hovering over me while I simply took photos and inquired about a story. Another white woman was doing the exact same thing as me, but the cop did not question her.

And some of my acquaintances and friends are well-intended, but the frequent texts, emails and phone calls asking “how are you doing?” are misguided. Some I haven’t heard from in decades. I don’t have the emotional space to repeatedly explain how I’m doing right now.

My question is: How are you doing with all this? You might be white, but this is your city and country too. Racism and police violence affects everyone, whether you believe it or not.

So I’ll ask again: How are you doing with all this? And more to the point: What actions are you taking to do something about it? And will you stick with this until actual change is here? 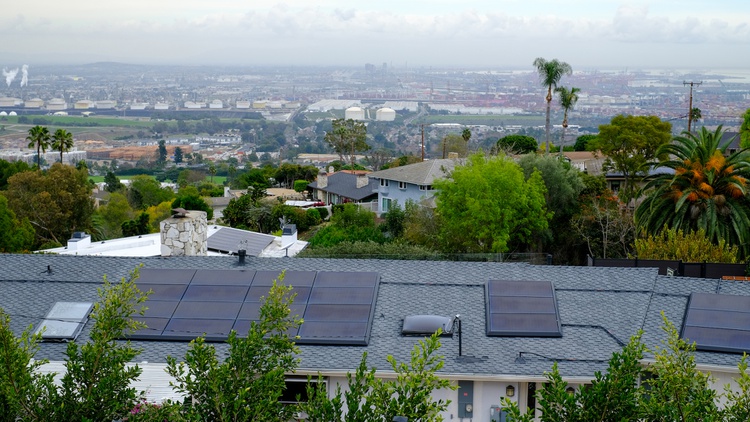 Who are the allies protesting with Black Lives Matter?

The diversity at recent protests has been many years in the making, says one UCLA professor of African American Studies. However, some Black Angelenos are wondering whether...

Greater LA contributor Mona Holmes shares what it was like for her to grow up Black in Los Angeles.

How Hollywood and theaters might change as production restarts

The film and TV industry has been at a standstill for some three months due to COVID-19. Governor Gavin Newsom has now given the green light for Hollywood production to...