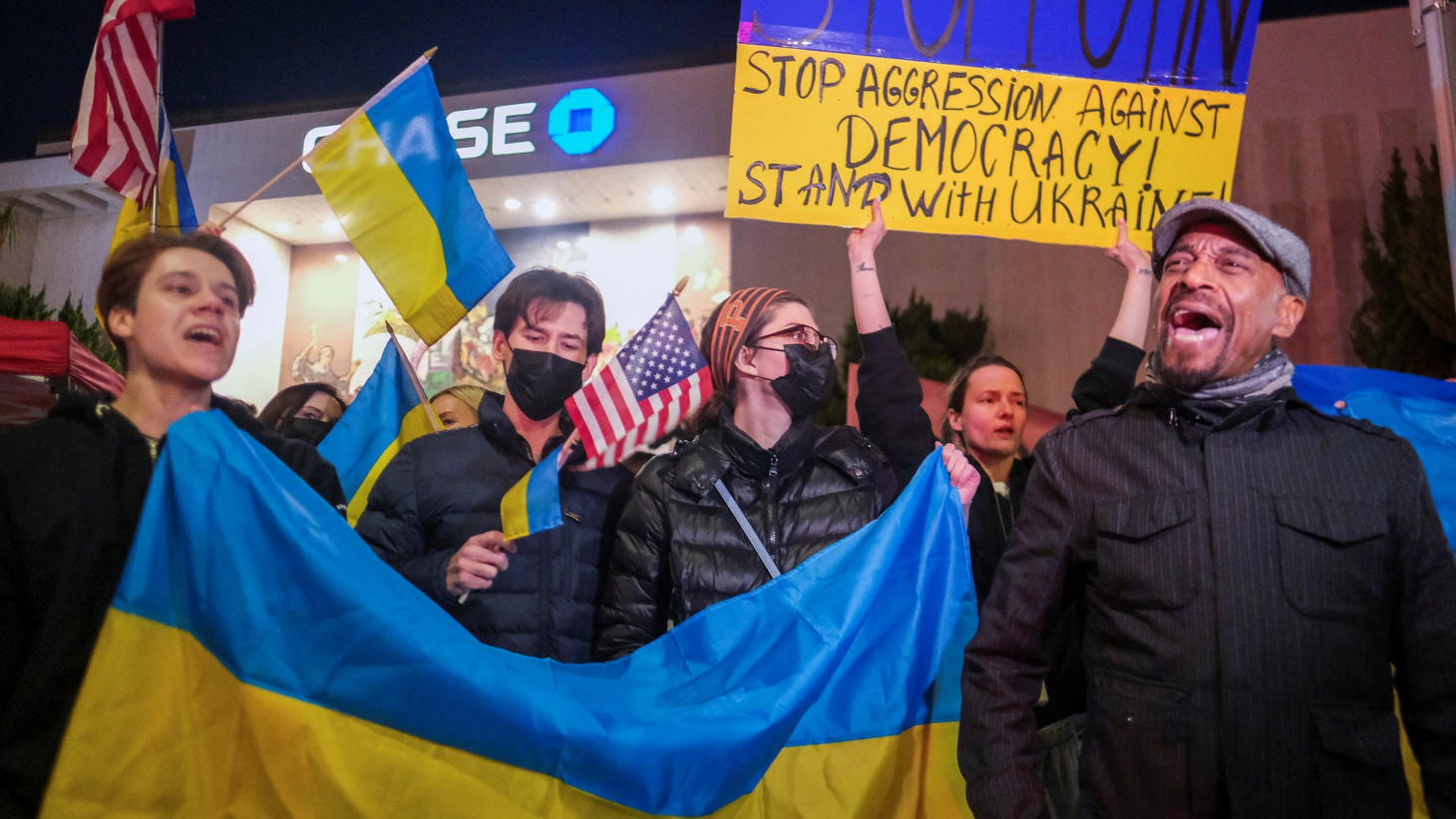 People demonstrate against Russia after it launched a massive military operation against Ukraine, in Los Angeles, California, U.S., February 24, 2022. Photo by REUTERS/Ringo Chiu.

As Russian forces drop bombs and wage a grim and bloody battle across Ukraine, many Ukrainian expats in LA want their neighbors here to understand what’s going on, the context of this conflict, how the histories and cultures of the two countries overlap, and how Ukraine became its own independent nation in the wake of the Soviet collapse.

Iryna Vasylkova, cultural diplomacy program director at the Ukrainian Art Center in LA, was born in the Soviet Union while Ukraine was under its rule. She says at the time, no one was allowed to speak Ukrainian, and Russians burned Ukrainian literature.

Ukrainians even starved to death, she says. “They tried to do everything to wipe us out from the map.”

Vasylkova says her parents raised her to be Ukrainian, even though it was unpopular at the time to do so. “I'm bilingual. I speak … [also] Russian because I went to Russian school. That was the only option in the military town where we lived.”

On August 24, 1991, Ukraine proclaimed its independence, which Vasylkova calls the happiest day of her life.

Ukraine is not part of "little Russia"

If there’s one thing Vasylkova wants Americans to understand, it’s that Ukraine is an independent, free, sovereign country.

“Don't be fooled when you hear that Ukraine is part of Russia, ‘little Russia.’ That is not true.”

Despite the overlapping history, Vasylkova says there is nothing nostalgic or sentimental about the Soviet Union.

Rina Atroshenko left Ukraine in 1975 and now owns Traktir restaurant, which has locations in West Hollywood and Tarzana.

She says most people coming into her restaurant have been confused about what’s happening in Ukraine, but they’ve also been supportive of her and her staff.

“I think this is Putin's war. … Most of the Russian people that come to us stand with Ukraine and don't want to see this happen.”

The new corporate owner of a Huntington Beach mobile home park is increasing rents in March, part of a national and local trend.

As Russian forces wage a grim battle across Ukraine, many Ukrainian expats in LA want their neighbors to understand what’s going on.