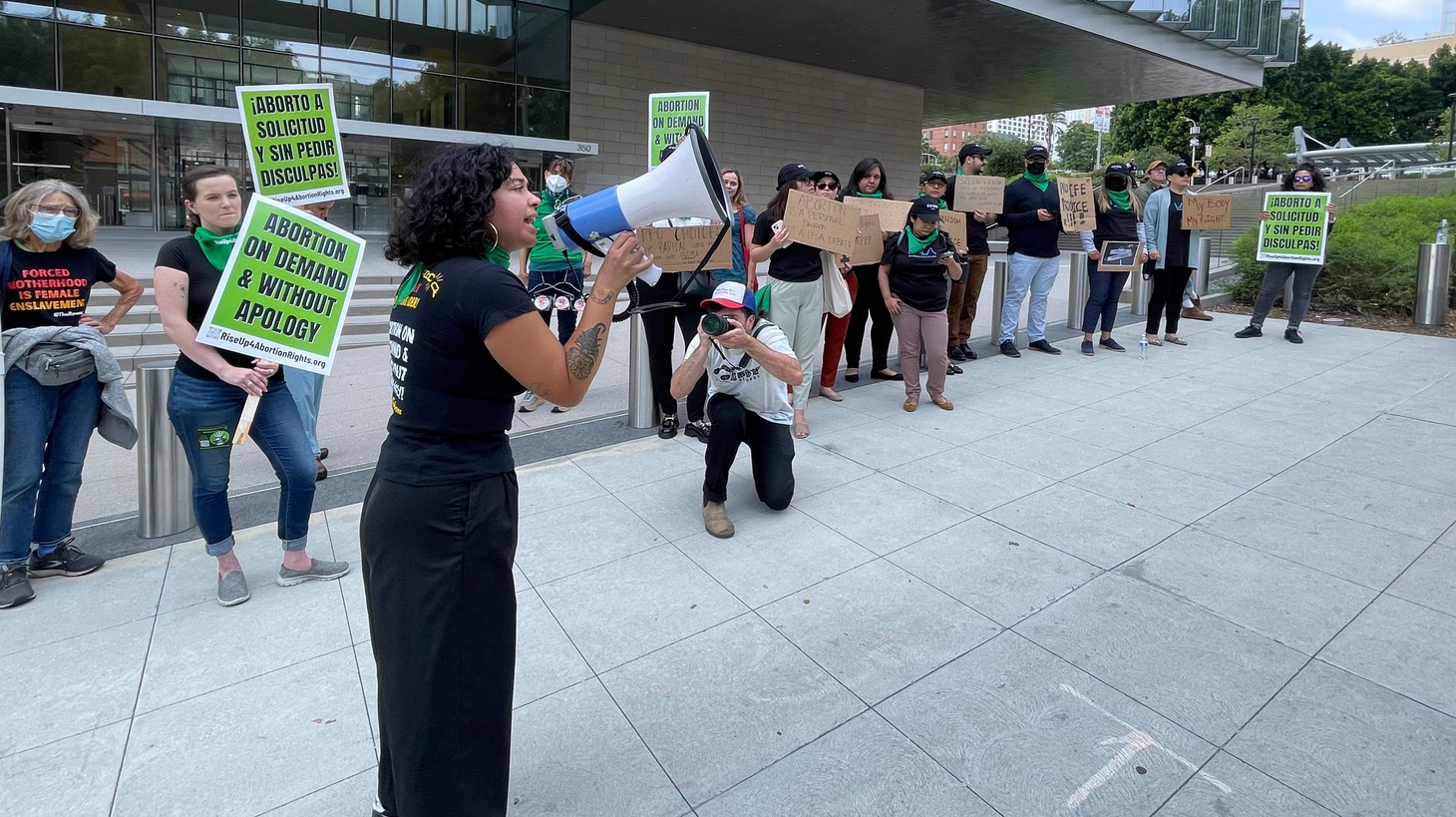 Luna Hernandez plans to continue protesting since it could be a couple of months before the draft decision would be finalized. Photo by Caleigh Wells.

Abortion rights advocates are gathering in downtown LA today after a draft opinion was leaked from the U.S. Supreme Court on Monday. The draft says that after 49 years, Roe v. Wade will be overturned, leaving room for states to ban abortions.

Outside the U.S. courthouse in downtown LA, activists held signs and wore green, which is associated with the green wave in Argentina, and has grown worldwide to represent the pro-choice movement. 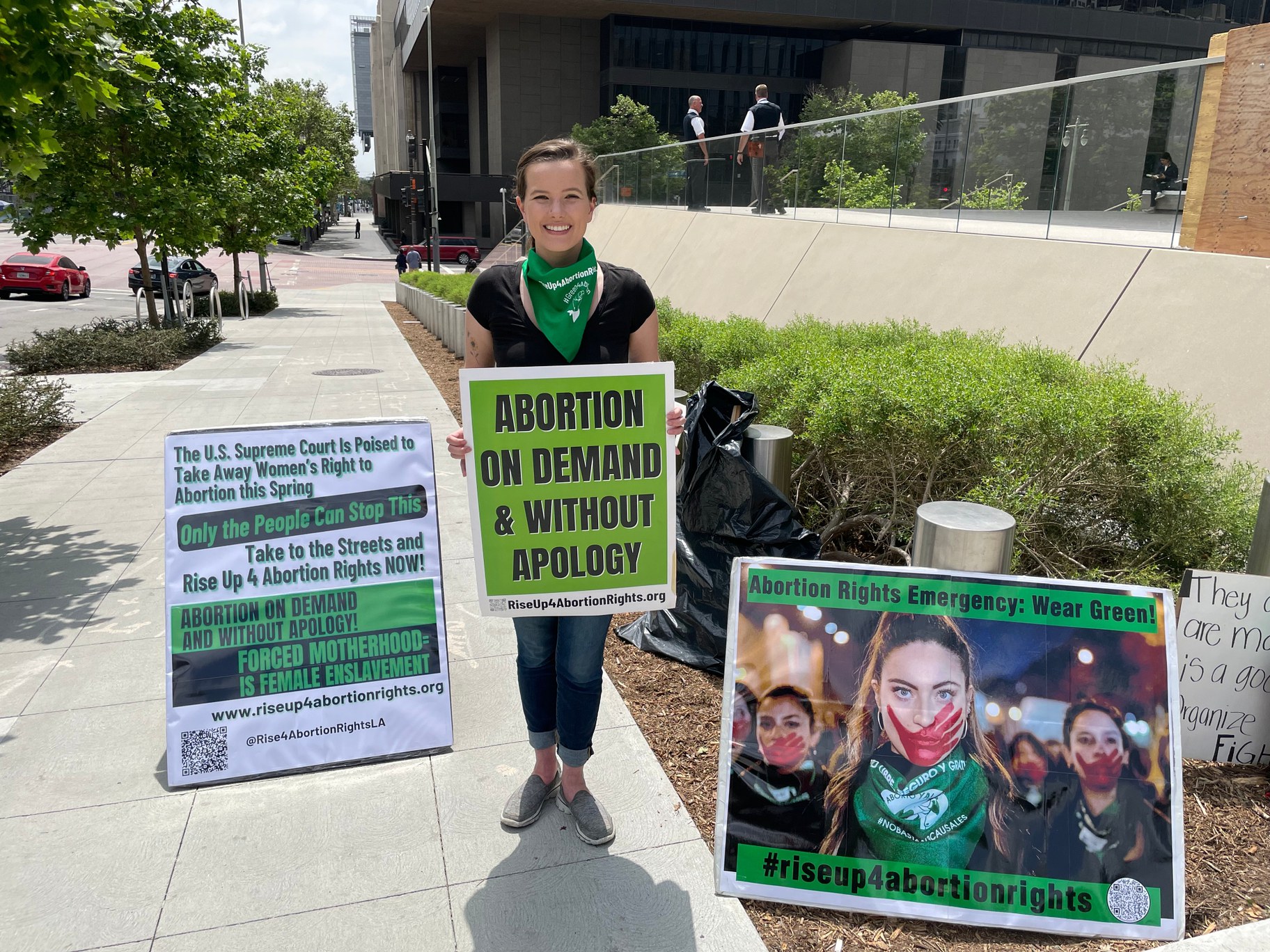 Skyler Soloman handed out green scarves to demonstrators because it has come to symbolize the pro-choice movement. Photo by Caleigh Wells.

Skyler Soloman, one of the lead organizers of the protest, says this won’t be a one-time occurrence. “We’ve been building for mass sustained protests for several months now. And this is a flashpoint. This is a chance for all people of conscience, all people who refuse to go backwards, to take action, not just today, but every day.”

That means a walkout is planned for Thursday, then Sunday kicks off a week of action, culminating in a downtown demonstration on May 14.

Luna Hernandez, a member of the Revolution Club in LA, emphasizes the need for urgency in this moment. “Schoolwork and work pales in comparison to the gravity of the situation of literally millions of women and girls who have been raped, who have been sexually assaulted. … People’s lives [are] at stake. Lives are gonna be destroyed. And history is made by the people.”

Dena Echevarria is a OB/GYN in Los Angeles who performs abortions, and says it’s one of the most fulfilling aspects of her career. She was overcome with emotion when she spoke to her fellow activists. And she’s protesting to support her patients. “I think about how I don’t come from a wealthy family, and I don’t even need to justify why I had my abortion, but I’ve been able to be successful and prosperous because of my access to family planning services.” 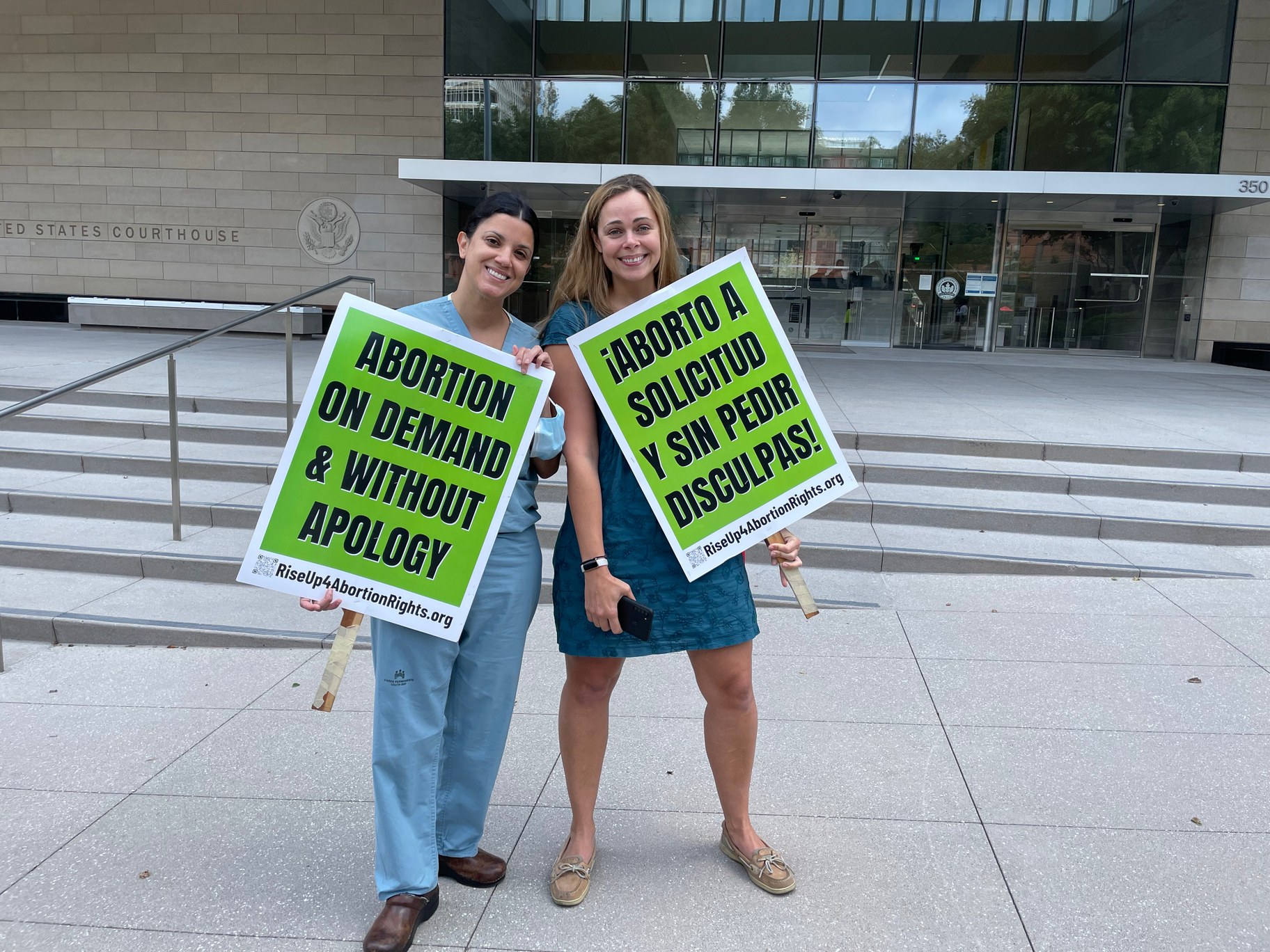 These protesters aren’t alone in their pro-choice sentiments. Nearly 80% of adult Californians and likely voters don’t want to see Roe v. Wade overturned, according to the July statewide survey from the Public Policy Institute of California.

Nationwide, 58% of Americans say abortion should be legal in all or most cases, while 28% say Roe v. Wade should be overturned.

Generations of women have relied on the protections provided by Roe. This dangerous, ill-conceived opinion must not become the law of the land. pic.twitter.com/YxXbevwMD0

We must codify reproductive rights into federal law. The alarm bells were ringing before, but it’s now more urgent than ever. pic.twitter.com/CnhyYbwXlh

California will not stand by as women across America are stripped of their rights.

With @SenToniAtkins and @Rendon63rd, we are proposing an amendment to enshrine the right to choose in the California constitution. #RoeVsWade pic.twitter.com/CAS7m11VRk

Some lawmakers are calling for Congress to pass the Women’s Health Protection Act, which would codify the decision made in Roe v. Wade to protect abortion access. LA County supervisors are considering a motion to make the county a safe haven for abortion access, so no matter where people live, they can come here to get the procedure.

A new short documentary called “Valerie” looks at the early career of actress Valerie Perrine and her current battle with Parkinson’s disease.