Hollywood Boulevard wasn’t always where you’d come to make it in show business. It used to be “where you would come after you had made it — to enjoy the rest of your life surrounded by beautiful flowers and gardens and … be restored to health and sanity,” says journalist and local historian Hadley Meares. “(It’s) crazy to think you would be restored to health and sanity if you moved to Hollywood. Photo by Mike Schlitt.

Hollywood Boulevard is one of the most famous streets in the world — a universal symbol of glamour and fame. It attracts 10 million tourists a year. It’s the destination for dreamers hoping to “make it” in show business.

But Hollywood Boulevard was “not where you’d come to make it, it's where you would come after you had made it — to enjoy the rest of your life surrounded by beautiful flowers and gardens and … be restored to health and sanity,” journalist and local historian Hadley Meares tells KCRW. “(It’s) crazy to think you would be restored to health and sanity if you moved to Hollywood.” 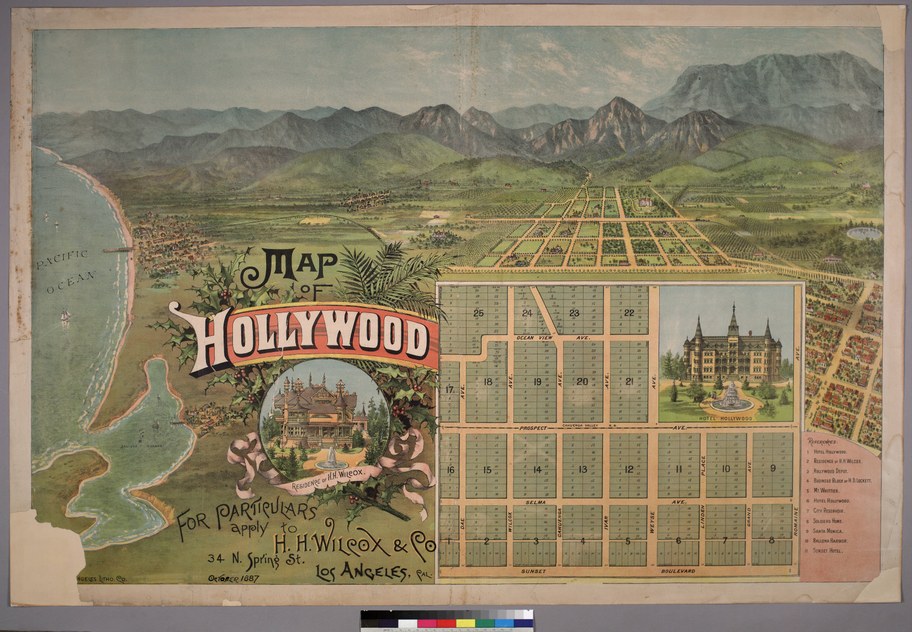 The original Map of Hollywood was registered with LA County in October 1887 by Harvey Wilcox. It’s the first time the name “Hollywood” ever appeared in Southern California. The color lithograph was used to market homes to wealthy midwesterners like Wilcox, promising choice land with ocean views and two railroads at a cost of just $350 an acre. Credit: Huntington Digital Library.

The name “Hollywood” first appeared on a map in 1887, the brainchild of Daeida Wilcox, known as the “Mother of Hollywood.” However, the truth behind the “Hollywood” name is obscured in legend, gossip and lies.

“Did you hear the one about the Chinese laborer hauling wood? That’s fake news,” says Gregory Paul Williams, preservationist and author of “The Story of Hollywood.” 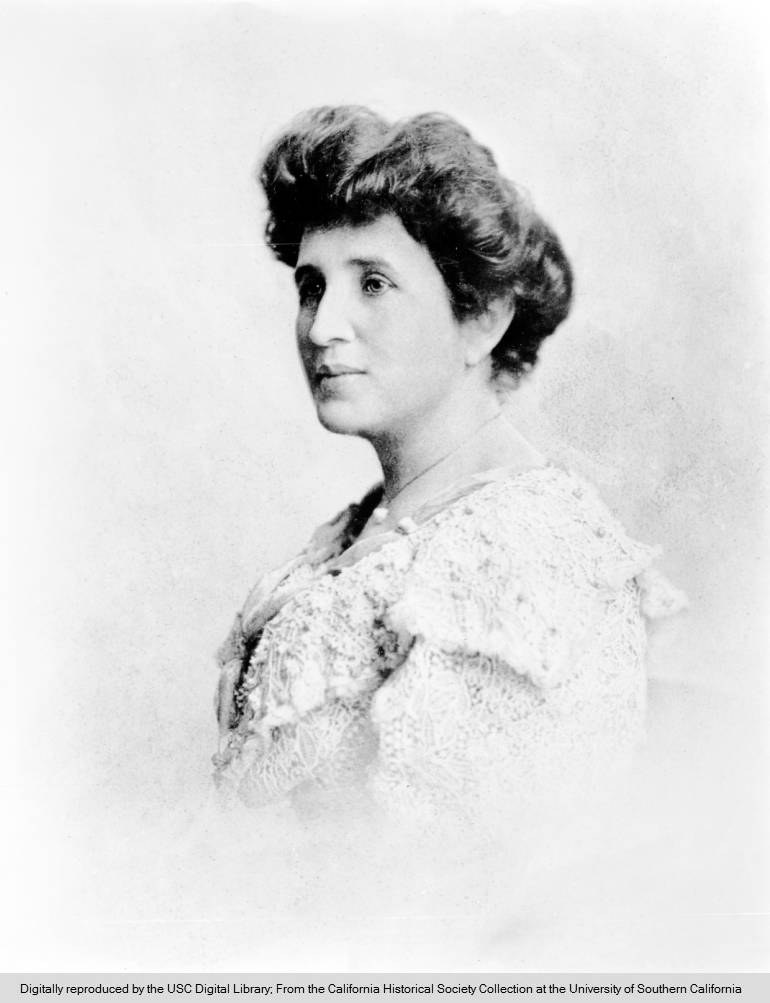 Daeida Wilcox, known as the Mother of Hollywood, moved to LA from Ohio with her husband Harvey in 1883. She fell in love with Cahuenga Valley and dreamed of transforming it into a garden enclave celebrating beauty, culture and art. Credit: University of Southern California Digital Libraries / California Historical Society.

The story of Hollywood began in 1883 when Daeida Wilcox and her husband came to LA from Ohio. They fell in love with the beauty and serenity of the Cahuenga Valley. Wilcox dreamed of building a suburban oasis dedicated to nature and art.

They bought 120 acres of land and began laying out their new subdivision.

By the turn of the century, Hollywood had grown into a wealthy garden enclave of about 500 people. Hollywood Blvd — called Prospect Avenue back then — was its Main Street.

“Paul DeLongpre is literally every single thing that she wants Hollywood to be. Daieda says, ‘Oh my God, please come to Hollywood. I'll basically give you land for nothing. And you can build your home and your studio there,’” Hadley Meares tells KCRW.

Today there’s a Popeye’s Fried Chicken on the corner of what used to be Prospect and Cahuenga. In 1901, it was the site of DeLongpre’s studio — the number one tourist site in Southern California. 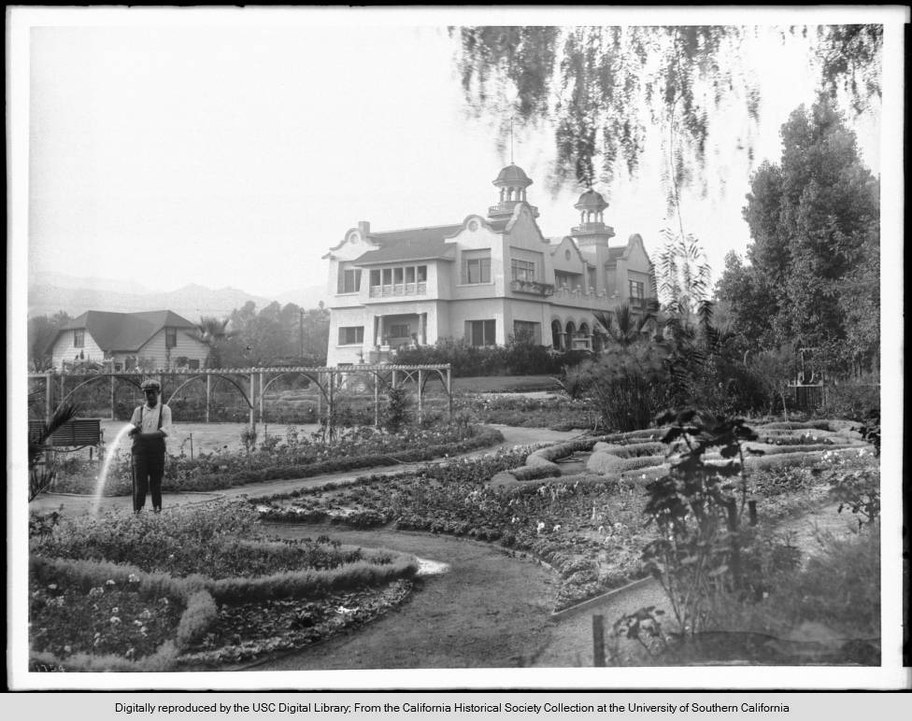 “They would get on tour buses, people coming to Paul DeLongpre’s house in Hollywood and have lunch there, hear a lecture, buy a painting,” historical author Marc Wanamker says.

But Hollywood was changing from a small town into a city. Locals wanted their Main Street to become a brand. Wilcox led a campaign to rename Prospect Avenue after DeLongpre, but most residents preferred the name “Hollywood.

In 1910, despite Wilcox’s objections, DeLongpre got another little side street named after him. The village of Hollywood was annexed by the city of Los Angeles, giving it full access to the city’s water supply and ample room to grow. Prospect Avenue became Hollywood Boulevard.

It was the end of one dream and the start of another. 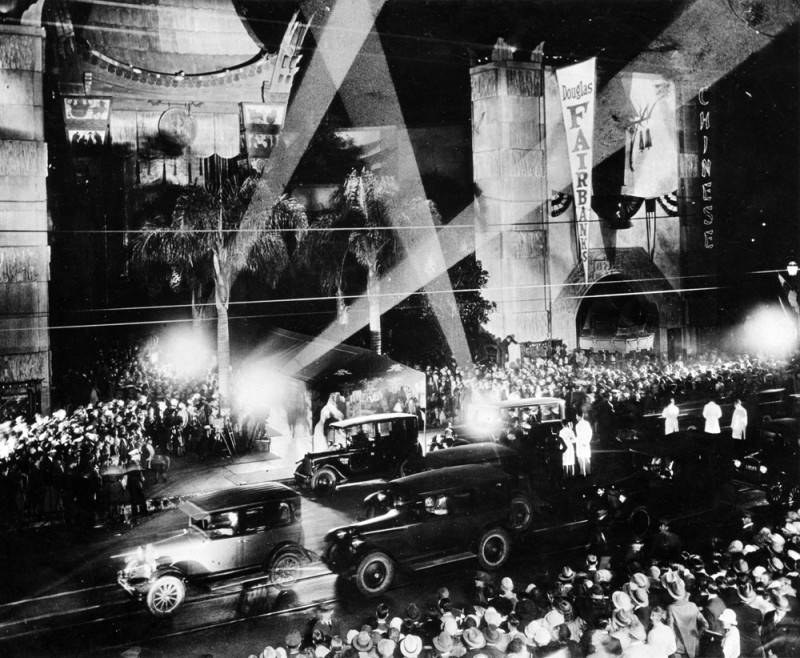 Grauman's Chinese Theatre is illuminated for the premiere of "The Gaucho," November 4, 1927. The Chinese Theatre opened on May 18, 1927. The architecture features a huge Chinese dragon across the front, two stone lion-dogs guarding the main entrance, and the silhouettes of tiny dragons up and down the sides of the copper roof. Among the theater's most distinctive features are the concrete blocks set in the courtyard that bear the signatures, footprints, and handprints of popular motion pictures. Credit: digital collections of the Los Angeles Public Library.

“The movie industry needed a main street. It needed clothing and retail and all sorts of support services. It needed banks. And so up and down the boulevard, the conversions start. And this all occurred very quickly,” says historic preservationist Christy Johnson McAvoy.

In the 1910s and 20s, the boulevard was built up into the concrete jungle we see today. Grauman’s Chinese Theatre, the Egyption Theater, Musso and Frank, the Hollywood Roosevelt, and the El Capitan are the most famous structures remaining from Hollywood’s golden age, when the “Main Street of the movies” captured popular imaginations through World War I, World War II, and the Great Depression.  In a crisis, people need to dream.

After the wars, Hollywood’s wealthier residents moved to the Westside and the Valley. The movie studios left too.

Hollywood Boulevard lost its allure and its economic engine. The Chamber of Commerce decided to create the Walk of Fame.

“It was a brilliant move,” says preservationist Christy Johnson McAvoy. “They hit on a concept that’s been appealing to people since 1958. It’s one of the longest running promotions of any city in the world.”

Oklahoma native Mitch O’Farrell moved to Hollywood in 1982. “I wanted to become an actor, a singer and a dancer. I was twenty-one, I was over the moon.” O’Farrell says.

Today he’s a member of the LA City Council, representing Hollywood Boulevard in the 13th district. “It’s a different role than I ever imagined.”

By the time O’Farrell arrived, the boulevard had fallen on hard times, becoming a magnet for runaways and petty criminals. Tourists weren’t just disappointed, they were afraid of getting mugged.

That’s when the city stepped in to help. Sort of. 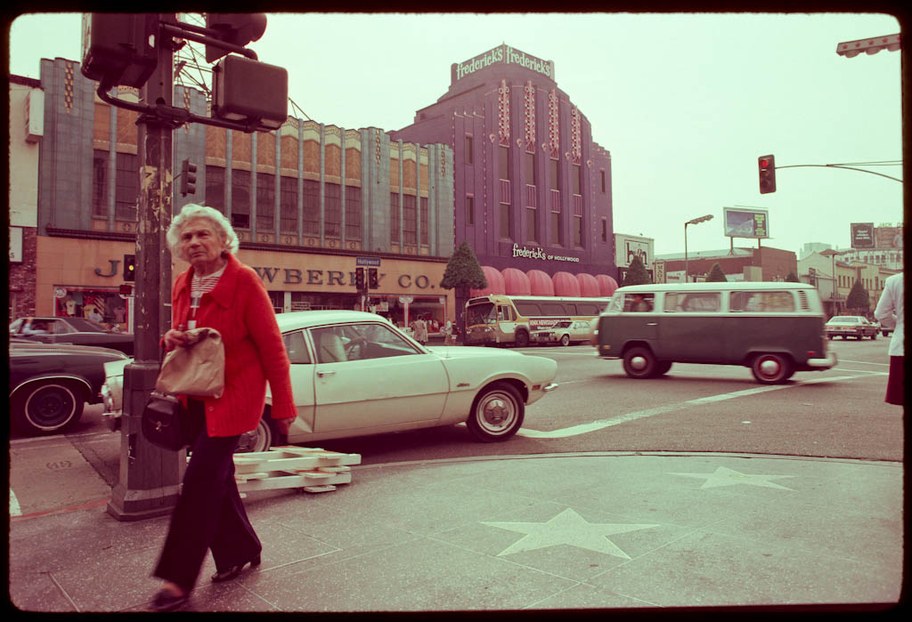 Woman crosses street across from Frederick’s of Hollywood and Newberry’s from “Hollywood in Kodachrome: People of LA 1979 -1982.” Photo by Matt Sweeney (Mudstonephoto).

“The glitter in the street, the fake Klieg lights at Hollywood and Vine that never worked. What a waste of money, all to remind people what was here that's no longer here,” preservationist Gregory Paul Williams says.

A turning point was the year 2000. An injection of public and private funding brought Hollywood and Highland a metro stop, a luxury hotel and a new shopping center — home of the Kodak Theatre and the Academy Awards.

Hollywood and Highland’s giant white elephants are recreations of scenery from Hollywood’s first (ever) multi-million dollar flop. It was a fitting poetic metaphor. The mall was not a success either.

These days, Hollywood Boulevard is planning its next big comeback — with over 30 development projects already in the works before COVID-19. 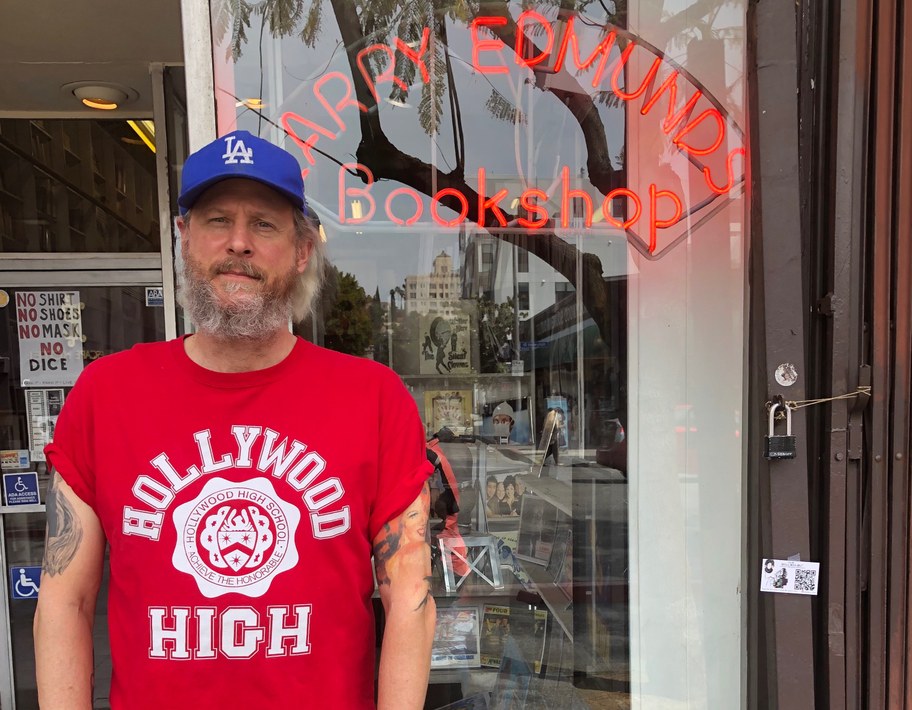 Jeffrey Mantor has been the proprietor of Larry Edmunds’ bookshop since 1991. The store originally opened in 1938. “Every day’s a battle,” Mantor says. “There used to be 14 movie collectible stores in this neighborhood. I’m the last one standing.” Photo by Mike Schlitt.

“They spent $660 million on Hollywood and Highland. That’s chicken feed compared to what’s going on now,”  says Jeffrey Mantor, proprietor of Larry Edmunds Bookshop since 1991. Like many small businesses on the boulevard, Mantor is worried that his days there may be numbered.

“Every day’s a battle. There used to be 14 movie collectible stores in this Neighborhood. Now I’m the last one standing,” he says.

O’Farrell wants to celebrate Hollywood heritage, help its small businesses, and propel the boulevard into the 21st century with a plan he calls the HEART of Hollywood (HEART is an acronym for History, Economy, Arts and Architecture, Renewal and Tradition). 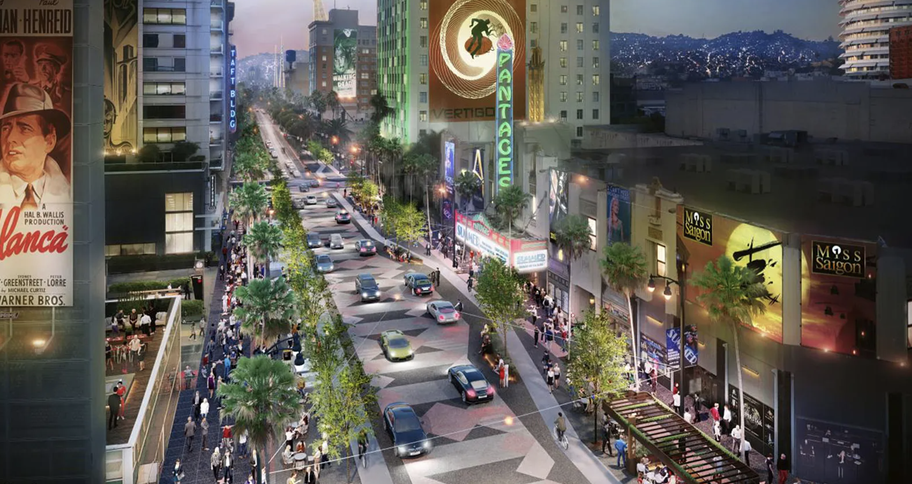 An artist rendering for Mitch O’Farrell’s proposed Walk of Fame master plan, the signature project of his HEART of Hollywood initiative.

O’Farrell’s proposal would encourage more foot traffic by widening the street, and possibly turning a portion of it into a pedestrian mall. It would transform the boulevard into a futuristic art deco movie palace version of New York’s Times Square.

With upscale restaurants, theaters and other retail businesses specializing in what O’Farrell calls “Hollywood only experiences,” he believes the boulevard can capitalize on its history — and at the same time preserve it. At least one important keeper of Hollywood  history agrees.

“I know that Mitch’s heart is absolutely in the right place” says Mark Echeverria, a fourth generation family owner of The Musso & Frank Grill, which makes him close to royalty on the boulevard.

But can Hollywood Boulevard maintain its historic integrity — and keep small business alive — while absorbing billions in private investment dollars? Local historians are pessimistic. Then again, being a historian of Los Angeles is bound to make anyone cynical.

“It keeps me up at night,” historian Christy MacAvoy says.

“I finally had to get out of preservation because I thought this was gonna kill me. It’s too heartbreaking,” adds Gregory Paul Williams.

They don’t call it the Boulevard of Broken Dreams for nothing.

History of Hollywood Blvd: It’s always been about clever branding

A stroll through Hollywood history reveals over 100 years of boulevard branding.

About one in four children and teens have become angry, anxious or stressed since the start of the COVID-19 pandemic. That's according to a study published by The Journal of...