Michelle Perales serves up a plate of birria tacos at the Alameda Night Market. Photo by Benjamin Gottlieb.

For more than 20 years, Amelia Perales has been waking up just about every morning at 5 a.m. to start cooking.

“The birria I prepare is my parents' recipe,” she says, standing behind her food stand Tacos Los Cachoritos. “It has the blood of my parents in it.”

You can find her on weekend nights on E 21st Street, a narrow industrial road just off Alameda at the new Alameda Night Market. 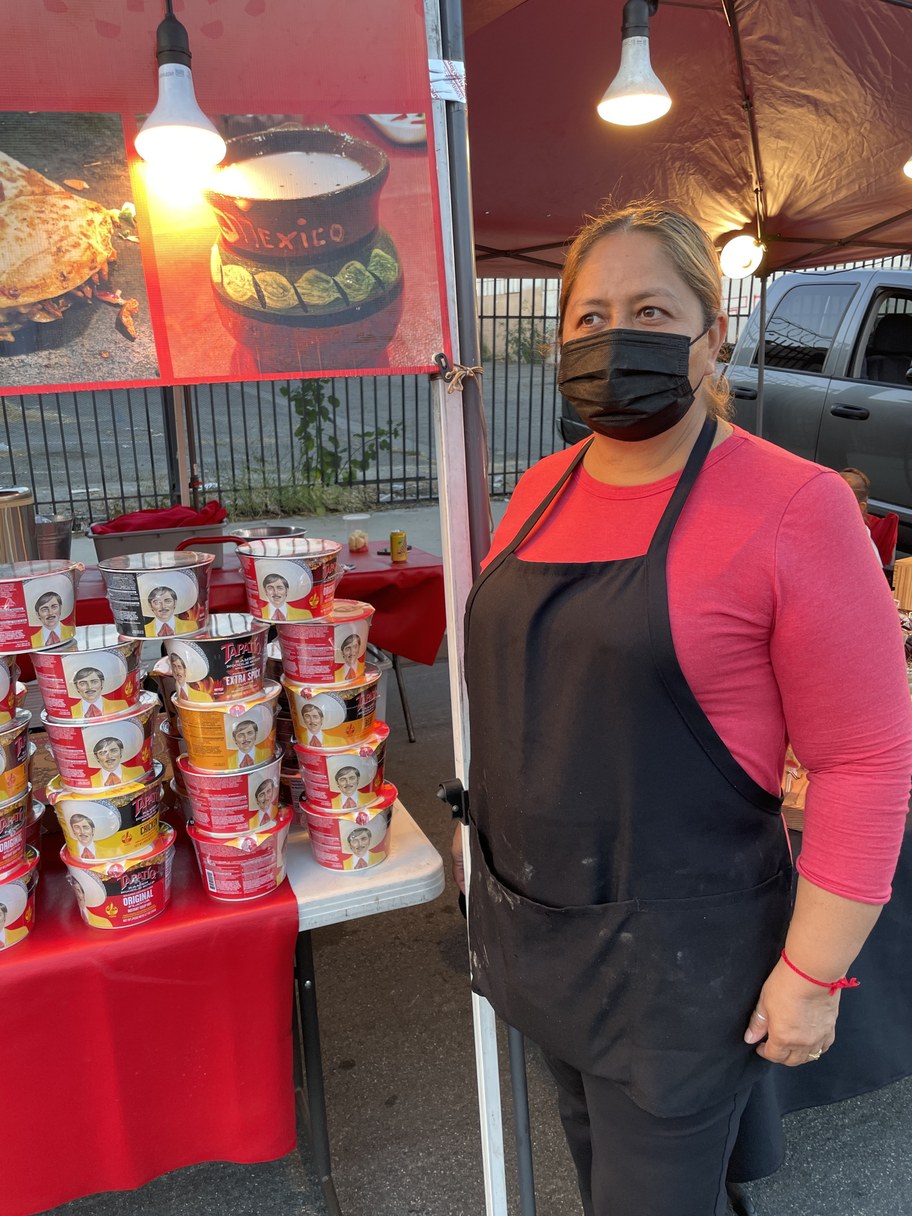 Amelia Perales stands outside her birria stand at the Alameda Night Market.

For years, she sold birria tacos and ramen at the old Avenue 26 Night Market in Lincoln Heights, which became popular during the pandemic due to social media. But earlier this month, LA city officials shut it down. LA City Councilmember Gil Cedillo cited “illegal alcohol sales, public defecation and urination, and crime and violence” as reasons why. Neighbors had complained too about blocked streets and sounds of gunshots.

With the market closed, Perales and a couple dozen other vendors were without a home.

The future of LA’s street markets often rests in the hands of a few elected officials who, with a phone call or stroke of a pen, can decide whether or not they stay open.

Popping up here and there makes it hard to build a business and to establish a cultural space in neighborhoods.  But moving indoors can be expensive for mom-and-pop operations, which are often run by immigrants unprepared to deal with city and county rules.

“We want to be able to pop up and not have to worry about anything. But the city makes it impossible to feel that way,” says Elizabeth Calderon, who runs the dessert stand BabyCakes and is one of the organizers of the new Alameda Night Market. “So we just got to do it. We got to do what we got to do, right?”

This new market is in the district of City Councilmember Curren Price, who checked it out for the first time last weekend.

“I have a lot of vendors in my district,” Price says. “As we come out of this pandemic, we ought to be supporting businesses of all sizes, especially these microbusinesses.”

Price says that while he supports this new open air market, he sees these vendors eventually moving into a brick and mortar storefront or a food truck. But that can often be out of reach for many vendors, says Nellie Tran, who runs the soon-to-be open Blossom Market Hall in San Gabriel. 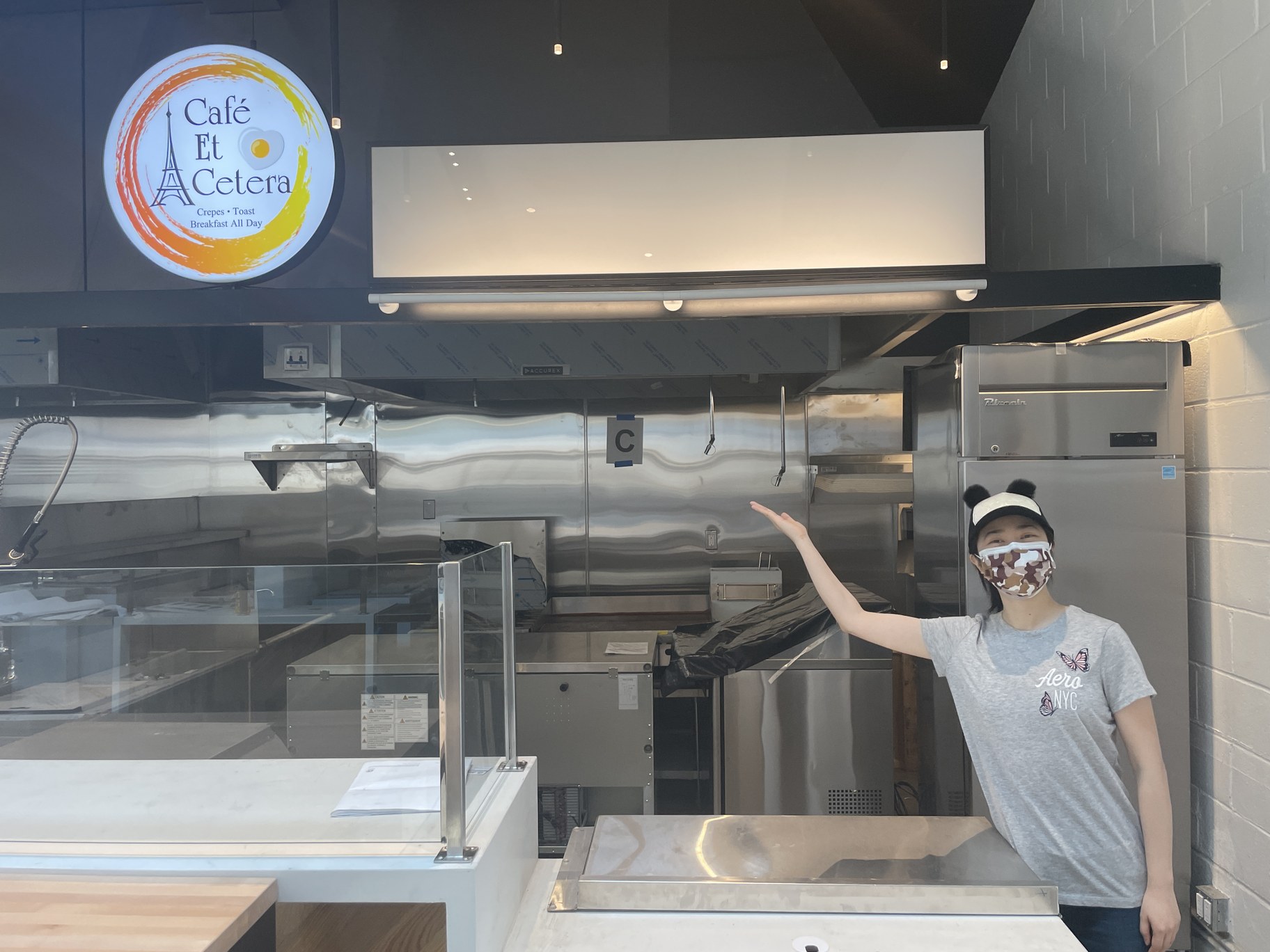 Jessia Wu shows off her food hall kitchen at the Blossom Market Hall in the city of San Gabriel.

“I wish it were easier for street food vendors to set up a restaurant,” Tran says. “But there are so many barriers with the rules [and the] health and business codes.”

Tran says food halls like hers could be a possible solution. Several have opened around LA in the last few years. Tenants share the cost of rent, and benefit from other vendors attracting customers. Plus they’re private businesses, not subject to the whims of an elected official.

Jose Galindo, one of the Alameda Night Market organizers, says he’s looking to rent one of the warehouses near the new street market to protect the vendors from being evicted again.

“We need something to take us off the streets more than anything, provide something safer for ourselves, our children,” Galindo says. “I think ... it's the best fit for all of us.”

The future for street vendors: Open air market or brick and mortar?

The fate of LA’s street markets often rests in the hands of a few elected officials who, with a phone call or stroke of a pen, can decide whether or not they stay open.

South Bay Wildlife Rehab in Rancho Palos Verdes has taken in more than 300 birds this year, and is currently bulging at the seams with 111 patients.