LA’s taxpayer-funded $38 million program called “BIG:LEAP” will allot $1,000 per month to 3,200 families in poverty, starting in January 2022. Photo by Shutterstock.

When Luis Rivas learned by watching a TV news report that the City of Los Angeles was going to start handing out $1,000 per month to selected needy families, he figured out where he needed to be.

It was on a Central Avenue sidewalk outside the office of Councilman Curren Price in South Central LA, first thing on a recent Monday morning.

“It’s going to help me a lot because I pay $2,500 in rent. I had a little savings for the COVID situation, but I spent all my money and I had zero. I’m really broke,” Rivas says. “I can’t find a job, that’s why I’m here. I have my wife and I have two boys. One is in school and the other one is unemployed too. Now, it’s really hard for us.”

Rivas is one of more than 59,000 LA families to apply for the money during a 10-day application period, which closed Sunday. Some filled out online surveys to be considered, while others applied in-person at drop-in application centers.

The cash giveaway is part of the largest guaranteed income experiment in the country. Starting in January and throughout 2022, the City of Los Angeles plans to give 3,200 families in poverty $1,000 a month — with no conditions.

The $38 million program is called “BIG:LEAP” (Basic Income Guaranteed: Los Angeles Economic Assistance Pilot). To be eligible, families must live in LA, have at least one dependent child, and earn income at or below the federal poverty level, which is $12,880 for individuals or $26,500 for a family of four.

City officials say there are at least 500,000 families in LA that meet those criteria. 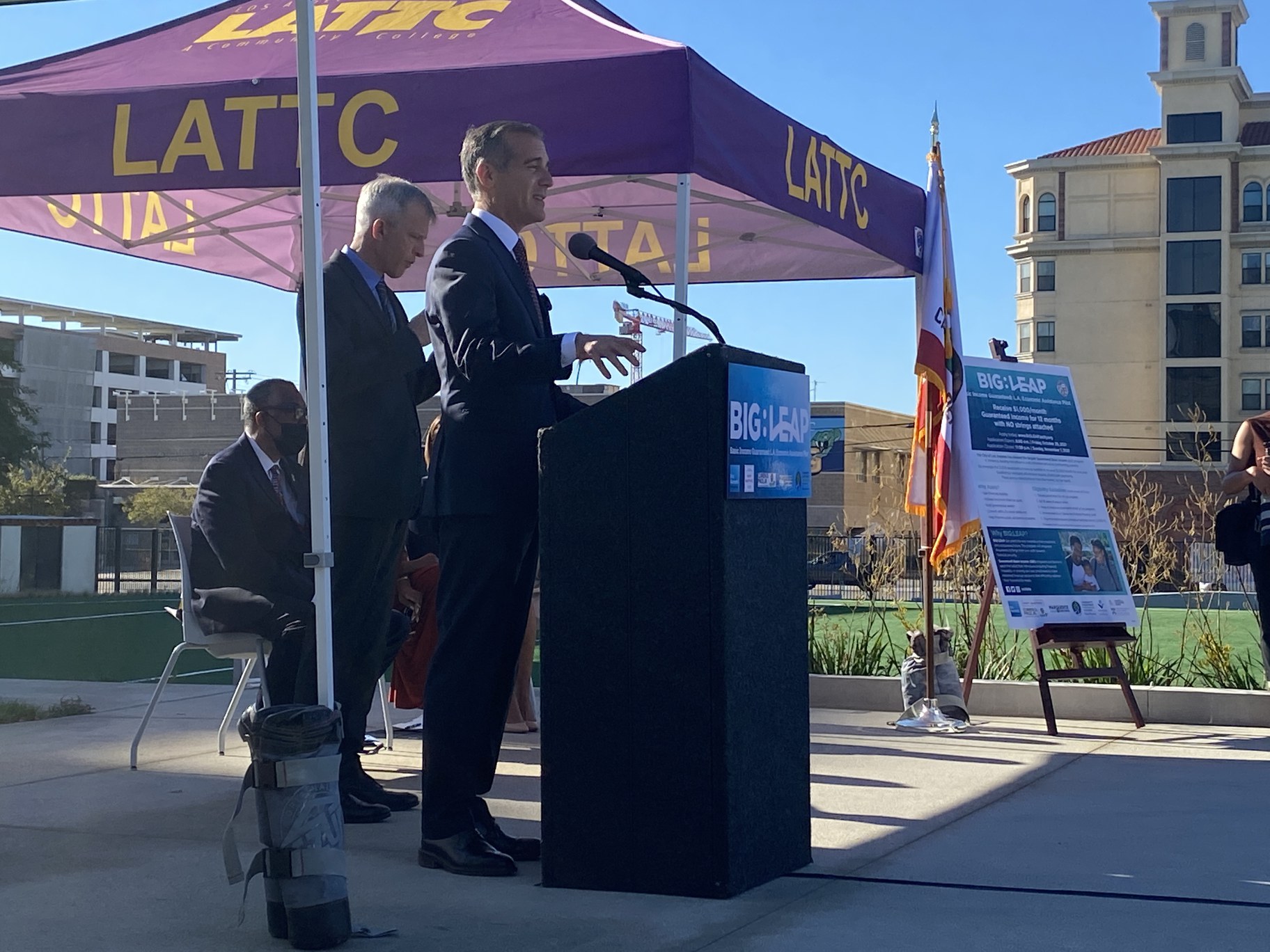 Bonnie Morales, 34, stood behind Rivas in line. She had a baby during the pandemic and lost her job at a bakery.

Child care was top of mind for many applicants in South LA, like Andre Howard, Sr.

“I’m raising my grandchildren because their parents passed away, so I’ve had them now for like six years,” says Howard. “It’s been a struggle for us, but we’ve been together. We’ve been homeless at one point.” 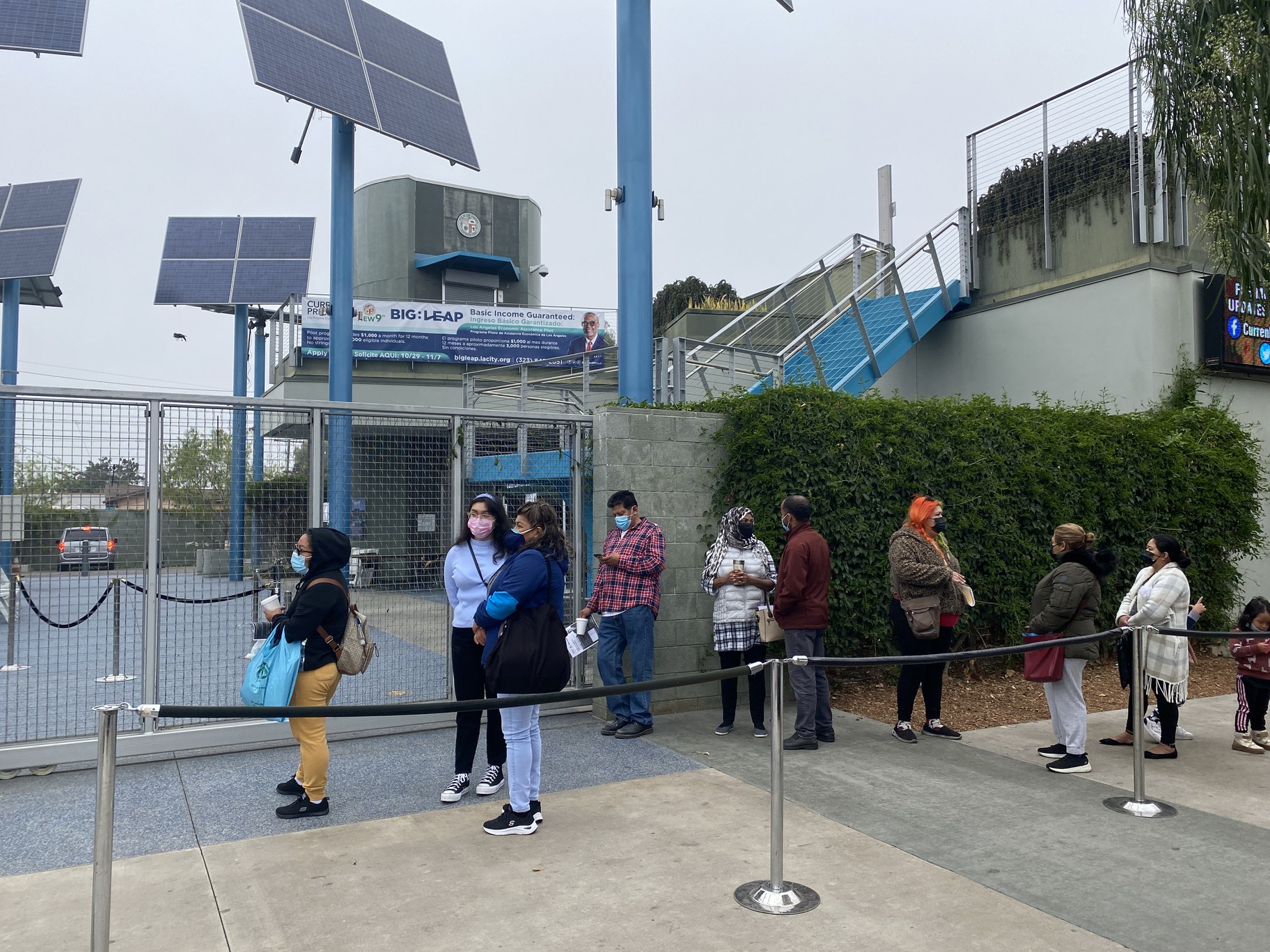 Applicants for LA’s basic income pilot line up outside the office of City Councilmember Curren Price in South Central LA. Because of its high concentration of poverty, 780 of LA’s 3,200 basic income recipients will be chosen from Council District 9.  Photo by Aaron Schrank.

At a news conference to announce the program, District 9 Councilmember Curren Price emphasized the need in his area: “With a median yearly income of less than $30,000, this community, our community, struggles day in and day out to maintain the most basic necessities.”

Applicants won’t know whether they’ve been randomly selected to receive the cash or not until January, when the first checks will go out. An additional 3,500 applicants will be invited to be part of a control group.” They won’t receive cash, but will be surveyed and compared against those who do.

Responses will be used by researchers to measure how exactly $1,000 a month changes people’s lives.

LA’s pilot is based on a similar study in Stockton, California, where 125 residents received $500 a month for two years. In Stockton, researchers found those who got the money were twice as likely to land full-time jobs as those who did not. They also reported lower rates of anxiety and depression.

"So we saw people move from likely to have a mental health disorder because of anxiety or depression into the category of likely to be well simply by providing cash,” says Amy Castro, director of the Center for Guaranteed Income Research at the University of Pennsylvania, and the principal investigator on LA’s new pilot as well as Stockton’s.

“Needs are flexible, and the only thing that’s as flexible as needs is cash,” she adds. “You can’t budget your way out of poverty. If you could, all this money that’s been poured into financial literacy would have resulted in upward mobility. And it hasn’t. Because poverty by definition is lack of cash.”

While the Stockton study was funded by private philanthropic dollars, LA’s $38 million program relies on taxpayer funds. Dozens of U.S. cities have basic income experiments underway, including Compton, California. LA County and the state of California are also moving forward with similar programs of their own.