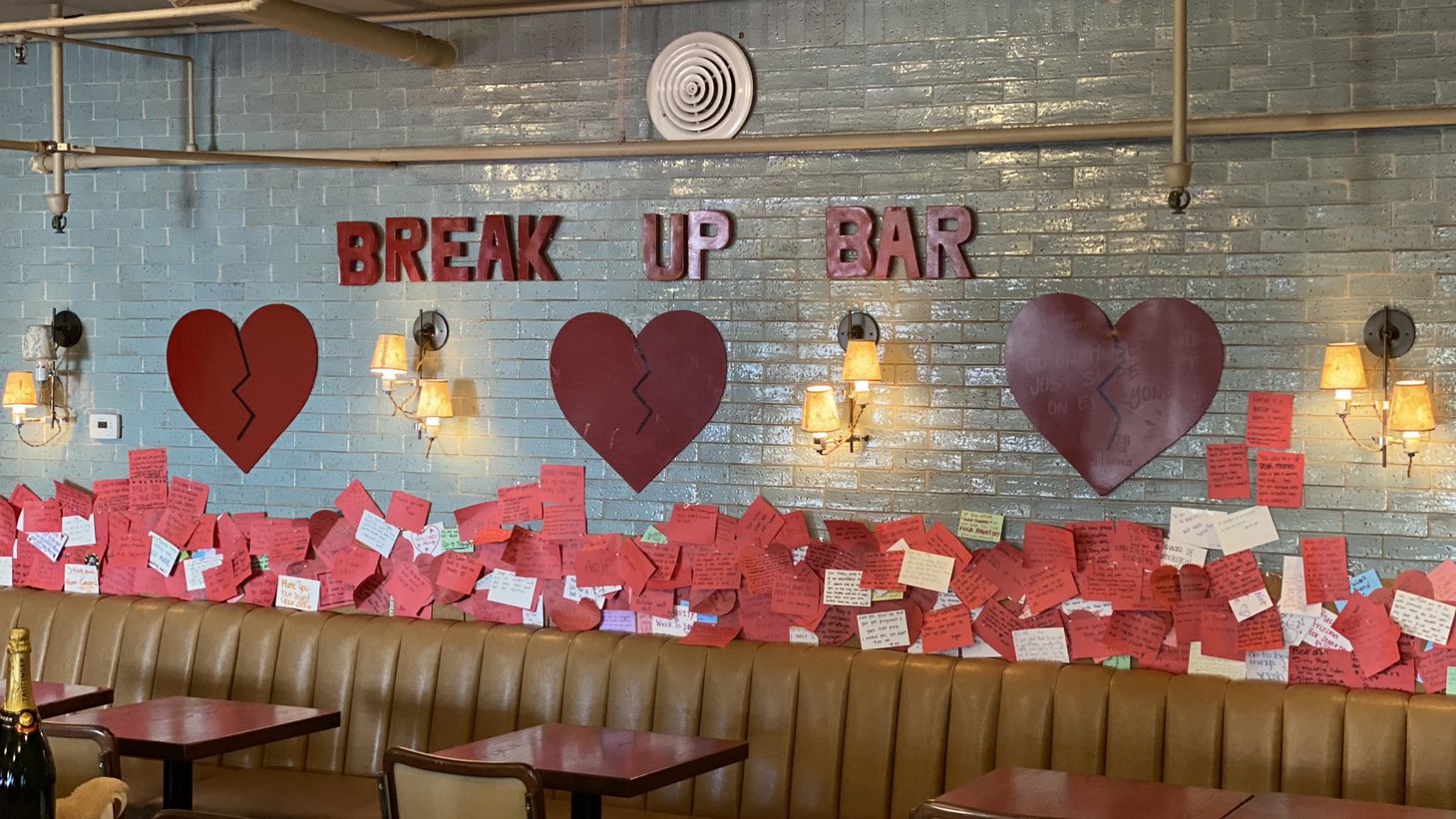 Immersive pop-up The Break Up bar caters to Angelenos in need of a place to vent after parting ways with a lover. Photo by Evan Charest.

You know what kind of ride you’re in for when you glance at the specialty cocktails menu: the mezcal-laden “Tears of My Ex,” a cognac and lavender-infused “Forgot My Birthday,” and the tequila-heavy “I Dealt With Your Parents For Years.”

A quick look around, and you get the full picture, especially with the Wall of Broken Relationships. It’s a 10+ foot memorial that is plastered with red and white heart-shaped letters written to former lovers. And in each handwritten confession, you can feel the pain. They’re Hemingway-esque stories of tragedy:

“You invited me to Hawaii, yet you took your girlfriend of 10 years and proposed.”

“You left me to be with somebody who is literally grosser than dirt under my shoe.”

“I should’ve listened to my mother.”

To the right, a dartboard shows Matt Damon’s beautiful face pinned murderously to its bullseye.

Welcome to the Break Up Bar.

Some may come to the Break Up Bar to cry. Others have a more aggressive set of feelings to work out.

“I married somebody that I thought was the one, and then they ended up to be trash,” says Gaby Moreno from Hawthorne. And at a recent Sunday brunch, she’s ready to dish. She’s got a right to. In between sips of her drink, she explains, “And then I found somebody else who I thought could potentially be the one. He ended up having a whole family.”

Dejected, she laughs in disbelief, then goes on, “You think you know somebody and you just don't.” 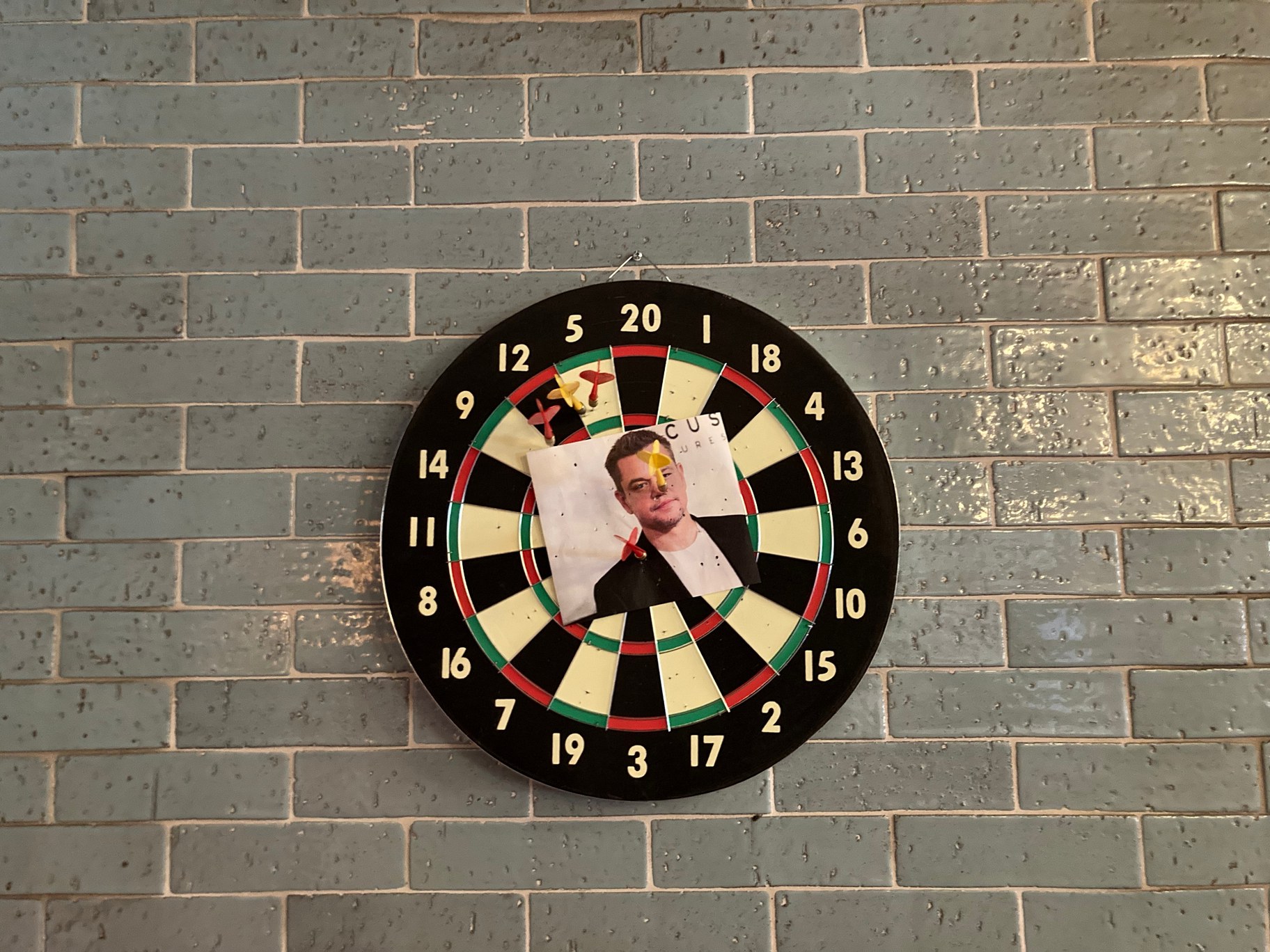 Need a target for pent-up rage after a breakup? Matt Damon’s face could be an outlet. Photo by Danielle Chiriguayo/KCRW.

The Break Up Bar first splashed onto the LA scene as a pop-up inside of the Severance Wine Bar in the heart of Melrose in 2019. The point, says owner Evan Charest, is to give brokenhearted people the anti-Valentine’s Day space they need in the weeks leading up to this Hallmark holiday.

“There's just so much pressure built up. What about the single people? What about people that just want something that's the alternative to the chaos of the holiday?” Charest tells KCRW. “It's the cathartic pop-up bar of your dreams.”

He continues, “I just don't think there's a lot of … safe spaces to break up publicly in, not the physical act of breaking up, but the recovery of it. I think it's a very personal solo experience. And no matter how many friends or understanding parties you have, there's that general mentality of ‘just get over it.’” 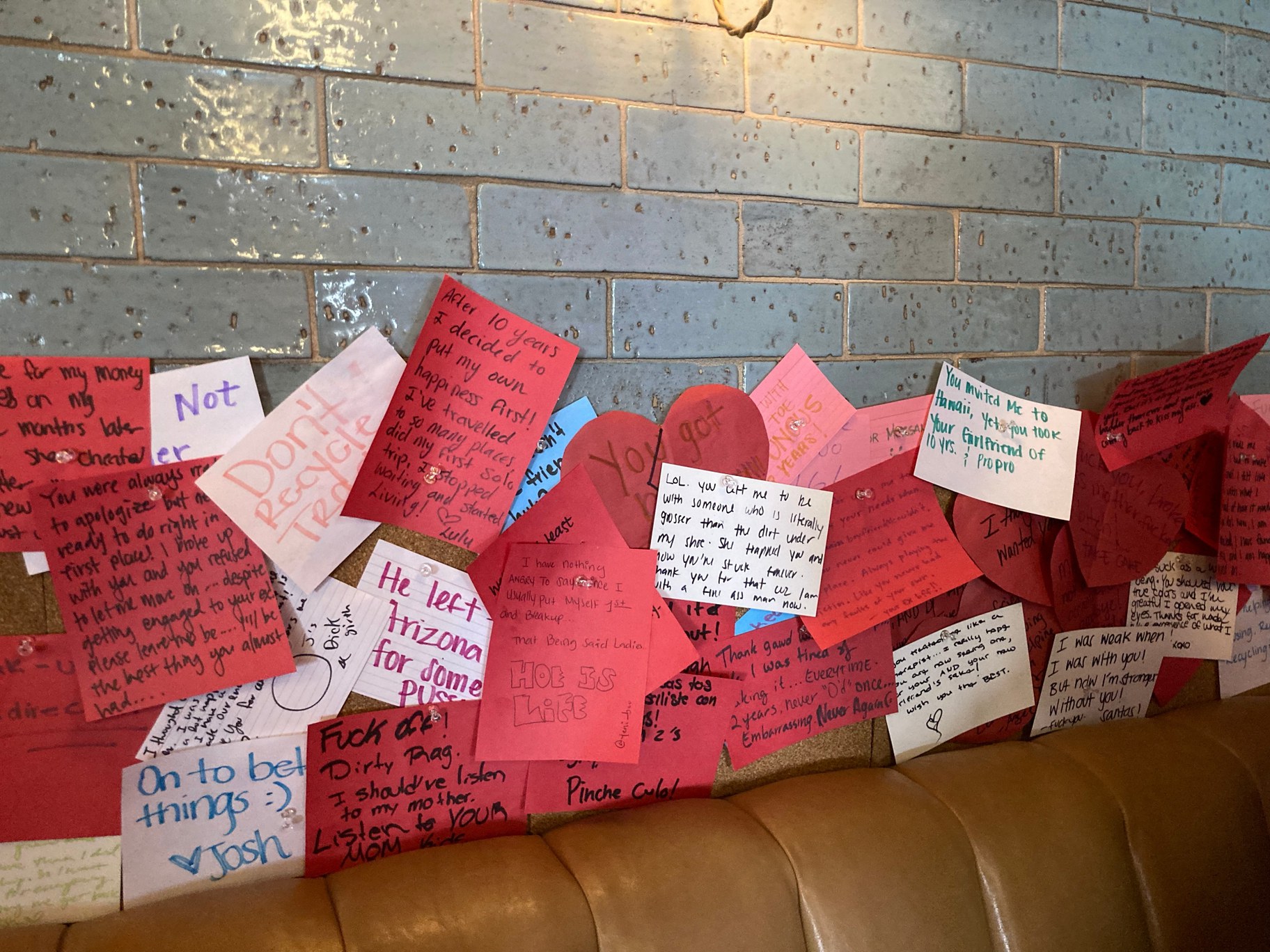 Patrons at The Break Up Bar are encouraged to share their stories about past lovers. Photo by Danielle Chiriguayo/KCRW.

Here, your fellow bar patrons are not over it, and you don’t need to be either.

Amber Jara drove to Melrose from Southeast LA for some catharsis. She says that her ex-boyfriend gave her COVID before he dumped her last month. The wounds are still fresh.“There’s a lot of hate,” she says. “I’ve never hated anyone, but this one’s different.”

After a bit of champagne and some camaraderie at the bar, Jara mellows a little. She came out to the bar with her best friend, Alyssa Sosa, who was ready to write a scathing letter to her former boo.

“I wanted mine to be super rageful and revengeful,” Sosa describes her initial plan. “But now I think I just want to write a whole paragraph of everything I wanted to say. … I feel like this wall is almost closure, like the things you didn't get to say to your ex. If I really wanted to say something, would I want it to be heavy, or do I want it to be heartfelt? I don't know.”

For many, The Break Up bar is an escape from the chaos of the highly capitalistic Valentine’s Day. But at the end of the day, glancing up at the Wall of Broken Relationships, Moreno says it’s a reminder that everybody hurts, but you don't have to do it on your own.

“The thing that caught my eye was [knowing] that you're not alone in the feeling of feeling alone. I think that it can get a little bit lonely sometimes to just think like you're the only heartbroken person in the world,” Moreno shares. “Coming here, you can see that a lot of people have gone through the same things that you've gone through, and are equally as sad. And [it] gets better for everybody.”

The Break Up Bar wraps up its residency at the Palihotel Melrose on February 14, but Charest promises an even bigger bash in 2023.

LA’s latest pop-up, The Break Up Bar, is a safe space for haters of Valentine’s Day. Patrons here can find healing together.

Erik Braverman and Jonathan Cottrell talk about getting married on the pitcher’s mound at Dodger Stadium, and how it’s taking time for pro sports to accept the LGBTQ...

What in carnation? Why fresh flowers are in short supply

Flowers are in short supply worldwide due to the pandemic and supply chain issues. California florists are getting creative in case their orders can’t be filled.