A marijuana leaf grows in a greenhouse at Autumn Brands in Carpinteria. Photo by Kathryn Barnes/KCRW.

Some people love the smell of fresh, flowering buds. But for those who live along Highway 192 in Carpinteria, informally known as “Cannabis Alley,” the scent has become a nuisance.

Five years ago, California voters legalized recreational marijuana. Since then, the cannabis industry has ballooned in Carpinteria, as growers quickly converted greenhouses previously used for the city’s booming cut-flower industry into more than 165 acres of cannabis, including nurseries for baby plants and processing space.

“These ones are going to be more like a Dreamwalker. We have a Strawberry Banana. So every one will smell a little differently,” says Autumn Shelton, who grows four acres of cannabis in Carpinteria greenhouses for her business, Autumn Brands. “We even have one that's called GMO, that stands for garlic, mushroom and onion. It is quite a funky smell, but it is so popular.”

The smell, among other things, has divided Carpinteria for years. In city council meetings, residents complained they couldn’t open the windows of their home without the stink creeping in. Growers accused residents of falsely blaming weed for their asthma and other health issues.

But Carpinterians did more than point fingers. Over the years, they’ve made some changes.

“This is our current odor abatement system, the Bayer Scientific vapor phase,” says Shelton, exiting the greenhouse and pointing at a large plastic tub of liquid hooked up to a noisy machine.

Inside the tub is Ecosorb, a liquid solution that gets vaporized and pumped through a perforated pipe distribution system around the perimeter of each greenhouse. It absorbs and neutralizes the odor compounds from cannabis as they sneak out of the vents. The technology is used in similarly smelly industries, like liquid waste plants and meat processing facilities. 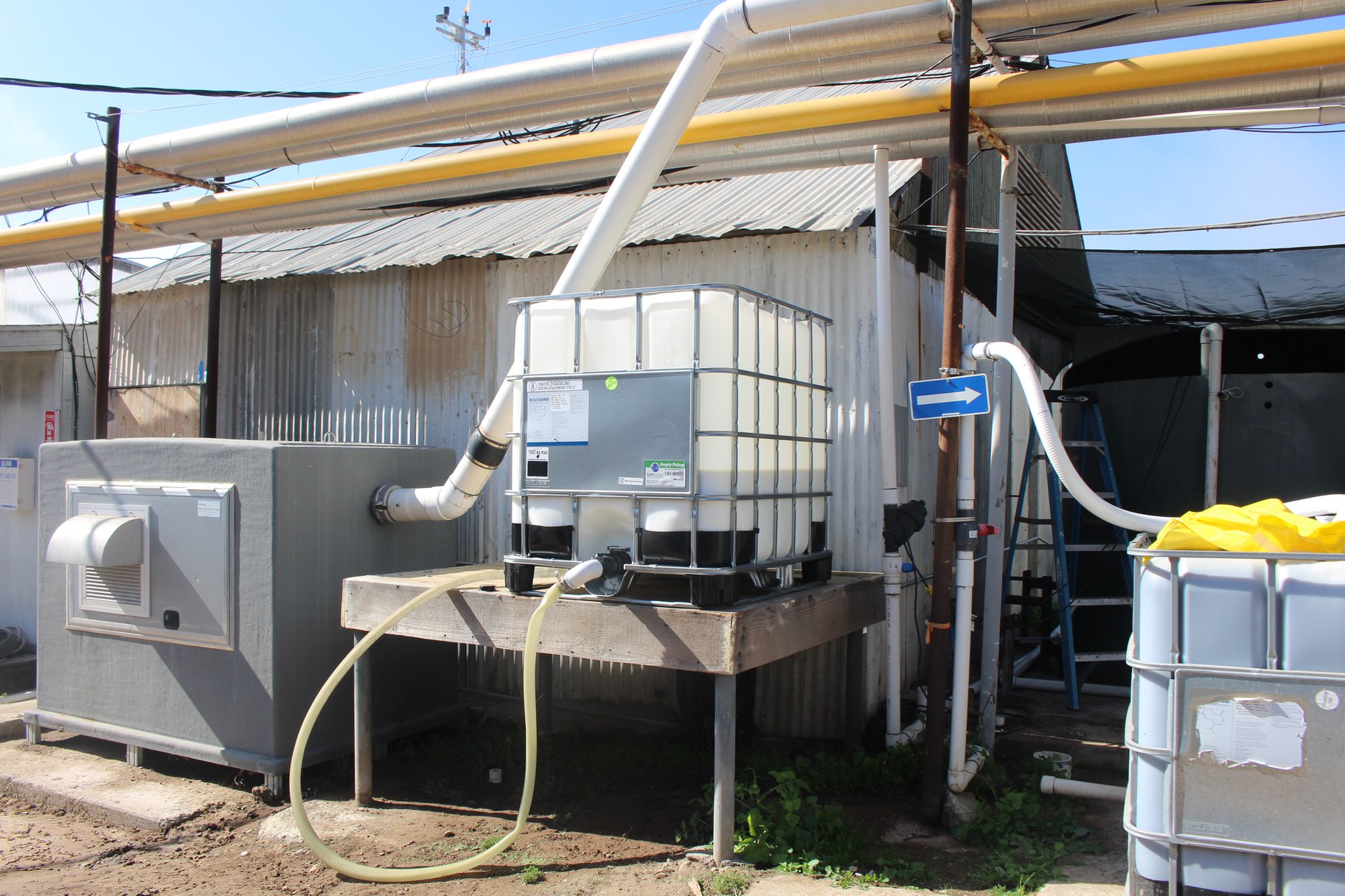 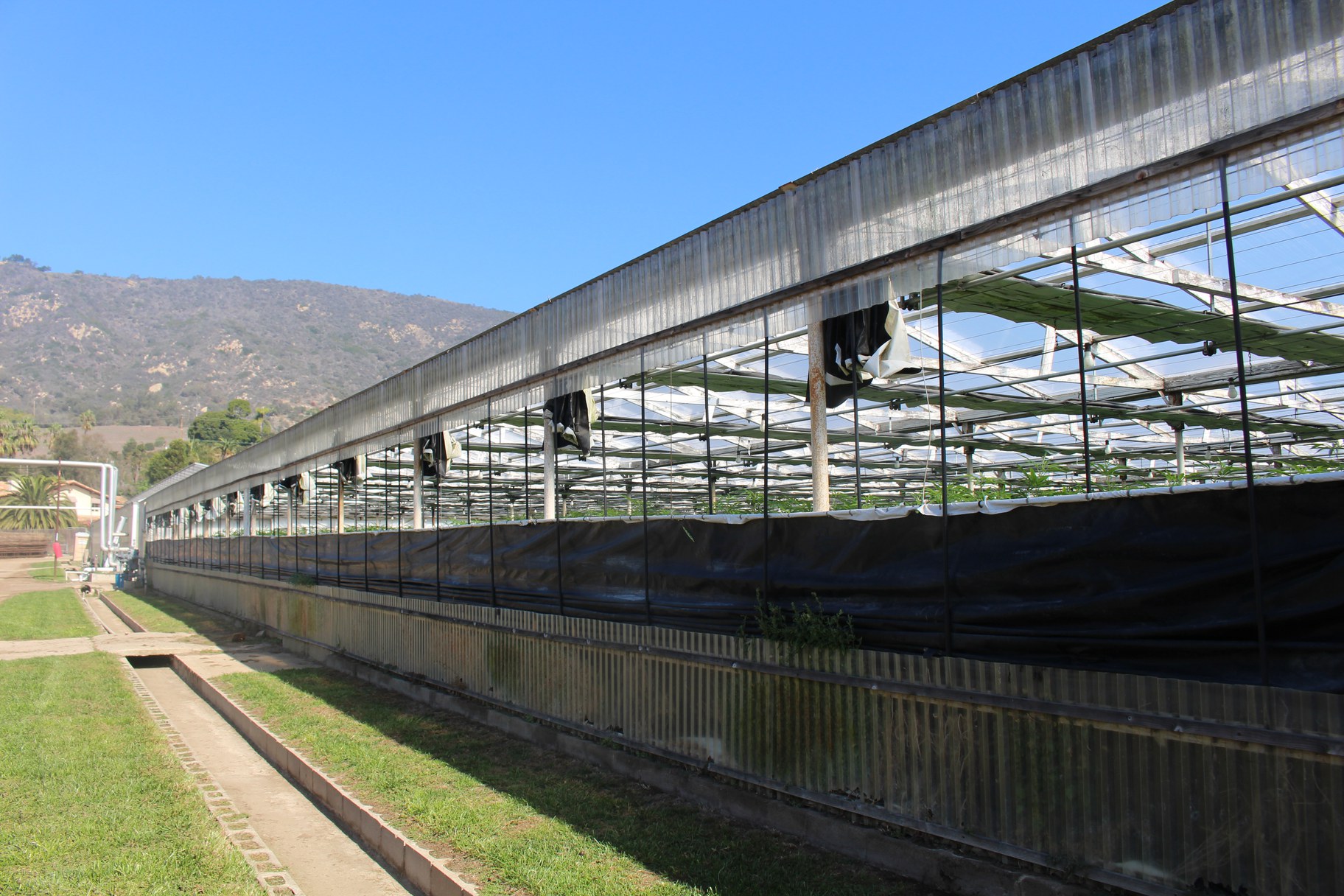 The greenhouses growing cannabis in Carpinteria often have openings in the walls and roof to regulate the temperature, which makes controlling the smell tricky. Photo by Kathryn Barnes/KCRW.

Installing odor abatement technology like this one has gone a long way in making Carpinteria less stinky. But the problem persists.

According to the Santa Barbara County Planning and Development Department, Carpinteria residents have filed 959 odor complaints from September 2020 to September 2021, which comes out to roughly two and a half complaints a day. And due to the way the county ordinance was written, those complaints go unresolved.

“There has not yet been an enforcement because of odor. Not in five years,” says Rob Salomon, a board member of the Santa Barbara County Coalition for Responsible Cannabis.

His nonprofit recently went from suing cannabis growers to trying to work alongside them. In August, the coalition signed an agreement with its former adversary, CARP Growers, an interest group that represents the owners of 23 cannabis projects (which make up the large majority of grows in Carpinteria).

Unlike the county ordinance, this agreement includes a rapid response to odor complaints. Under the new plan, a resident can make a complaint to CARP Growers, who will then pinpoint where the smell is coming from. If the culprit is one of their member farms, that owner must make changes to their odor abatement system or risk getting kicked out of the membership group.

If the growers hold up their end of the deal, the coalition agrees not to oppose or appeal any more of their projects. 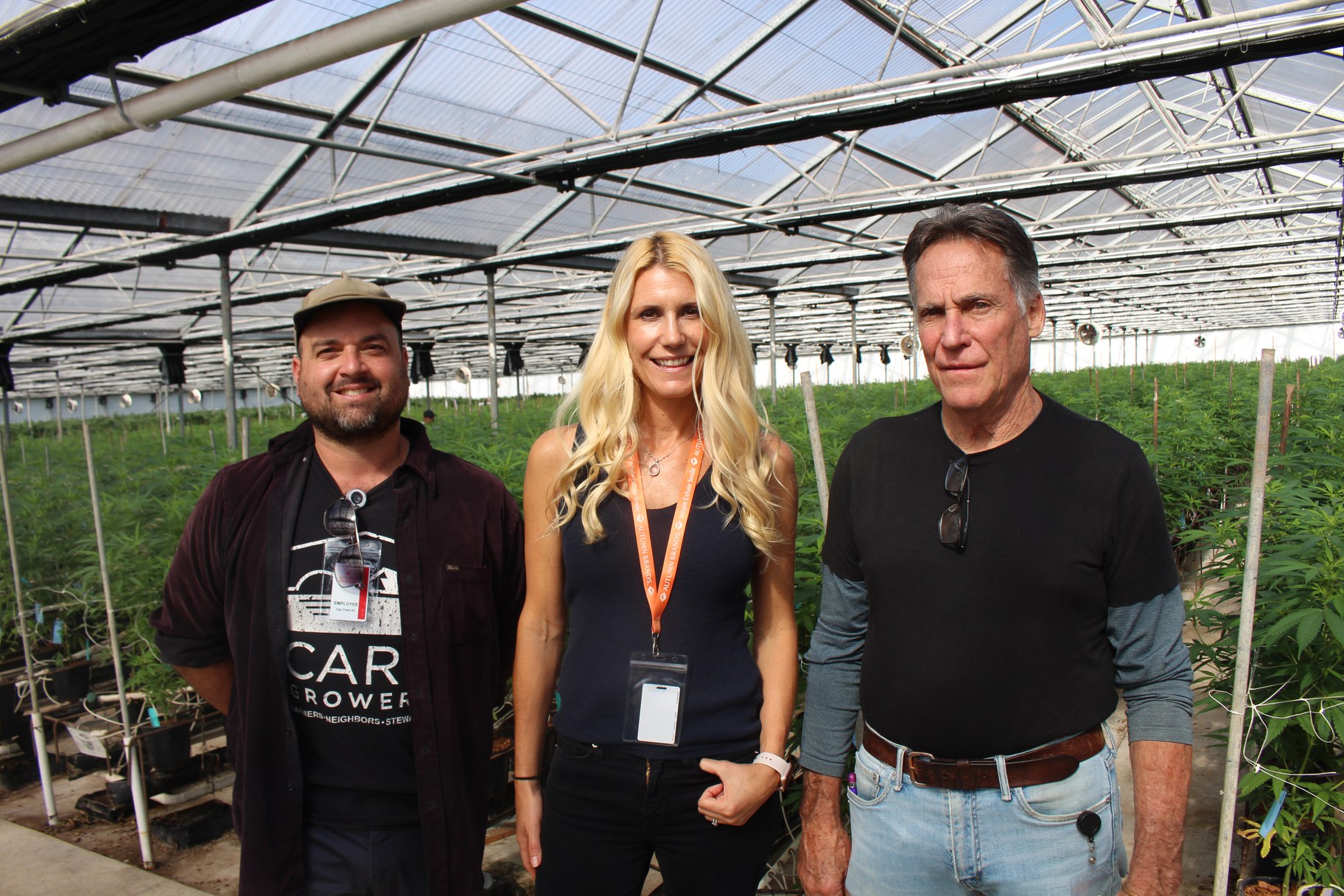 (L to R): Peter Dugre represents CARP Growers, Autumn Shelton runs Autumn Brands and is a member of CARP Growers, and Rob Salomon is a Carpinteria resident and board member at the Santa Barbara County Coalition for Responsible Cannabis. Photo by Kathryn Barnes/KCRW.

This is an example of two opposing groups joining forces to cut out the middleman — in this case, the slow-moving bureaucracy of county government.

But not all locals are confident this agreement will change things. For one, there has been no public outreach beyond a press release. No one’s quite sure what number to call, or why this process is any better than making a complaint with the county. Secondly, the agreement calls for wind monitoring stations meant to identify each smell complaint, but those aren’t up and running yet. And thirdly, new carbon scrubbing technology that may work better than vapor for eliminating odors is caught up in the supply chain kink.

“I applaud the intent behind it. At the end of the day, the proof will be in the pudding, so to speak,” says Maureen Claffey, whose family owns an avocado orchard next door to a cannabis farm represented by CARP Growers, which she says still stinks.

She’s fed up with the lack of enforcement on the side of the county, just like Salomon, but doesn’t think this agreement has any real teeth, either. In fact, she sees this kumbaya moment as a publicity stunt crafted by deep-pocketed cannabis growers.

“I feel like the public only has a short attention span. And if they see this PR machine spinning this good news, they think the problem has been solved. And they're walking away. But at the end of the day, nothing has really improved,” she says. 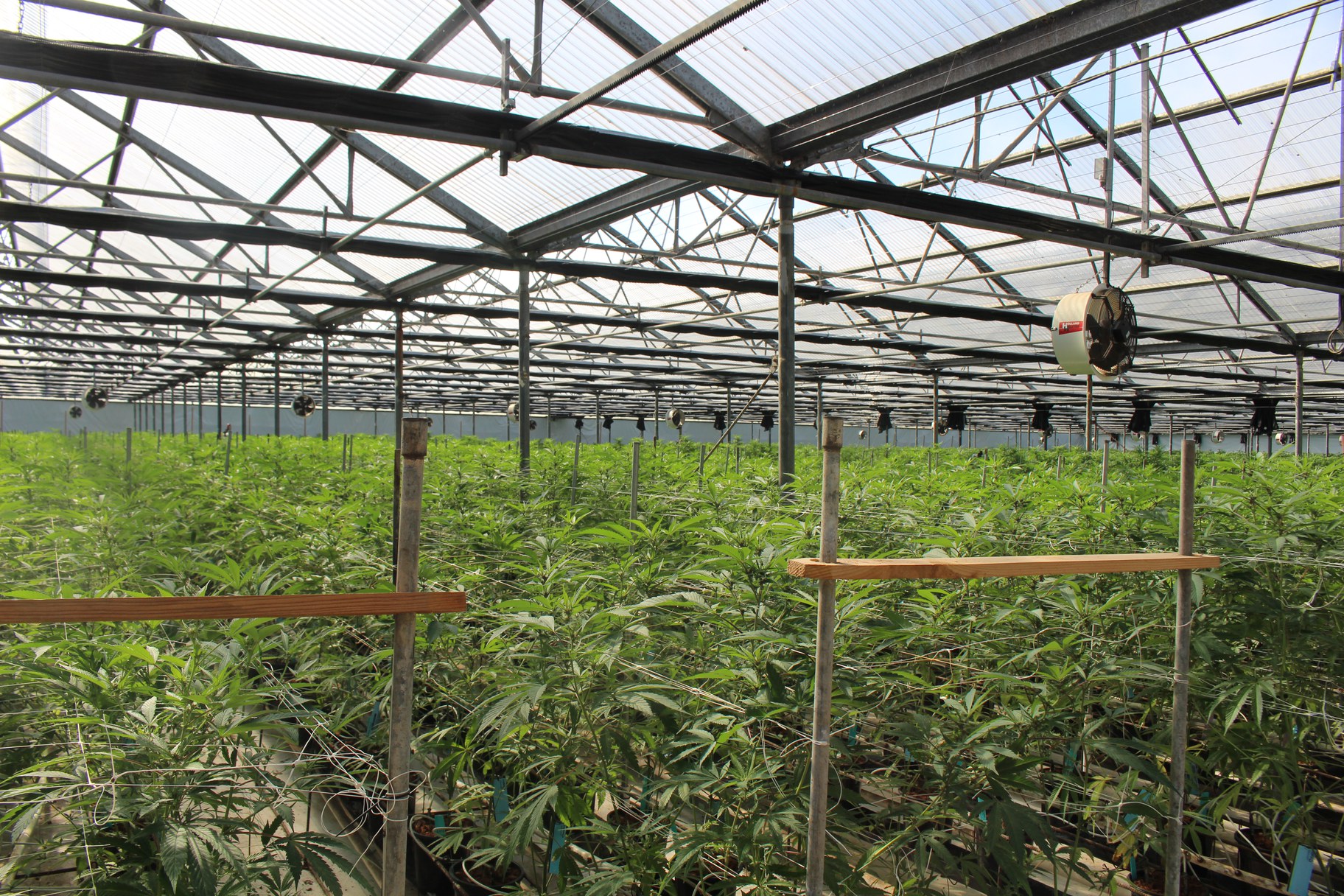 This is one of several greenhouses owned by Autumn Brands. Photo by Kathryn Barnes/KCRW.

Claffey has spoken up about the smell and other issues at county and school board meetings, calling the vapor technology toxic and criticizing the school district for taking what she calls bribes from growers. She’s made enemies through her comments.

“I've been trashed on Facebook. I've had friends tell me my daughter can't play with their daughter anymore because of my beliefs on this. When I was on the school board, I was massively attacked,” she says.

It got to the point where she and her family decided to move off their farm.

“Our solution was to leave,” she says. “We left Carpinteria, we left the school district. I just didn't feel safe.”

So, after five years, millions of dollars worth of smell abatement technology, and more than 1,000 complaints from residents, Carpinteria still hasn’t found a way to live peacefully with the greenhouses that make the city a marijuana powerhouse.

But Shelton and Salomon are hopeful. They say most growers are committed to working with residents, responding to complaints in a timely manner, and testing the latest smell abatement technology.

“We will definitely have this solved,” says Shelton, before another five years pass by.

The smell of freshly-grown cannabis surrounds specific parts of Carpinteria. The county isn’t doing much, so some growers and fed-up residents decided to put their heads...

Netflix's “Gentefied,” about gentrification’s real-world implications in Boyle Heights, releases its second season on November 10. KCRW speaks with two of the show’s creators.