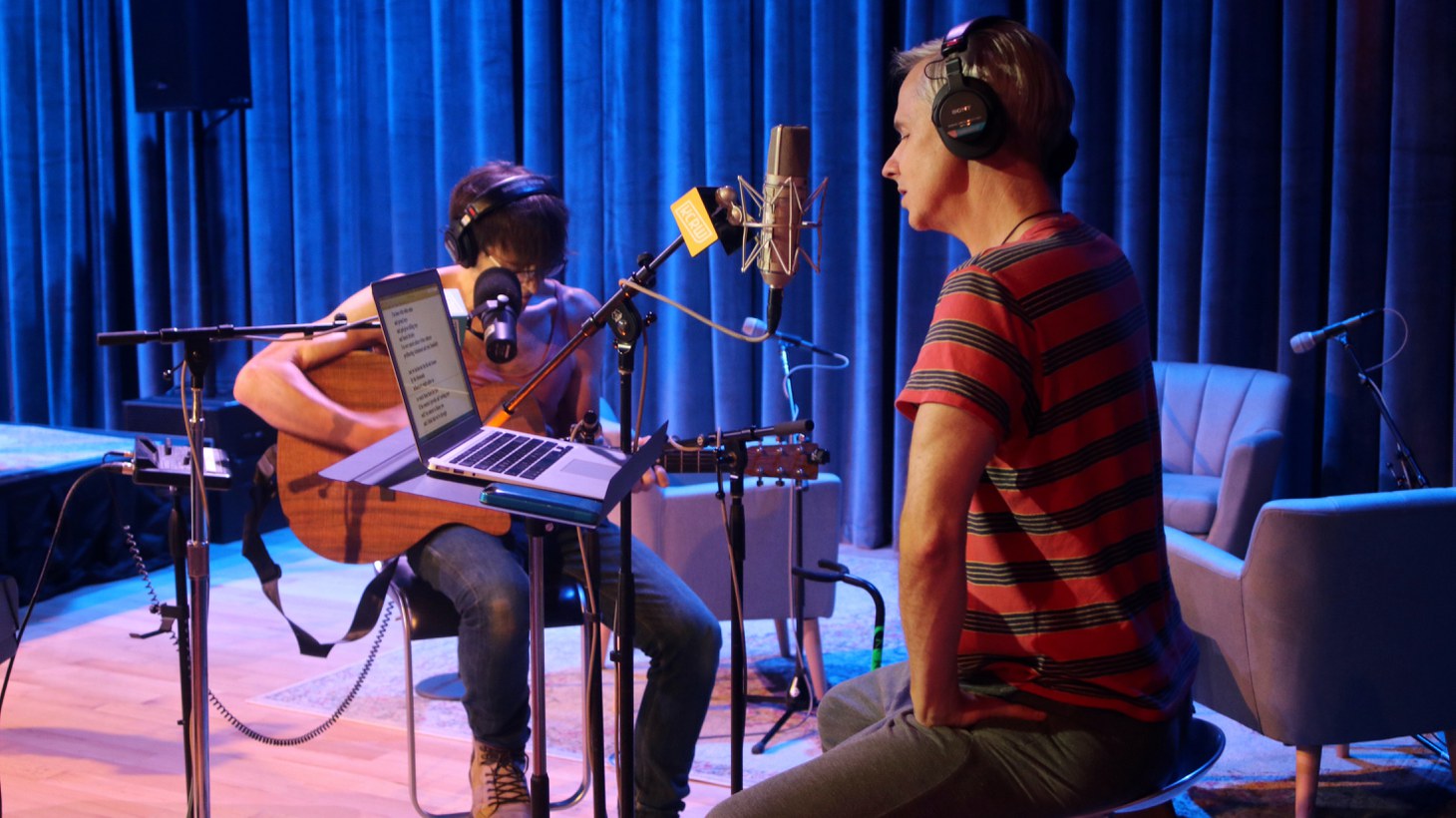 John Cameron Mitchell sings and Stephen Trask plays guitar during the song “Nation of One” at KCRW. Photo by Giuliana Mayo.

“Hedwig and the Angry Inch,” a musical about a queer East German rock star, originated in the mid 1990s in small New York City clubs, then moved to Off-Broadway, the silver screen, and eventually Broadway. It was a messy, girly boy-becomes-girl story of despair, love, codependency, and redemption.

John Cameron Mitchell and Stephen Trask, the musical’s creators, will perform songs from the show and tell stories about its making this weekend at USC’s Bovard Auditorium.

Mitchell tells KCRW that the duo met on a flight in 1989, then started working together after he came up with an idea for a rock show that felt like a Broadway musical.

They drew inspiration from their childhood stories, including one about Mitchell’s baby brother’s babysitter.

Mitchell says he also had Ancient Greek stories in mind, including Plato’s Symposium and Aristophanes’ speech on the origin of love.

At the time, Mitchell and Trask regularly visited a nightclub called Squeezebox, where a different drag queen performed every week. Trask says aspects of those personalities made their way into the Hedwig character.

The journey to success

Mitchell says it took some time for “Hedwig” to catch America’s attention.

“Through the whole process, we were always clinging by our little press-on [nails]. Off-Broadway, we hung on like a bad cold. There was no money. It was like we just clung to life. There was no possibility of Broadway because it was too queer and too punk for Broadway at that time.”

However, once the show was adapted into a film, it found new life. Mitchell describes that era as the 1990’s golden age of cinema, and he says a bidding war ensued for the musical, which New Line Cinema won.

“They gathered together to make this the way it should have been done while they're doing ‘Lord of the Rings.’ They didn't short shrift us. We got the screen and lots of promotion.”

The movie flopped, but not its DVD release.

The show also became popular when theater companies nationwide adapted it, Trask says. The most notable was a Seattle-based production starring Nick Garrison.

“Nick played Hedwig a number of times in Seattle and was the first outside of New York successful production. That was the model for how we could be successful. And he really helped us launch this as a part of the American repertoire,” Trask explains.

Trask points out that while much of “Hedwig” is about a character who’s on a gender-based journey of self-discovery, it’s possible for any viewer to see themselves reflected in the story.

“A lot of it is just dealing, honestly, with your own feelings and your own issues in your life. And so a lot of people find meaning in the show,” he says.

He tells the story of a woman who traveled from El Salvador to California decades ago. Today, she’s a school teacher “who starts every day listening to Hedwig and she says, ‘I am Hedwig.’ That's her story.” 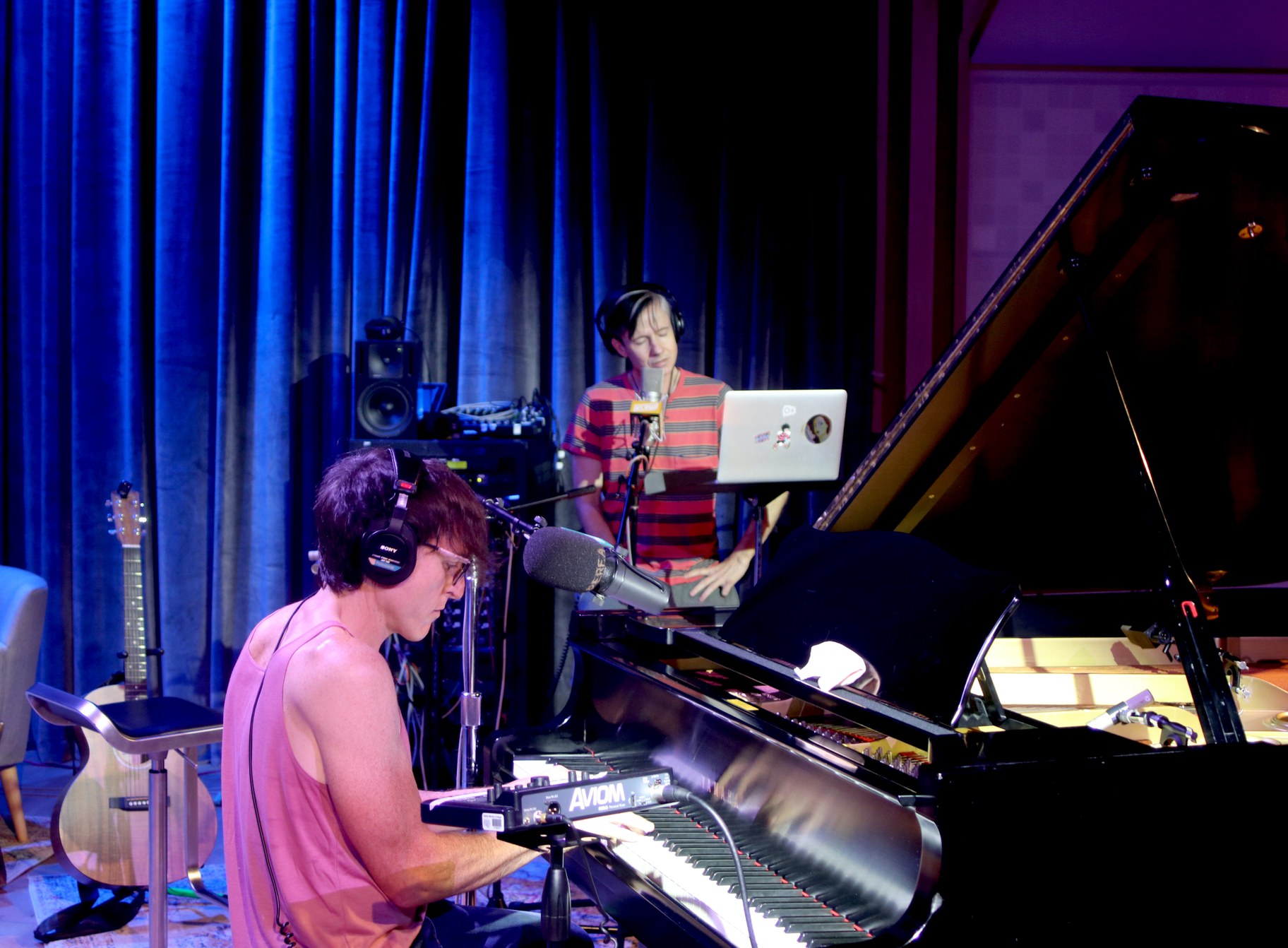 Trask adds that new generations of viewers are also discovering “Hedwig,” and they’re able to express the feelings he was trying to convey in the music more clearly than he could.

“I find that in some ways, the community of people that are influenced by the show are coming back and influencing me and enriching my life and helping me understand my own self better,” Trask says.

The window to protect Big Bear from wildfire is shrinking

The U.S. Forest Service knows it needs to set prescribed burns on thousands of acres in Big Bear every year. This year, it's only burned 20.

The musical “Hedwig and the Angry Inch” is about a queer East German rock star. It came out in the 1990s, but new generations are relating to it today.