The Judith and Thomas L. Beckman YOLA Center is a permanent space for the program, which was founded by LA Phil Artistic Director Gustavo Dudamel and based on the El Sistema public music program in his native Venezuela. The center is in a 1965 bank building on South La Brea, and Inglewood Mayor James T. Butts worked with the LA Phil to shepherd it into existence.

“This building was first a Security Pacific Bank, then it was a Burger King. And so now it's transitioned on and been reborn as a cultural anchor for the city,” says Butts.

His YOLA Center is understated and far from the sails of whirling metal at Disney Concert Hall. It was intended to be practical and affordable. The construction cost $14.5 million, out of total project costs of $23.5 million. 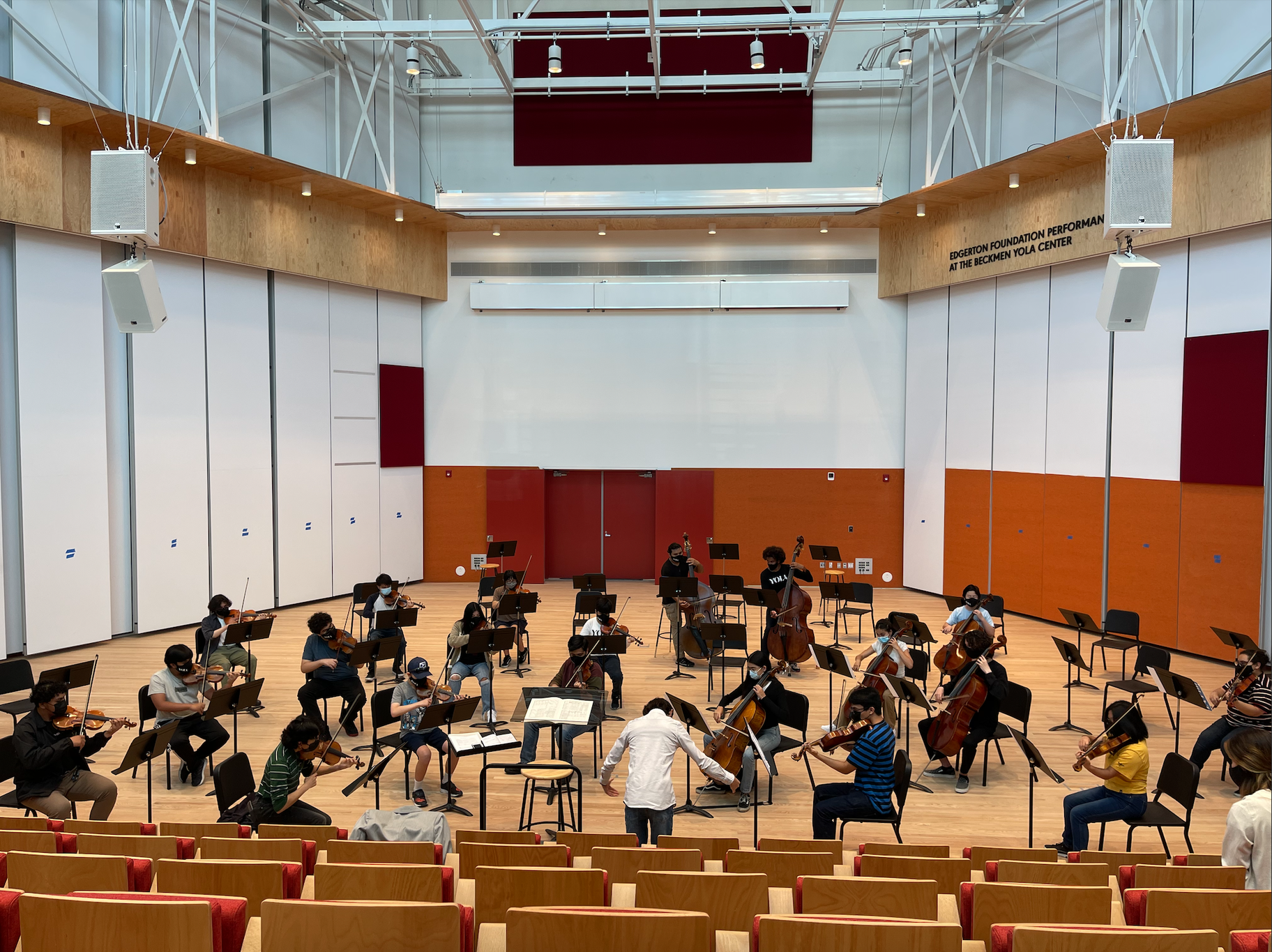 YOLA students practice for the public opening under the command of conductor Enluis Montes Olivar. Photo by Frances Anderton.

To give students and visitors a sense of grandeur, Gehry partnered with the consulting company Nagata Acoustics to drop the building’s floor and raise the ceiling. The performance space is now 45 feet high.

A band of glass windows (clerestories) brings in natural light. The space, which can be subdivided into two rehearsal spaces, has wooden floors, deep-raked seating, and white panels. The design team kept the glass wall and doors on the South La Brea facade as it created a sense of openness.

Dalanie Harris, an Inglewood resident who spent 10 years at YOLA, watched the new space get built. She tells KCRW, “Opening it up visually was really cool, so that it gets people curious about what's going on and how to get involved and be a part of it.” 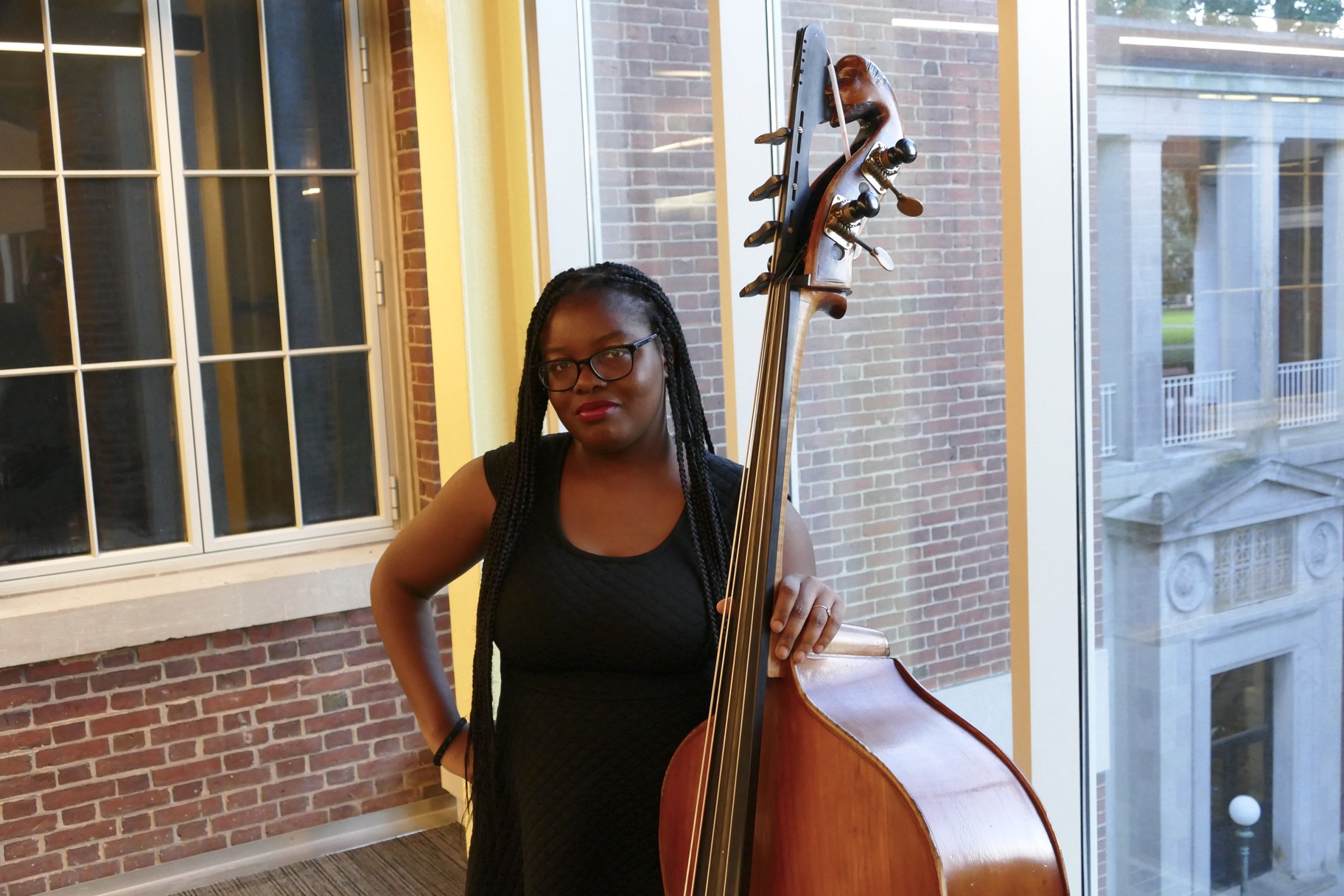 The open facade could be read as a metaphor for YOLA’s place in Inglewood.

Butts tells KCRW that YOLA Center will offer 160 slots in its first year, which they hope will go to Inglewood residents.  The center will also help revive the downtown area, where the main thoroughfare (Market Street) suffered when the Lakers and the Kings left the Forum, and the racetrack closed for good.

“Now this is one of those iconic uses and buildings that will help us to activate Market Street,” he says.

Market Street is one block from the YOLA Center, which is also near the new Metro site, the high school, and the middle school. The center is right by City Hall. The idea is that YOLA can serve as an anchor along with other investments in downtown, including affordable housing.

YOLA opens just as the classical music world, like many other established cultural institutions, is trying to diversify its programming, its players, and its image as a hidebound European import.

YOLA alumna Harris now works at Seattle Symphony and hosts “Classically Black,” a podcast that focuses on young Black classical musicians and composers. She sees YOLA as a venue for expanding the range of classical music and as a hub for her native city.

The school will host a public opening once COVID restrictions ease, and plans to open the space to other Inglewood-based artists.

“There's already a lot of talent and incredible people already creating things in Inglewood, so it's just nice to have sort of a space to serve as a connection between artists and a resource for them,” says Harris.

Prospective students can fill out this YOLA interest form.

Scientists and biologists are investigating why hundreds of gray whales are dying. Every year, for thousands of years, the giant sea mammals migrate between their feeding...

The Huntington Beach City Council has appointed Rhonda Bolton, out of more than 100 candidates, to take the seat left vacant by mixed martial artist Tito Ortiz, who lasted...