The book cover image of “A Fire Story.” Image by Brian Fies.

Around 1:30 am on October 9, 2017, cartoonist Brian Fies and his wife Karen were forced to evacuate their home near Santa Rosa. A massive wildfire was coming. Within an hour, their neighborhood was flattened.

The only things they grabbed with them were some clothes, their pets, and a few mementos. They lost the rest.

Fies told his story in a web comic that went viral and led to a short Emmy-winning video.

He tells Press Play that comics excel at metaphor and symbolism, and they can reveal emotions in ways that other media do not.

Recalling the night of the fire, Fies says his wife woke up when the power went out, then looked out the window to see an orange glow in the sky and smoke blowing sideways. In just two to three hours, a wildfire that started 20 miles away traveled 60 mph, and was nearly on their doorstep, Fies says. They got no warning from city officials.

They went to his wife’s office, where she worked as the director of Sonoma County Human Services. She immediately worked on an emergency response, helping fire victims.

She soon learned she and her husband were victims too. When Fies returned to his neighborhood the next morning, he saw that his house was gone.

“I walked about two or three miles through neighborhoods that were intact and looked fine, and convinced me that my neighborhood would be intact and be fine. Turned a little corner, and in front of me, I just saw a sterile plane that looked like a nuclear bomb had hit it. Just nothing left but smoking debris,” Fies says. “It was very disorienting. There were no landmarks left. No buildings. No trees. There were street signs, but they almost seemed to be in the wrong place just because they were so out of context. I almost had trouble finding my own house in a neighborhood that I lived in for 17 years. ” 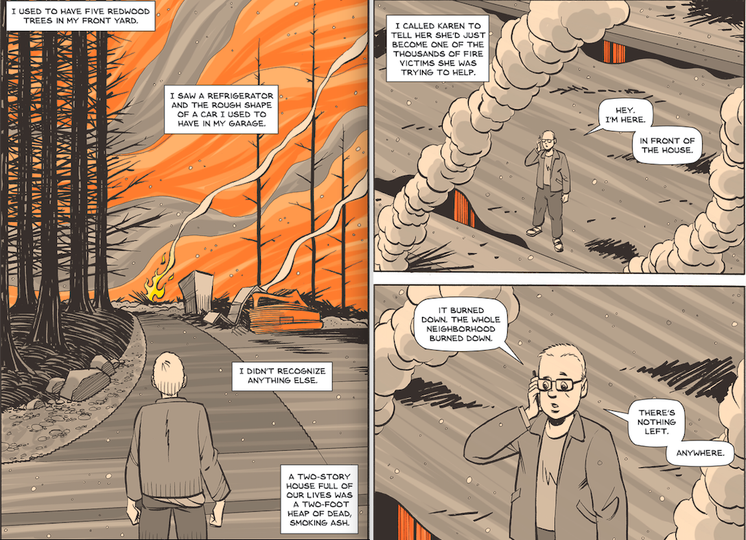 He then compared their lives to orbiting a black hole: 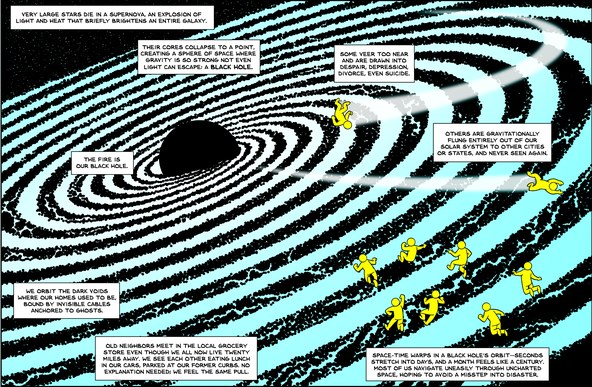 Thirteen days after the fire, after the EPA searched all the properties in the neighborhood, authorities allowed Fies and his wife to return to their home. They put on hazardous waste suits, dust masks, and latex gloves. Going through the waste, they managed to find some belongings: 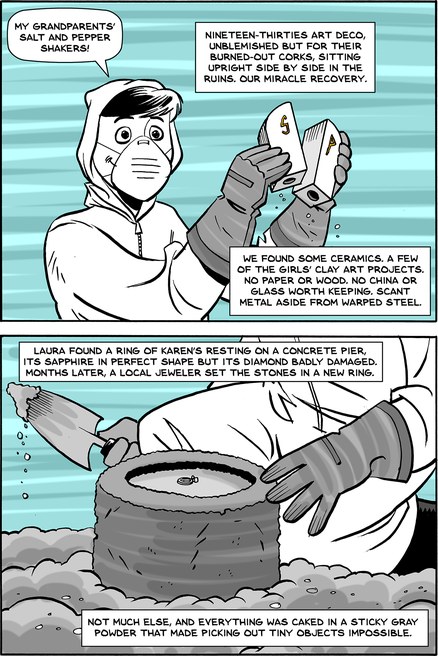 Fies says it was a miracle that they found those shakers, which were made in the 1920s or ‘30s. They were sitting side-by-side upright where the kitchen used to be.

Fies says they found and saved four big plastic bins worth of stuff, which they won’t go through until they get their new house.

“I suspect we'll end up probably throwing out 95 percent of it just because it won't be worth keeping, and it won't mean what it meant to us before,” says Fies. “What it meant to us right after the fire was home. Each insignificant thing becomes almost a holy relic. I didn't care about this butter dish before, but now it's the only butter dish I have. And it becomes almost a sacred object. So we kept things like that.” 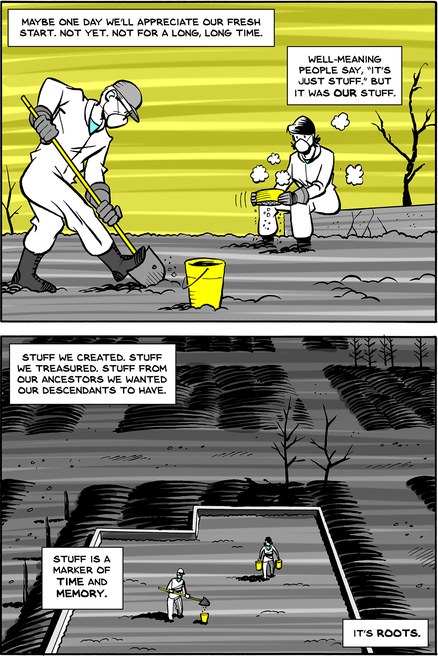 Fies says he plans to have a shrine to put these things. “I think it's not a memorial to the event. It's a memorial to the life you used to have… As long as I live, as long as my kids live, our lives will always be divided into ‘before the fire’ and ‘after the fire.’”

Right now, they are rebuilding on the exact spot where their house used to be. Fies says if they’re lucky, they’ll have a new home in less than two years.

“We love Sonoma County. We love our piece of Sonoma County. It was home. Even after you destroy the building, even after you scrape it off the lot, and all you've got is a fifth of an acre of dirt, it's still home,” he says. “I used to go back, and just eat lunch sitting on the stumps of my redwood trees in my front yard. It was roots for us… It was important to my wife and I to rebuild because we just really couldn't think of anywhere we'd rather be.”

His graphic novel ends with a sense of renewal, but also an acknowledgment that there's no closure. “Just because sometimes you can make something positive out of this doesn't mean that there's anything -- not one damn thing good about it.” ‘A Fire Story:’ A graphic memoir about losing everything in a Northern California wildfire

What could Trump’s former lawyer Michael Cohen reveal in his testimony on Capitol Hill?

Michael Cohen is testifying today behind closed doors at the Senate Intelligence Committee. This kicks off three days of some of the most highly anticipated hearings related...

Out on bail, what’s next for R. Kelly as he faces multiple counts of sexual assault with minors?

R&B singer R. Kelly is out on bail. He was arrested last week on sexual assault charges involving one woman and three underage girls over a dozen years.

The Republican party has long supported the death penalty. But now politicians in red states like Wyoming, Kansas, and Kentucky are sponsoring bills to end it. Conservative...

What to watch on TV for Black History Month

Around 1:30 am on October 9, 2017, cartoonist Brian Fies and his wife Karen were forced to evacuate their home near Santa Rosa. A massive wildfire was coming. Within an...