“There were 500 men, and it quickly whittled down to 60. Everyone was starving and dying, and they literally began eating each other. It's a nightmare. It is a dystopian horror story,” podcast host Avery Trufeman says about the origin of the Jamestown colony in Virginia. Photo by Shutterstock

Settlers from Plymouth England shared an autumn feast with the Wampanoag tribe in Massachusetts 400 years ago — a tradition we’ve come to call Thanksgiving. School teachers tell it as a warm and fuzzy moment with two cultures working together for the common good. It’s an overly simplistic and rosy myth, but it’s how we imagine the beginning of America.

The true origin story — which is more complicated and darker — happened many years earlier in Jamestown, Virginia. Avery Trufelman, host of the podcast “Nice Try,” has devoted an entire episode to the Jamestown settlement.

She tells Press Play that Spain wanted to conquer the New World and “outsourced the project of colonialism” to the Virginia Company of London, which had to look successful to their shareholders and investors. But the crew that was sent over were wholly unprepared and didn’t know how to fend for themselves.

She says the Virginia Company never admitted that anything was wrong, and kept sending men over until “starving time” happened in 1609.

“There were 500 men, and it quickly whittled down to 60. Everyone was starving and dying, and they literally began eating each other. It's a nightmare. It is a dystopian horror story,” she explains.

That trauma led to a feeling of separation from the English back in Europe and created conflict between the settlers and the Indigenous people of the area: “That was the birth of the colonial mindset to be like, ‘We are not Englishmen. Those people over there on the other side of the ocean have no idea what we're going through. And it also created a lot of ill will. They lashed out at the Powhatan. It really set a standard for what European-Indigenous interactions would be in the colonies going forward.”

The men started killing the Native Americans who had been helping and feeding them, and destroying themselves in the process. The Indigenous people then relegated them to a fort.

“T​he surrounding tribes were like, ‘Listen, we tried to take care of you, you're lashing out, you're killing us, and you only seem to be growing in number. No more. We're containing this thing. If you leave your fort, we will kill you.’ … Whenever the Powhatan would kill a European settler, they would leave his body out by the fort and stuff his mouth with bread. ‘You wanted food? Here it is.’” explains Trufelman.

Then the Virginia Company sent 300 more men to the colony, as well as a group of leaders from the organization, to help bring order to the chaos. But when they all arrived and saw “cadaverous men licking the blood off of their dying colleagues, boiling their belts and sucking them,” the leaders decided to go back to England. But enroute, another boat from the Virginia Company intercepted them. “This boat is like, ‘No, no, no, turn around. We're all going back to Jamestown. You thought this nightmare was over?’”

Trufelman says that sowed the seeds for what would be the “Anglo-Powhatan Wars” that lasted throughout the first half of the 17th century.

Trufelman says Pocahontas was 10 years old when she met John Smith, a grown man who led the first iteration of the Jamestown settlement.

“He was a really good diplomat. He learned the local language. He was really competent. And so you could argue that that's also the seed of an American identity, that this was going to be a new settlement, [where] leadership was not going to be determined by who your father was, or how much land you owned. This was going to be a more democratic exercise in leadership. And so John Smith epitomizes that, and they have an alliance.” 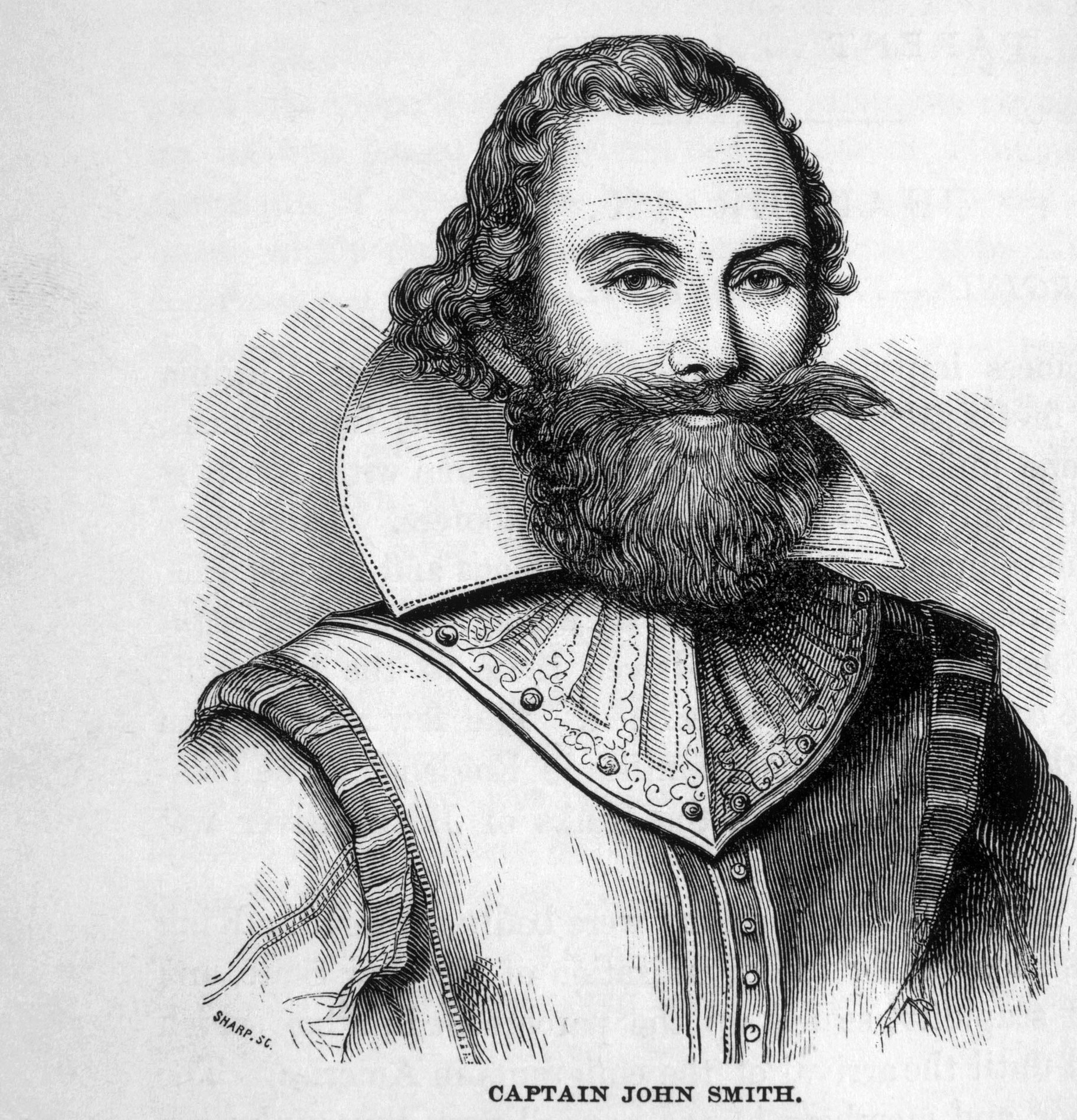 A portrait shows Captain John Smith, circa 1580-1631. Photo by Shutterstock.

However, Trufelman says Smith’s rule over Jamestown was brief because he got injured and returned to England.

Renewed chaos ensued, and after the start of the Anglo-Powhatan Wars, Pocahontas became a prisoner who was forced to go to England, where she married a man named John Rolfe, converted to Christianity, changed her name to Rebecca Rolfe, and lived there until her death.

“In the U.K., she was considered a princess. It was a way of anglicizing and white-washing where she had come from. ‘She's here, she's one of us, she converted to Christianity. It's all good.’ She never wrote down her own story. And we just know a lot about her from the accounts of others,” Trufelman explains. 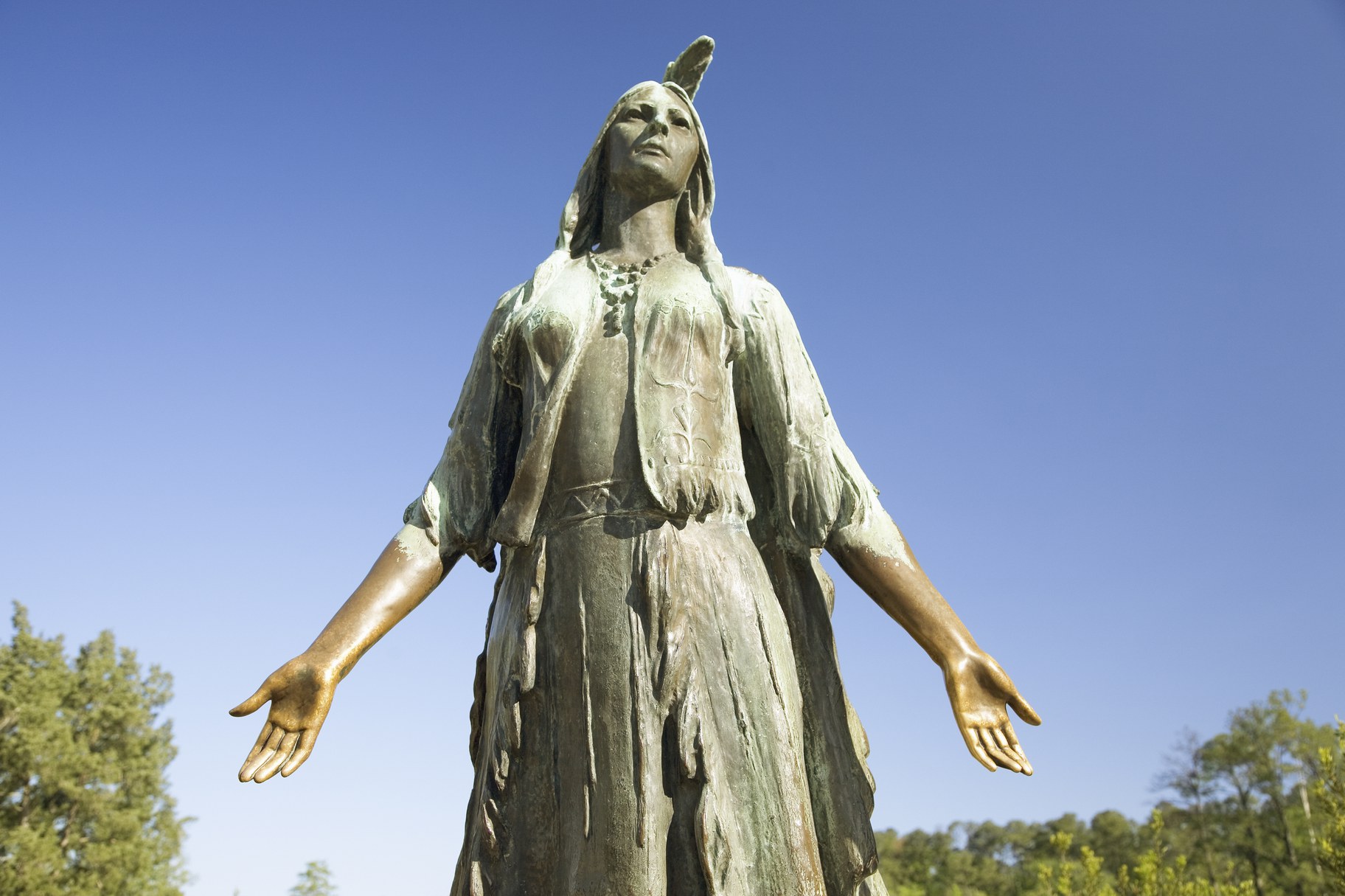 A Pocahontas statue, by William Ordway Partridge, was erected in 1922. Photo by Shutterstock.

Jamestown became a foundation for migration to the New World, due in part to a book Smith wrote about his experiences establishing Jamestown, Trufelman says.

The inability to tell the truth

Trufelman says that the story of Jamestown epitomizes the modern-day difficulty of coming to terms with the brutal history of Thanksgiving.

Travis McMichael, his father Gregory McMichael, and their neighbor William Bryan were deemed guilty today for murdering Ahmaud Arbery, a Black 25-year-old, when he was out...

Settlers from Plymouth England shared an autumn feast with the Wampanoag tribe in Massachusetts 400 years ago — a tradition we’ve come to call Thanksgiving.

‘Encanto’ is fun for whole family, with songs from Lin-Manuel Miranda as he’s in ‘Moana mode,’ says critic

Easy last-minute Thanksgiving: Sandwich buffet with hardly-used condiments and any veggies you have

What would your version be of a Thanksgiving that was less work and maybe last minute?