In East LA, young women of color have formed a cycling group called Ovarian Psycos. Many of them are trying to recover from trauma and abuse. The collective has become a safe space for them to support each other. But they’ve been criticized for being too aggressive and even violent. They’re the subject of a new documentary called “Ovarian Psycos,” airing on PBS on March 27th. 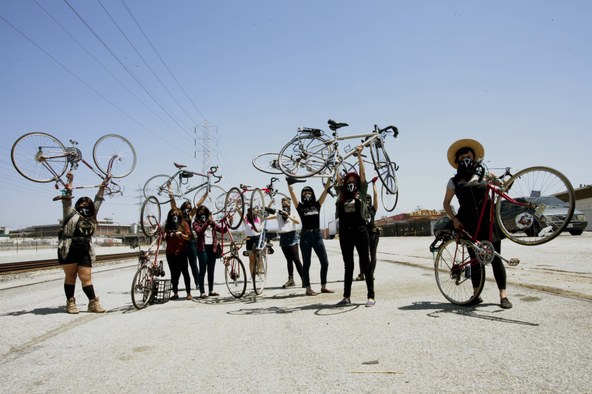 The Ovarian Psycos in East LA (Photo by Michael Rains) As Attorney General aims to punish sanctuary cities, how might LA be affected?

Attorney General Jeff Sessions announced sanctions for sanctuary cities today. We find out what that means for Los Angeles, which the mayor says isn’t a sanctuary city, but...

California stands up to Trump on air pollution

The Trump administration has already started undoing fuel efficiency standards for cars. But California is pushing back. The Air Resources Board has voted to create tougher...

In the last year and a half, Canada has admitted more than 40,000 Syrian refugees. But that has also stirred up the far right -- especially in Quebec. Now, some far right...

In East LA, young women of color have formed a cycling group called Ovarian Psycos. Many of them are trying to recover from trauma and abuse. The collective has become a...

NFL team owners gave approval today for the Oakland Raiders to move to Vegas. It was a landslide – 31 out of 32 owners voted in favor of the move. What will it mean for the...