Fashion icon Betsey Johnson on being pretty, punk, nothing in the middle Betsey Johnson talks to KCRW about her pretty and punk style, and why she ends fashion shows by doing a cartwheel and splits. Photo credit: Ramona Rosales

Betsey Johnson has been a staple of the fashion world for more than 50 years. Her style is loud, bold, feminine. It’s punk rock, like a high-fashion circus. Hot pinks and jet blacks are everywhere. There are floral patterns, animal prints, rhinestones, crystals.

“When we get back in action, everything will be survival clothing — cheap. You know, one size fits practically all. And I think I could have a good shot at relaunching the fun, the craziness, the patterns, the drawings. … People will need the fun,” she tells KCRW.

Johnson began her fashion career with a simple design. “I basically did a t-shirt and made it flip out,” she says.

She says she grew up in leotards, so she was into the stretchy, comfortable material that people could dance in. “And then I added dancing elements like tutu skirts and ballerina lengths. And ruffles and tulle and hot pink and sequins. I love to be described as really far-out flippy crazy.”

Johnson says that about five or six years ago, her style became clear. “I do pretty. Or I do punk. Nothing in the middle,” she says.

“You either look and feel like a flower garden or you look rock and roll, punky, edgy. And it worked because stripes are very wearable and beautiful. Flower prints are very wearable. I've just stuck to my same thing for like 35, 40, 50 years now,” she says.

Johnson says she became “a leader of the punk thing and the girly thing.”

“I don't think there's been anything else since,” she adds. 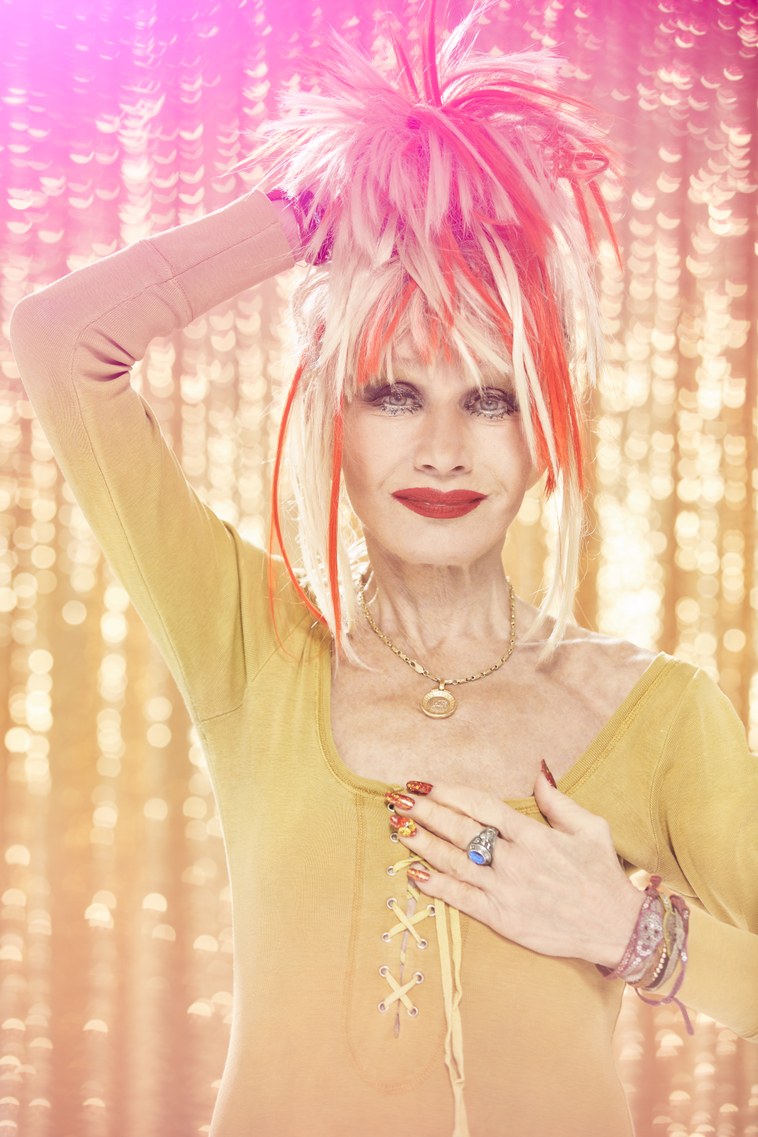 “I do pretty. Or I do punk. Nothing in the middle,” says Betsey Johnson. Photo credit: Ramona Rosales

At the end of every fashion show, Johnson struts down the runway and does a cartwheel and splits.

She says she got the idea in high school. “I said a split is so easy, a cartwheel is so fun and easy, that no matter what I'm going to do when I grow up, I always want to be able to do a cartwheel and splits.”

Johnson says she was an acrobat, so she never forgot how to do those things.

She recalls that a few years ago, after a fashion show, she went on the runway to bow, wave, jump up and down. “I just happened to jump into a cartwheel and a split, and the audience went berserk. And I had so much fun doing it that I kept on doing it. And it just became a happy ending at all my shows, and everybody loved it, and it was a sign of good health.” 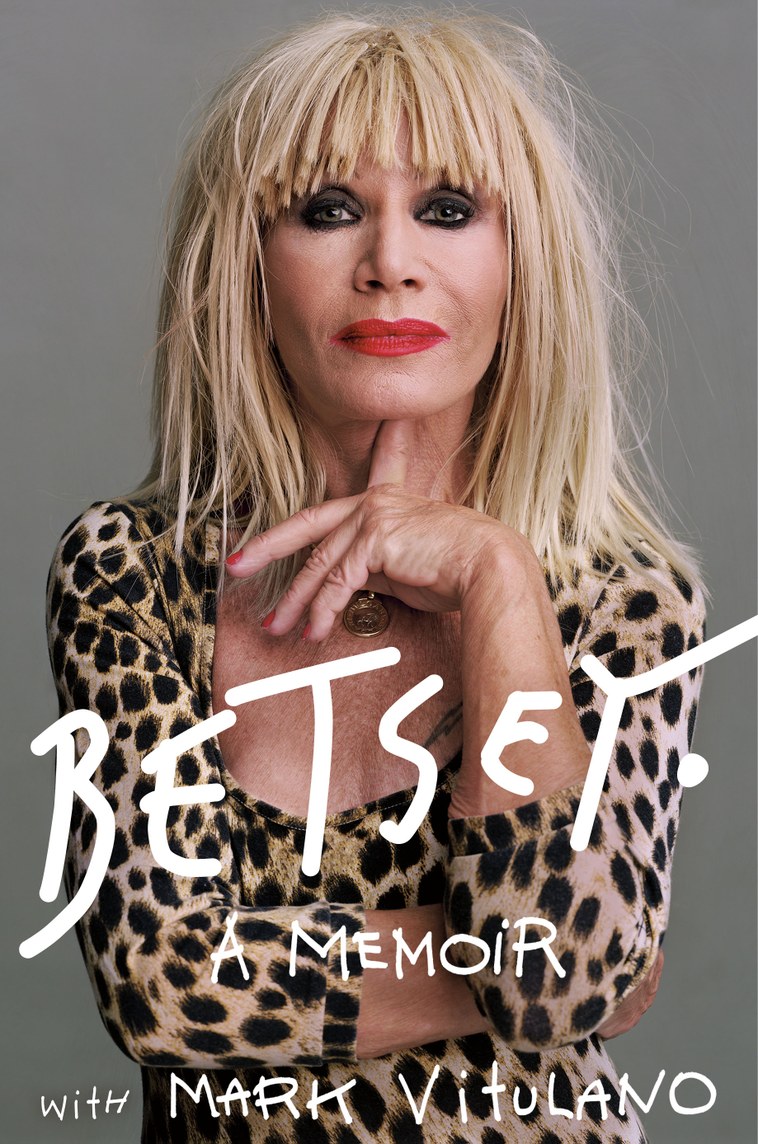 Betsey Johnson is out with a new memoir. Photo credit: Penguin Random House

Johnson is now out with a new memoir titled “Betsey.” Read an excerpt:

An excerpt from "From BETSEY: A Memoir" by Betsey Johnson

I could have written this memoir years ago. In fact, I tried to, and it didn’t work out. I don’t think I was ready.

But now I’m at a point in time where I have some perspective and am able to look closely. A point where I finally feel I have the courage to draw back the curtains and see what’s behind them; the good, the bad, and the hard to look at.

This book is also a way for me to give back; something for the generations of devoted Betsey girls.

Everyone knows me by the cartwheels, the splits, the crazy hair, and the sexy clothes.

But I want people to see there is a real person behind the persona I’ve spent years creating. And also to know that there is a method to my madness, and who knows, maybe learn some life lessons along the way.

So what do you say? Let’s lace up our roller skates and go for a ride!

To go back to the very beginning, I was born on August 10, 1942, in Wethersfield, Connecticut, a small suburb of Hartford. That date put both my sun and moon in the sign of Leo. Now, I don’t take astrology too seriously. I don’t make daily decisions based on charts or planets or any of that. But there’s no denying that from the time I was little, my Leo personality was in full bloom.

From what I’ve heard, the sun in Leo means you go out into the world and you shine. And that behavior was always instinctual to me. I was full of energy and enthusiasm and had my own special kind of appeal that wasn’t at all determined by my looks. I was never the kind of pretty that would make every head turn when I walked into a room. That’s for sure.

Instead, I relied on my bubbly, oddball personality to make my way in the world. I distinctly remember one instance of that from when I was a child. I was home after school. My sister and brother were at opposite ends of the living room, both studiously doing their homework. I walked into the room and out again and back again—the whole time walking on my hands, my feet in the air swaying as I tried to keep my balance. I kept this up for more than thirty minutes until my mother finally toppled me over and said, “Betsey Lee! Stop that!” I looked up at her from the floor confused and said, “I can’t. It’s not perfect yet.” That was my peculiar drive in a nutshell.

As bubbly as I may have been, I was also what my mother called a “worrywart,” which I thought sounded so ugly. But she was right: I would literally lie in bed at night and fret. It wasn’t just the typical monster-under-the-bed situation. I was just an insecure, scared little girl.

I remember I had this irrational fear of dying, which came seemingly from nowhere. My mother would ask me what I was so worried about, and I didn’t know how to answer. What made it all the worse was that I didn’t even know how to talk about it. The fear was very real to me. I couldn’t accept that I was actually going to die in the end—whatever and whenever the end might be. I used to tell my mom: I better not die before Christmas, which was my favorite time of year. My mother, in her own way trying to reassure me, would say, “We are all going to die . . . someday.” I didn’t feel any better. Her response just fueled my anxiety.

If I were to play armchair psychiatrist, I would have to say that World War II had something to do with my dread. The war was in full swing when I was born. I do remember hearing war reports on the radio as a child and seeing scary pictures in the newspaper that I didn’t quite understand.

The war didn’t directly threaten our safe little corner of Connecticut. But I guess the specter of some kind of Nazi bogeyman permeated the collective consciousness in a way that even little children couldn’t escape it. My father would tell us stories of his role during the conflict. He was what was known as a “blackout man,” responsible for going around the neighborhood and making sure everyone had their blackout shades down after sunset. I found it creepy that my dad—who was sweet, kind, and so full of life—had to make sure everyone in town was sealed into darkness every night.

I could also attribute my anxiety to the moon-in-Leo part of my nature. And by that I mean, when my Leo moon would kick in, oh crumb! It would come along with a pail of water to pour all over my sunny-side up. From very early on I understood that I had a choice: did I want to choose the light or the dark? I wanted the happiness and sunshine. I usually found it easy enough to shake off the dark and get back into the light.

Wethersfield was at that time a very small, tight-knit community—the type of place that had neighborhood vegetable gardens and where everyone knew everyone else. Women would get together once a week for sewing bees. My mother actually hated sewing but she joined in to be sociable . . . and to learn to sew clothes for her children. It was cheaper for her to make our clothes than to go out to a department store to buy them.

Every year she’d make matching back-to-school dresses for me and my sister. They were always plaid and had little puff sleeves and sashes and bows. She later also sewed all of my dancing costumes, and I started to help. I had no idea that this would become my life’s work. Back then it was just a means to an end. I don’t remember deriving any great pleasure from cutting and sewing other than the joy of spending time alone with my mom.

I don’t know whether my family would have been considered working class or lower middle class. Whatever we were, I just know we weren’t fancy. We lived in the classic little house with the white picket fence. Very quaint, very country. Looking back, I see my childhood as very comforting and traditional, a series of endless, sunny summers followed by winters that looked like Christmas cards or a Norman Rockwell painting. We were apple pie to the max.

Hotels for unhoused people during COVID-19

California struck a face mask deal with a Chinese company. Where are those masks?

Some of the governor’s spending is now coming under scrutiny, especially a deal he struck with Chinese car company BYD to buy masks.

There are fears that COVID-19 could spread easily in homeless encampments.

CSA produce boxes: Where to find them, how to use them

Small farms across Southern California are still growing and harvesting produce during the COVID-19 pandemic. Now they are selling produce boxes directly to customers or...

Small Southern California farms have been hit hard by COVID-19. Two local farmers tell KCRW about the demand they're seeing for produce now, and how they're getting by.

Fashion icon Betsey Johnson on being pretty, punk, nothing in the middle

“When we get back in action, everything will be survival clothing — cheap. You know, one size fits practically all. And I think I could have a good shot at relaunching the...