Annie Murphy on ‘Schitt’s Creek’ success, and how Alexis Rose grows from ditzy to deep Annie Murphy is a breakout star in the Canadian sitcom “Schitt’s Creek,” which is in its sixth and final season, and has gained a cult-like following. The show follows the Rose family after they suddenly lose their massive wealth, then resort to living in a motel at Schitt’s Creek, the town the dad previously bought as a joke. Murphy plays Alexis Rose, the spoiled daughter in the family.

“The family that ends up living together in a motel room -- before that was never together at all. So the show is kind of about this family learning to be a family, and learning how to kind of figure out how to love each other,” says Murphy.

Preparing for the role of Alexis

Murphy says that when she got the breakdown for her role, it was a blonde, ditzy, socialite character. But one detail at the bottom of the breakdown caught her eye: “It said like a young Goldie Hawn. And so when I read that, I was like, ‘Oh, okay!’ … We love Goldie Hawn! And yes, she's like effervescent and perhaps can be perceived as a little bit ditzy. But she's also this shining light. And she has this kind essence about her. And I was like, ‘Okay, I gotta lean into that too, so it's not just this kind of despicable character.”

Murphy was new to acting when she landed the role, so to prepare, she watched YouTube clips of the Kardashians, the Olsens, and Paris Hilton.

“I owe them quite a lot of my character because what I took away -- two things. The first being like the way they speak. So like really big time vocal fry, and it's very lazy and very fun, and they all kind of upspeak. And so I took that,” Murphy says.

The other takeaway: how the women carried their handbags. Murphy explains, “My character on the show kind of prances around with her limp wrists in front of her like a bit of a T-Rex. And that came from watching these women put their handbag over their wrist as they were shopping, with their palms facing up. It was kind of a universal socialite way of carrying -- in super high heels, kind of teetering down the street.” 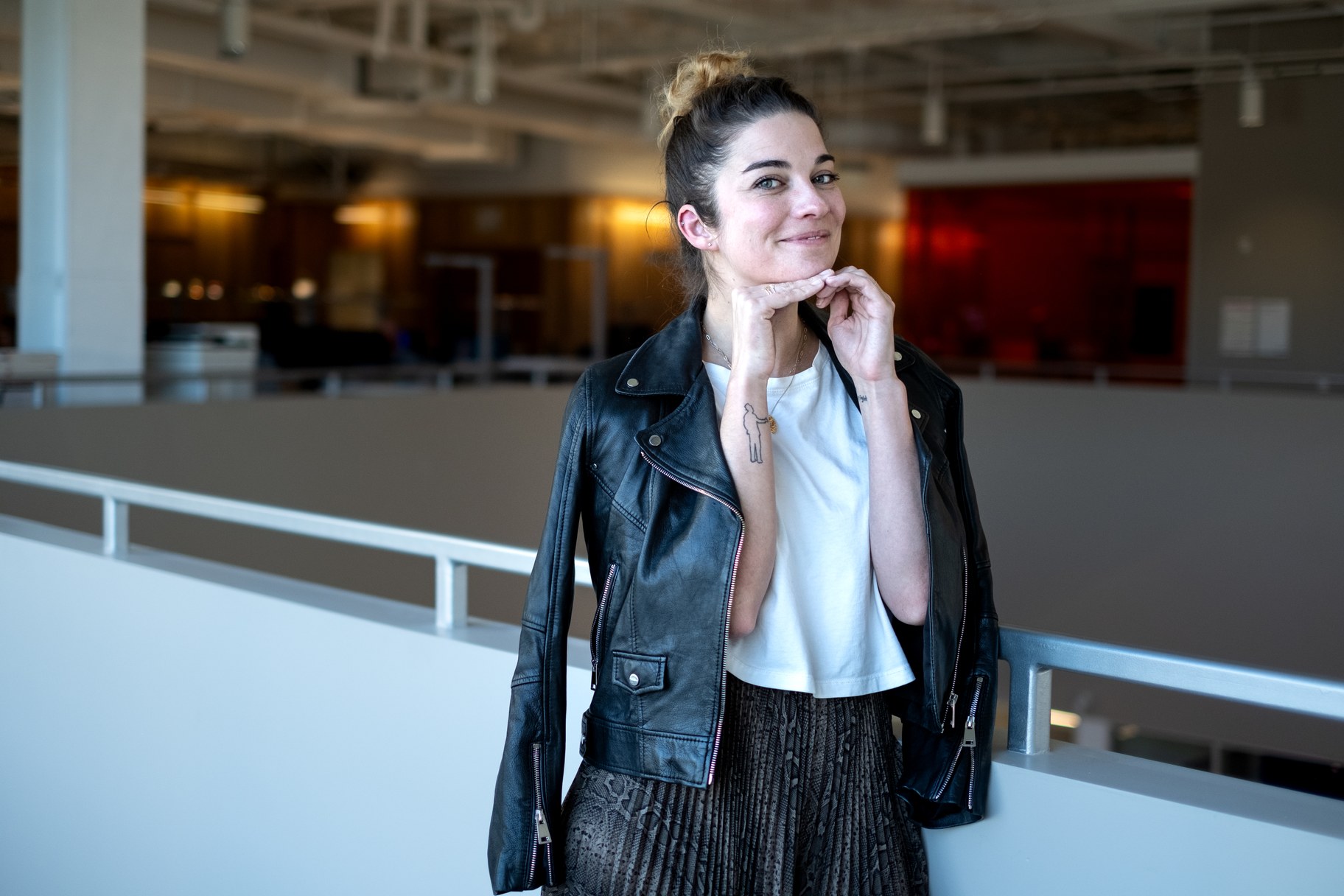 Annie Murphy with her “T-Rex wrists” at KCRW. Photo by Amy Ta/KCRW

She says that one night, she was up late and had an idea: “What if there was no handbag? And I flipped a wrist, and then I flipped another wrist. And then I ended up with this thing that just kind of stuck with me, and ran away with itself over the course of six seasons.”

Vapid to mature: The evolution of Alexis Rose

Murphy says that in season one, her character relied on men, money, and material things, and she had “vapid and skin deep” relationships.

Then when she was forced out of the pampered environment and into Schitt's Creek, Murphy says she had actually had meaningful relationships and friendships.

“That was really transformative for her. And she became very much an independent person in the sense that she took herself back to high school at the age of 30 to get her diploma, and then got her public relations degree. And she grew into a much more likeable, selfless character over the years,” Murphy says.

How the town makes Alexis and David Rose better people

In the beginning, all the characters can’t wait to leave Schitt’s Creek. What prevents them from leaving is a lack of money. Murphy adds that there’s something else on a deeper level: “Some of the characters don't actually want to get out because they're finding a better version of themselves in this place.”

“I think for my character in particular, and then for Dan Levy's character (my brother David), they both find aspects of themselves that they didn't know they had -- that this town provided them with,” Murphy says.

Why the show became so popular

“I knew it was going to be something special because Eugene [Levy] and Catherine [O’Hara] were attached to it. But I didn't really realize the degree to which it would explode,” says Murphy.

The show also taps into a sentiment that Americans might be feeling: no sympathy for the rich. “This idea that you kind of love the very wealthy, love to watch them on TV perhaps; and hate to actually think too much about what they are and what they represent,” says Murphy. 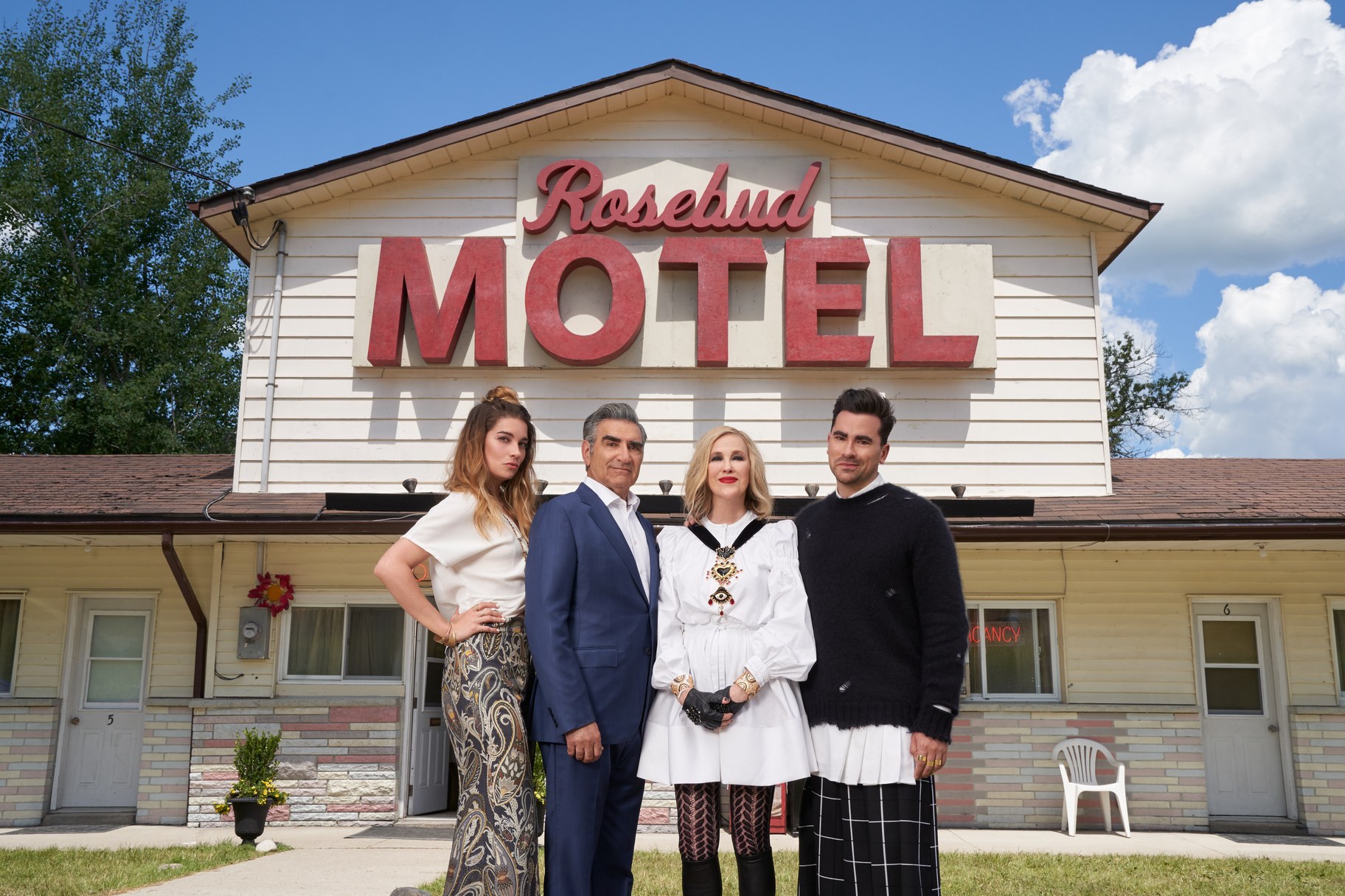 Murphy recently landed a new job on the forthcoming AMC show called “Kevin Can F**k Himself.” “It’s a dark comedy, and it’s a character very, very different from Alexis. And I can't wait to see what happens,” Murphy says.

Stagecoach and Coachella are delayed. What does that mean for the entertainment economy?

As more people stay home to protect themselves from coronavirus, they’re spending less money, and that could continue to hurt global and local economies. Companies are...

How to cope with coronavirus stress -- without doomsday prepping

USC psychology professor Norbert Schwarz says the risk is real, but panicking hinders your ability to do what’s reasonable. “Calm down. Watch a little bit less news about...

Do hospitals have enough beds, ventilators and physicians for influx of coronavirus patients?

Nobody really knows how bad the coronavirus outbreak will be in the U.S. Most people who get it probably won’t require hospitalization. But vulnerable populations might...

‘Bodies’: Why thousands of women are suing the makers of vaginal mesh

Melynda was a 32-year-old woman who exercised regularly and lived a healthy life. But she was diagnosed with Pelvic Organ Prolapse, and doctors recommended that she have...

Annie Murphy on ‘Schitt’s Creek’ success, and how Alexis Rose grows from ditzy to deep

Annie Murphy is a breakout star in the Canadian sitcom “Schitt’s Creek,” which is in its sixth and final season, and has gained a cult-like following.