Tommy Gelinas unapologetically loves the San Fernando Valley. He even wears a baseball cap with the area code “818” on it. He was born and raised in the SFV, and he and his eight siblings (five brothers, three sisters) grew up building hot rods, skateboarding in drained swimming pools, and shooting at cans in the foothills. Occasionally they hobnobbed with Hollywood royalty who lived nearby.

“We’d go to Bob Hope’s house at Halloween and he would throw in full-size candy bars and money,” Gelinas says. “It was just a fun, safe place. So when people talked doodoo about the Valley, we didn't really care because we had everything here.”

He acknowledges that the Valley typically ends up as the butt of the joke, with its suburban sprawl, strip malls, and dialect made famous by both the film Clueless and musician Frank Zappa and his daughter Moon.

But beyond the Galleria and “grody to the max” is a culture wholly unique even to Los Angeles. And when you take Gelinas’ nostalgia for that idyllic Valley childhood in the 60s and 70s, add a natural curiosity about who used to live there or what that building used to be, and the resources that come from running a North Hollywood t-shirt printing empire, you get the Valley Relics Museum. Gelinas is the museum’s founder and curator. 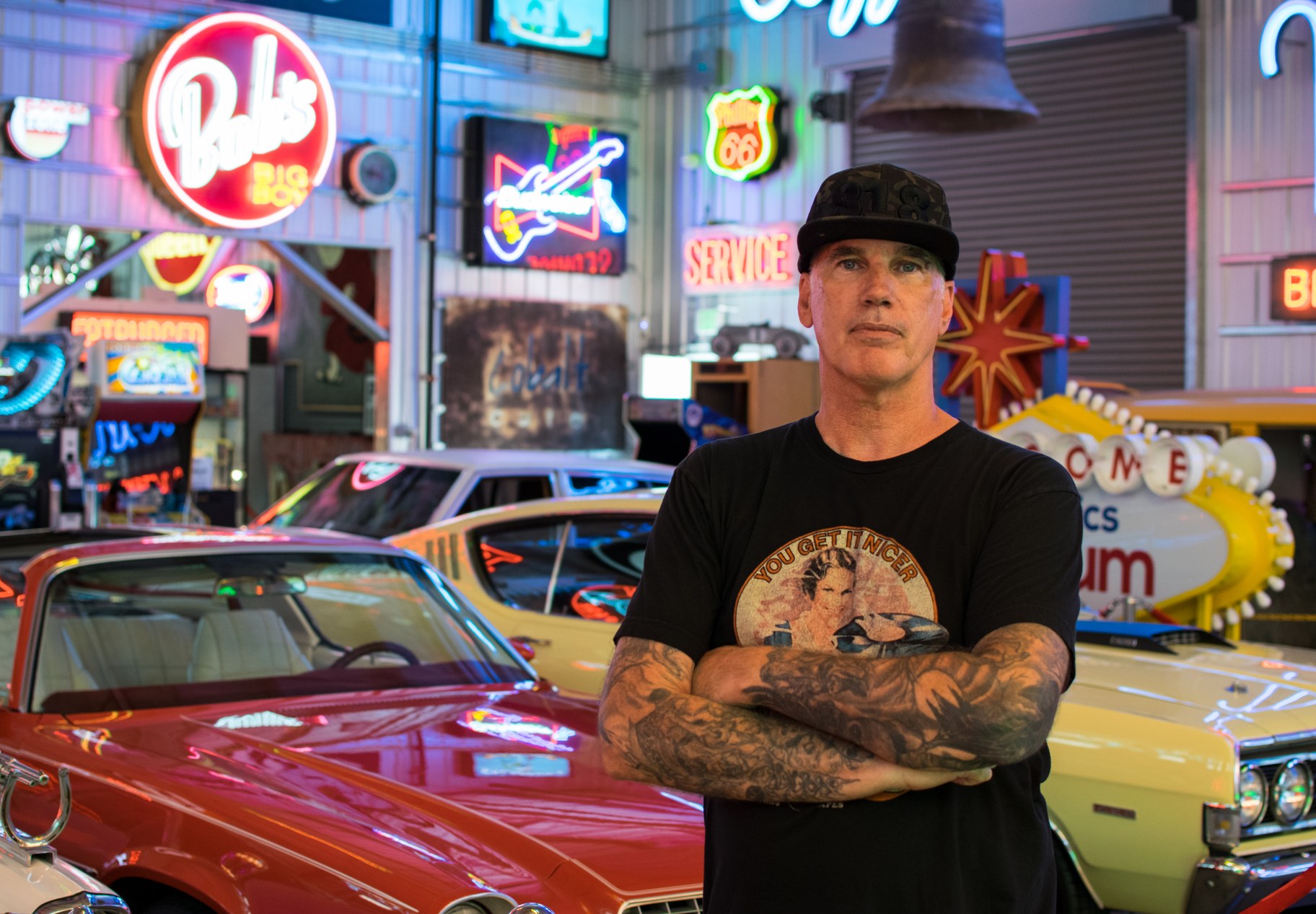 Tommy Gelinas stands inside the Valley Relics Museum, which he owns and curates. Photo by Brian Hardzinski/KCRW.

You’d never find the building if you weren’t looking for it. It’s nestled just south of Van Nuys Airport in a nondescript, beige airplane hanger set back from Balboa Boulevard. The sprawling warehouse is filled floor-to-ceiling with Valley ephemera, much like a TGI Fridays on steroids. Gelinas’ passion started out as a blog, then a personal collection. It snowballed from there.

“Hundreds of people contact me throughout the month. ‘Can you help save this home? Can you save this sign? There’s a wrecking ball in front of the location. Is there any way you can get down there? Is there anything you can do?’” Gelinas says. “And this was spearheaded by me, but really, really pushed and instigated by the community.”

Gelinas estimates he has about 20,000 pieces, and only about a third of them are on display. Museum sections are devoted to global aviation and manufacturing companies that used to have a significant footprint in the Valley, like Rocketdyne, General Motors, and Lockheed Martin.

But it’s still LA, so there’s a fair amount of celebrity kitsch. Some of it is straight-up quirky, like the actual living room wall from the home of “Dragnet” star Jack Webb. 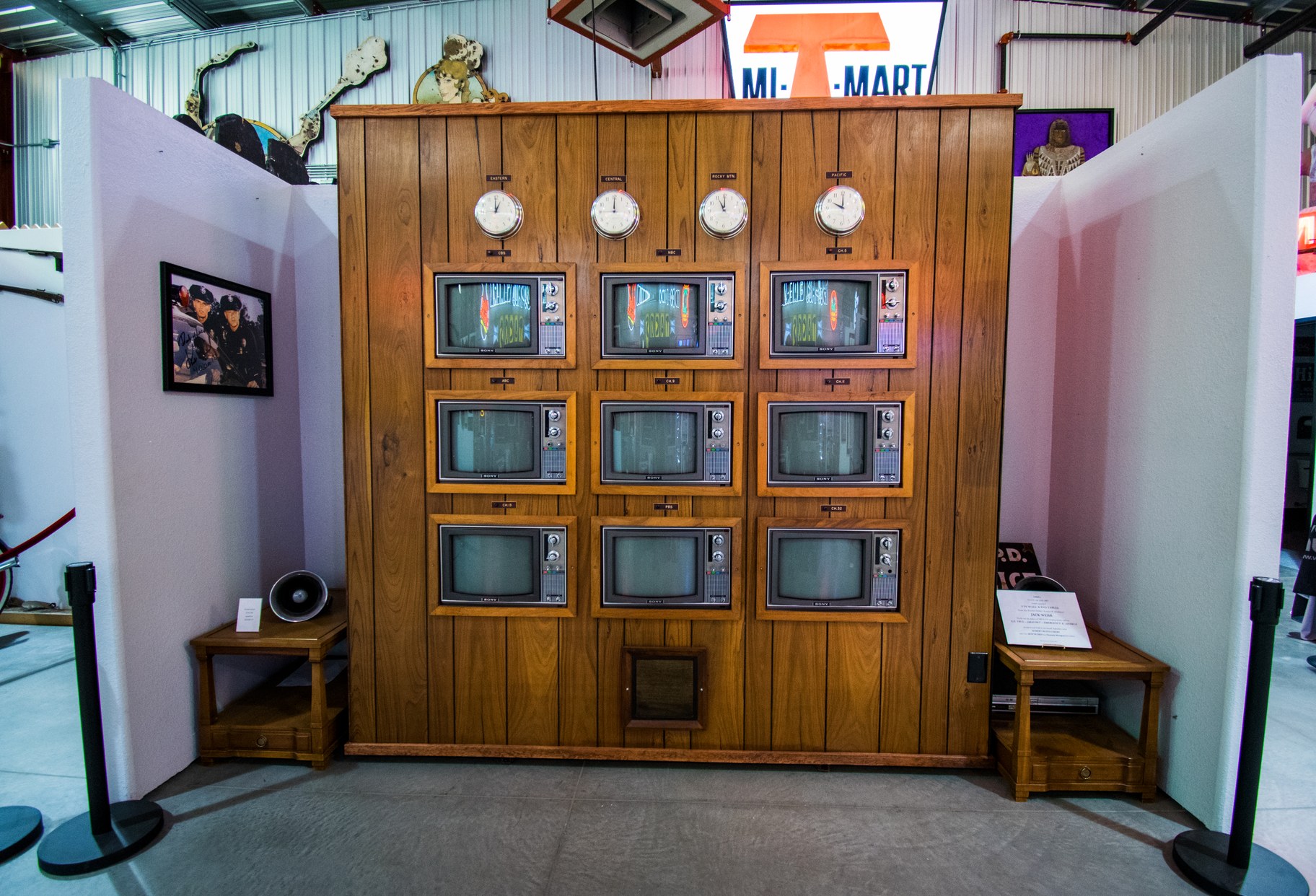 The Jack Webb TV wall in the Valley Relics Museum features a 10-foot high section of wood-paneling with nine television sets arranged in a square, and a quartet of clocks above the TVs are set to each time zone from Eastern to Pacific. Photo by Brian Hardzinski/KCRW.

Gelinas says Webb wanted to simultaneously watch his shows — ”Emergency,” “Adam-12,” and “Dragnet” — and keep an eye on the competition.

“He wanted to position his shows for the most amount of views. And it kept him on the forefront of what was trending, who was advertising,” Gelinas says. “This stayed in the home [after Webb died]. And so I had my staff and some of my volunteers go to the home and remove the 70s paneling, the framing. The TVs. We restored it. It's a huge amount of history.”

The museum’s biggest set pieces are neon signs rescued from long-shuttered or relocated Valley businesses, like the Pioneer Chicken chain, Nacho’s Mexican restaurant in Granada Hills, the DeSoto Pharmacy in Canoga Park, and the Palomino, which was the country western music hub of California. The Palomino’s large, blue-and-red flickering neon sign lit up North Hollywood for nearly 50 years. 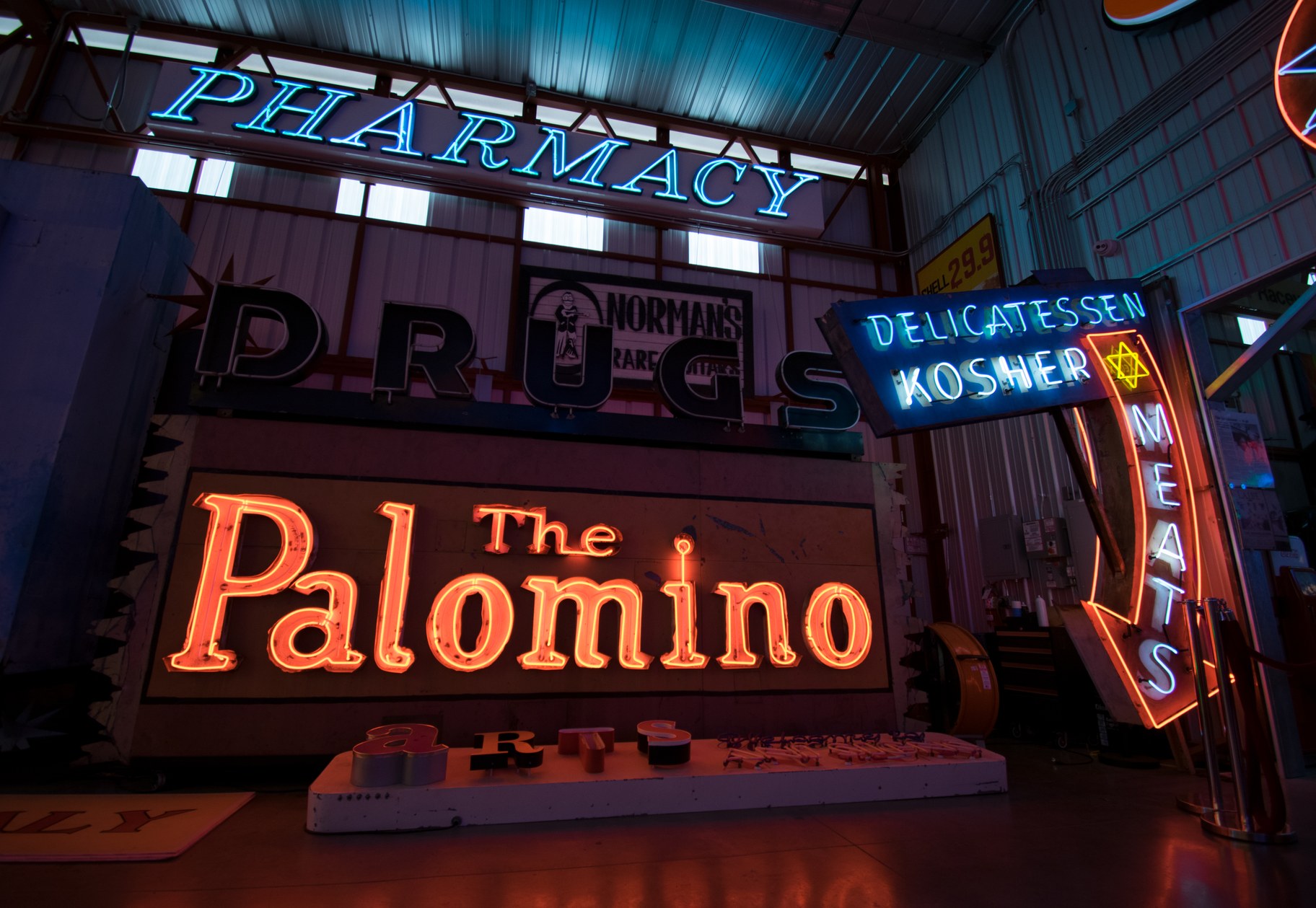 “The Palomino opened in ‘49. It was originally the Mule Kick, but this became like the spot for country music in LA,” Tommy Gelinas says. Photo by Brian Hardzinski/KCRW.

“Linda Rondstat got her start there. Dwight Yoakem. But you can go back to Johnny Cash making his appearance there. Everybody played there,” Gelinas says. “And it's kind of like the CBGB of country music. It's extremely iconic.”

The beauty in the mundane

Gelinas’ Palomino collection also includes employee uniforms, the wooden sign that hung over the bar, and the stage microphone The museum’s display cases include tickets and postcards, and even the blue-and-gold California license plate of one of the owners.

That mundane is part of the museum’s charm: coffee mugs, menus, and matchbooks that might be the only remaining relic from restaurants closed for decades. Preserving history that might otherwise be lost is important to Gelinas. So are the personal stories and the surprising connections people have when they see his museum’s collection.

Michael Levine is the third generation owner of Monty’s Steakhouse in Woodland Hills. His grandfather opened the original location in Pasadena in 1940, and his parents started the Valley iteration in 1957. Levine’s mother passed away a few years ago. After her cancer diagnosis, they spent their weekends driving all over the Valley, going to iconic restaurants and visiting museums. A friend told him about the Valley Relics Museum.

“My mom was about 4’11.” She’s wandering around, she looks in the case. And she sees Monty’s paraphernalia there. And I could just see her kind of tingle, and she says, ‘Hey, Larry, come over here and look,’” Levine says. “And it was like … for like a second they felt like, wow, we’re part of something.”

Levine’s dad was a little more reserved. But when he saw the ashtray and menu from his restaurant, he smiled.

“When you get a smirk out of him, you could just feel it. Big personality, but when it comes to emotion, it’s like trying to open up a can of tuna with a butter knife,” Levine says. “You could see that he really loved the fact that my mom got a kick out of it. And he loved the fact that … not that he would ever say it, but my father saw that he was a little part of something. I don’t think people realize, in the moment, the difference they make.” 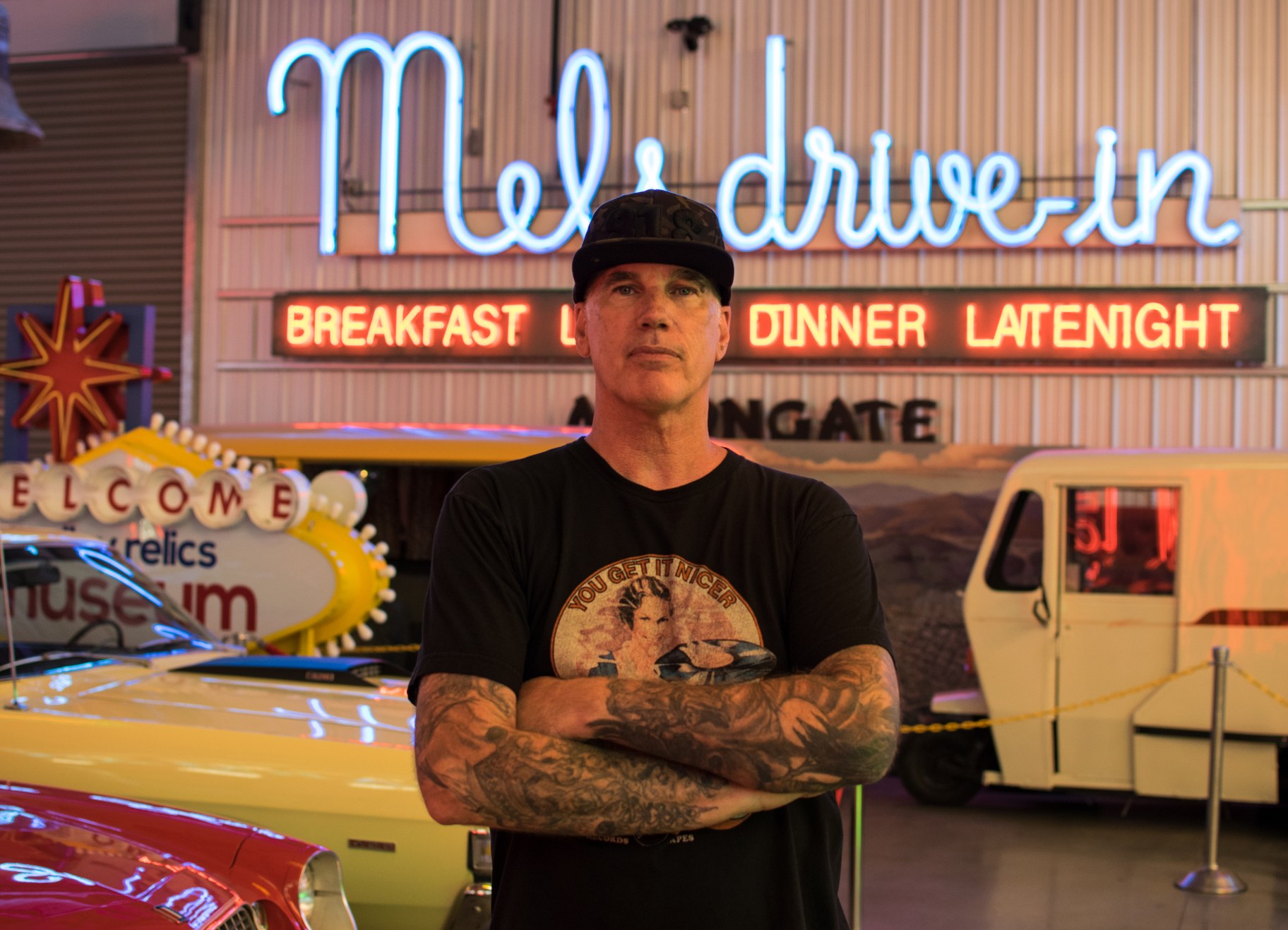 “I could drive you around the Valley, and 80-90% of these places are gone, the building's gone, there's no trace of it,” Gelinas says. Photo by Brian Hardzinski/KCRW.

Gelinas and his museum made a difference to the Levine family. Valley history is his passion, and so is passing it on through community events, and hosting school field trips.

He recalled one that included a handful of teachers, a dozen students, and one mouthy sixth grader — Valley born and raised, just like Gelinas — who professed to know as much of the region’s history as he did.

“This sixth grader is testing me, kind of bullying me, which I thought was awesome, and he goes, ‘You know, ask me something.’ And I go, ‘Okay, who's Bob Hope?’” Gelinas recalls. “And he looks at me and he goes, ‘I know that.’ And I go, ‘Okay, tell the class.’ And he looks around and he says, ‘It's an airport in Burbank.’ And I gotta tell you, he was right. But as each day goes by, the history is getting lost.”

And making sure Angelenos — smart-alecky middle schoolers and all — don’t lose that history is what keeps Gelinas collecting and scouring the 818 for San Fernando Valley treasures.

Why some people may need a booster shot, especially if they got Johnson and Johnson’s single dose

The CDC is expected to meet on Friday to discuss whether or not a booster shot is necessary.

More kids are getting COVID. Unvaccinated family and friends could be to blame

No coronavirus vaccines are approved for anyone under age 12, and right now, kids of all ages are suffering from a massive spike in new COVID infections.

Apple announced it will start reporting images of child pornography it finds in its iCloud storage database to law enforcement. The company will use a new technology called...

Hollywood is back in action — bigger than before. The number of shoot days in LA County is slightly higher compared to pre-pandemic levels, according to FilmLA. But there’s...

Tommy Gelinas unapologetically loves the San Fernando Valley. He even wears a baseball cap with the area code “818” on it.