LAUSD will be all-online this fall. How a parent and a teacher are planning for it LAUSD students won’t be going into physical classrooms this fall. All courses will be online only. Photo courtesy of Brian Lopez.

KCRW: What was your reaction to the news that fall classes will be online only?

Liz Dwyer: “I actually felt relieved that the decision had been made so far in advance at the start of the school year. So that gives parents and educators some time to really plan out how we're going to approach this school year.

Brian Lopez: “Everything that Miss Dwyer just said, I echo. One, it was nice just to hear an announcement. And I was happy that it was a lot earlier in the summer rather than right before the school year started. … And two, just to hear that we were going online so that now I can start to plan my year and how a year online is starting to look like.”

KCRW: Is one month enough time to plan?

Brian Lopez: “Yeah, I can't go anywhere. So I'm just stuck at home with with my thoughts and ideas. So now's the time to just write them down and get ready.”

How might you change what you did in the spring? That was a big learning curve for everybody, but teachers most importantly. Are you thinking of changing the way you teach now?

Brain Lopez: “Yeah, totally. The spring gave me a lot of opportunities to just try stuff out and see what worked, also to learn about all the different websites and resources that are available to me as a teacher.

So definitely this year, I would like to start off with more community-building, more getting to know the students, having them feel comfortable even to just come to my class in Zoom or online; getting to know the parents as well, and how we can work together to make sure that these students learn online. I think that's the biggest key — is making sure that they’re learning.”

As a parent, is it a challenge to get your son to learn remotely?

Liz Dwyer: “Oh, absolutely. It was a struggle all spring, when they first started staying home. Getting him to log onto the courses was a struggle because oh there's Netflix, or he could be on Snapchat or Instagram, or maybe he doesn't get up on time because he doesn't have to do the drive over to Hamilton [High School].

Some of the classes that he had were not live classes. And he was just sort of getting the equivalent of homework packets. And I think that's challenging for even the best students to stay engaged with.

But I think that also was because teachers were scrambling. I know for my son … the way he learns best is when he has a really strong, healthy relationship with a teacher. And we know that learning takes place when you have those relationships, when you have that trust, and a teacher can actually understand what's going to influence and motivate a child.” 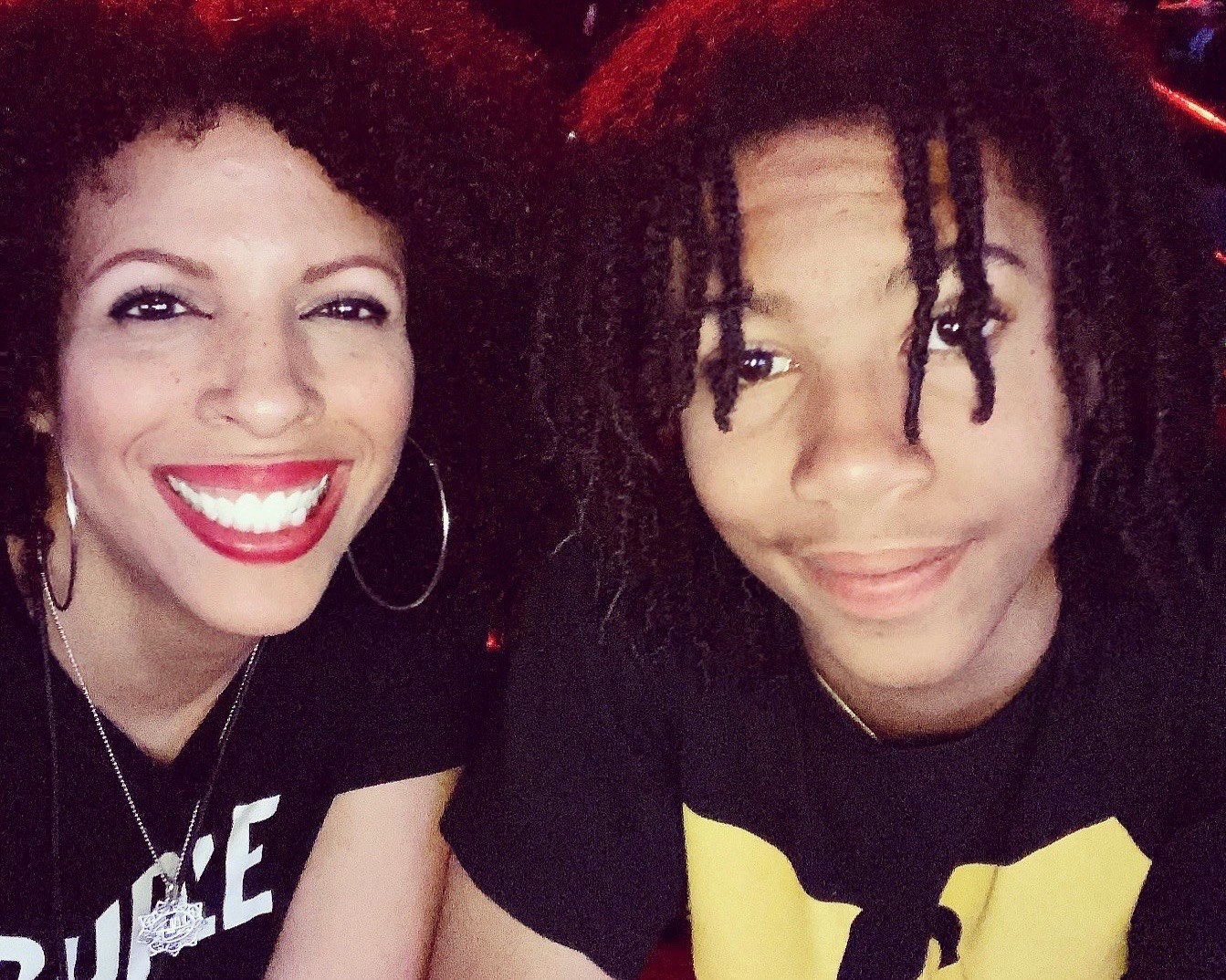 Liz Dwyer with her son, who’s about to become a high school senior. Photo courtesy of Liz Dwyer.

How are you going to build relationships with students remotely?

Brain Lopez: “We're just really starting the year off, just getting to know the students, asking them questions about their life, about their interests, kind of making that human connection, face-to-face on Zoom or through Schoology, the app that we use through email or text.

… Yeah, it's going to be a challenge not being face-to-face. But I do plan on having more live sessions so that I can really talk with the students and get to know them, and they can see my face, and I can see their face, and just kind of simulate that if we were in the classroom-type environment.”

Will there be more live instructions in the fall?

Brian Lopez: “That's what I plan on doing. … Teachers were scrambling in the beginning because this was all new. ... I think I'm definitely going to take this time before the school year starts to develop live interactive sessions with students, and less of just, ‘Here's some work, or here's something to read, go read it on your own time.’

I know some students need that. And that's great. But I also really value the one-on-one and me with the whole class, our interactions. And I really want to get more of that, even if it means not moving so quickly on the content.” 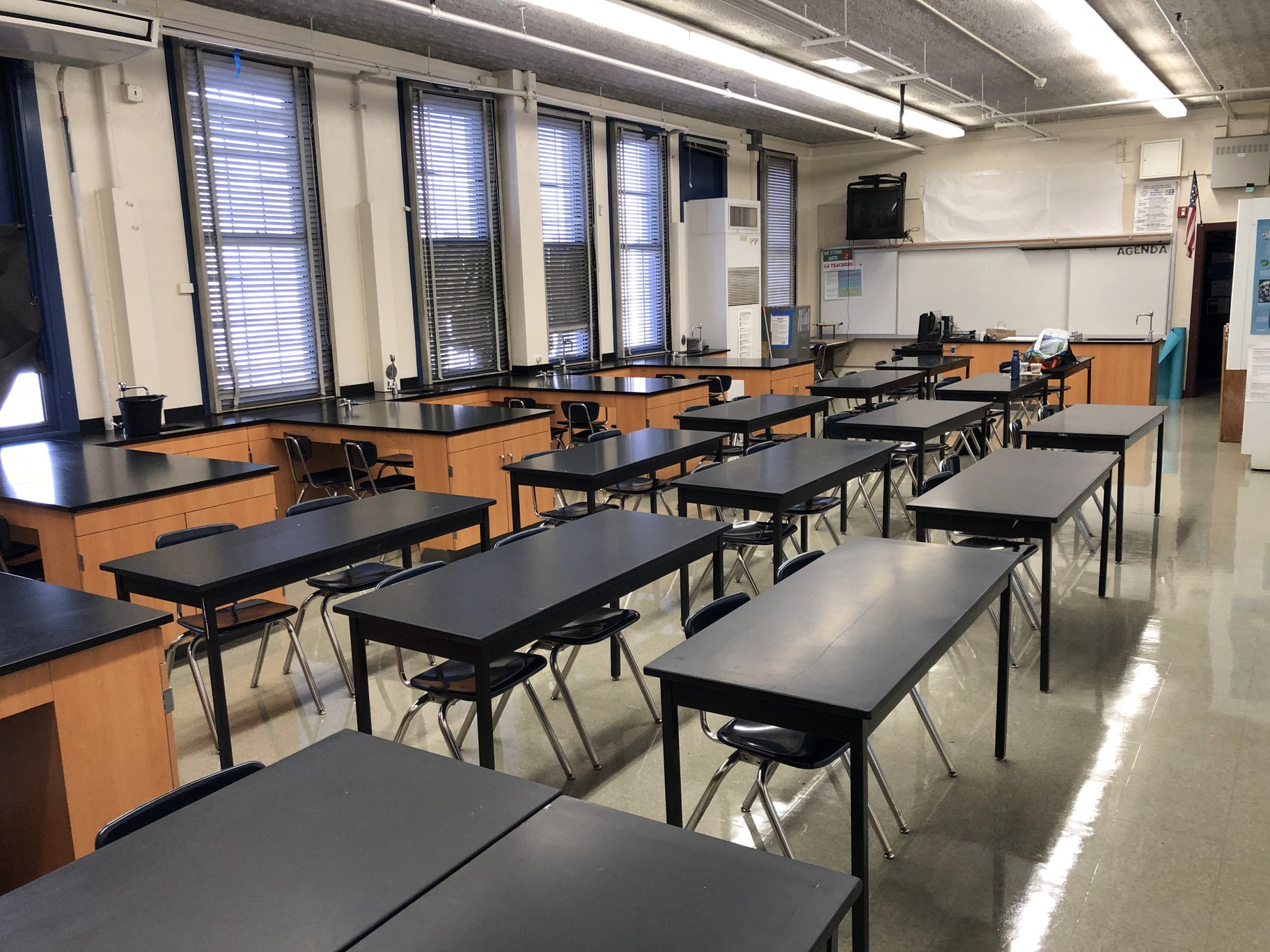 Brian Lopez says not being face-to-face with his students in his classroom will be a challenge. Photo courtesy of Brian Lopez.

What’s it like getting your son to learn at home while you're trying to earn a living?

Liz Dwyer: “It's a horror show. … And I have a rising senior, right. So for friends of mine who have younger kids who are trying to work remotely, or who have to still go into work, and they're having to make other arrangements and try to get their kids up to speed educationally, I mean it's a real challenge.

… The reality of kids being at home is you can't put everything on teachers. … You can't expect a school to pick up the slack economically or socially or solve all of our problems during a pandemic. You just can't.

So for me as a parent trying to say like, ‘Listen, like you have a summer school class. You have to log onto this, or else they're going to drop you.’ I feel like a broken record at times.

It's a real struggle, like he is mentally out of it completely. And I know he is.

I think the district has been great in terms of, you know, they're using Edgenuity at Hamilton. I don't know if they're using it district-wide for his summer school classes. And they've assigned him a coach who he's supposed to check into — that doesn't work out so well. So I end up checking in with the coach.

But really, I think that everyone is making the best of it that they can. … We actually knew this was coming. It didn't have to be this way. We had time to plan, like it can't be on the backs of teachers and parents to figure this out.

We needed the leadership to be able to say, ‘Listen, we can see what's happening in other parts of the world. We can't have things both ways.’

And LAUSD, most schools don't even have a full-time nurse. … The custodial staff is overworked at Hamilton. There's like 2700 students and they're packed in there like sardines. How is that possibly going to work? Reaching those kids academically on a good day is a challenge for teachers who work so hard.”

Brain Lopez: “I was nodding my head along. Just thinking about all the guidelines that the CDC had published. And I was like, yeah, this is not going to work out with LAUSD. There are way too many students in the classroom. It was not going to go well.”

Liz Dwyer: “One other thing that I think about is that we know from the data that Black and Latino Americans are being disproportionately infected and dying from this virus. And so if you look at our school population in LAUSD … which is predominantly children of color, and the potential for those kids who are asymptomatic, because even if you do a check for a temperature above 100, not every carrier has a fever. The potential for us to have a complete disaster in communities of color in Los Angeles was huge. So in that sense as well, I feel like a huge sense of relief.”

LAUSD goes all-online this fall. A parent and a teacher weigh in

LAUSD will be all-online this fall. How a parent and a teacher are planning for it

LAUSD announced on Monday that students won’t return to in-classroom learning when school starts on August 18. How will parents and teachers plan for more remote learning?

Many businesses in California are required to shut down again, including beauty salons. Rosey Ibarra owns Social Salon Suites in Glendale. She rents out work stations to...

A new investigation found that transporting deportees can spread COVID-19 around America and back in the deportees’ home countries.

What a rabbit plague can teach humans about coronavirus

Rabbits in Europe, Asia, and Australia have succumbed to rabbit hemorrhagic disease (RHD). Millions have died. Now RHD is spreading in the U.S.

The ups and downs of shooting a TV show now

Rules are in place for Hollywood to begin production again. Actors are being asked to apply their own makeup. Cast and crew can expect to get tested at least once a week....