Outside of the Olympics, many people don’t pay much attention to gymnastics competitions. But the UCLA women’s team makes a habit of breaking through the public’s usual indifference.

It wasn’t the first time one of Dennis’ routines went viral. Last year, her routine to a Beyonce medley got similar attention.

Behind both these routines is dancer Bijoya “B.J.” Das, a volunteer assistant coach for UCLA Gymnastics. Her choreography is a mix of traditional gymnastics moves and dance trends you might see on TikTok.

Das tells KCRW that the team always inspired her, and she was a collegiate gymnast too.

“I always looked up to UCLA. They've recruited Olympians for years, decades now. And they were always known for their fun floor choreography. And so when I started getting into dance, I completely stepped away from the world of gymnastics,” she says. “But as I saw that college gymnastics evolved, and it got bigger, and performance became even more important, I just had to get back into it in a different way.”

She says UCLA stands out with its culture of integrating dance and gymnastics, and other teams are following suit. “It really brings a wider audience to watch sport. … We definitely have a bit of fearlessness when it comes to just trying things that aren't very traditional in the sport of gymnastics.”

Doing this integration is difficult because many of the gymnasts don’t have formal dance training, Das notes. “And if they do, maybe it's a ballet instructor coming in once a week to work on their turnout and their posture. But it's generally not a whole lot of extra time that you can dedicate to dance. Because especially in the elite world, there's hours and hours dedicated to all four events. … But I think like for athletes who make that [combining dance] a priority, it can definitely be done. … It would be lovely to see that more artistry, I think, just across the board.”

Das says because this is Dennis’ senior year, they wanted to go out with a bang during the January floor routine, but they weren’t sure what that was going to look like due to the pandemic.

Their planning began around the time of George Floyd’s death and Black Lives Matter protests. Das says she went to a protest in Hollywood and was moved by the experience.

“We wanted the music to reflect Black culture, Black excellence, and make a statement in some way. And so we really just started with songs that spoke to her, and that represented Black culture, and really just who she is as a woman.”

They identified about 85 songs on Das’ Spotify list. “We just really started thinking about, like, how it would look together, what kind of story would it tell, and we narrowed it down from there. And eight volumes of the mix later, we finally arrived at that perfect one. We brought the Tupac song in at the last moment. And that was kind of the thing that I think sealed the deal and just made it feel like this complete story of celebrating Black culture.”

When it comes to choreography, Das says it’s different with each gymnast and Dennis is more collaborative.

“Usually, I started off the routine. I have spent some time with the music in my studio, just working out some ideas. And then I kind of showed them to her. And then she had some of her own input. And then a lot of it just came together naturally, like based on what she would do.”

“Her dad was in a fraternity, and he had a bunch of different step routines. And so we ended up FaceTiming him and asking him to show us some cool step moves from his college days. And so he ended up putting on his boots and his UCLA sweatshirt. He sent us these tutorials and we're like, ‘We have to include this interchain.’ So the choreography is actually from her dad.”

Performing without an audience

Due to the pandemic, the stands are empty while these gymnasts perform. Where do they get the energy to give it their all, like they were in front of a large audience?

“I think with all the teammates standing around the floor, like we all kind of naturally do the choreography with them, that's just something that hypes up the girl that's performing because they feel like they're not in it alone,” says Das. 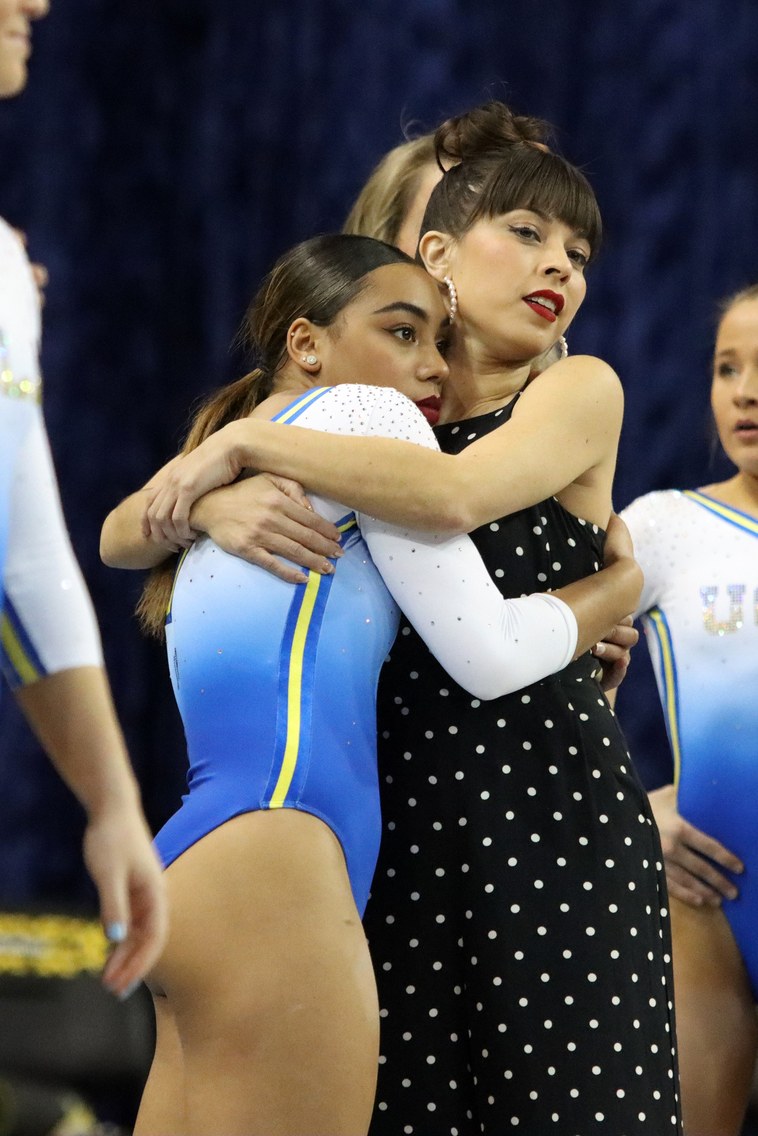 She adds that everyone is grateful to have this opportunity when other things are shut down and people can’t go to work.

“We really are just happy to be there and competing. And it's actually been really cool to see how the two teams competing against each other are also supporting each other, knowing that there's not really a crowd.”

Das says she’s not paid for her work with the UCLA Gymnastics team, but she does get paid for running UCLA’s recreational program and summer camps. 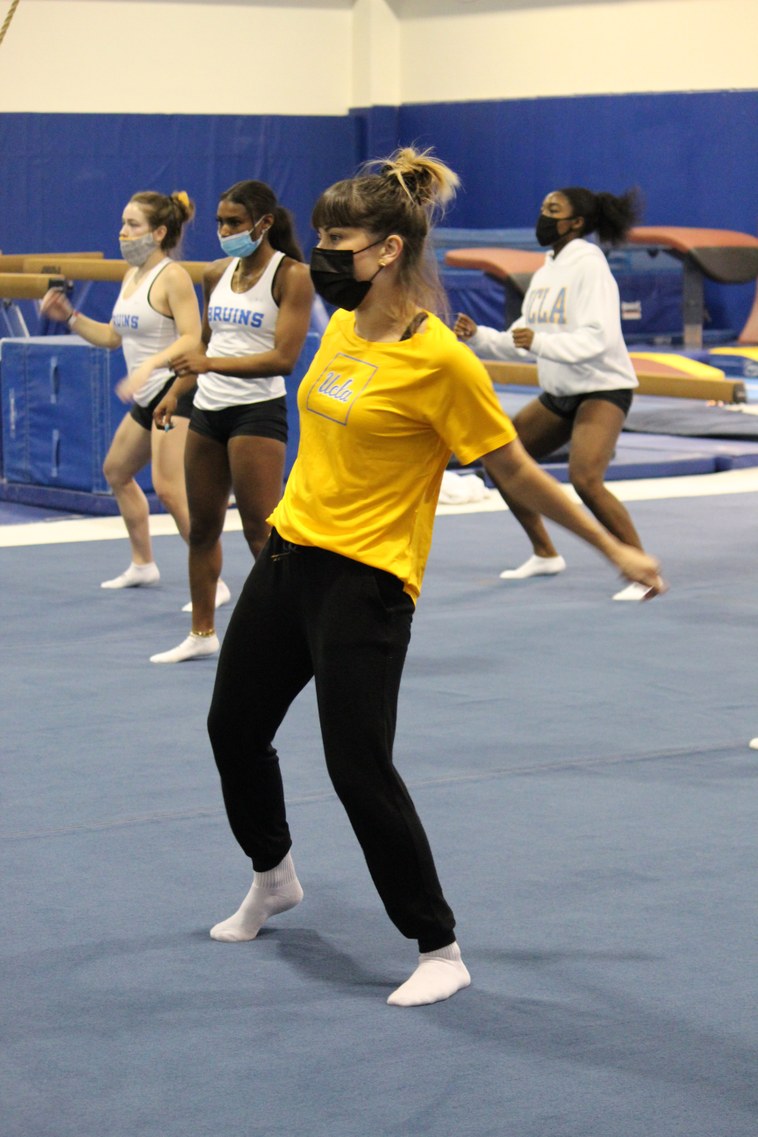 She has an agent, and works as a freelance dancer and choreographer while being the coach for UCLA. She says not much is happening now in the industry — no big auditions or touring.

“But I'm still working. I've done a couple of shows here and there and choreographed a music video recently. So it's nice that there are still things happening in entertainment. It’s just looking a little less busy than it's been.”

LA County is allowing elementary schools to reopen. How one K-12 school in Sun Valley plans to do that

LA County announced on Monday night that elementary schools can reopen safely. The county hit the metric of 25 infections or fewer per 100,000 people, allowing them to lift...

The Night Stalker (Richard Ramirez) was a serial killer who murdered more than a dozen people and terrorized LA for months in 1985. LA County Sheriff’s Department homicide...

“I always looked up to UCLA. ... When I started getting into dance, I completely stepped away from the world of gymnastics. But as I saw that college gymnastics evolved ......