A.O.C. in Brentwood is only open six nights a week, and brunch and lunch hours are not currently possible, says owner Caroline Styne. Photo by Amy Neunsinger.

Nearly a third of California’s restaurants went out of business and 1 million jobs were lost since the beginning of the pandemic. Now restaurants are struggling to rehire wait and kitchen staff, which means reduced hours and less money. There are also ingredient shortages and new safety measures like QR-code menus and cashless policies. So how are LA restaurants adjusting to this new reality?

Eater LA’s senior editor Farley Elliott notes that new pandemic-era programs, like al fresco dining, have been a lifeline for restaurants and might stick around for good.

But restaurants are still facing other problems, such as the struggle to find the products they need.

“You've seen not only prices increase for basic commodity goods ... it's also simple lead times for things to shipping channels,” Elliott says. “I’ve talked to chefs who can't even get plates for their restaurants that they're trying to open right now. And so it really is affecting every aspect of life.”

Elliott points out that one of the biggest challenges the industry faces is the lack of labor. He says many workers have realized restaurant work is not for them.

“[The] bigger parts of the conversation involve how the industry has traditionally underpaid its workers and passed those inexpensive monetary configurations onto menus because people don't want to pay $15 for a cheeseburger,” he explains. “We need to create more equity in the industry, we need to create better pay within the industry. ... It's going to take a lot of buy-in from diners.”

He says it’s also important to remember that hundreds of thousands have died, and that’s taken a toll on the numbers of workers available as well.

“At one point in the pandemic, being a line cook in California was the most dangerous job you can have. There is a subset of this industry that is never going to return because they've passed away, which is the saddest part of all.” 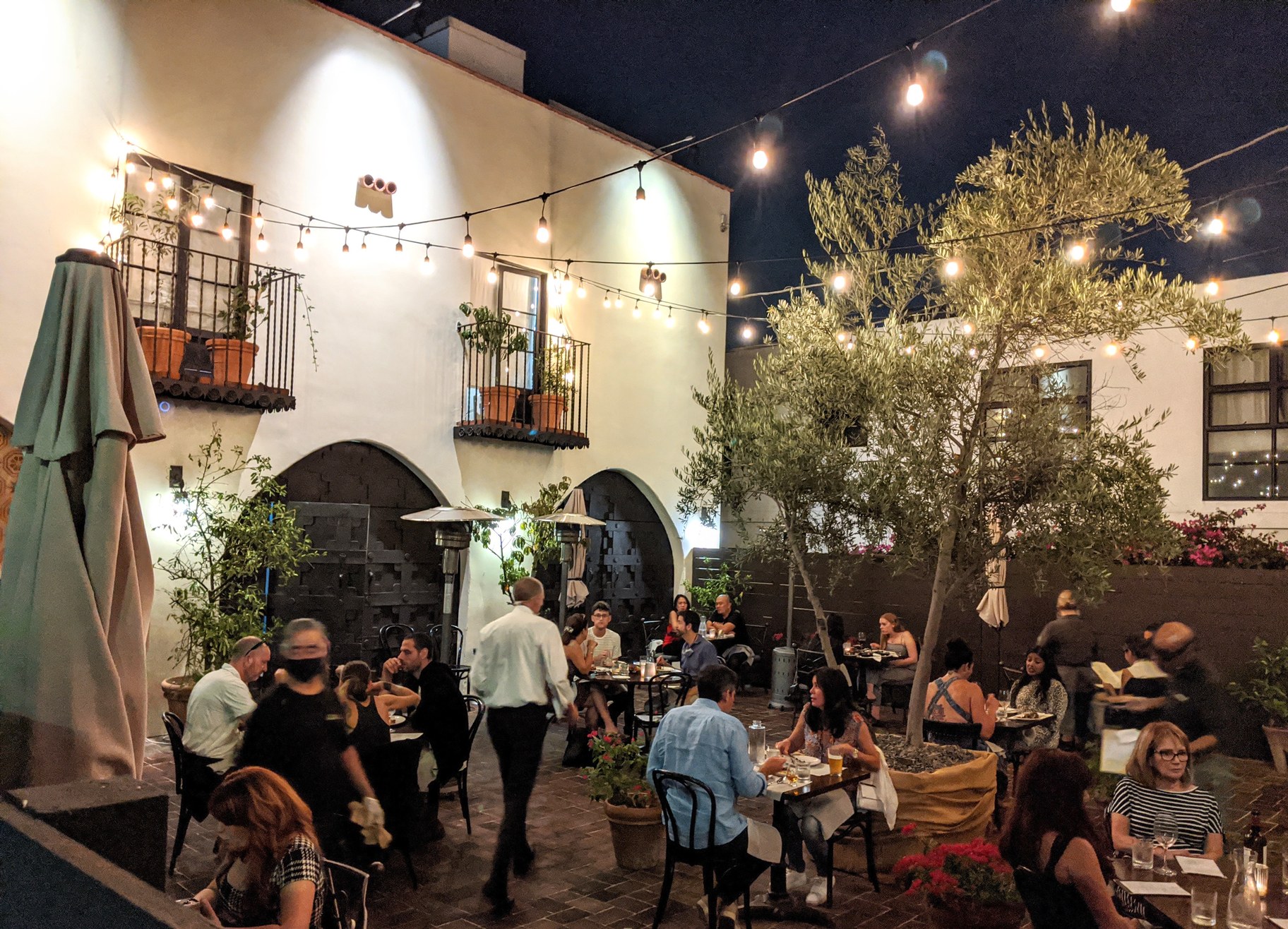 Unmasked customers dine on the patio at A.O.C. in West Hollywood during the pandemic. Photo by Suzanne Lanza.

Caroline Styne is the co-founder and owner of the Lucques Restaurant Group, which owns restaurants including A.O.C in West LA. She says each of her restaurants is understaffed and operating at reduced hours.

“Even after getting through this last horrible year and a half, trying to get back and operating at a normal pace has been basically impossible,” she tells KCRW. “I've never had such a difficult time trying to hire people. And it's holding back recovery across the board for restaurants around the country.”

Right now, she says the A.O.C. restaurant in Brentwood is only open six nights a week. No brunch or lunch hours are currently possible.

“The only way to actually make money is by getting all of those service periods in and turning our tables and getting as many tables into the room as possible. And so when we're only able to operate a fraction of our shifts — and with reduced capacities because we don't have enough service to take care of people — we can't recover financially.”

Styne points out that all restaurants are fighting for the same limited pool of potential employees. The staff she does have on-board are also nervous to be back working.

“We've had a couple of staff members who basically had panic attacks when they came back to work and had to retreat back home. I mean everyone has PTSD from being locked away, apart from each other for so long.” 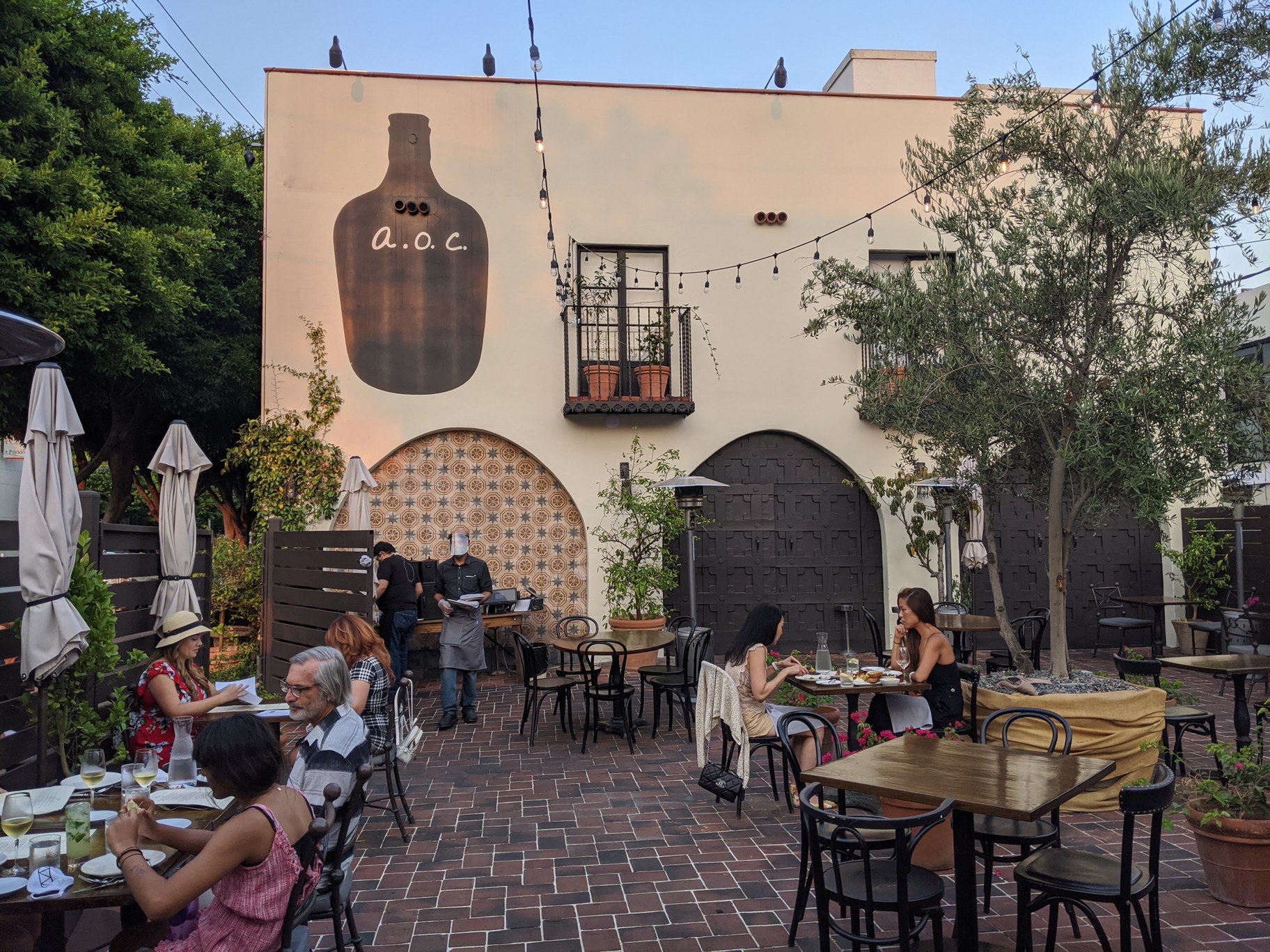 A waiter with a face shield serves unmasked customers at A.O.C. in West Hollywood during the pandemic. Photo by Suzanne Lanza.

She adds “At this point, we are struggling. We're trying to get as many people in the door as possible, because we're all trying to get out of this financial hole that we've been in since the beginning of COVID. There is a demand for people to come in, which is amazing. But I … want to temper people's expectations and just say, ‘Look, we are doing the best we can, we're all hands on deck.’”

Nearly a third of California’s restaurants went out of business and 1 million jobs were lost since the beginning of the pandemic. Now restaurants are struggling to rehire...

After a surge of COVID-19 cases, Japan on Thursday declared a state of emergency in Tokyo, where the Olympics are set to begin in two weeks.

Online learning could continue next year for some California students

Most California students will return to in-person classes this fall. But Governor Newsom and state legislators want all K-12 schools to offer an option for remote learning....

When Shakespeare scholar Ayanna Thompson’s son was in third grade, his class worked on a year-long project about an influential historical figure, and they dressed up as...

Beyond cantaloupe and honeydew: Diversity of melons and how to enjoy them, from breakfast to dinner

For years, local farmers have been growing an expanding number of varieties that come from France, Israel, Spain and the Caucasus.