In “Squid Game,” players assemble for what they believe to be an innocent series of games. Instead, those who lose face “elimination,” which means death. Photo by Youngkyu Park.

The Korean dystopian thriller “Squid Game” is so popular that a Korean broadband service provider filed a lawsuit against Netflix, saying it couldn’t handle the surge of viewers trying to stream the show. But its popularity spans the globe, as Netflix says it’s number one in 90 countries.

William Lee Adams, a cultural critic for the BBC World Service, says the show is centered around 456 people who are facing severe debt and financial despair, and have to navigate a series of deadly children’s games. It’s all in an effort to win $38 million.

“To win these six games, they really have to fight for their life. If you don't win the game, you're eliminated, which usually means you get shot or you plummet several 100 feet to your death. So the stakes are very high,” Adams tells KCRW.

He adds that the show is very raw and gory, depicting real violence like breaking someone’s leg or stabbing someone in the neck. The violence is central to the message of how dehumanizing capitalistic systems can be.

“It seems to suggest that chasing money at any cost is dehumanizing. And when your humanity goes into violence, where is your moral compass? It all disappears. Greed clouds people's vision, and they're suddenly willing to do anything to get what they want,” he explains. “They all come from different walks of life, yet they share this desperation.” 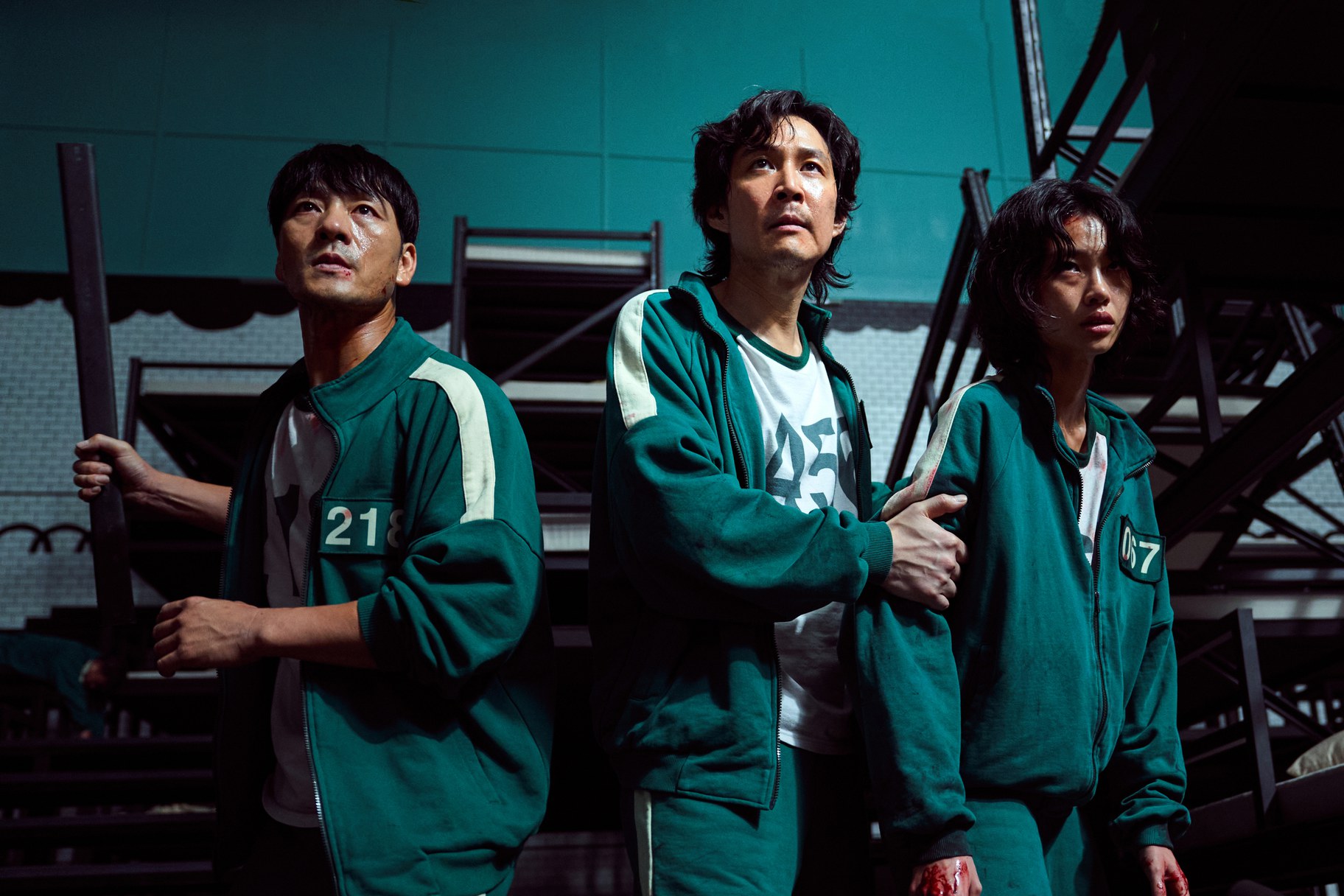 Players who want to survive the night must be prepared to fight for their lives. L to R: Park Hae-soo, Lee Jung-Jae and Kang Sae-byeok. Photo by Youngkyu Park.

Adams says the show is able to create attachments between viewers and each character, which makes each death that much more shocking. It’s also constantly changing the rules of engagement.

“You never know what a smart move is. So for instance, they say, ‘Pair up in teams of two.’ And you think, ‘Okay, I'm going to join with someone strong, I'm going to join up with my wife who's also here.’ But then the rules change and suddenly only one of you will live. One of you in this pairing is going to die. And there's a really poignant scene where a husband and wife are pitted against each other. So yeah, it kind of tugs your heart, and then throws it in gasoline and sets it on fire. It's a constant shock and awe.”

Adams theorizes the allure of “Squid Game” has to do with its use of children’s games, which evokes a sense of nostalgia among viewers.

“But that's twisted. These become games for survival fights to the death. … Take ‘The Sandlot’ or ‘The Berenstain Bears’ or even ‘Troop Beverly Hills’ — any of these movies about young people bonding over activities and then make them deadly games. … Suddenly your baseball is covered in nails. Suddenly the soccer ball is a bomb. I mean, that's the analogy, it's taking this very sweet activity and turning into something dark.”

He also points out that the timing of the show’s release with the pandemic might give viewers something to relate to.

“Many people who had always been financially secure, who had always had good jobs, suddenly felt the earth rumble. Maybe their hours are reduced, or they were put on furlough, or they lost their job altogether. Suddenly, people started to understand the concept of debt if they hadn't before,” he says. “And I think the pandemic made that feel so real, that idea of starting over. Obviously wealthier people have different choices and trade-offs to someone very poor during a pandemic, but still, we can all relate in some way to that idea.” 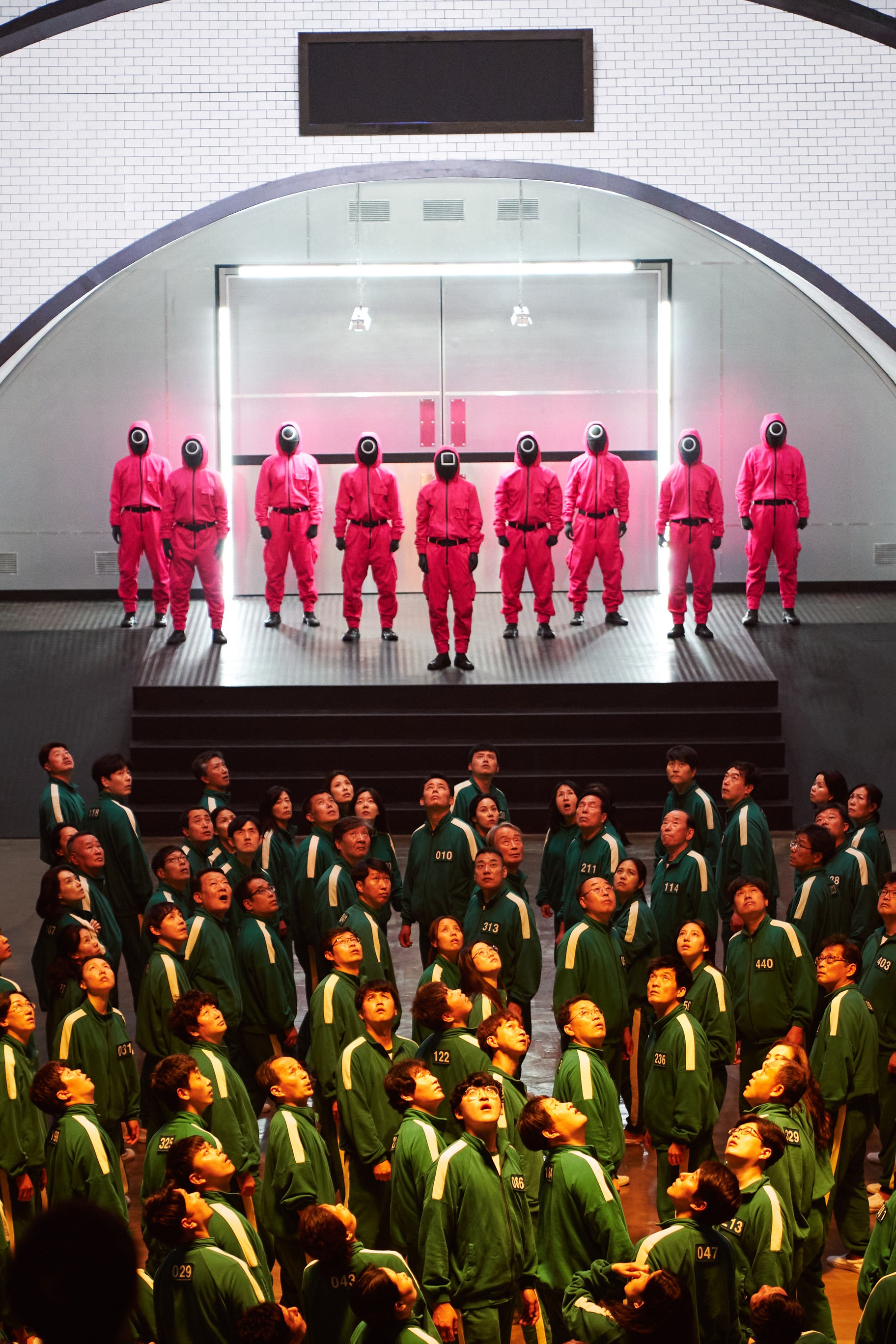 Players stare up at a glass piggy bank filled with millions in cash. The players who survive the games will walk away with the money. The more players that die, the more money is dropped into the bank. Photo by Youngkyu Park.

During the show, some contestants end up leaving the game, but are once again faced with the brutal reality of the real world. And at that point, Adams says it makes you think about which reality — the game or real life — is harsher.

“They're released back into the world and they say, ‘You know what, actually, living through that [game] hell is better than living here.’ I think a lot of them view their lives as dead-end roads, and at least the hell of the ‘Squid Game’ gives them the hope of an exit. Whereas in the current economy in their current situation, they don't see that route, which is really strange to think about. If murder and surviving torture effectively is an easier route than living, it really begs the question of what's going on in the real world.”