How the Trump administration chose politics over saving lives during pandemic, according to White House insider U.S. President Donald Trump points to a chart as he speaks about his administration's coronavirus disease (COVID-19) response during a news conference in the Brady Press Briefing Room at the White House in Washington, U.S., September 16, 2020. Photo by REUTERS/Leah Millis TPX IMAGES OF THE DAY

COVID-19 rates are slowly ticking back up in Southern California. LA County says the average daily case rate and test positivity rate have doubled in the past week. That’s partly due to the highly contagious Delta variant, which is affecting unvaccinated people (currently 4 million LA County residents remain unvaccinated).

Andy Slavitt is President Biden’s former senior advisor on COVID, and the author of “Preventable: The Inside Story of How Leadership Failures, Politics, and Selfishness Doomed the U.S. Coronavirus Response.” He talks to KCRW about the risks the Delta variant poses, and how political leadership factored into America’s dismal response to the pandemic.

“[The Delta variant] really is 2020 COVID on steroids. It’s twice as easy to catch,” he says. “But for people who are vaccinated ... the vaccines are very, very effective, particularly against getting sick. And so there's nothing that's really shaking my confidence in that.”

Because of the vaccines’ efficacy, Slavitt says he’s relaxed around mask-use, except when he has to travel.

He notes that there can be conflicting guidance around COVID safety, but he recommends taking precautions and doing what is comfortable for oneself.

“It's important that we recognize that the last year has been a traumatic experience for nearly everyone. Everyone suffered in different ways. ... I don't know anybody who hasn't suffered at all. And that's going to linger.”

But he points out that if vaccinated, it’s crucial to get back to life as we knew it.

“COVID-19 is joining the long list of things that [hasn’t] disappeared from our lives. But it's something that we are perfectly capable of not having overwhelm us. We're just not in the situation today where we are — again if we've been vaccinated — at such great risk, that we need to be constantly worrying.” 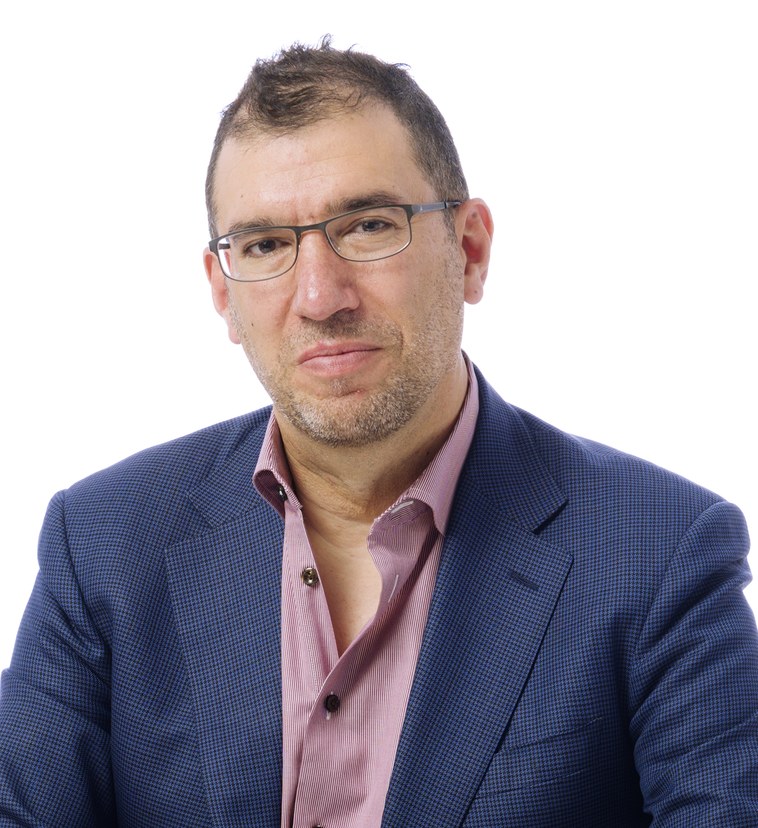 “[The Delta variant] really is 2020 COVID on steroids. It’s twice as easy to catch. But for people who are vaccinated ... the vaccines are very, very effective, particularly against getting sick. And so there's nothing that's really shaking my confidence in that,” says Andy Slavitt. Photo courtesy of Andy Slavitt.

Slavitt says throughout the pandemic, the U.S. was unable to combat the virus because communities were divided, especially when people’s vulnerability level to COVID dictated their lives. He refers to it as “the room service pandemic.”

“We have populations where people live [in] very close quarters, they work hourly jobs, they're exposed to the public all day long. And they're often Black and Brown communities with more challenging access to health care to begin with,” he explains. “Then we have people who live on the other side of that room service wall, who were able to get packages at home and watch Netflix, and stay relatively safe and spread out in their homes.”

Inside the Trump White House

Slavitt says the country suffered because of former President Donald Trump’s dismissive attitudes toward the pandemic. He explains that Trump was motivated by his selfishness and desire to be seen as a winner.

“He sees himself in everything. And once he saw COVID-19 as a reflection on him in his presidency, it became very difficult for him to do anything other than continue to downplay and deny that this was going on,” Slavitt explains. “He has that historic ability to change the narrative by saying what he thinks his supporters will believe. … I think he believed that he would ultimately be successful.”

When Trump announced he wanted to reopen the economy by Easter, Slavitt says he and Jared Kushner worked together to persuade the president to push back the date.

“The president ultimately delayed. But sadly, he only delayed until the end of April. And come the end of April, they did effectuate their strategy, which they called the state authority handoff, which they believed would allow them to escape accountability when things inevitably went wrong. And I'm not so sure that that ended up working out for them.”

Slavitt explains that whenever someone dissented about the handling of the pandemic, the Trump administration fired them or silenced them. He shares a moment where former Department of Health and Human Services Secretary Alex Azar wanted to add the phrase “but things might rapidly change” to an otherwise positive pandemic report that would be shared on “Fox & Friends.” Slavitt says that when the White House communications team learned of the phrase, he was pulled from the show and they forbade the DHHS from talking to the public for 45 days. 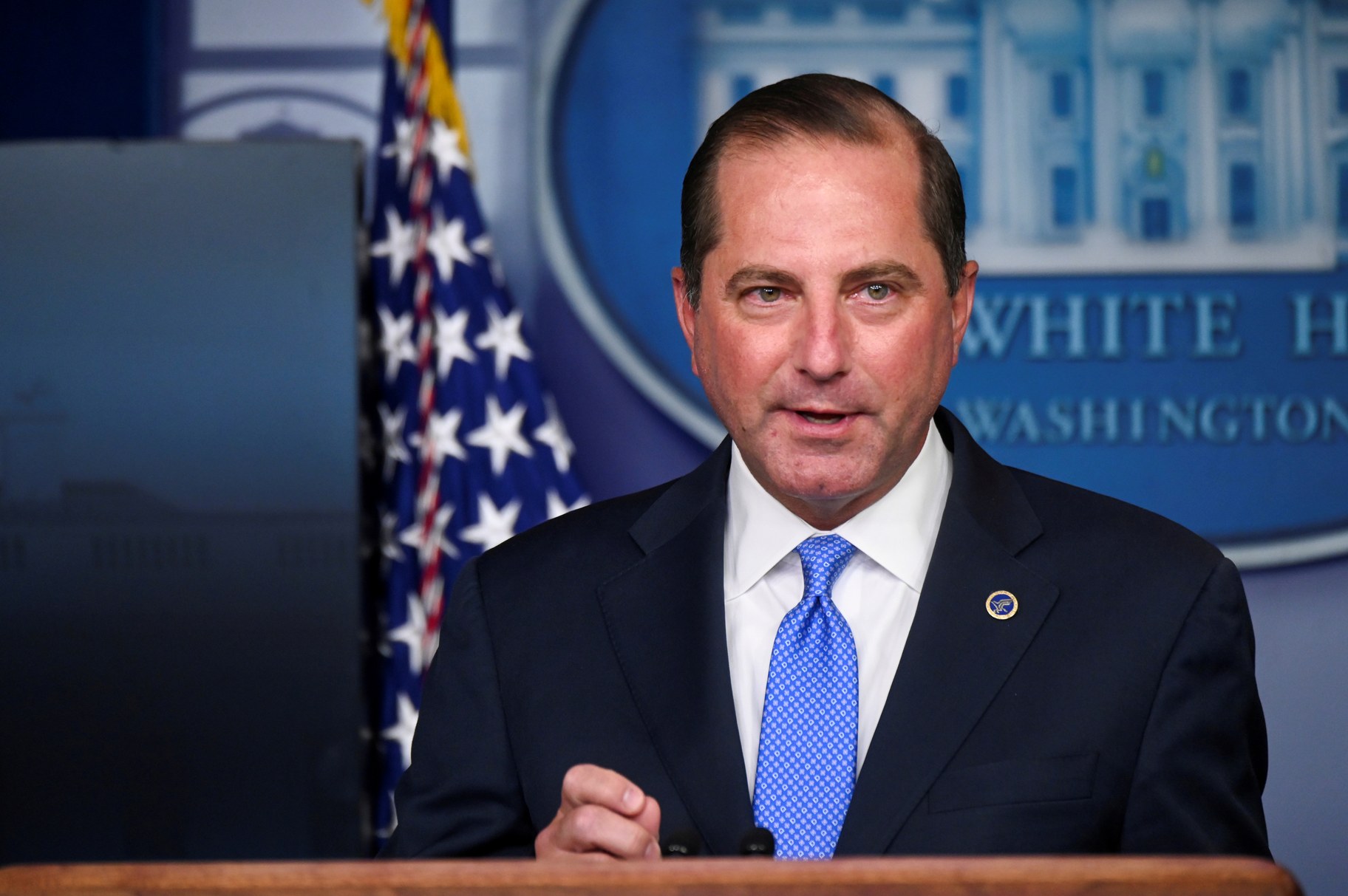 “We have a global pandemic and our own Department of Health and Human Services isn't allowed to even communicate with us, because they were saying something other than the narrative that the president wanted, which is that this whole thing is overblown and it's going to end quickly.”

Slavitt explains Deborah Birx, who coordinated the Trump administration’s COVID response, as someone in the White House who did what she thought was best in the situations she faced.

“I think the only decision that she could have made was to leave earlier than she did. And I think she probably thought about it continuously, and probably thought that she was in a better position to help by standing. And whether or not she's just telling herself that, or whether or not that's a reality, is something that people can decide for themselves.” 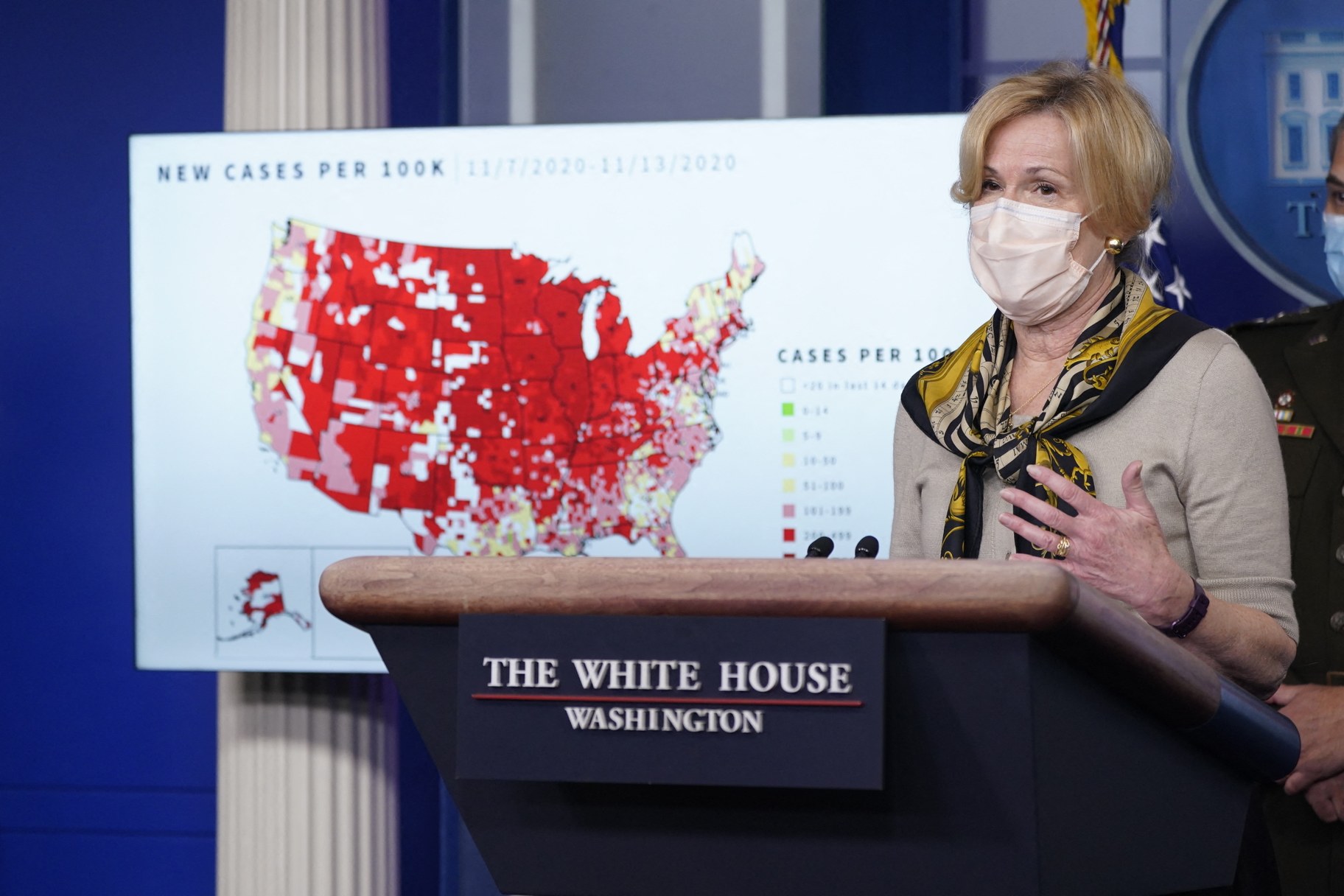 One of the missteps in the U.S. coronavirus response was the lack of personal protective equipment for health care workers and the general public. After seeing the reselling of N-95 masks and the PPE black market, Slavitt says he reached out to manufacturing company 3M to figure out where all the masks were going.

“Their response was incredibly disappointing. They said, ‘It's not our job to track where our masks go. And we're doing all we can.’ And I said, ‘Gee, that feels like there are millions and millions of masks out there, that if you took control, you could get those to hospitals and nurses and we could start saving more people's lives.’”

In response, he threatened the use of Trump’s Twitter to share what the company was doing. The president agreed and just days later, Slavitt says 3M changed their tune.

“They announced hundreds of millions of masks that had been going overseas were going to be sent into the U.S. and Trump was hailed as a brilliant dealmaker and 3M as a patriotic company. And my wife and I just laughed and had a drink.” 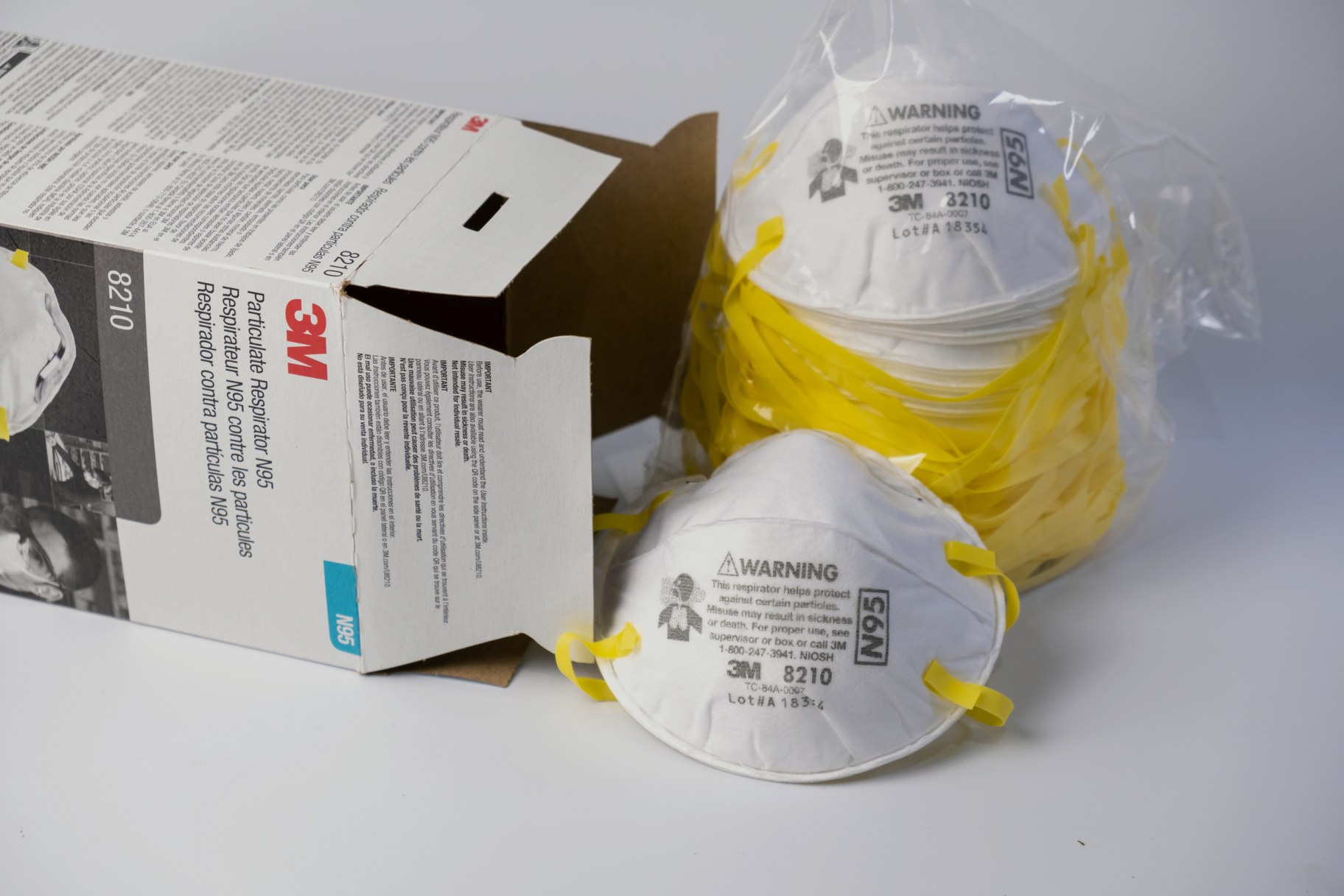 Slavitt says right now, there are two groups of unvaccinated folks: those who are complacent and those who are hesitant over the safety of the virus.

“This is a low priority. They don't feel very much at risk. Generally speaking, those are people who are under 25. More than 70% of people over 25 have now been vaccinated,” he says. “The second group of people are people to whom this is just, frankly, a much more considered decision. They have open questions that they want answered, they want to understand the long-term side effects.”

He adds, “They want to understand whether this might impact their fertility, they've got questions that can only be described as reasonable. And we make [a] mistake if we ostracize them and sort of consider them to be anti-vax.”

Much like the Great Depression or World War II, Slavitt says he thought the pandemic would help unite Americans. 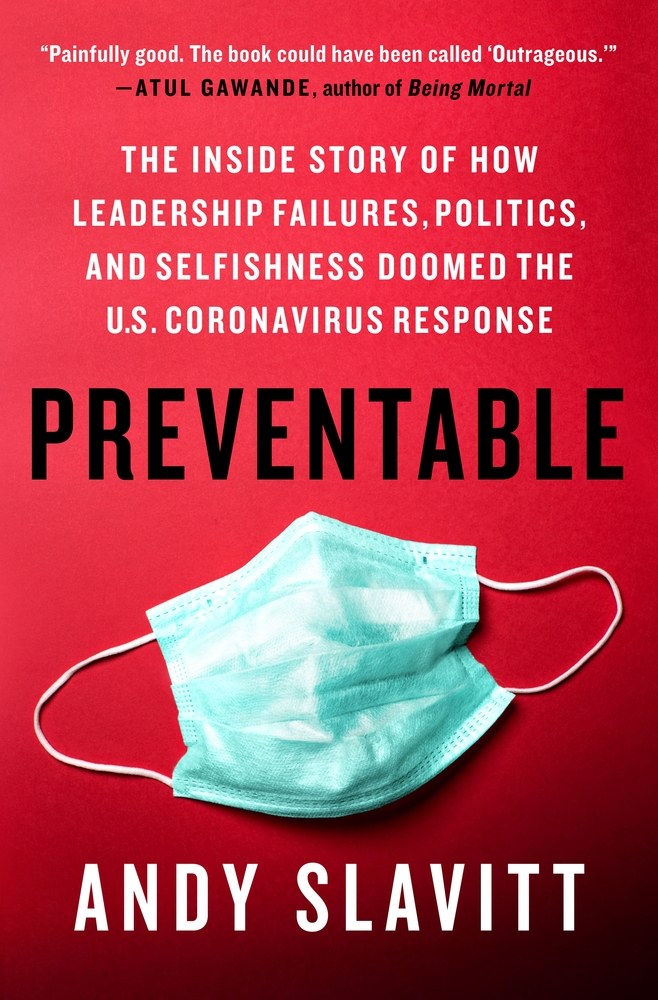 “Unfortunately, while we had some of those moments, we sort of fell apart. And I didn't count on many of the social dynamics that came to be. I didn't count on masks being politicized and this being used for advantage by politicians. And that was really disappointing.”

Now he says it’s up to society to solve the problems revealed by the pandemic. Those include families' lack of internet access for virtual learning and students’ reliance on getting meals at schools.

“If we don't tend to have those sorts of issues, then I have very low expectations about our ability to deal with another public health crisis,” Slavitt says. “Said another way, if we do invest in the things that will make us a better society, I think it gives me a lot more confidence that we will be able to support one another and deal with crises like this again better.”

How US leadership failed during COVID, according to former White House senior advisor

How the Trump administration chose politics over saving lives during pandemic, according to White House insider