This family lost their 26-year-old son on 9/11. Here’s how they processed grief differently Bobby McIlvaine, with his parents, Helen and Bob Sr., at his Princeton graduation in 1997. Bobby McIlvaine’s body was found in the wreckage of the Twin Towers. Photo by Danna Singer, courtesy of The Atlantic. Original print photo by the McIlvaine family.

Saturday marks the 20th anniversary of the worst terrorist attack in American history. A month following 9/11, President George Bush invaded Afghanistan after the Taliban refused to hand over the masterminds behind the murder of 3000 people in New York City, at the Pentagon, and in a field near Shanksville, Pennsylvania.

For the families who lost loved ones on 9/11, those scars never healed, or they evolved alongside our country becoming more divided and consumed by conspiracy theories.

Jennifer Senior has written a powerful cover story for this month’s issue of The Atlantic, profiling the family of Bobby McIlvaine, who was 26 years old when he died at the World Trade Center on 9/11.

She tells Press Play that McIlvaine was an ace student and athlete growing up in the Philadelphia suburbs, who played against Kobe Bryant in high school. He later attended Princeton University, where he became roommates with Senior’s brother on the first day of college. While at Princeton, he took two classes with writer Toni Morrison, who wrote his family two condolence notes later on because she was impressed with him as a student.

“I could go on and on. He was kind of a prototype for this civilized person that never got sort of put into full production. He was just this amazing kid,” she tells KCRW.

Senior decided to write the profile on the McIlvaine family because over the last 20 years, she saw firsthand how they were processing Bobby’s death and grieving the larger national tragedy.

Bobby’s journal became a source of anguish for the family since his death. That’s because his father gave it to his (Bobby’s) then-girlfriend Jen Middleton. Although she wasn’t his official fiancée, he had already purchased a ring to propose.

“His mother [Helen] was extremely upset by this and really wanted this diary, and could not believe that her husband gave it away when it was this final chance to hear the last words of her son. It was a chance to spend time in his company again. And it vanished. …. And I thought, it's been 20 years, maybe, maybe I can get it back, or they can see it. I had this kind of weird mission and purpose.”

Senior says that due to the personal information in the diary, Jen didn’t allow Bobby’s mother to read it. At the time, Jen was living with the family, in part because she couldn’t bear to live alone in the aftermath of 9/11, and the diary became a major source of tension in the household. So much so that it all came to a head one night.

“There were many discussions about this diary these two women were having, because Jen was living under their roof and going to work every day from their house in suburban Philadelphia. And it got very tense and it ended in total acrimony with Jen slamming the door and getting into her car, bursting into tears and never seeing the McIlvaines again.”

In July 2001, McIlvaine just started a media relations job at Merrill Lynch. He was slated to help a colleague set up for a presentation at Windows on the World, a section located on the top floors of the North Tower. But when his body was recovered, he was found near the outer edges of the World Trade Center.

“The assumption was he went up, he got his breakfast, he set up his colleague, and he was on his way back because they recovered him at the periphery of the site,” Senior explains. “He must have been clocked by burning debris, or [got] turned around when the building started to go. Nobody knows what he was doing there. But he was clearly out of the building.”

She notes that the circumstances of Bobby’s death prompted “what if” scenarios in the minds of others, including his father Bob Sr.

“This is the tormenting counterfactual that every person does. Did he stop and get a cup of coffee at a cart? If he had walked to the left, if he'd walked to the right, if he saw that the usual path back to his office was congested with too many people, who knows?”

She adds, “‘Who knows’ became a source of torment to his father in particular. He didn't know what his son was doing in his last final minutes. Was he suffering? Was he terrified? He had this fantasy, Bobby's father, that if he’s been with him, he could have protected him, which is a very paternal kind of fantasy. But this, I think, is on everyone's mind. Anyone who loses someone, they wonder about those last minutes. … They have this kind of magical thinking where they try and undo it.”

Senior says Bob Sr.'s line of thinking unraveled to a point where he started to embrace 9/11 conspiracy theories. It started as he was trying to find an explanation for Bobby’s death and severe injuries, which included near decapitation and the loss of his right arm. After reading the medical examiner’s report, he became convinced explosions happened at the Twin Towers.

“He decided, based on what he read, that Bobby could not have been running away from the building, that he had to have been inside the building and blown backwards from an explosion. And that the U.S. government had embroidered the building with explosives, and that this was the only thing that could explain the savage injuries to Bobby's body.”

At the same time, Senior says he was following the 9/11 Commission hearings and wasn’t satisfied with the testimonies he heard and felt like the U.S. was hiding something. Bob Sr. also believes that 9/11 attacks were prompted by a conspiracy involving the illegal requisition of Japanese gold and that the explosions were a cover-up.

The rest of the family’s reaction to Bob Sr. embracing conspiracy theories is mixed. Helen, Bobby’s mom, largely supports her husband. “She supports the man and not necessarily the arguments. She has said to me, ‘I wish he'd stick with the buildings.’ I think she's listened to him on the phone enough, and overheard enough stuff that this was a controlled demolition. .. She's persuaded by it. But again, she's not an activist.”

Senior says Jeff, Bobby’s brother, has largely sidestepped the topic. “Jeff is not interested in exploring this question to him. I mean, Jeff's feeling is like, ‘My brother's gone.’ If this is what he wants to do for the rest of his life, it's fine.”

Embracing or “starving” grief, and “life loves on”

Senior says each parent has processed their pain differently. Bob Sr. has fully embraced the grief. “He inhabits it. Everyday for him is September 12. He's got a mystery to solve. And he's got U.S. malfeasance and abuses of power to expose.”

Helen, on the other hand, didn’t want to be a victim. “Helen decided she didn't even want to go to the same grocery store for the first 15 years after September 11. Because she didn't want people making halting, awkward, fumbling conversation [and] issuing condolences. … She didn't want people to sit there and pity her openly. She was starving her grief. She really wanted people to just kind of believe that she was okay.”

The family also hung onto the phrase “life loves on,” which they attribute to Bobby, although Senior notes that she wasn't able to find any indication he had ever used the phrase.

“It became this organizing model for their grief. … Helen was given an engraved bracelet with this motto on it, and she wears it all the time. And Bob Sr., his father, has it tattooed on his arm.” 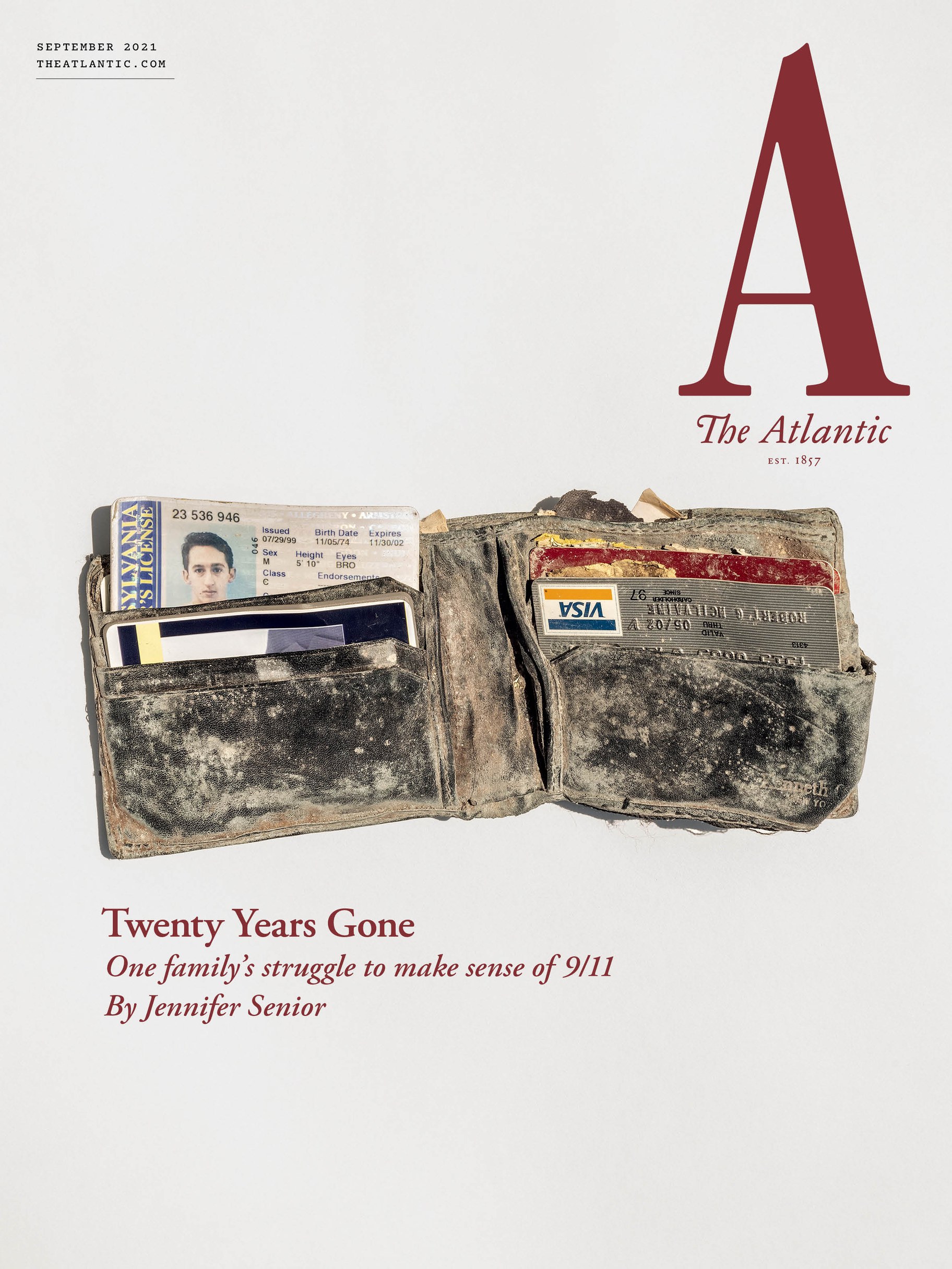 Bobby McIlvaine's wallet is the cover image for Jennifer Senior’s story on how the family processed grief after their son died. Image by Danna Singer, courtesy of The Atlantic.

Today, the McIlvaines still have Bobby’s wallet in a box. Senior says it smells like 9/11.

“That World Trade Center dust was its own scent, and it just whips you right back to that time. If you smell it, it's just this accurate combination of ‘I don't know what it is.’ ... A pulverized building and all the electrical and gases and raw materials of a building that I don't know what it was,” she describes. “It's singular and super like acidic. It makes your eyes burn. I think I said you could smell it in your eyes.”

So what happened to the diary?

Through the course of her interviewing, Senior says she eventually met Bobby’s former girlfriend Jen, who turned out to be a nice woman.

“The second I showed up at her house, she couldn't be more gracious. She's so warm. She gives me this giant embrace. And she's got everything that was of any significance to her that Bobby had given to her, including that diary. She had it sitting in a canvas bag, ready for me to look at. So she was at that point very far from withholdings, she was quite open.”

After that meeting, Senior says Jen was willing to share the diary with the McIlvaine family.

“[The diary] first brought out everyone's worst self. And then it brought out everyone's best self. [Jen] was the first to admit the ways that she had made mistakes when it came to handling that diary. And when Helen finally got to read it, Helen was the first to admit that she may have made some very faulty assumptions about who it belonged with and what was in it.”

“Helen had this kind of epiphany, ‘Oh, my God. He's not mine. He's hers.’ … I don't think that she quite understood the intensity of that relationship. Maybe until that moment. It's hard not to. Bobby was so young, he was 26, that I think the bulk of her memories were still of him as a little boy.”

Critics review “The Card Counter,” a revenge thriller starring Oscar Isaac as a gambler and veteran who helps a young man reckon with his past; “Language Lessons,” starring...

This family lost their 26-year-old son on 9/11. Here’s how they processed grief differently

Press Play speaks to Jennifer Senior about her moving story that profiles family members of Bobby McIlvaine, who was 26 years old when he died at the World Trade Center on...