The Indigo Girls have been intertwining politics and songwriting since they began making music 35 years ago. The folk-rock duo, Amy Ray and Emily Saliers, just released their 15th studio album called “Look Long.”

KCRW: Your breakout song “Closer to Fine” came out in 1994. What were you talking about in that song, and what in that song do you still talk about today?

Emily Saliers: “I wrote that song sitting on the front porch of a very rustic cabin on vacation with my family in Vermont. And it must have just been post-college or at the end of college. And I was just thinking a lot about where we go to get answers … or how to make ourselves feel better or just how to understand things.

And I just started listing the litany of places and things that people turn to ...  like working out, and going to the Bible, and looking to the beauty and wisdom of children. Just about every place that that song talks about seeking an answer is still applicable to today.”

You could have gone into academia and you didn't. What did it mean for you to start performing?

Saliers: “Amy and I already had like a little fledgling career going on. We were a bar band in the mid-80s. And we used our time at Emory University … as a springboard for our nascent career. And I was looking at grad schools, and I wanted to be an English teacher, and the world of academia was very comfortable to me.

But Amy was hanging up all the posters and doing all the work. And she's kind of like, ‘Well do you want to do that or do you want to do this? Because we have this thing going on and it's working.’ … That day, I just made that decision. And from that point on, we just ended up marrying our music with activism and just being in a place that was very, very natural and comfortable to us.”

Amy Ray, have you always been politically active?

Ray: “When I was very young before I met Emily, I was raised in the church, and part of that meant tithing and giving to your community. And I think when Emily and I first started playing, it was kind of the thing that we just did naturally ... get together to raise some money for a soup kitchen or HIV, Meals on Wheels kind of service, or we would do like stuff for Greenpeace.

We weren't completely politicized, and we weren't really aware of gay rights, or feminism even, or race stuff. We were very young in our politics — very different from kids now. We were very ‘just trying to do the right thing,’ but we didn't quite know what that was at the time.

So we just slowly grew with our audience. When we started doing activism with Native American tribes and started Honor the Earth with Winona LaDuke, [she] really helped formulate our activism.

I think spending time with the Zapatistas has really helped. I think from that point on, which was like the early 90s, we really shifted and really understood what we were doing, and targeted grassroots and community-based activism, and started to understand the dynamics of that better.”

Did you consider making music without incorporating political activism?

Ray: “When I was in college, I even thought about going to theology school. … I was either going to be a forestry person or theology. … My kind of perspective in life was just this idea that whatever you're doing, it has to involve engagement with the community in some way of service.”

The song “Muster” from your new album was inspired by the activism that followed the Parkland shooting?

Ray: “It was inspired by that one town hall meeting. … Politicians went, and the parents went, and some kids went. At first, that kind of meeting can feel like going through the motions, is anything ever going to change?

But the … youth movement that grew out of that, which I think is akin to Black Lives Matter, and akin to what's happening now and climate change movements, was so energized. … I saw what they were doing, and I just felt like we really screwed up, the adults right now. And we need to make it up to these kids.”

Do you two ever disagree over the political part of your message?

Ray: “We hash things out sometimes. We might feel, at first, slightly different about something, like whether to endorse a political candidate or not endorse candidates at all. Or whether to post a picture from a Black Lives Matter rally or not. Because it might seem white performative. Or just those kinds of things where we're struggling with it within ourselves as well. It seriously helps us figure out if we're going in the right direction, because we take it very seriously, like the idea of being white people and trying to work in all these different social justice movements.” 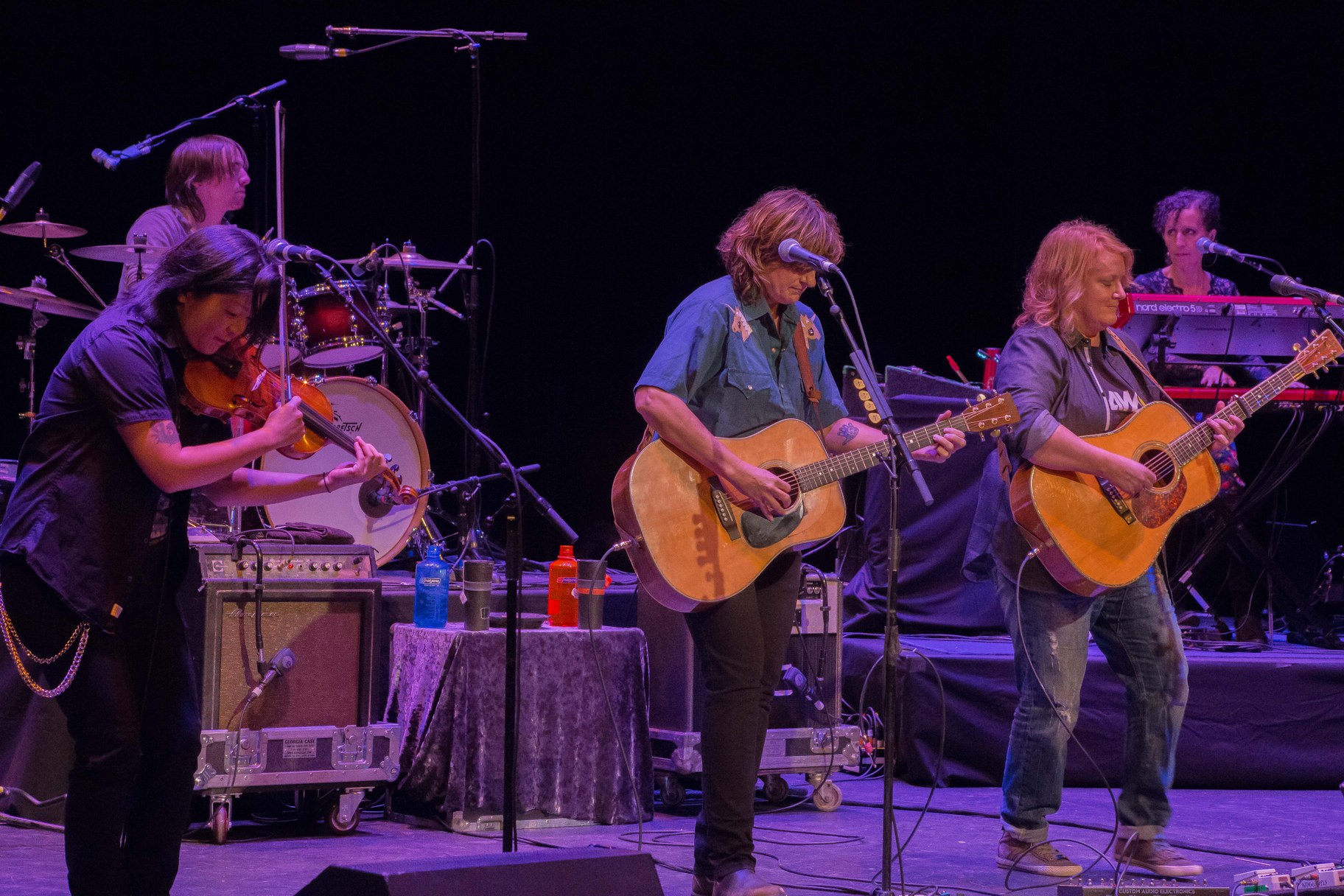 Do you worry that you’re two white ladies taking on a particular cause that's not your cause?

Ray: “We're extremely cognizant of that. For instance, when we started Honor the Earth with Winona LaDuke, there were other indigenous organizations involved in that. We weren't members of the board at that time. We were just there to learn. We were there to be a liaison between Indian communities and non-Indian communities, and to play benefit concerts, raise money and awareness, and that sort of thing. So one of the tools that Honor the Earth had, we were one part of that. So we weren’t going in saying, ‘Oh yes, we understand this. And we have a voice in this for change.’

Now as the years have gone on, we do have a place on the Honor the Earth board, but neither one of us wanted to take it. And still we always defer to the voices of the people who are living through the issues in their communities.

What's going on now with Black Lives Matter and Black justice movements in this country is that we are extremely humbled and honored to learn from Black activist leaders. There is no way we are going to be spokespeople for Black justice in this country. We are going to take the lead from our educators, our Black activist leaders. And we just want to be — even if the word shifts at this point — I'm going to use the word ‘ally.’ You can guide us, but we're also going to figure out what we have to do as white people amongst ourselves to stop this terrible racism and violence that's been happening for 400 years now.”

How much does living and growing up in Georgia affect how you view the world?

Saliers: “Many things become crystallized living in Georgia, which is that out of a mess comes a bright future from communities and leaders like Stacey Abrams, and my Congressman is John Lewis. ... We have all these wonderful leaders and activists who see the problems inherent in Georgia.

I feel like obviously the problems of racism coming from the South where slavery started, why the South fought the Civil War to protect their economic way of life, which was all about slavery. So just a horrific past.

But then the birth of the civil rights movement, and Martin Luther King Jr. and all the figures that came out of the South, and many who came out of Georgia. So it's a real, real mix of sadness and awareness and pride and fortitude.”

Emily Saliers, talk about one of your new songs called “Country Radio.”

Saliers: “It's really the way I felt [for] a long time about trying to fit my life. Some of those times, like during the 70s or 80s before I even knew I was queer, and then up until I was 50 years old listening to country radio and feeling a bit of sadness and wistfulness because I could not fit my own queer life story into these songs that were written by men and women about relationships between men and women for the most part. And so that gave me a feeling of otherness that as a gay person is a quite a familiar feeling.”

Amy Ray, I guess that's something you can relate to as well.

Ray: “I had a lot of self hate when I was discovering my queerness and having gender fluidity issues and stuff. So I can really relate to that kind of place inside you. ... I was like, ‘This is who I am.’ I relate to the guy that wrote this song about the girl. I'm not going to relate to a girl that writes a song about a guy necessarily, except that I want to be that guy probably. So I kind of just took that in stride and didn't really struggle against it ... because I think my gender is so masculine, and I imagined myself in that role, and before I knew how to articulate it.

I didn't have that sense of like, ‘I need to have somebody writing gay songs for me.’ But I think it's a brilliant song. Emily didn't want to put it on the record at first. And I told her it was the hit. .... We had to record it.”

Emily Saliers, why didn't you want to put “Country Radio” on the new album?

Saliers: “I had a feeling it was the weak song in the bunch. I was wrong. I'm glad that Amy said we’ve got to do that song. And it seems that there's [sic] a lot of people out there who feel the same way that I did inside.”