Betye Saar at the Craft and Folk Art Museum in LA, 2017. Photo by Gina Pollack.

A new exhibit from Los Angeles artist Betye Saar opens this weekend at LACMA. It’s called “Betye Saar: Call and Response." It looks at the 93-year-old artist’s entire career, including the small sketches that would become her finished works. Saar’s art is often made out of objects she finds at flea markets and junk stores. All her pieces are constructed to tell the story of race in America.

In 1972, Betye Saar made her name with a piece called "The Liberation of Aunt Jemima." She re-configured a traditional ceramic Mammy figurine. Those are the curvy black women wearing aprons and scarves on their heads -- the unthreatening domestic. But Saar’s Mammy held a pistol in one hand and a shotgun in the other. 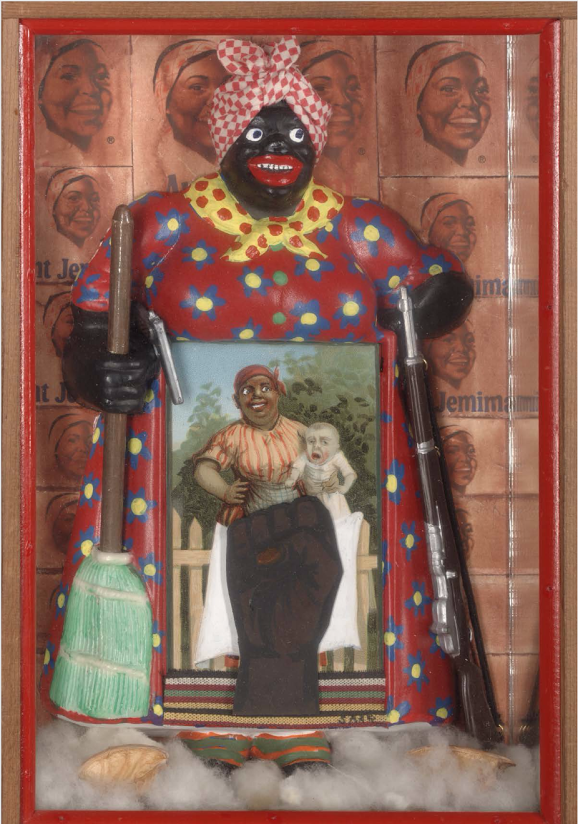 Saar's "The Liberation of Aunt Jemima," 1972. Credit: Collection of the Berkeley Art Museum.

Saar was born in Watts and raised in Pasadena. She’s light skinned – a mix of Black, Irish, and Native American heritage.

In an interview with Press Play two years ago, when Saar was 91 years old, she said race wasn’t a big part of her identity when she was young, but as she grew older and the Civil Rights movement started, she began to recognize that race played a role in her life. That revelation became the backbone of her work.

A Loss of Innocence. Courtesy of the artist and Roberts Projects, Los Angeles.

One of her pieces focused on how children encountered racism. Saar took an antique lace dress that would be worn for a christening and embroidered it with derogatory names like pickaninny, nigger baby and tar baby. The dress hung from the ceiling over a small framed image of a black child.

Saar said she designed the installation to symbolize the loss of innocence that children experience when they are exposed to racist slurs.

“No matter how much food you have or how much beauty surrounds you, there is still the ugliness of racism,” she said.

Saar said she was young when she was first called “nigger.”

“I remember talking to my mother and asking her ‘Why did they say black nigger?’ And this was my mother’s way of describing racism: ‘Children are like flowers in the garden, they’re all different colors. And you’re just one color and sometimes people don’t like that color. But that’s not who you are.'”

At 91, Saar has been reflecting on her life’s work. “You know, when you get that age, you kind think, well, what was I here for? What have I contributed? And I think that art is my vehicle to express the emotions that I feel about racism," she said.

happen, except that I know that this is my last decade. I don’t really envision moving into the 100s. I don’t particularly want that. Because I want to be able-minded. I want to, you know, have a good mind and still make things and enjoy my family and everything. So I just live for the moment, and I plan next week, but not too much further."

“I’ve just got so much stuff and so many ideas, I don’t know how I can get it all done,” she said. “That’s what makes me happy. Finding an object and putting it together with two or three other objects and saying, ‘This is going to tell a story.’”