Hip-hop group The Fugees reunited on stage in New York on September 22, 2021 — for the first time in 15 years. The performance was to support Global Citizen Live, an event calling on world leaders to take action on climate change and poverty. The group will be heading out on a world tour starting in November. Photo by Theo Wargo/Global Citizen.

The 1990s hip-hop group The Fugees — Lauryn Hill, Wyclef Jean, and Pras Michel — announced this month that they’ll be going on tour again for the first time in 15 years. It’s in celebration of their classic record “The Score,” which was released 25 years ago this year.

Since its release, “The Score” has gone platinum seven times, and won the Grammy for Best Rap Album in 1997. Today, the record is still ranked as one of the best selling albums of all time. And its scathing lyrics about racism, poverty, and displacement remain just as relevant today.

Music journalist Candace McDuffie wrote about the album’s anniversary for Consequence of Sound. She says The Fugees came together to make the album at a special moment in hip-hop history in 1996.

“They're Haitian, they're Haitian American, they're American. They're Black, coming together to make such a creative and transformative record,” McDuffie tells KCRW. “That's the time where Tupac had ‘All Eyez On Me.’ Jay Z's first album ‘Reasonable Doubt’ came out. You had Lil’ Kim and Foxy [Brown] debuting. So for [The Fugees] to come out with a female MC and for her to be as vicious and as poetic as she was in a time where you don't see a lot of that, it was wonderful. And their chemistry is just undeniable.”

The trio first started making music in the early 1990s, but it wasn’t until “The Score” that they experienced major success.

The band’s name is derived from the word “refugee,” and McDuffie explains it was a source of pride for them.

“In 1986, Wyclef [Jean] did an interview in Vibe, and talked about how everybody seeks refuge, not just immigrants. But the fact that they took that name on and confronted immigration issues [that] are still pertinent today speaks to how fearless they were when it came to dealing with political issues with their platform.”

Today, she notes the band often performs with Global Citizen and is known to be vocal about Haitian-related issues, including the recent political turmoil in the Caribbean country. 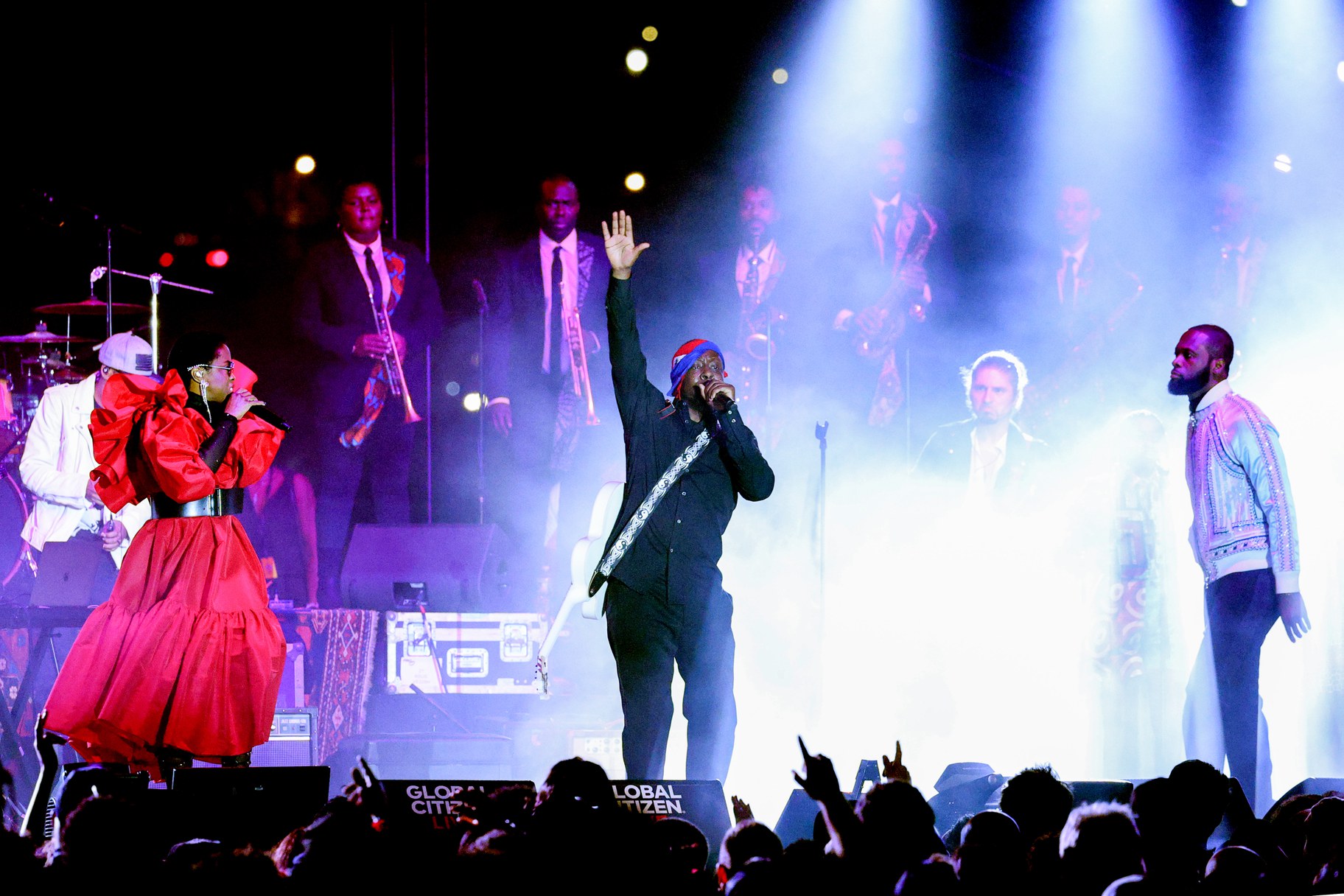 “It represents the diversity of black art of Black people overall — to blend Caribbean sounds with pop, with reggae, with R&B [and] to sample everybody from Enya to Roberta Flack,” says music journalist Candace McDuffie about the musical stylings of The Fugees. Photo by Theo Wargo/Global Citizen.

The musical stylings of The Fugees

McDuffie says The Fugees pull much inspiration from their own culture and find a way to make it feel fresh.

“It represents the diversity of art of Black people overall — to blend Caribbean sounds with pop, with reggae, with R&B [and] to sample everybody from Enya to Roberta Flack.”

The band’s addition of freshness to music helped make their cover of “Killing Me Softly With His Song” so popular, she adds.

“It feels more modern than the original … ​​like Lauryn’s really singing her heart out for that song. You have Wyclef on adlibs that one time, two time, and it just felt fresh and new. And it was hip-hop. Even though she's singing, you can feel the hip-hop undercurrent of it, which made it such a popular hit not just in America, but around the world.”

Following her success with The Fugees, Hill released her groundbreaking solo album “The Miseducation of Lauryn Hill.” But McDuffie says the pressure of being an artist became too much for her. She also pivoted to focus on her own life, including raising a family.

“There [was] so much, I think. The youth. The relationship with Wyclef. Having children [and] raising a family. … The pressure on Black artists, it just became all too great. And sometimes you need that time away from the spotlight [to] just focus on yourself and stay true to who you are in the craft.”

The longstanding legacy of “The Score”

McDuffie says that despite much of the album being a symbol of positivity and upbeat energy, it’s also very emotional She uses the example of “Manifest/Outro,” which touches on many subjects, including suicidal ideation.

“It’s just so so personal. You know [Lauryn Hill] was going through it to even write those words down and then to perform and recite them the way she did. It's just kind of unbelievable. But I think it makes it worth it. I think it makes the art worth it when you see artists take these risks and show such vulnerability.”