Protesting and rioting in the Fairfax district of Los Angeles. They are demonstrating over the death of George Floyd, who was killed by police officers in Minneapolis, Minnesota. May 30, 2020. Photo by Ted Soqui.

Longtime photojournalist Ted Soqui has been documenting the clashes between law enforcement and Angelenos protesting police violence, racial and economic inequality, and the police killing of George Floyd. 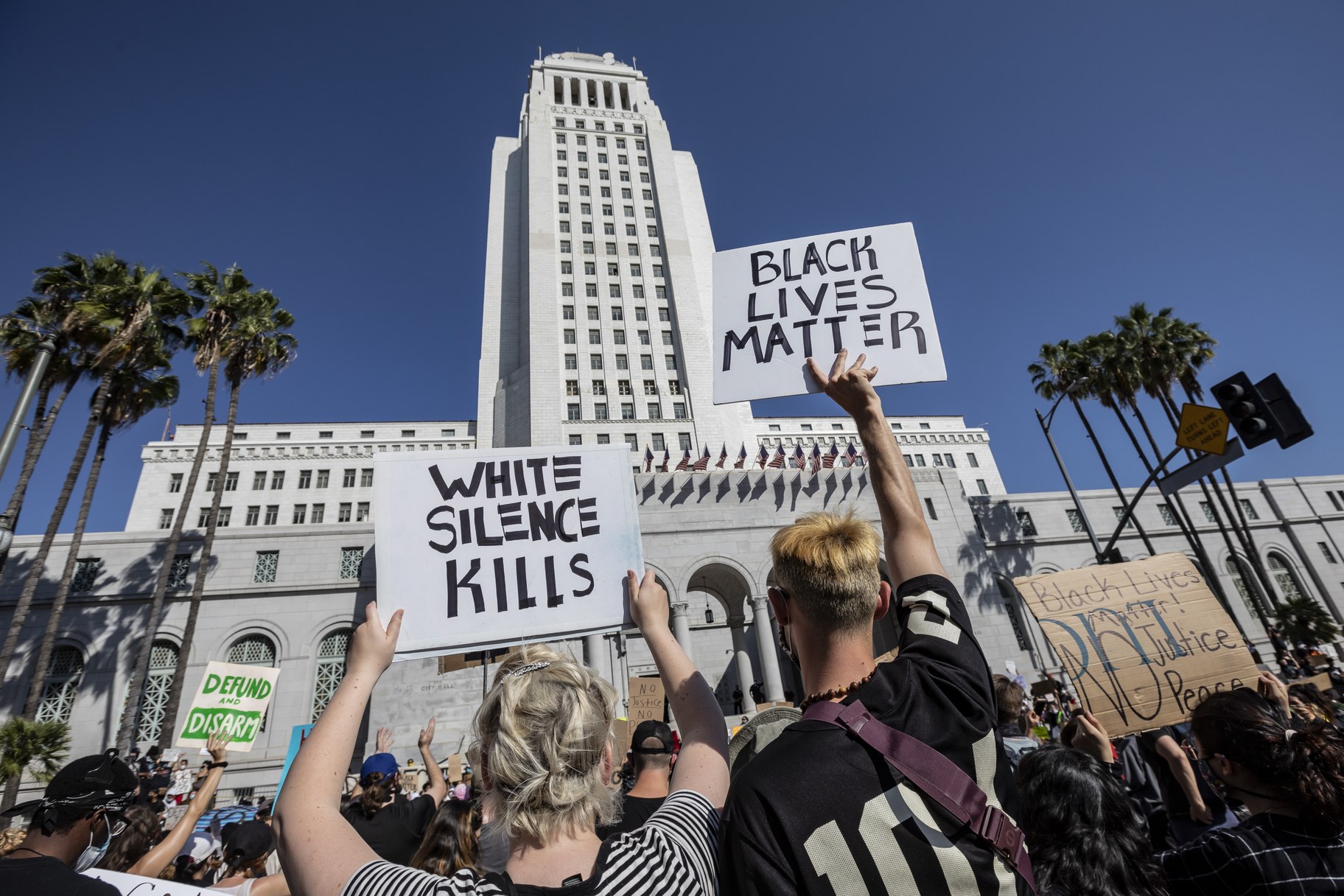 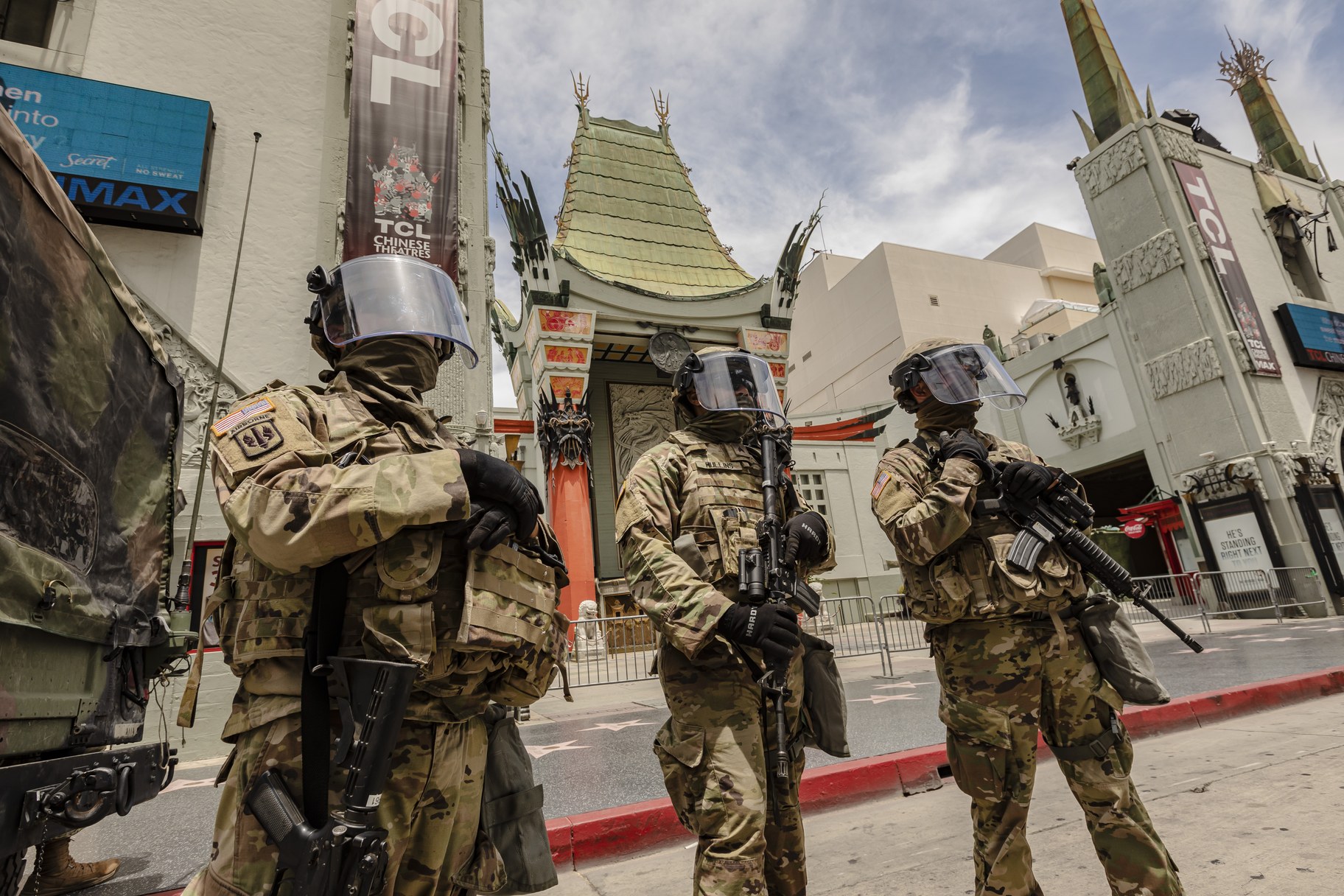 California National Guard deployed on Hollywood Blvd. to protect the tourist areas from looters and rioters. A large protest in support of George Floyd, who was killed by Minneapolis police, was also in the area. June 2, 2020. Photo by Ted Soqui.

The images are reminiscent of the 1992 Rodney King riots, which Soqui also photographed. What stands out from those riots — and isn’t present today — is a tremendous amount of fires.

Soqui tells KCRW that the giant smoke columns guided him on where to go and what to photograph. (In contrast, today he uses his smartphone and social media as a guide.) 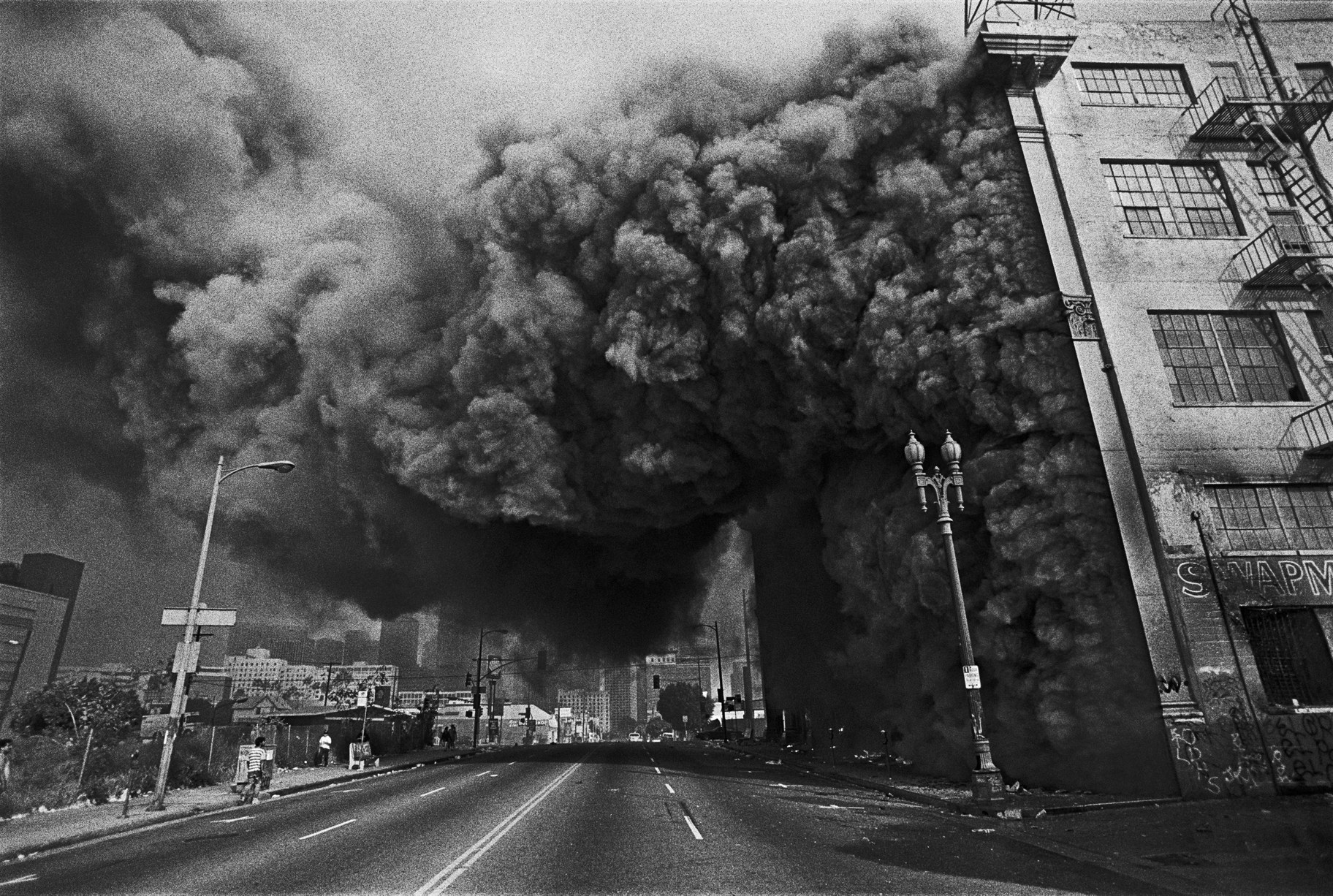 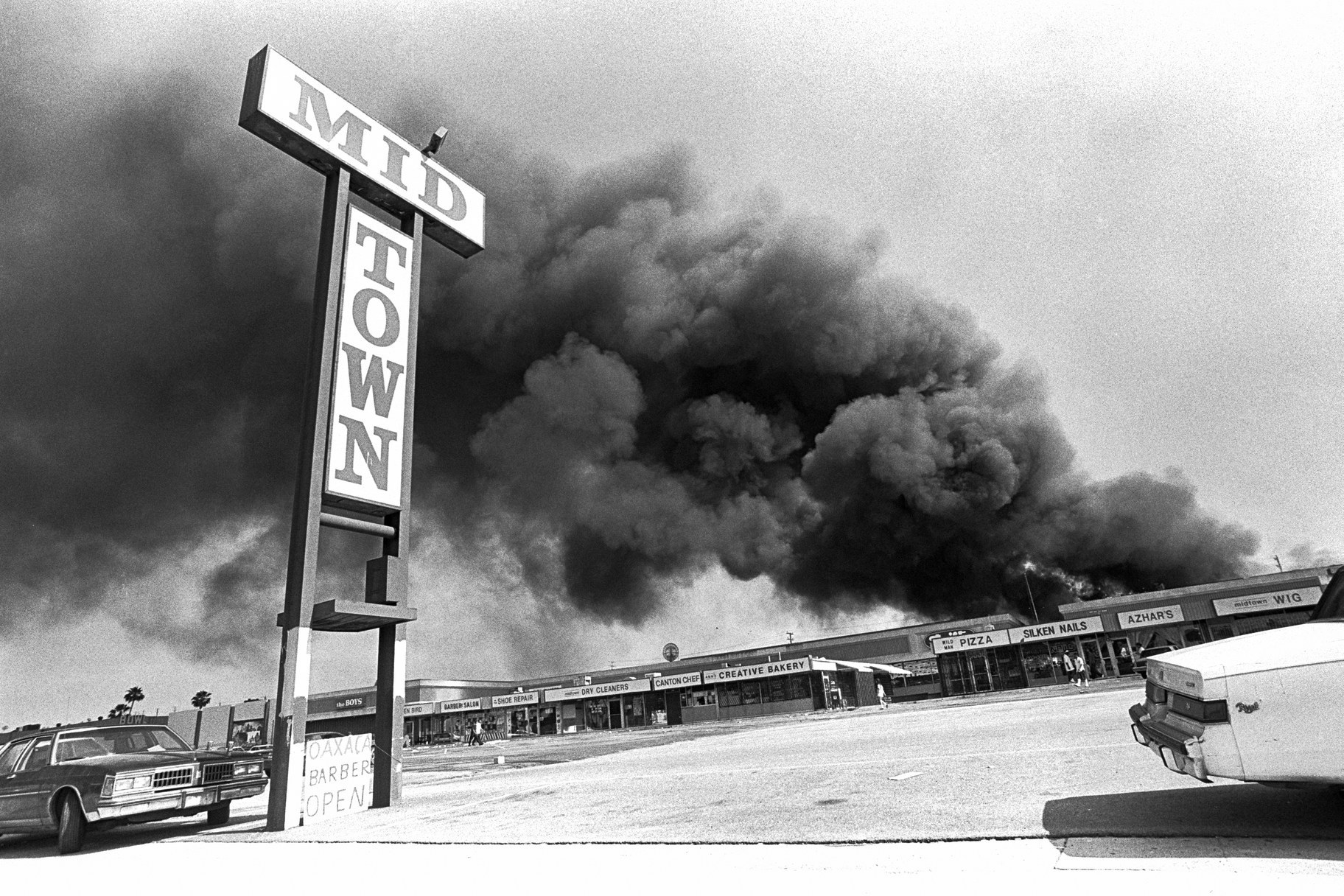 “For a brief moment, it felt like the end of the world. People were very upset at the verdicts that came down in ‘92. Some people say they [verdicts] were expected. I personally didn’t feel they were expected to be not guilty. And what happened was a direct response to that,” Soqui says.

He adds, “Even now, people are talking about, ‘Well finally they arrested the officers.’ I’m like, ‘Well arresting officers is one thing, but convicting them is completely different.’ And that’s another fear and anxiety that I have. … Are we looking at another uprising after these trials?” 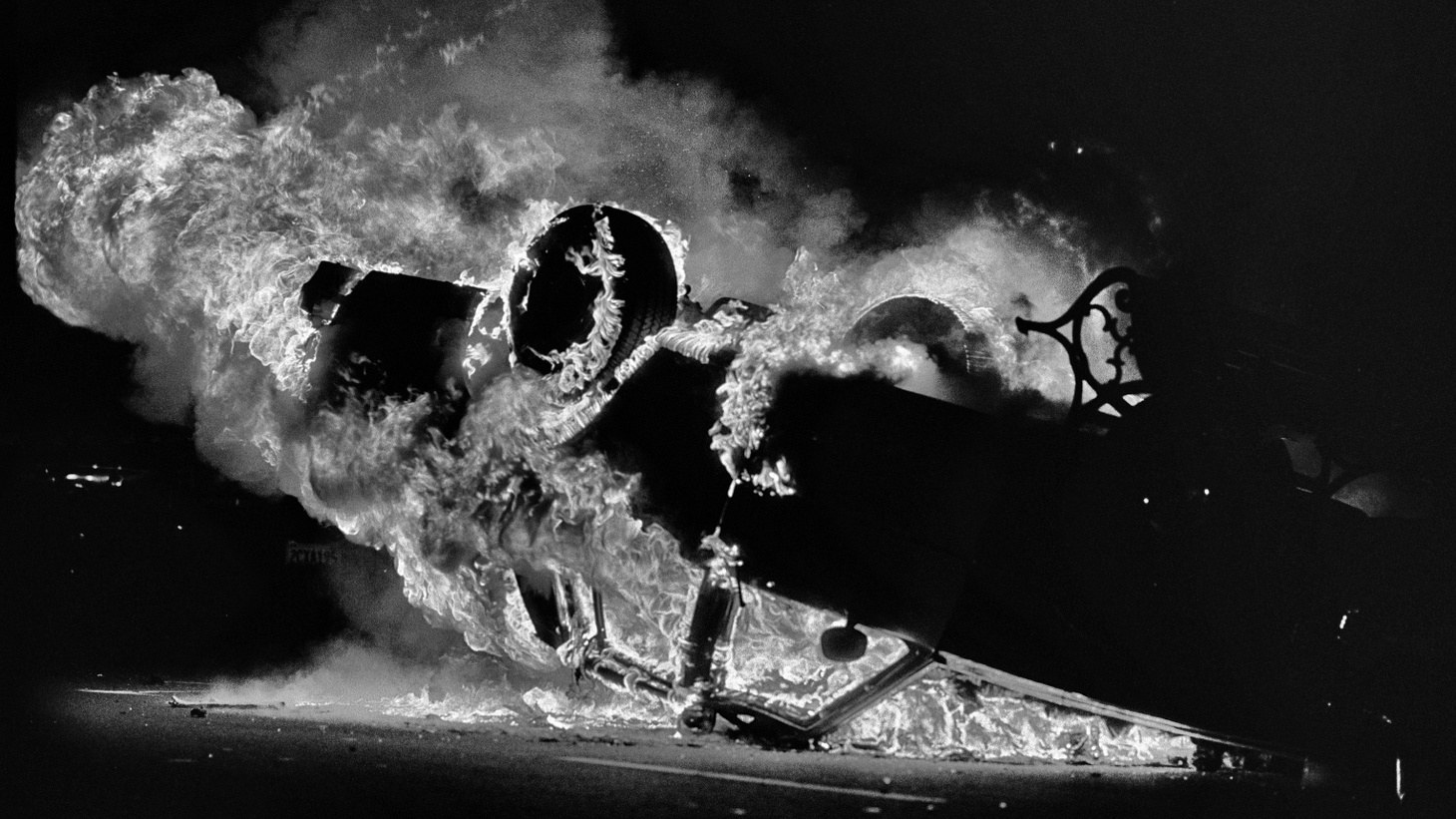 A Los Angeles Police Department cruiser was overturned and set on fire by rioters in downtown Los Angeles. April 29, 1992. Photo by Ted Soqui. 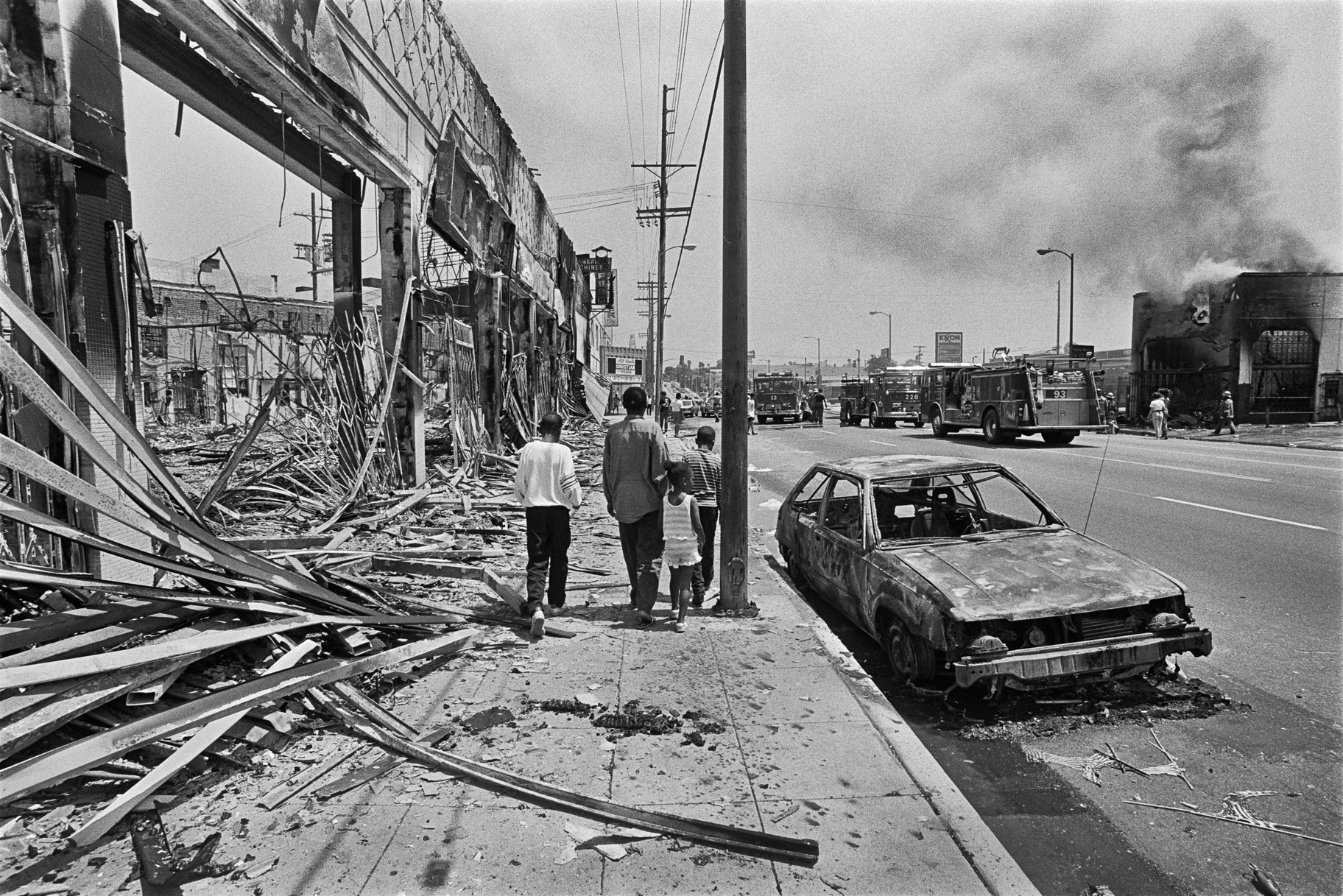 A group of children walk by damaged businesses in South Los Angeles, 1992. Photo by Ted Soqui.

Twenty-eight later, Soqui is still working nonstop to document protests. His images now are in color instead of black and white, digital instead of film, and they’re set in wealthier neighborhoods. Protestors specifically targeted some upscale white parts of town.

One photo that’s caught a lot of attention shows a group of men standing on top of a burned and graffitied police car. 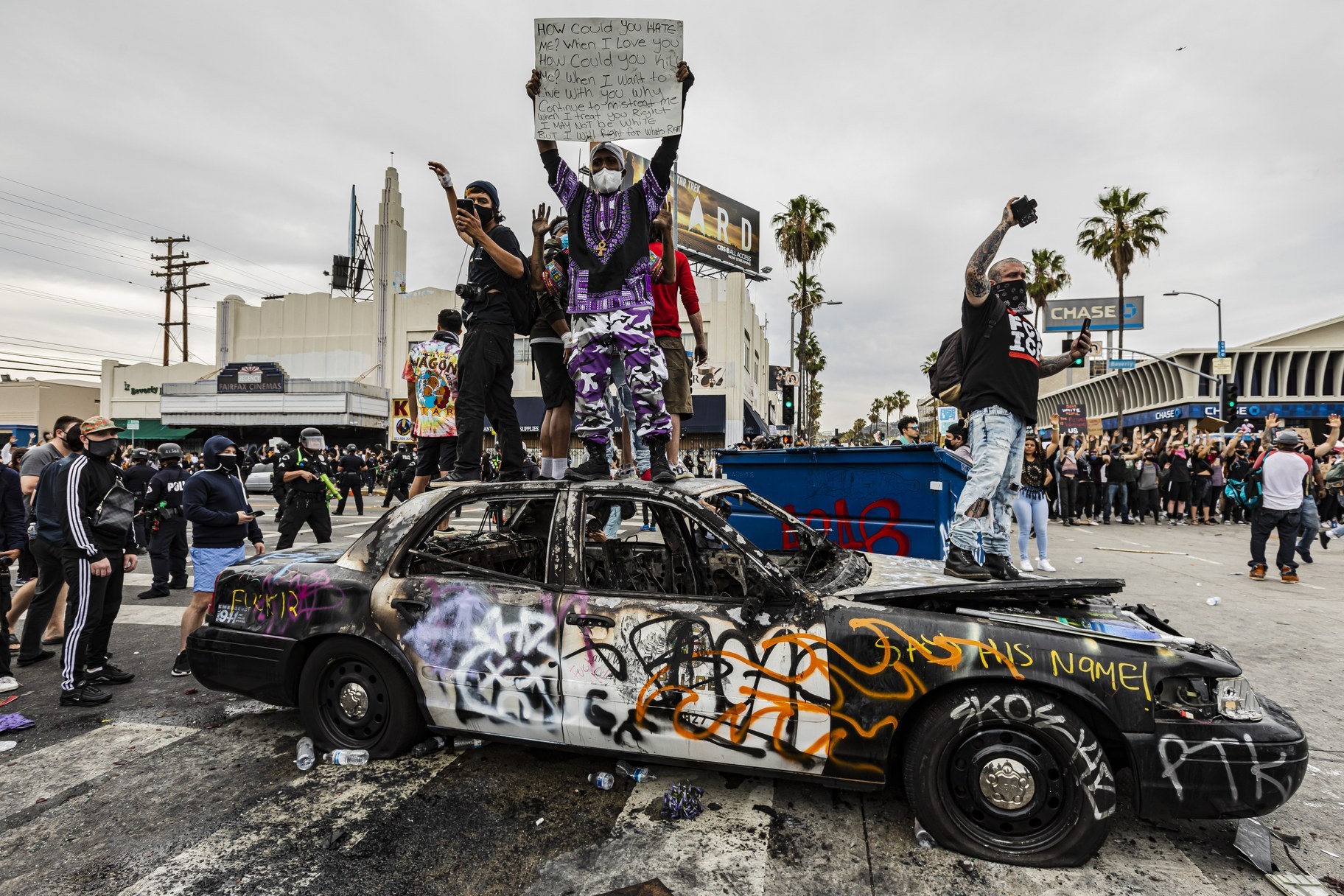 Peaceful protests on May 30, 2020 turned into a spree of vandalism and looting in Fairfax district of Los Angeles. Police fired rubber bullets at demonstrators. Photo by Ted Soqui.

“I've never seen anything like this. [It’s] something you'd see maybe in France or a country about to undergo civil war. And it felt like that to me. For a brief moment, you had lines of protesters facing off with lines of police, exchanging rocks and bottles with tear gas and rubber bullets,” he says.

He continues, “They [police] were being overwhelmed and left their posts and had to retreat. And as they retreated, left behind their police cruisers. And at one point, there were 14 police cruisers left behind, and every single one of them were thrashed beyond use. … One was set ablaze, and afterwards, the demonstrators would overtake these areas and stand upon the cars and graffiti them. I don't want to call it victorious, but it was like, ‘This is our city as well, and our rights have been overwhelmed, and this is what it feels like.’”

How does Soqui see his role as a photojournalist? How does he choose the angle and framing of these protests?

Soqui worked at the LA Weekly for 25-30 years, and he says the staff worked on stories about people whose rights were abused, who couldn’t get their messages out.

He describes his mandate: “Who hasn't had their voice spoken for?” 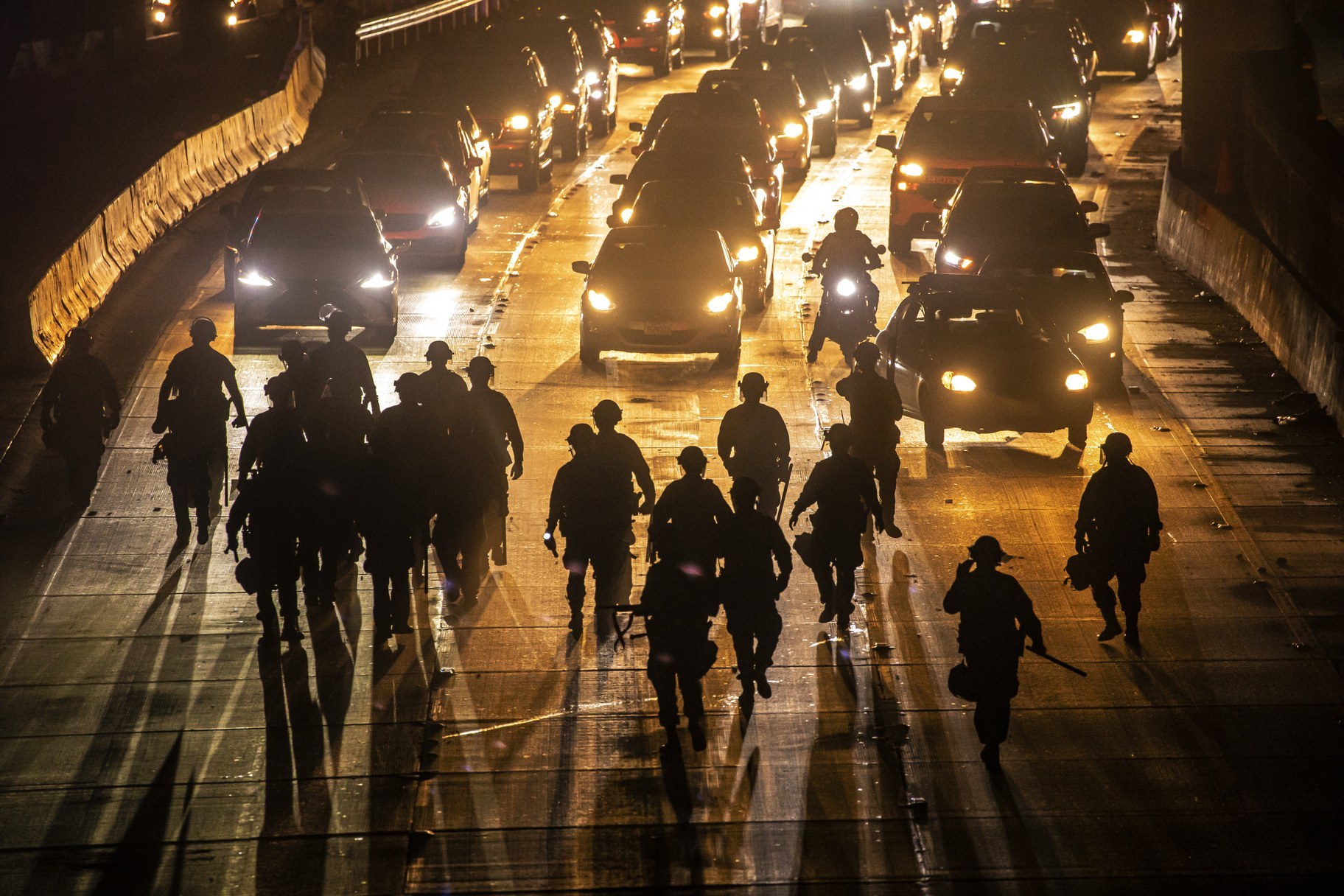 On May 29, 2020, demonstrators in downtown Los Angeles took over the 110 freeway and damaged several businesses in the area, May 2020. Photo by Ted Soqui.

And when it comes to documenting the police, he describes his approach:

“I will often go up to the police or National Guard and chat with them … find out where they're from … and take portraits of them. And I'll often look at their eyes when I'm in the middle of a situation and see what's going through their minds as well,” he says. “Because most of the law enforcement are civilians and not military. So these are people's friends, family. Not all of them are beating and killing people. But … there’s a huge problem with that. And as we've seen, these protests have welled up and brought it to light, and it's a good thing.” 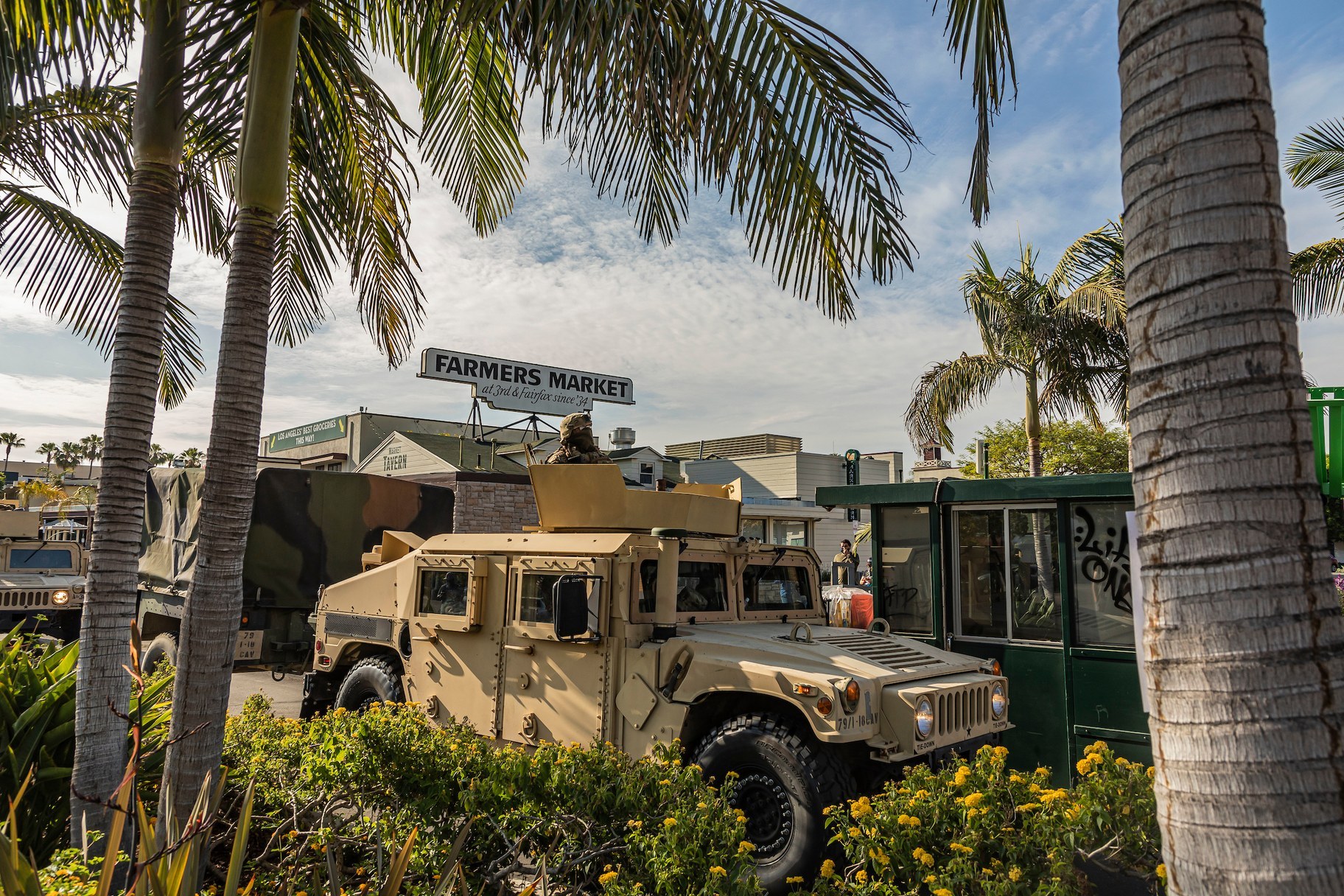 National Guard vehicles were parked nearby the Farmer’s Market near the Grove shopping center. Photo by Ted Soqui.

Soqui brings up a moment when he was at LA Mayor Eric Garcetti’s house, and there was a captain who took a knee with protestors.

“I couldn't get the shot. I mean, he was surrounded. But I've never seen that before. I mean, usually it's like, ‘Get back or I’ll hit you and arrest you.’ This is a captain of LAPD taking a knee with protests. It was emotional

How COVID-19 changes the job

“I'm scared to death of catching this thing because I may be able to survive, but my wife, she's an asthmatic. So I spend like 10 minutes every day before I come in and out, which may be three or four times a day, decontaminating stuff,” he says. “So I really have to choose things carefully when I go out now. It’s like, ‘Oh god.’ ”

Soqui says that when he sees a large crowd, his first thought is typically to use a wide angle lens. However, now he stands back and uses a 100-400 millimeter lens.

“It's totally changed the way I take pictures,” he says. 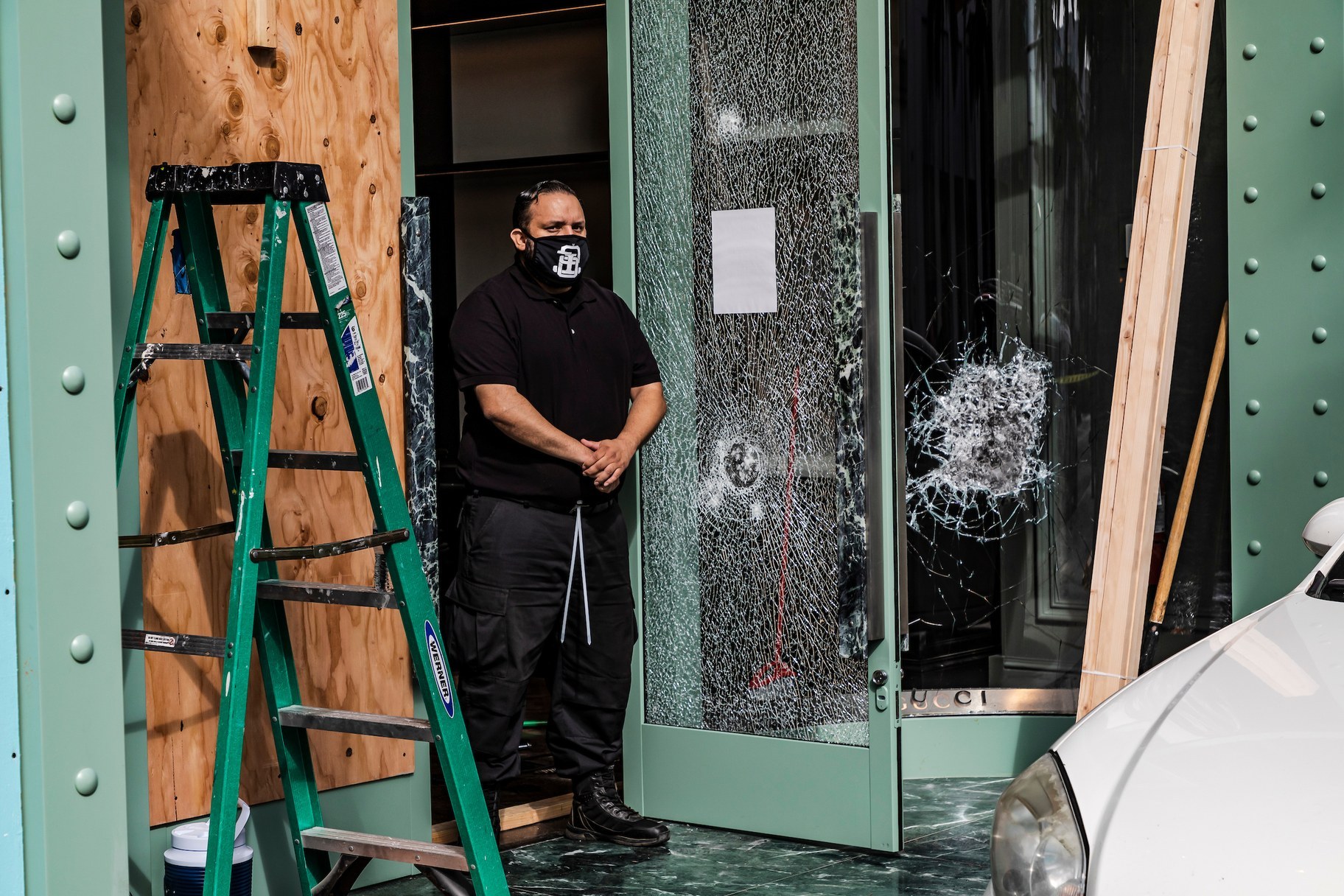