LA Philharmonic violinist Vijay Gupta recently won a MacArthur “genius” grant, which are for people who show “exceptional creativity in their work.” He’s known for launching Street Symphony, a nonprofit that brings classical music to Skid Row, homeless shelters, and the LA County jail. Gupta says the award is overwhelming, and comes at a vulnerable time -- during a big life transition. He explains that now, he can finally write his own rules and choose his own excellence. He didn’t have many choices as a kid, raised by Indian immigrant parents in New York. 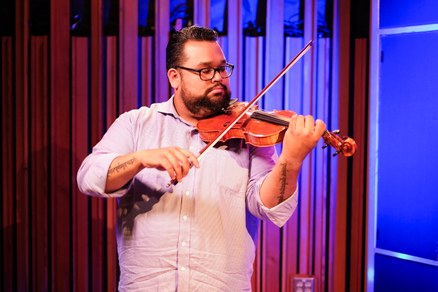 The state Department of Motor Vehicles started a new motor voter program in April. Californians applying for a drivers license or state ID automatically get registered to...

Challenging what we think we know about rent control

Proposition 10 would allow California cities and counties to expand rent control. But there’s a lot of disagreement over whether stronger rent control would help or hurt...

LA Philharmonic violinist Vijay Gupta recently won a MacArthur “genius” grant, which are for people who show “exceptional creativity in their work.”