Carissa Moore, backside slash at Cloudbreak during the Fiji Pro, 2016. Moore’s outstanding performances are only matched by her level of enthusiasm and kindness of spirit.
Photo by Tom Servai.

She spoke with sports journalist Graham Bensinger this year about it: “You just put yourself out there. And you might get lucky or you might get not. And there’s like this fine line — you want to be close to the fire, but you don’t want to catch on fire.”

Well, women have been doing incredible and dangerous things on waves for centuries. Polynesian princesses were believed to have been surfing big waves in the early 1600s.

A new book explores the history of women’s surfing from that time to today. It’s called “Women on Waves: A Cultural History of Surfing: From Ancient Goddesses and Hawaiian Queens to Malibu Movie Stars and Millenial Champions.”

Author Jim Kempton tells KCRW that as a surf historian, it only makes sense to also tell the story of women in the sport.

“I knew a lot of the women when I was the editor at Surfer [magazine], because there was very little coverage of them. … So I thought, ‘This is something that's never been done before. And it’s something that really needs to be done. These women really have done so much and have had so little written about them. And little did I realize that I was writing the history of surfing when I took the history of women's surfing on.”

He explains that in Polynesian culture, women were some of the earliest surfers. He shares the story of Princess Ka'iulani, who helped preserve the art of surfing during a time when missionaries who visited Hawaii were trying to outlaw its practice. 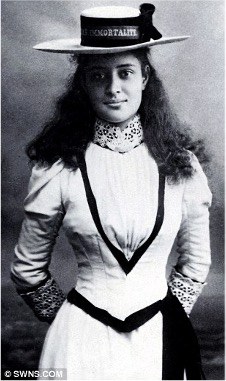 Princess Ka‘iulani, heir to the Hawaiian throne. She was an ardent and outstanding surfer. She helped preserved surfing during the period of near extinction, continuing to ride waves against the wishes of the missionaries. Photo courtesy of “Women on Waves.”

“The Polynesian culture talked about women surfers from the very, very beginning. And the royalty in Hawaii was pretty egalitarian when it came to surfing. Men and women surf side by side. They had lots of romances related to surfing and wave riding. And it was a very, very robust part of their culture.” 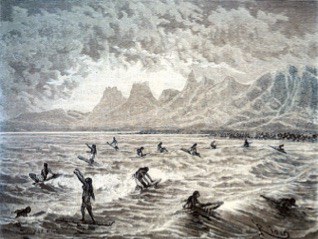 Early woodcut by romantic French artist E. Riou, which appeared in an 1873 travel anthology titled “Four Years in the Sandwich Isles.” Females of all ages, abilities and classes rode waves in traditional Hawaiian culture. Surfing women were seen as spiritually and physically powerful and commanded great respect in society. Credit: “Women in Waves.”

In the early 20th century, women were forced to wear conservative swimwear. That included woolen swimsuits that weighed as much as 40 pounds when wet. The immense weight even prompted drownings.

“Their bathing costumes weighed so much that they were pulled under. So surfing was one of the first places where women were able to say, ‘We need to have more adequate costumes that we can use athletically.’ And so they did so.”

As surfing rose in popularity over the decades, historical figures — such as writer Agatha Christie — were attracted to the sport. According to Kempton, she was one of the first Europeans to surf. 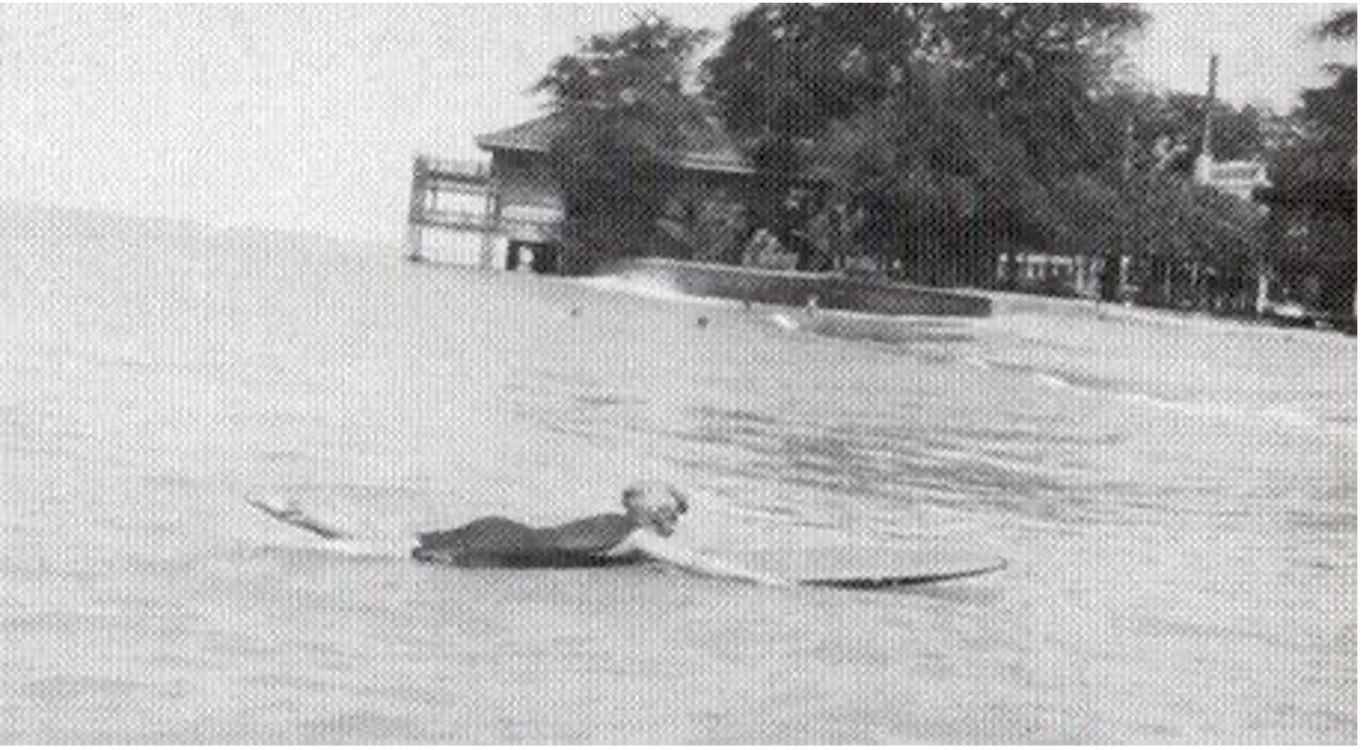 Agatha Christie, paddling for a wave in Waikiki, circa 1922. She wrote that surfing was “one of the most perfect physical pleasures I have ever known.” Image courtesy of The California Surf Museum.

“She actually surfed in South Africa. And then when she visited Hawaii on an around-the-world trip tour, she surfed in Hawaii and got completely addicted to the bug of surfing,” he explains. “She actually wrote about it quite extensively. It's a fascinating story. And she was an absolute aficionado of surfing. Loved it like nothing else.”

How surfing swam its way to California

Kempton says that surfing was initially introduced to Californians in the late 19th century, when Hawaiian royalty started surfing in Santa Cruz. Then Duke Kahanamoku went on a worldwide surfing tour, visiting countries like Australia and visiting U.S. states such as New Jersey and California, where he held exhibitions. 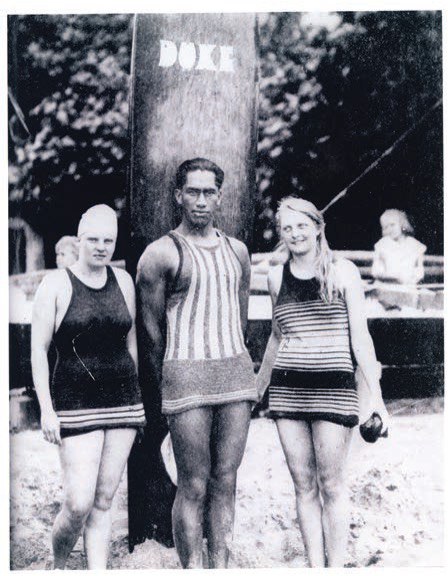 Duke Kahanamoku with surfing friends in Waikiki. All surfers in the early decades of the 20th century knew Duke. As Hawaii’s aloha ambassador, the five-time Olympic medalist was one of modern surfing’s earliest first-person observers of women’s surfing. Credit: “Women in Waves.”

Up until the 21st century, Kempton says that surfing culture has often been behind the curve. He uses the example of Hawaiian culture, where the big strong guys went out to surf while the beautiful women stayed on the beach.

“It really took a long time. Very surprisingly, I would have thought that the 60s would be a time [when] you have liberation with that, as well as everywhere else. But in fact, in surfing, it was way behind the curve. And it was ‘little surfer girl sits on the beach and gets a reward for the guy when he comes in.’ And the women that actually broke through those barriers had a lot of struggle.” 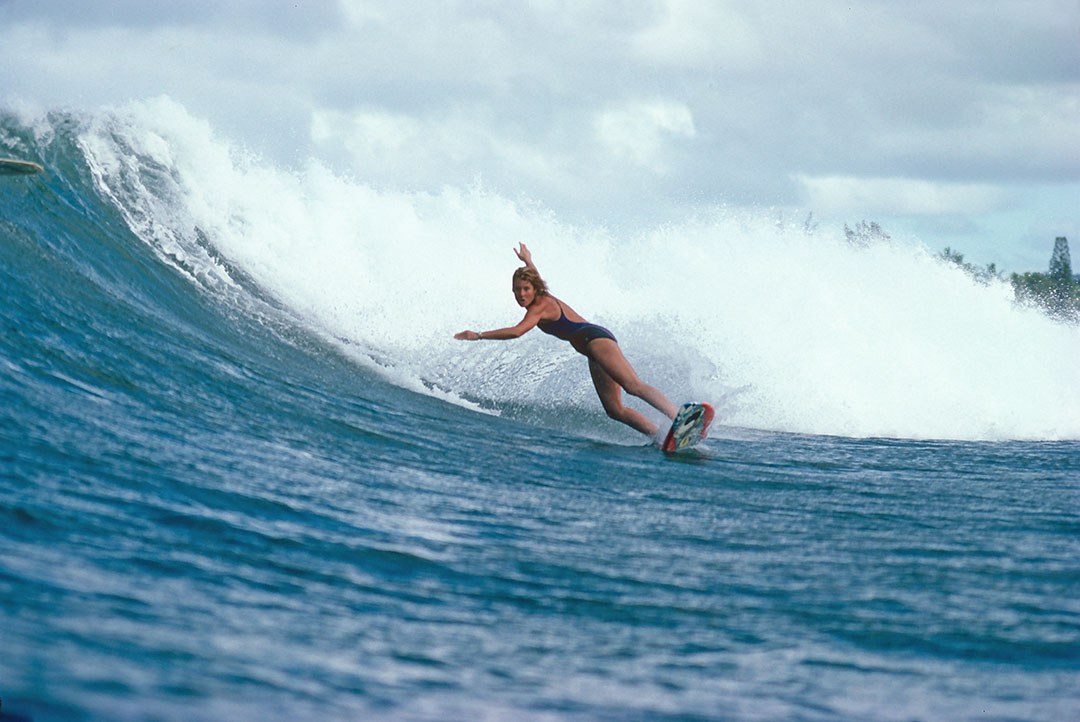 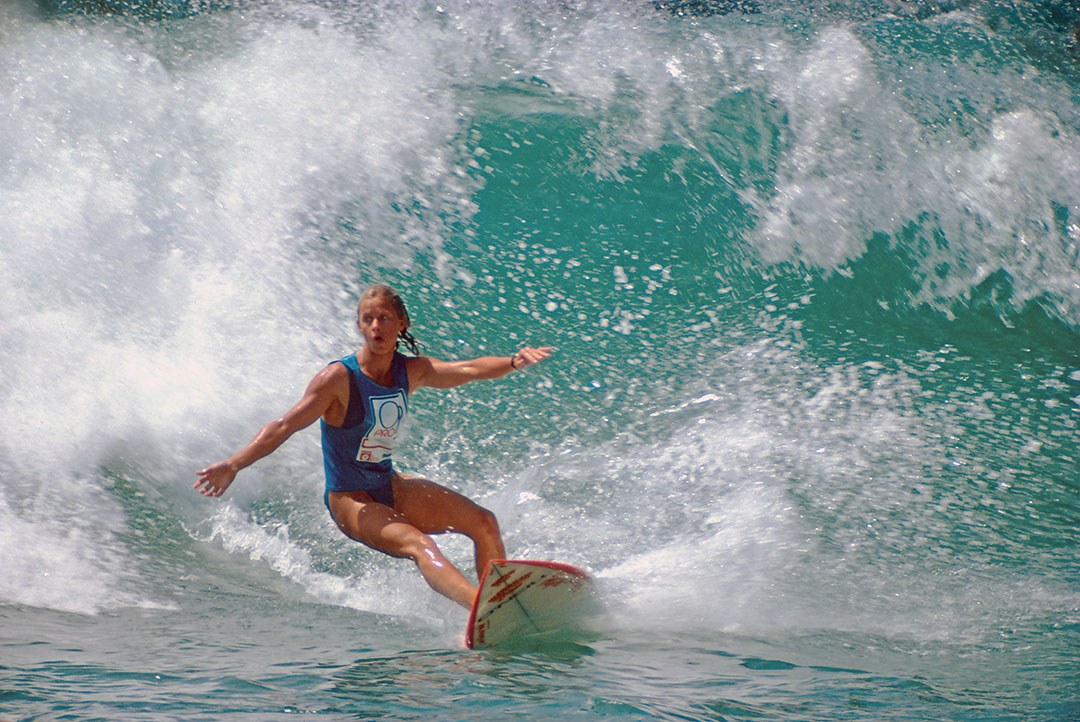 Frieda Zamba, Huntington Beach, CA, 1984. Hailing from Florida, Frieda Zamba won four World Titles. She set the stage for the string of strong, confident women and was a key link in the chain that connected the East Coast passion to its emerging competitive power. Photo by Jeff Divine.

Some women surfers refer to the 1970s as the “dark ages.” Kempton says that’s due in part to how women were viewed at the time.

“The crowds had become enormous and people weren't used to that. So there was a lot of friction in the water to begin with. And so women were kind of at a real disadvantage. And that's why they actually started in the middle of that decade — their own surfing association.” 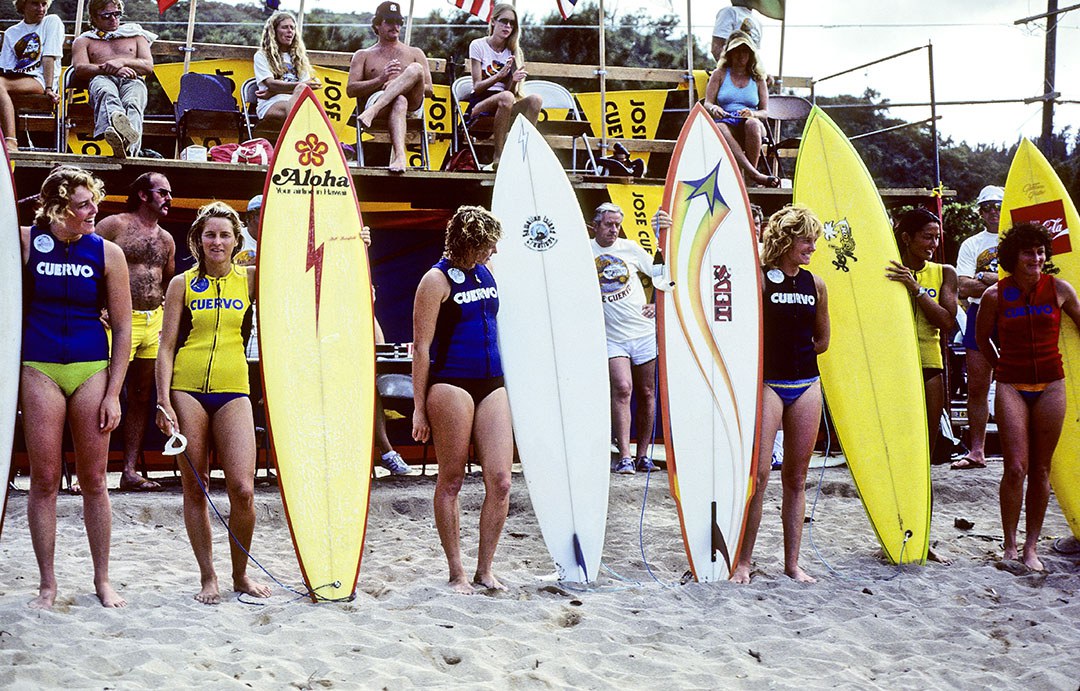 Kempton says one of the biggest breakthroughs for women in surfing came in the 1990s, with surfer Lisa Andersen. She became a big icon for companies like Roxy and Quicksilver.

“The founders of Roxy came up with this boardshort so that women like Lisa would not have to wear bikinis when they were trying to perform in really challenging surf. And Lisa helped push that. And suddenly Roxy became a $300 million company with women everywhere suddenly seeing that they could just have fun and not be intimidated by the surfing hierarchy.” 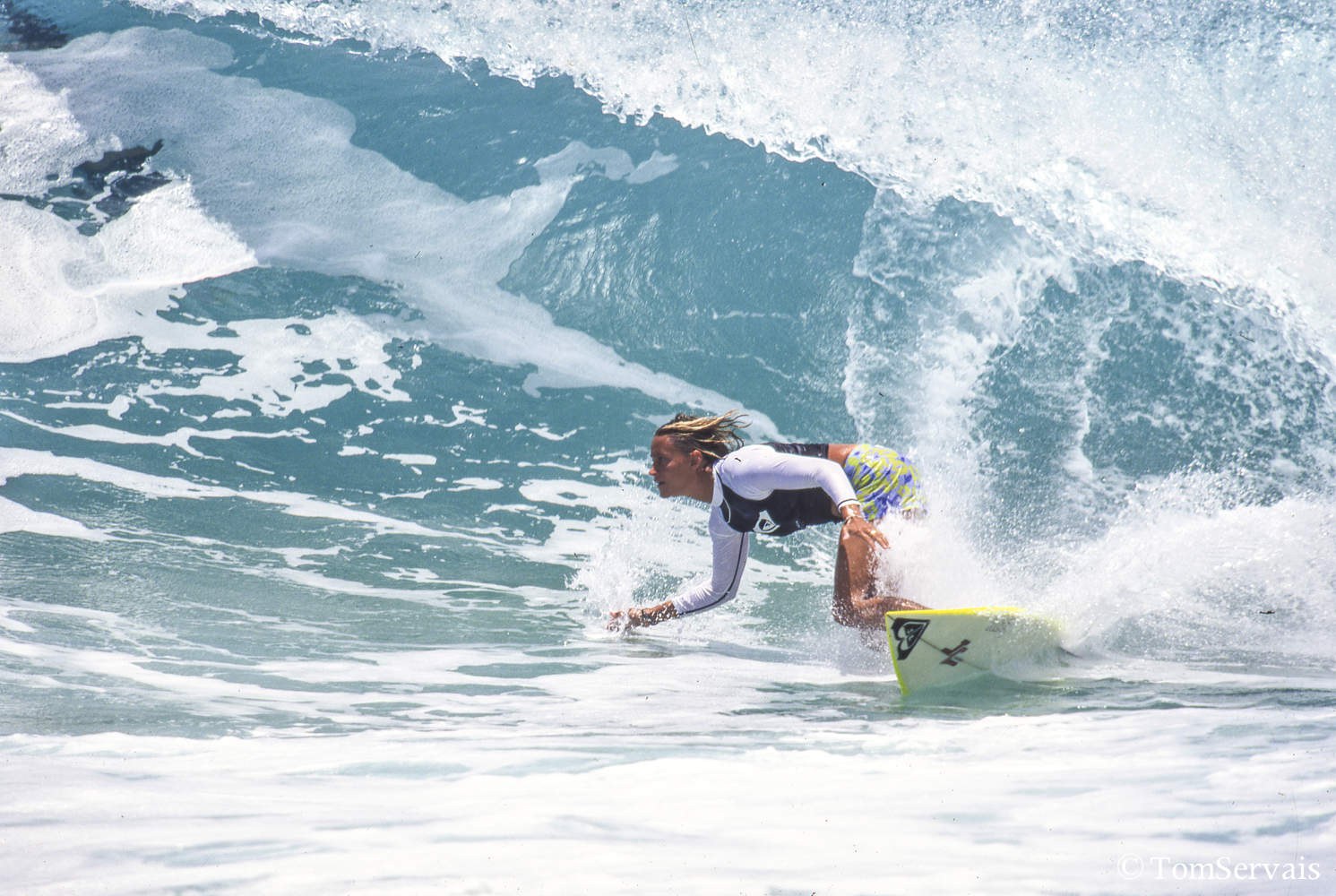 Lisa Andersen, Backdoor Pipeline 1997. A dominant figure in women’s surfing in the 90s, Andersen is credited with helping design and popularize women’s boardshorts and for raising the bar for performance surfing. Photo by Tom Servais.

Although prejudice against women still exists today, Kempton points out that women are dominating the surf scene and making impressive accomplishments. In 2020, the two largest waves were ridden by women: Maya Gabeira and Justine DuPont. Today, Gaberia holds a Guinness World Record for the largest wave ever ridden by a woman.

“A woman like Maya is not an anomaly. Keala Kennelly, Maya and Justine and dozens of other really incredible women are all out there now on the biggest days, taking the drops,” Kempton says.