Rossellini is pursuing a master’s degree in animal behavior. She tells Press Play she has found animals comical ever since she saw documentaries from David Attenborough or the National Geographic.

She started creating her own films 10 years ago, which have now evolved into monologues.

“I wanted to capture the fact that animals...they make me laugh… When we talk about animals and conservation…generally it's very sad. But I didn't want to add to that voice. Of course I'm part of that movement. But I wanted to spin it in a different way, to tackle it from humor and entertainment,” she says.

“I wanted to be a little dreamy, charming, funny. I want the audience to go ha ha ha ha because it's entertaining, but then also go, ‘Ah, I didn’t know that. That makes sense.’ ” 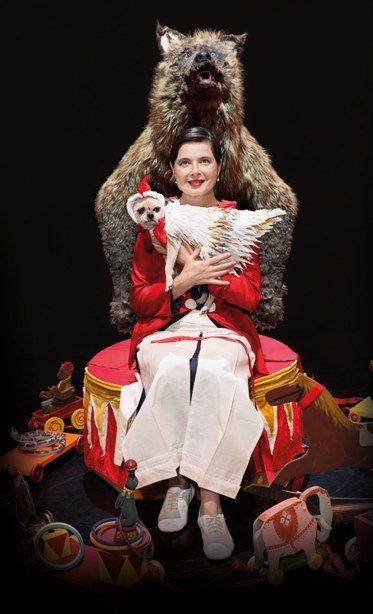 Rossellini says that when she was a little girl, she thought her cats and dogs could communicate with her -- that they had feelings and loved her. But she learned the scientific world was very cynical and didn’t believe animals could even feel.

She points to the behaviorist movement that was influential in the 1970s and ‘80s. “It said that thoughts and feelings are too private. And so what you can only describe is the behavior. A dog wags the tail right and left when the person that he sees every day comes home. We are not allowed to say, ‘Oh a dog, instead of smiling, wags the tail, and I know he's happy.’ That was considered taboo.”

She says now science has advanced -- we have machines recording animals’ thoughts, and we know they dream just as humans do.

What’s fascinating, she says, is we perceive the world differently. “A dog probably perceives the world to smell -- not so much from the eyes. They see movement -- things to us look like they are not moving at all. But they can probably not perceive as many colors as we do. Probably there is no difference in a dog between red and green… If we could be able to communicate with an animal, we wouldn't be able to understand each other because we perceive the world so differently.”

Rossellini suggests that through evolution, dogs have trained us to take care of them. She says as wolves started to live near humans, primitive men allowed non-aggressive wolves to stay, and they developed a bond through hunting.

“Maybe the primitive men wanted more of that kind of wolf. And so he made sure he had puppies. And he selected a pup. And little by little, he selected traits that he liked.”

She suggests that cohabitation led humans to adapt to them too. “Maybe the dog kidnapped the tender feelings we generally reserve for our babies -- for themselves.”

You can watch Link Link Circus at the Broad Stage January 25-27.