Comedian Mike Birbiglia on feeling lost, isolated, and reluctant when it comes to fatherhood Mike Birbiglia in “The New One.” Credit: Joan Marcus.

Mike Birbiglia never really wanted a kid. His reasons: His dangerous sleepwalking disorder, a belief that the world didn’t need more of himself in it, a general feeling that people (especially men) are not so great, concerns about his marriage and career. He thought kids would hold him back.

But now, he and his wife Jen have a 4-year-old daughter.

He shares his emotional journey in a new show called “The New One,” which is part stand-up comedy and part monologue. It’s going on now through November 24 at the Ahmanson Theater.

“The first half of the show is all the reasons why I never want to have a child, and I thought no one should ever have a child. Why would you bring a child into this world?” he explains. “Second half of the show is about how I had a child, and about how I was right about all those reasons. And then ultimately, the more emotional part is how I was wrong. But it only gives you that sense of how I was wrong for one glimpse… That was when our daughter was 13 months old. And from that point on, it's been actually so much better.” 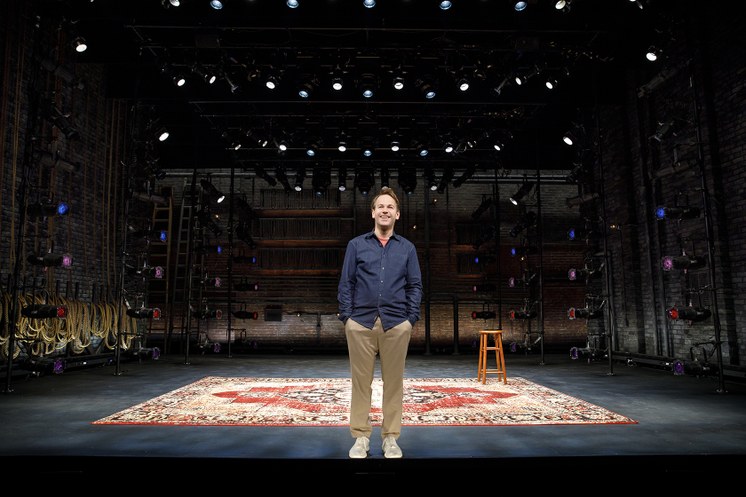 Mike Birbiglia in “The New One.” Credit: Joan Marcus.

One part of the show is about understanding why dads leave their families. Occasionally, viewers are put off, but they usually relate, Birbiglia says.

He shares one instance with Press Play: “This woman came up crying, or at least choked up… She was like, ‘Thank you for saying that part about I get why dads leave. That's so meaningful to me because that's my life.’ And that's actually the more common reaction.”

He adds, “Admitting something that's like a taboo thing that we don't want to talk about… I think can be more cathartic than not saying it.”

He says the show is heavily about what happens when you’re in a relationship, or even friendship, and another person enters. He gives an example: “The joke I make in the show is: The love between my wife and daughter was profound, it was the most profound thing I've ever witnessed, and I was there too… That’s the thing people relate to: feeling like you're on the outside of a thing that is special.”

That didn’t make him feel lost, but not resentful. He says, “It was hard for me because it was such a leap for me to get married. And then when we got married, I was like, ‘I want to be very clear. I never want to have a child.’ And Jen at the time was like, ‘Sure, I don't either’ or ‘I don't want to have one now.’ And then when eventually she was like, ‘I think we should have a kid,’ I started to feel a sense of loneliness because I was like, ‘Oh, we're on two divergent paths, and I'm so committed to the path we were on together.’ ”

He says in that sense, the show is about change, resistance to change, and isolation.

But now, having been a father for more than four years, he definitely thinks his life is better. “There's nothing I like more to do than spend time with my wife and daughter,” he says.

Some California cops: convicted of crimes, still on the job

How will the GOP defend Trump amid public impeachment hearings?

The impeachment inquiry enters a new public phase this week. Senior diplomats Bill Taylor and George Kent are scheduled to testify on Capitol Hill on Wednesday.

In California, if you’re a cop who’s been convicted of a crime, there’s a good possibility you can keep your job.

San Diego State University has suspended all 14 fraternities on campus after a student died. Dylan Hernandez was 19 years old. He was pledging Phi Gamma Delta.

Comedian Mike Birbiglia on feeling lost, isolated, and reluctant when it comes to fatherhood