Is Arpaio pardon a bad sign for the Mueller investigation? 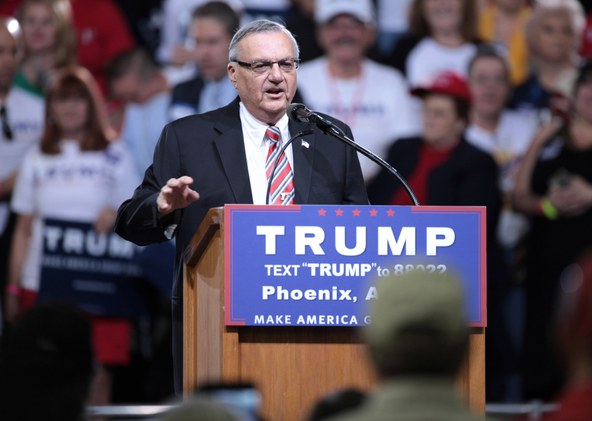 Sheriff Joe Arpaio speaking with supporters of Donald Trump
at a rally at Veterans Memorial Coliseum in Phoenix, Arizona.
Photo by Gage Skidmore

After years in office, Joe Arpaio lost his most recent election as Sheriff of Maricopa County, which includes Phoenix, Arizona. He was convicted of contempt of court for refusing to stop illegally detaining Latinos while still in office. But before he was even sentenced by a federal Judge, President Trump issued a pardon. Last Friday, he tweeted that Arpaio was "an American patriot" who "kept America safe." Mark Joseph Stern, a legal correspondent for Slate, discusses what this most unusual pardon could portend for the future.

America's fourth-largest city is under water

Friday evening, Hurricane Harvey hit Rockport, Texas with 130 mile-an-hour winds, essentially destroying a city of 10,000 people. Since then, the storm was downgraded, but...

Is Arpaio pardon a bad sign for the Mueller investigation?

Sheriff Joe Arpaio speaking with supporters of Donald Trump at a rally at Veterans Memorial Coliseum in Phoenix, Arizona.