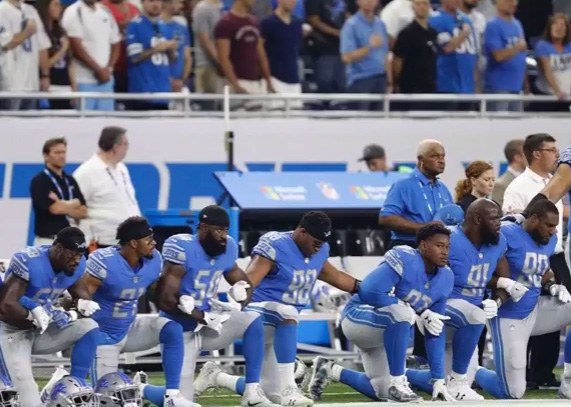 As he sang the last words of the national anthem before the Detroit Lions and Atlanta Falcons started to play, Rico Lavelle took a knee. When the Seattle Seahawks played the Tennesse Titans, both teams stayed in their locker rooms during the National Anthem. All around the National Football League, players — and even some owners — stood up to the President of the United States, who issued a challenge Friday night in Alabama. "Wouldn't you love to see one of these NFL owners, when somebody disrespects our flag, to say, 'Get that son of a bitch off the field right now. Out. He's fired. He's fired!' You know, some owner is going to do that. He's going to say, 'That guy that disrespects our flag, he's fired.'" Abby Phillip is a White House reporter for the Washington Post.

Can Trump undo the nuclear deal with Iran?

After yesterday's national election, Angela Merkel will still be Germany's Chancellor, but today she changed her tune a bit. Leadership of the right-wing Alternative for...

President Trump told world leaders at the UN that the nuclear deal with Iran and other nations was an "embarrassment to the United States." Iran's President Rouhani went...

As he sang the last words of the national anthem before the Detroit Lions and Atlanta Falcons started to play, Rico Lavelle took a knee. When the Seattle Seahawks played the...