Israel and the Palestinians: Trump says it's time for peace 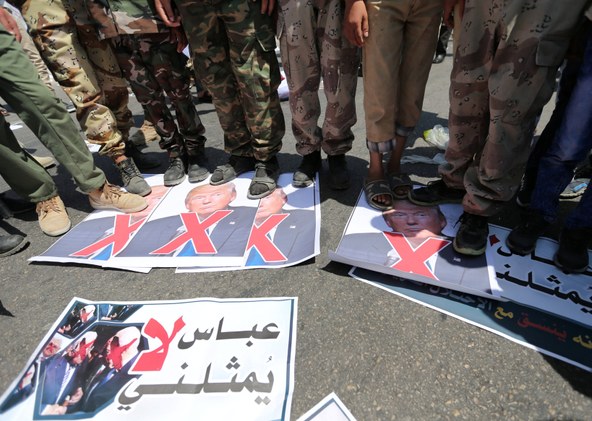 Palestinians step on posters depicting President Donald Trump during a
protest against the blockade on Gaza, in the central Gaza Strip May 2, 2017.
The poster reads, "Abbas does not represent me."
Photo by Ibraheem Abu Mustafa/Reuters

Even if Israel were pushing hard for a "two-state solution," the Palestinians are still divided among themselves. On his way to a White House meeting tomorrow, Palestinian Authority leader Mahmoud Abbas cut off power to Gaza, ruled by the militant group, Hamas. Meantime, Hamas has announced a new charter, less hostile to Israel but closer to the Authority than it's been before. Trump's first foreign visit since taking office may be to Israel — and the Territories. Will enough have changed that he can make a difference?

Future of the Palestinians as Trump welcomes Abbas

It's a day of diplomacy for Russian President Vladimir Putin. He sat down in person with German Chancellor Angela Merkel in Sochi, and he talked by phone with US President...

Israel and the Palestinians: Trump says it's time for peace

President Trump took office with no experience in foreign affairs. Now, he's addressing one of the world's most intractable land disputes of recent decades in an interview...

The latest on the battle to kill Obamacare

With Congress scheduled for another recess on Thursday, House Majority Leader Kevin McCarthy said this today about repealing and replacing Obamacare: "Now is not the time to...