Is Xi Jinping set to be the world's most powerful man? Mao Zedong, the founder of Communist China almost destroyed the country with one-man rule. After that, there was government by a consensus of leaders, until Deng Xiaoping became first among many. This week, President Xi Jinping was elevated to similar status -- with his name in the Constitution like Mao's and Deng's. In an address to the Party Congress, Xi cautioned, "We must continue to rid ourselves of any virus that erodes the party's fabric and make great efforts to foster a healthy political environment of integrity and generate waves of positive energy throughout the party." 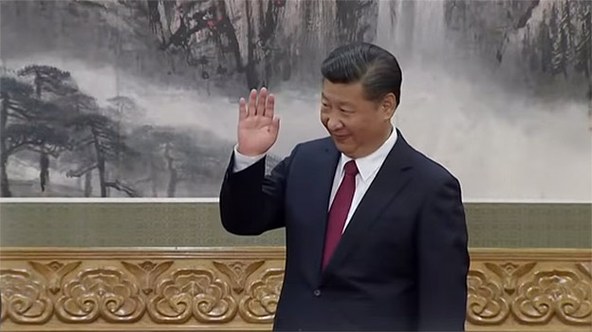 China's President Xi Jinping waves after addressing the a meeting with the media
at the Great Hall of the People in Beijing, China October 25, 2017.

What will President Trump need to know when he goes there next week? We speak with Max Baucus, the former US senator who became Barack Obama's Ambassador to China.

Late last night, Vice President Mike Pence broke a tie vote in the Senate, which sent a measure to President Trump eliminating a rule by the Consumer Financial Protection...

Is Xi Jinping set to be the world's most powerful man?

Mao Zedong, the founder of Communist China almost destroyed the country with one-man rule. After that, there was government by a consensus of leaders, until Deng Xiaoping...

How long should OC supervisors be able to serve? Greater LA

What will public spaces look like post-pandemic? Press Play with Madeleine Brand