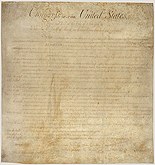 Today the US Supreme Court heard arguments that have been percolating for more than 200 years on the meaning of these 27 words: "a well-regulated militia, being necessary to the security of a free state, the right of the people to keep and bear arms, shall not be infringed." The case was brought by a private security guard who guarded a federal office building and wanted the right to take his revolver home at the end of his shift. "They give me a gun to protect them," Dick Heller says of the government, "but I'm a second-class citizen when I finish work." Attorneys seek to overturn the ban on registering handguns in the capital, the ban on having a concealed weapon at home and the requirement that any licensed riffles or shotguns stored at home be unloaded and locked. Does the Second Amendment grant each of us an uninfringeable right to bear arms or was it intended to provide arms only for a well-regulated militia?

Gun Battle in the US Supreme Court

Obama Speaks on Race and His Pastor

Today in Philadelphia, Senator Barack Obama repeated his objections to the controversial sermons delivered by Rev. Jeremiah Wright , the former pastor of his Chicago...

Dalai Lama to Step Down if Tibet Gets 'Out of Control'

It was 50 years ago last week that the Dalai Lama fled Tibet , an anniversary that has been marked by deadly protests inside the country.

Today the US Supreme Court heard arguments that have been percolating for more than 200 years on the meaning of these 27 words: "a well-regulated militia, being necessary...