In the French election, globalists vs. nationalists On Sunday, French voters will choose between Marine Le Pen and Emmanuel Macron in a unique presidential election. For the first time, neither candidate represents one of the major parties that have led the country before. And the two have radically different visions. Macron is for globalization and European integration. Le Pen is a nationalist, representing the kind of discontent that led to Brexit and the election of Donald Trump. 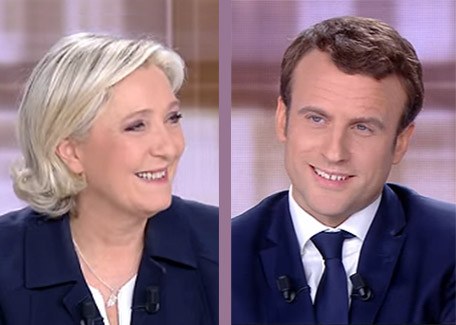 We start there with a writer, speaker and editor who says, "An epochal change is coming, a transformational tsunami is on the horizon." He's David Rothkopf, CEO and editor of the FP Group, which includes Foreign Policy magazine. His latest book comes from a Ted Talk on "The Great Questions of Tomorrow."

The Altons: ‘When You Go (That's When You'll Know)’ Today's Top Tune Aug 3

Is the United States losing its moral authority in the world?

America's moral authority: Is it credible?

Promoting human rights and democratic values is part of America's "brand" — a crucial part of its "leadership of the free world." There's always been an element of...

In the French election, globalists vs. nationalists

On Sunday, French voters will choose between Marine Le Pen and Emmanuel Macron in a unique presidential election. For the first time, neither candidate represents one of the...