Tomorrow, Mexico will inaugurate its newly elected president without either much fanfare or political protest. Enrique Peña Nieto, who won with a plurality of just 38 percent, will preside over an economy full of potential but held back by corruption, poverty and a drug war that's killed 60,000 people. The US has poured $2 billion into that conflict, but it rages on. Will Peña Nieto look for changes after marijuana legalization in two American states? What about illegal immigration? Are tough new border restrictions making it harder to implement NAFTA and the promise of prosperity for this country's nearest neighbor? 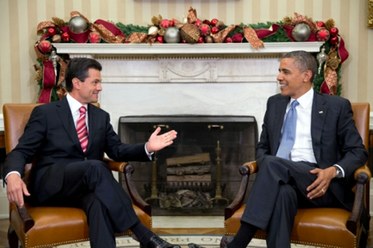 Mexico Gets a New President

Tomorrow, Mexico will inaugurate its newly elected president without either much fanfare or political protest. Enrique Peña Nieto , who won with a plurality of just 38...

Yesterday, the General Assembly gave the Palestinian Territories new status at the United Nations. Opposition, including that of the US, mustered just nine voters against...