As we go to air, it's been roughly 48 hours since Mexico City was hit by a massive earthquake -- 32 years to the day since a previous tremor destroyed much of the city. At least 230 people have died. 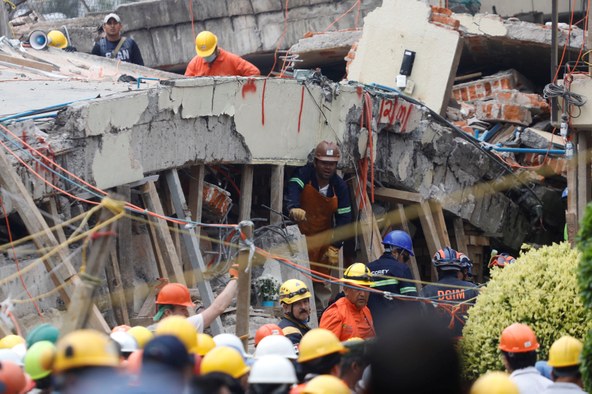 Rescue workers search through the rubble for students at Enrique Rebsamen school
after an earthquake in Mexico City, Mexico, September 20, 2017
Photo by Edgard Garrido/Reuters

Kate Linthicum, who is in Mexico City for the Los Angeles Times has reported on a "gesture of hope, solidarity and resilience" during the effort to locate survivors. We hear from her and from former Mexican congressman Carlos Heredia, now a professor at CIDE in Mexico City.

President Trump today announced new authority for economic sanctions on North Korea and other nations that do business with that country. He was at the UN, sitting next to...

Paul Manafort's in the hot seat. Who's next?

It's reported that, while he was chair of Donald Trump's presidential campaign, Paul Manafort offered to brief a Russian oligarch close to Vladimir Putin. That's just the...

As we go to air, it's been roughly 48 hours since Mexico City was hit by a massive earthquake -- 32 years to the day since a previous tremor destroyed much of the city. At...