Who's afraid of the Americanization of English? 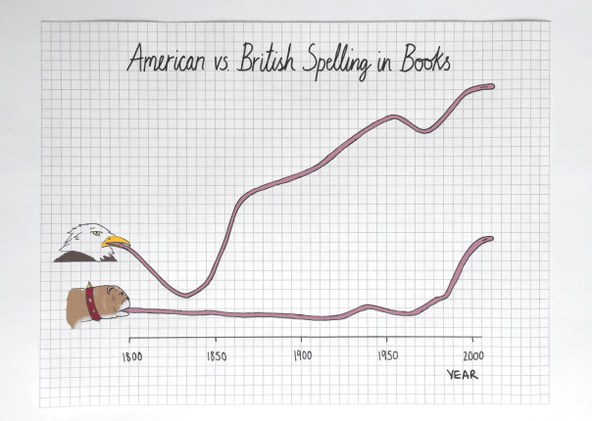 The evolution of the English language in books: Yankees one, Brits 0
Illustration by Mona Chalabi / Data: Gonçalves et al. 2017

There's a new book creating a stir in the United Kingdom, That's the Way It Crumbles: The American Conquest of English. As the vote for Brexit suggests, there's a nationalist trend in that country — and an argument that British and American English are two separate languages that ought to stay that way.  Rebecca Rideal disagrees, based on her studies as a historian of 17th Century England, when English settlers started coming here to the New World.

The Washington Post reports that North Korea has crossed “a key threshold on the path to becoming a full-fledged nuclear power.” It's miniaturized a nuclear warhead so it...

Who's afraid of the Americanization of English?

The evolution of the English language in books: Yankees one, Brits 0 Illustration by Mona Chalabi / Data: Gonçalves et al.