Trump likely to pull US out of Paris Climate Agreement 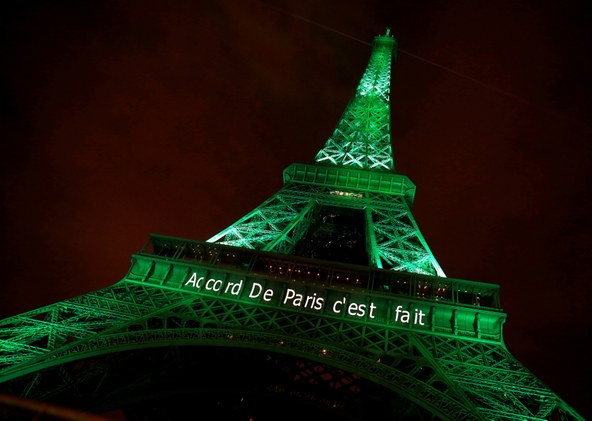 Syria and Nicaragua are the only nations that have refused to be part of the Paris Agreement on Climate Change. The only other holdout — Uzbekistan -- got on board last month. But just last month, President Trump called it too costly for America. "It's estimated that full compliance with the agreement could ultimate shrink America's GDP by $2.5 trillion over a ten-year period that means factories and plants closing – here we go again. Not with me folks!" Trump has reportedly decided to make good on that promise, after completing a round of meetings with his divided cabinet. We hear what that could mean for international relations, America's leadership role in the world — and the effort to put the brakes on climate change. What's in store for America's economy and the creation of jobs?

Photo: The Eiffel tower is illuminated in green with the words "Paris Agreement is Done," to celebrate the Paris UN COP21 Climate Change agreement in Paris, France, November 4, 2016. (Jacky Naegelen/Reuters)

At least 90 people were killed in a bombing in Kabul

At least 90 people were killed and 400 wounded today -- including 11 Americans -- in Kabul, Afghanistan. A very powerful bomb exploded near foreign embassies in the midst...

Trump likely to pull US out of Paris Climate Agreement

Syria and Nicaragua are the only nations that have refused to be part of the Paris Agreement on Climate Change. The only other holdout — Uzbekistan -- got on board last...

Civil rights aren't just the province of the Department of Justice. Other parts of the government have offices to deal with related issues, too. The Washington Post is...