The price of oil and economic sanctions have panicky Russian consumers rushing to buy whatever they can as the ruble loses its value, but at today's three-hour, end-of-the-year news conference, Vladimir Putin said, not to worry: the crisis will only last a couple of years.  He blamed the US and Europe, said the Russian bear won't be chained up -- saying he was referring to nuclear weapons. 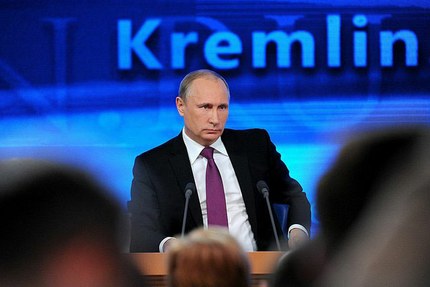 We look at what might be in store for Ukraine and at the role of Saudi Arabia in Russia's economic decline.

Vladimir Putin: Is it the Economy, Stupid?

The Obama Administration is suing New York City over what the Justice Department calls a "deep-seated culture of violence" at Rikers Island, a prison where adolescent...

The price of oil and economic sanctions have panicky Russian consumers rushing to buy whatever they can as the ruble loses its value, but at today's three-hour,...

The Fallout from the Sony's Retreat

After a massive cyber-attack, Sony Pictures received a threat of violence at showings of The Interview — a comedy that shows the assassination of North Korean leader Kim...