For instance, Patrick Henry, the guy who’s known for saying Give me Liberty, or Give Me Death -- he tried to use it to sink James Madison’s run for congress back in 1788.

So the fact that Republicans have been busy redrawing district lines ever since 2010 when President Obama was two years into his first term, would appear to be nothing new… It’s just politics as usual.

Except that it isn’t. Journalist David Daley says redistricting has reached a level of sophistication so precise that it precludes democracy -- and hardly matters who the candidate is anymore. 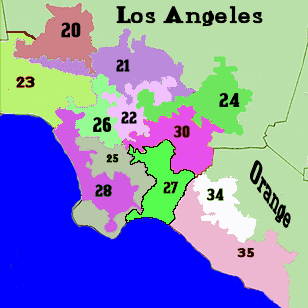 "The odd shapes of California Senate districts in southern California (2008) have led to complaints of gerrymandering."
Photo: Wikicommons